Wabash Men: Your Time Is Now

Jim Amidon —Tracy Sugarman was having lunch with a small group of Wabash College students last Thursday and discussing his book, We Had Sneakers, They Had Guns: The Kids Who Fought for Civil Rights in Mississippi, when one student asked him why he wrote the book 45 years after the Freedom Summer of 1964.

Sugarman was not measured in his response.

“Because we do a lousy job of teaching history in America,” he said emphatically. “We’ve allowed that period of our history to slip.”

I was slightly taken aback by the firmness of his answer. He looked into the eyes of the young Wabash men and said, “You didn’t know anything about Charles McLaurin, Fannie Lou Hamer, or me before we came to campus this week.

“The great legacy of Charles McLaurin and the civil rights movement is the history, written in the blood of young people who dared to stand up and demand change. That movement created a climate for change everywhere around the world; people everywhere learned to organize for change.”

Then he laid it out in no uncertain words: “A lot of this is like mythology now.”

The 89-year-old author and internationally recognized artist and illustrator has lived through his fair share of American history — from storming the beaches at Normandy, fighting for justice for black citizens of Mississippi, to chronicling in words and drawings the horrors of 9/11.

But he’s determined to make sure that his grandchildren — the young people of America today — know the sacrifices their parents and grandparents made in the violent, turbulent summer of 1964.

Sugarman and his dear friend McLaurin were invited to Wabash to help celebrate the life and legacy of Dr. Martin Luther King, Jr., but also to kick off a series of events to mark the 40th anniversary of the founding of the Malcolm X Institute at Wabash.

McLaurin’s history is no less rich or fascinating. He was 19 when he signed on with the Student Nonviolent Coordinating Committee and 20 when he was named director of the summer project in Sunflower County, Mississippi.

It was in Ruleville where McLaurin managed to fill an entire church with African Americans as a first step in organizing them to register to vote and to attend Freedom Schools. That evening, the young McLaurin had a face-to-face confrontation with an armed “bully” police officer, who refused to leave the church. McLaurin stood his ground amid chants of “Go, Go, Go,” and eventually other police officers escorted the bully from the church.

It was the first time anyone in that town had ever seen a black man confront a police officer, and it was a major milestone in the fight for freedom. The events are chronicled in great detail in Sugarman’s gripping book. 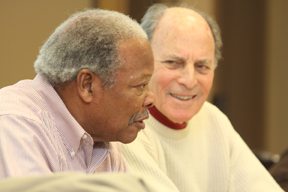 And there was McLaurin — sitting in Wabash classrooms, sharing his stories with Wabash students, most of whom were born after 1990. To them, the civil rights movement is ancient history or, to use Sugarman’s word, “mythology.”

Yet McLaurin, “a foot soldier for freedom,” and Sugarman, “a messenger of the civil rights movement,” did not dwell on the past or on the violence, beatings, and intimidation.

They laughed as they shared fond memories of relationships between white college students from the north and the black citizens of the Mississippi. They laugh and live in grace today because they have learned to forgive.

But the strongest messages they directed at the Wabash students focused on change. They said the single biggest lesson to take from the summer of 1964 is that young people, when motivated and focused on a common goal, can accomplish anything.

They said the goal doesn’t matter — rights for people of color, gays, women, the environment; what matters, they said, is commitment.

“Change is important and it doesn’t happen if young people don’t demand it,” Sugarman said. “People pay dues and are willing to invest their lives in things they believe in. It isn’t a matter of ideology; it’s a matter of commitment.

The three-day visit to Wabash by McLaurin and Sugarman was unforgettable. This community got to learn history by men who made it. This community was inspired to take from that history the great lesson of possibility; the possibility for committed people to change the world.

Then, in closing, Sugarman said farewell: “It’s time for my generation to shut up and get the hell out of the way. Your time has come.”