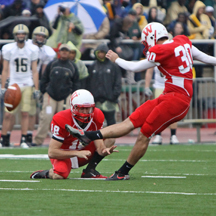 Wabash and DePauw had traded punches on the first three drives of the game, but on their second series, the Little Giants had reached the edge of Whitehead’s field goal range. In games earlier in the season, Coach Raeburn might have elected to go for it on fourth down and four, but in the Monon Bell Game — even in rotten weather conditions — Raeburn elected to try to get the game’s first points on the scoreboard.

Senior Kyle Grand made a perfect snap to senior holder Josh Miracle. Whitehead strode into the kick and booted the football through the west goal posts and Wabash had taken a 3-0 lead against the undefeated, 9-0 Tigers.

At the time — with 54 minutes of football remaining and weather conditions deteriorating — the three points seemed trivial at best. DePauw’s high-powered offense averaged 33 points per game through the season.

It seemed simply unfathomable that Whitehead’s kick would be the only points the Little Giants would need to knock off the Tigers, retain the Monon Bell for the second straight year, and finish the injury-plagued season 8-2. 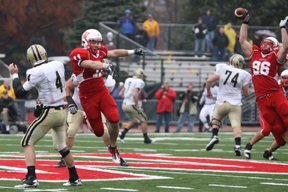 And yet, those three points were all the Little Giant defenders needed. They blitzed, chased, and rattled DePauw’s talented senior quarterback, Michael Engle, who was forced to throw off his back foot time and time again.

Senior linemen Nick Ramsey, J.D. McClintic, Zach Brock, and Jake Kolisek, along with senior linebackers Dan Ryan Wood, C.J. Gum, and Deonte Singfield, eliminated DePauw’s running game — entirely. By early in the third quarter, every Wabash senior had made it clear that the only piece of unfinished business was the final score.

There are myriad clichés about the Monon Bell Classic — throw out the records, anything can happen, unsung heroes rise up. But few in the record-sized crowd of over 11,500 hearty fans could have predicted a blowout of such large proportions. Wabash dominated in every phase of the game, including coaching, en route to the third largest scoring margin in the 117-year history of the rivalry. 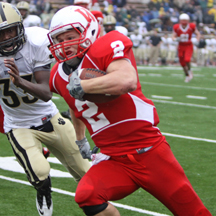 Few would have predicted that senior running back Derrick Yoder would save the best game of his Wabash career for the Bell Game. Yoder had been knocked around for being too small and not durable enough, but nobody in the stadium played any bigger than he did — lowering his shoulder time and again for extra yards. Yoder’s 164 yards rushing were nearly twice the total offense generated by the entire DePauw team.

There wasn’t a soul in the stadium who would have bet that DePauw’s All-American receiver, Alex Koors, would go without a catch in the first half and be a non-factor in the game.

Nobody would have guessed that Raeburn’s decision to go with the alternating quarterback combo of Chase Belton and Tyler Burke would do anything but blow up in his face. Instead, both Burke and Belton shined brilliantly in a game when the sun never did.

Burke galloped 14 yards up the middle and dove into the end zone late in the first quarter for the game’s first touchdown. Shortly before halftime, Belton found senior Geoff Wright wide open for a 23-yard touchdown strike. That made it 19-0 at the half and it had become obvious that Wabash was not letting go of the Monon Bell.

The quarterbacks combined to throw for over 200 yards and four touchdowns, and seemed to have DePauw’s defense completely off balance.

When Coach Raeburn selected to go for it on fourth-and-14 early in the third quarter, Burke arced a bomb to Brady Young — for the first down and a 36-yard touchdown. DePauw’s hopes for a second-half comeback were dashed when Young walked into the end zone. 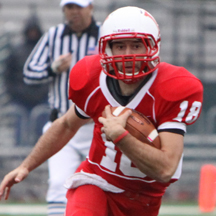 Josh Miracle, Wabash’s gritty, four-year backup quarterback, engineered the offense for most of the fourth quarter. He and fellow senior Tommy Mambourg each rushed for 39 yards in the game’s final minutes, allowing them a satisfying end to their careers.

It has been decades since either Wabash or DePauw enjoyed such a one-sided victory, which is even more unusual since both teams appeared so evenly matched on paper.

The credit goes to Wabash’s seniors and coaches, who were denied the Bell in 2007 and 2008. The senior captains said in Chapel on Thursday that the Bell would stay in Crawfordsville, and on Saturday they made good on that promise by turning in the most dominating performance in modern Monon Bell history.