Skatepark a Triumph for Westphal, Crawfordsville

Jim Amidon — Saturday’s dedication of the Milligan Skatepark was a triumph on every level.

As hundreds gathered to watch a small committee of dedicated citizens cut a ceremonial red ribbon to open the park, the sun rose above a large bank of trees on the southern edge of Milligan Park. The entire 8,000-foot concrete skatepark was bathed in late-morning sunshine.

It seemed like a very, very long time ago when a city ordinance drove skateboarders out of downtown, off the sidewalks, and away from parking lots.

It seemed like a very, very long time ago when Karen Cushman, Sheridan and David Hadley, and a handful of people organized and sent out a mailer asking the community to support a park that would be dedicated to skateboarders, inline skaters, and BMX bikers.

And still, only a few people thought it would be possible to raise nearly one-quarter of a million dollars to plan and build the park… without using public money at any level.

Meanwhile, the kids who used to skate down near the courthouse grew older, moved away, tossed out their Vans board shoes. A few hung on to the dream and worked with the committee to design, refine, and create the plans they hoped might someday become reality.

A young Wabash math professor — in his first year at the College — joined the committee. Turns out that Chad Westphal was one of those same kids with the funny shoes and baggy jeans. Turns out Chad Westphal — even after completing his Ph.D. in mathematics — still is one of those same kids who gets thrills out of gliding over smooth concrete, up embankments, and sometimes crashing in spectacular fashion.

The skatepark became Westphal’s passion. Suddenly the committee had an adult member with skateboarding on the brain — and a vision for a park that was attainable.

Money began to come in — slowly — from private donors, Kiwanis, Youth Services Bureau, and the Montgomery County Community Foundation, among many others. By last summer, it became clear that a skatepark would finally be built in Milligan Park.

So, at a little after 11 a.m. on Saturday morning, Mike Scime stood on a concrete embankment wearing a jet black t-shirt that read, “I helped build the Crawfordsville Skatepark.” As at least 100 kids with skateboards, bikes, rollerblades, and even razor scooters watched, Scime thanked the volunteers, donors, and foundations who saw the project through, start to finish.

Then he looked down at the kids and thanked them for their patience and inspiration.

Moments later, Scime, Sheridan Hadley, Cheryl Keim, Westphal, and Karen Cushman stood behind the red ribbon. They handed the scissors to a skater named Trevor Metcalf to have the honor of officially dedicating the park.

It was the committee’s desire to have one of the kids who inspired the work open the park to the public. And for Metcalf, the moment was especially sweet. He and his family moved to Michigan not long ago, but they woke at 3 a.m. on Saturday to make the drive so that he could be in Crawfordsville when the Milligan Skatepark was finally opened.

You could say that Trevor was “head over heels” with excitement. After Westphal declared the park officially open, the bowls, tubes, stairs, flat-tops, and rails were flooded with kids from probably five years old to 25 (plus Westphal). 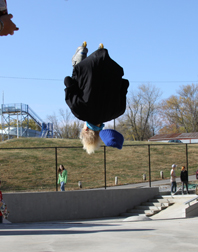 Metcalf strapped on his inline roller blades and took off. Starting at the north end of the park, he got up a head of speed, and took off toward the “Westphal Tube.” As he gained full speed, a wide smile crept across his face. He started up the steep embankment on the south edge of the tube, shot up like a rocket, tucked his legs under his body, and completed a full revolution before landing with a thud and a thump hard on the concrete edge.

It was a hard fall; the kind of fall that made this 45-year-old reach for his cell phone to call 911. But Metcalf was fine. In fact, he was laughing as he spread across the freezing concrete. He had gotten through the full revolution in the air and he had landed on both blades, slamming hard on his rear end.

With his friends and fellow skaters surrounding him, he jumped to his feet (blades) and shouted, “I’ve got this” as he headed back to the other side to try the trick one more time.

“What I Was Meant to Do”
Seniors Ring the Bell

2 comments on “Skatepark a Triumph for Westphal, Crawfordsville”