Under a Shady Tree

I wandered around campus today attempting to find something “new” to photograph in the splendid Fall color we’re experiencing right now (see here). However I was feeling rather uninspired.

I have a particular route I tend to follow when I go out on these photography excursions (perhaps that’s part of my problem) that begins going out the back door of Kane House toward MXIBS and the Allen Center then through the south side of campus to Fine Arts, north on Grant Avenue, through the arboretum, then finally through the mall. 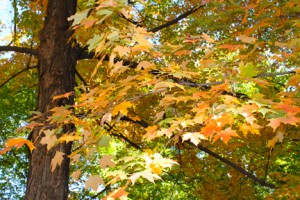 I remembered my first official trip through the arboretum three years ago just a few weeks after I started at Wabash. There was a young man “studying” (sound asleep) under one of many quiet giants shuffling in the breeze. I shot a couple photos of him and moved on. But today I thought back about that day and wondered how many other young men had studied under that shady tree.

I just finished a project that will be hitting mailboxes shortly before the Bell Game in November. It’s an exciting announcement about The Bachelor. During the design phase of the piece I spent a lot of time searching for just the right clip of The Bachelor to include as part of the artwork.

In putting that piece together, I met several young men from generations ago through their writing as they developed their voices, their passions, and their perspectives under those trees.

Then I started having an “if these trees could talk” sort of moment thinking about all the young men turned older who have made up the face of this campus – doctors, lawyers, politicians, business owners, pastors, fathers, husbands, and friends who “grew up” under the protection and guidance of the “shady tree” that is Wabash.

To the untrained eye, they just look like leaves set to change color and fall to the ground, only to be replaced in the spring with a new greener leaf to take on the charge of providing shade. I see professors who go to great lengths to challenge young minds to be better and think bigger. I see staff that go out of their way to nurture and guide. I see coaches who care more about character than points in the paint or third-down conversions. I see alumni who lead by example with their gifts and their time so the next generation of men among the trees can learn from the best to be the best.

They don’t disappear in the Fall. They aren’t replaced. They may no longer be with us on campus physically but they’ll always be part of the soil that gives the new leaves life. Part of the network that works together to provide the shade this year, next year, and for many to come.

Hmmm… all that from a few yellow leaves and a simple song.

I guess my walk on this beautiful Fall day wasn’t so uninspiring after all.

Gentlemen of Note
“What I Was Meant to Do”