Jim Amidon — I had just come out of a meeting Thursday morning and was frantically trying to respond to about two-dozen emails that arrived in the hour I was away from my desk. At about 9:35, Wabash English Professor Warren Rosenberg called me to tell me about a unique panel discussion that I wouldn’t want to miss. 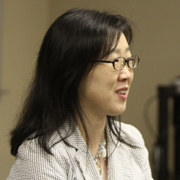 The panelists: Six members of the Wabash faculty who have at some point in their lives been immigrants.

The time: Ten minutes from the moment I hung up with Professor Rosenberg!

I recalled a similar collaboration a few years ago that produced some wonderful stories, photos, and classroom experiences, so I grabbed a camera and notepad and took off for Detchon Hall. 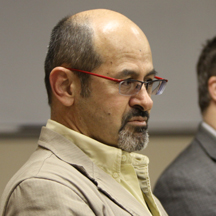 When I got there I found three different classes all studying — in various ways — the topic of immigration. And what better time for Wabash students to be discussing the myriad issues surrounding immigration than now — when so much is being written about sealing our borders and tightening already difficult immigration standards.

Sitting in front of the roughly 45 students were professors Gilberto Gomez (Spanish), Peter Mikek (economics), Christie Byun (economics), Sam Rocha (teacher education), Agata Szczeszak-Brewer (English), and Jane Hardy (Spanish). After each professor talked about his or her experiences immigrating to (or from) the United States, the panelists took a range of questions from the students.

It was fascinating to listen to each person describe their feelings about immigration.

For Professor Szczeszak-Brewer, the decision to migrate from her native Poland was very difficult because of the closeness of her family. And if her American-born husband could have spoken better Polish, they probably would have ended up in her home country.

“In my case, I wondered if I could define myself outside my family and my community,” she said. 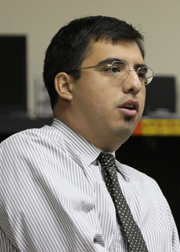 Professor Rocha was born in “the Valley” of South Texas in Brownsville. For generations, his family owned horse ranches near the border. When his parents moved to Mexico as missionaries, Rocha was, technically, an illegal immigrant, where he felt prejudice because he was too “Anglo.” When the family returned to Texas, the prejudice returned — this time because he was too Hispanic.

“When you live in the Valley, you speak Spanish,” Professor Rocha told the students. “But if my family was told to go ‘home,’ we would go north.”

Professor Hardy is a United States citizen married to Professor Mikek, who is Slovenian, and their two sons have dual citizenship. But for a short time, she lived and worked in Spain, and she later lived in Slovenia for five years.

“After living outside the United States, when I came back I had this feeling like I didn’t fit in,” Professor Hardy said. “I was aware after being away that I had changed and my identity had shifted.”

Professor Gomez agreed. “Being an immigrant gives you the proverbial double vision… For those of us who move back and forth, we develop an ability to see things from multiple perspectives.” 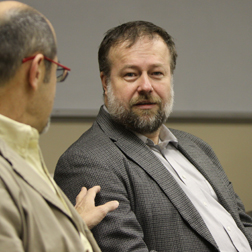 Professor Mikek said he is easily frustrated by questions about his identity, but he also said the topic leads to good classroom discussions.

“I often ask my students, ‘What makes you American and what makes me different?’ It’s a shockingly difficult question,” Mikek said.

One student asked the professors why they chose to stay in America. Professor Gomez gave a brief history lesson and reminded the students that since the dawn of time humans have been nomadic. The concept of staying in one place — in one country — is a relatively recent phenomenon. 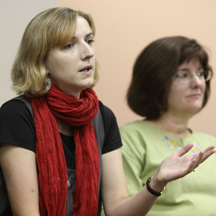 Professor Szczeszak-Brewer, being the fine teacher she is, turned the question around and posed an interesting notion to the students.

“We do tend to be nomadic, to move, to seek new ways to define ourselves, yet we have a need to fit in,” she said. “These two sentiments are present at the same time. As college students, you want to seek and to explore — all so that you can determine who you are. And yet you join fraternities and clubs so that you feel as though you fit in.”

Professor Mikek wanted to drive home one key point: The Wabash professors are in the tiny minority of most immigrants in this country. “We were not forced to come here for financial reasons,” he said. “We are part of a brain drain from other countries… Look around at places like NASA and you’ll find people from all over the world working there.”

When Professor Szczeszak-Brewer introduced the panel, she said, “We teach immigration and exile in our classes… and we want to place human faces behind the history and the stories.”

By the end of the discussion, the students still had more questions than answers. But they also began to realize that behind the radio talk shows and screaming headlines, immigration is about real people. Immigration has a face.