Jim Amidon — My friend and colleague Guyanna Spurway retired on Friday. On Thursday afternoon, about 100 of us gathered in Caleb Mills House to give her a hug, wish her (and husband Jack) well in the coming years, and pay tribute to what she’s meant to Wabash College.

The reception was really quite nice and Guyanna joked about having written a half-dozen different speeches for the event, most she said were written between 2 a.m. and 3 a.m.

Most people laughed when she said that. I smiled, but the longer I thought on it, the more I realized that Guyanna really did stay up in the middle of the night to make sure her last formal words at Wabash would be spot-on for the occasion.

Interesting, too, because Guyanna had few opportunities to speak in front of large groups of people during her 39 years as one of the most impressive administrative assistants the College has ever had.

Guyanna spent her entire career behind the scenes, and literally behind a large desk with a shelf on top of it so you could barely see her when you walked into the Advancement Office in Kane House. But she was always there and always doing the zillion little things it takes to make a big machine like Wabash hum right along.

For those who don’t know, the Advancement Office is in some ways the “machine’s” engine. The name of the office suggests that we who serve in it help advance the institution forward. More simply, we engage the alumni and foundations that make generous philanthropic gifts to sustain all that happens at Wabash.

None of us were quite sure how many deans of advancement or directors of development Guyanna assisted in her 39 years at the College. I think we settled on 10, but the late Dick Ristine ’41 served in a leadership role in the office on three different occasions, which probably puts the number at 12 or 13.

Guyanna has been the steadying force through at least three major capital campaigns that raised more than $200 million. She’s been the human file cabinet of institutional memory, donor relations, and alumni engagement. She’s been here longer than any of us.

She told us Thursday that when she left her own college, she simply walked into Don Dake’s office in Center Hall and said she wanted to work for Wabash. She started soon after, first with the deans and registrar and later moving to development, which later became advancement.

While the names of offices changed and titles of her supervisors morphed over time, Guyanna remained constant.

I admire her for her quintessential professionalism. They don’t make them like Guyanna anymore. Her attention to detail is unlike any person with whom I’ve worked. Her organizational skills — crafted and honed decades before excel spreadsheets and databases — are second to none.

I wish I knew how many times I walked into her office to ask for information on an alumnus, a trustee, an event, or even the President’s Christmas card from 25 years ago, and she would quickly snag a file and put it in my hands.

Again, her professionalism was an inspiration to me when I first started working with her in the spring of 1987. 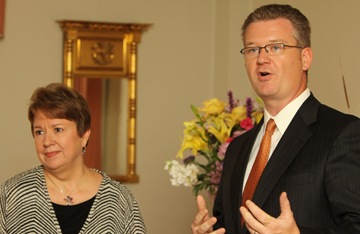 But her love and compassion for her co-workers — people like Mr. Ristine, Bill Stout, and Susan Cantrell — is what set her apart. When any of us in the office were going through tough times, Guyanna would always be there with a card, a hug, or a few helpful words. When my daughter was born, it was as though Guyanna had a new grandchild. (And just ask her about her own grandchildren!)

Guyanna’s supervisor Joe Emmick saluted her on Thursday and thanked her for her service. He also thanked her and acknowledged her for her discretion. People like Guyanna are among the first to hear the really good news or the really bad news, and she was always discreet and professional, Joe said.

But then, at the close of his remarks, Dean Emmick talked about how it was his personal friendship with her that stood out most in his mind; how much Guyanna has enjoyed watching Joe and Sara’s son grow up, just as Joe and Sara have delighted in Guy’s grandchildren.

I really mean it when I say they don’t make ‘em like Guy Spurway anymore. Her humane goodness and love and compassion for others made her a friendly face and joyful colleague. Her ability to hold together a large, unwieldy organization over four decades while serving a dozen bosses with discretion and the utmost professionalism is awe-inspiring.

We at Wabash have said farewell to a goodly number of long-serving colleagues in the last year or two, with still more early retirements on the near horizon. In Guyanna Spurway’s case, she will be gone from Kane House, but remembered by all of us who had the privilege of calling her friend and colleague.