Lucas Bucina ’19 Indianapolis Film Festival – This summer I was fortunate enough to be one of the two interns at the Indy Film Festival from June 5 until July 28. Despite the film festival only lasting from July 13-23, Russell Berning and I had many tasks assigned for us to fulfill our time, week by week until the festival began.

The first task we had been assigned was to research and gather information about the film festival. This was in preparation for its 15th anniversary the following year, in 2018. Specifically, this entailed organizing a few large boxes containing several different types of newspapers over the last 14 years, including any information and ads regarding the film festival throughout its existence. Dan Moore had instructed us that this had been left previously by the former head director of the festival. Unfortunately, all of the newspaper articles were mostly disorganized and rarely marked with what pages mentioned the film festival in them. So Russell and I took it upon ourselves to split well over 100 different newspapers between each other. We read through the articles, identified which articles had ads, interviews with from board members or directors who had previously participated in the festival, or lists of movies playing in the festival for that year.

Some of the other projects we were assigned were to watch a list of the popular movies Dan had selected, which were going to be played at the festival this year. Russell and I were going to spend a lot of our time working at the ticket booth for the festival, to answer questions for customers and directors attending the festival. Watching the movies would also help us be able to suggest movies for people to watch when they were purchasing their movie tickets to any of the showings throughout the week. There was also a printable grade sheet we could use to grade the films we watched too. Our next task was to review and correct any mistakes in the 2017 film festival program before the final 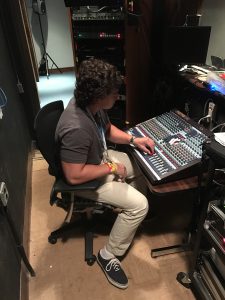 draft was to be released by NUVO, at the end of June. Some of the other tasks that had been assigned before the festival were some busy work for organizing and counting leftover supplies from the previous year, and shuttling directors to and from the airport to their hotels or the IMA, the location of the film festival.

As we approached the festival’s opening night, we had attended several training sessions for the volunteers participating in the festival, and delivering supplies from the Bohemian Opera Center, office location for the Indy Film Festival, to the IMA. Once the festival began, a typical 6-10-hour day the festival went from each day, would involve managing the ticket booth, working the projector for the films, coordinating pickups for directors from the airport, organizing merchandise, and setting up for the other several events that took place in the festival too. Overall, this experience was very rewarding to be a part of. This non-profit film festival offers a great contribution to bring hundreds of filmmakers and film lovers together to appreciate independent films that may not have the connections or money to make it on the big screen, such as Star Wars and Marvel Comic films.

This internship offered me a much different hands on experience, outside of the typical office job this summer. It had taught me how to improve my communication skills with customers and clients face to face, and how to gather and organize all of my research too. Words cannot describe how thankful I am that I was not only able to be a part of the largely growing Indy Film Festival this year but thanks to the Lily Endowment, I was also able to be a paid intern for a nonprofit organization this summer too.