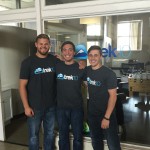 Throughout the course of this summer I’ve had the opportunity to intern with Trek10, a startup whose main facet involves consulting with companies who use Amazon Web Services (AWS); a cloud computing service that allows for massive data storage, real-time data analytics, app and website building, and a multitude of other features. When I first accepted this position, I was hesitant about two things. The first being that I had no experience with AWS, let alone any other cloud computing software. The pre-job training was intense, and a lot of new terminology and concepts were thrown my way. However, I was lucky enough to be working with some of the best and brightest in the field, as well as two of my good friends and fraternity brothers, Sam and Ashton, who were eager to make sure I knew what I was doing.

The second point of hesitation was that in 2011 South Bend was cited by Newsweek as one of the top 10 dying cities in the U.S. Why would I want to spend my summer somewhere like that? Well, this source of uncertainty is actually what enthralled me in my decision to take the position. I spoke with Roland Morin ’91 as he explained the revitalization efforts that companies like Trek10, Union Station, and Enfocus, just to name a few, were attempting to help South Bend.
During my first week, I noticed many things that might indicate a “dying” city; poor roads, abandoned buildings (one of which being the old Studebaker factory, whose economic aftermath after closing some 40 years ago is still felt to this day), and a homeless population. However, I also experienced first-hand these immense revitalization efforts which simply hearing about does no justice. Union Station, a former train station turned data hub and professional office building where Trek10 is located, has plans in the immediate future to renovate 800,000 square feet of the abandoned Studebaker factory in order to move its business there. Included in the new Union Station are classrooms, a workout facility, an auditorium, and a ton of new space for more tech-heavy companies, like Trek10, to call home. The hope behind moving to a larger facility is to attract ultimately, businesses with well-educated employees and higher paying jobs to kick-start the economy.
Also, South Bend initiated something that I had not experienced during past internships in different cities/counties; an intern “connect” program. With upwards of 80 interns in the South Bend/St. Joseph County area (of which about 10 were Wabash men), the County hosted and helped organize numerous events for us. We went to a Cubs game, a country concert, white water rafting, helped at a local food bank, and participated in networking events as part of the Young Professionals Network. Additionally, the program brought in a weekly speaker which included Trek10’s CEO and founder, Andy Warzon, as well as the well-received Mayor of South Bend, Pete Buttigieg. This may have been one of my favorite events the program put on, as we heard talks and engaged in discussions about personal branding, methods for assessing businesses, how to go about bootstrapping your own business, and the countless initiatives, efforts, and programs that the city is tackling in order to bring life back to South Bend. Having such a well-rounded program that kept me engaged outside of work hours helped me truly see South Bend for what it is. I no longer see it as a dying city, as that implies South Bend is headed in a direction worse than its current state. Rather, I view South Bend as a growing city, easily observed through its efforts and successes in bringing and retaining talent from schools such as Notre Dame, Yale, and of course, Wabash. Additionally, there’s an atmosphere of optimism as its citizens all rally around and support their Mayor, placing their trust in a local government who’s already proven its capability in helping South Bend. I’ve never experienced such a high overall level of confidence from a community. Just about every person I talked to felt hopeful for the future of South Bend, given its recently bleak past. And to me, having the entire community believe in the future of the city is the most crucial aspect of growth.
In closing, I’d like to thank the Eli Lilly Endowment for funding opportunities as beneficial as the one I experienced this summer. Not only did I gain knowledge of cloud computing software and an insight into the hi-tech world unavailable in the classroom, but I was also able to be part of something bigger than myself. It felt incredible to know that by taking part in these intern connect events I was making a difference in South Bend. Though I’m not from the area, I plan on returning and continuously checking up on its progress as I feel like the part of the community after my eight weeks there. If the goal of the Endowment is to invest in Indiana, it’s doing a fantastic job by sending interns to places like South Bend and other Indiana communities where Wabash men can make a difference.