Bilal Jawed ‘ 17 – It’s hot in the Tyvek HAZMAT suit; because the gas mask I’m wearing is airtight, the usual ammonia odors of a methamphetamine-infected house don’t reach my nose. The bright yellow suit, neon green boots, and a double pair of purple gloves make me feel out of my element, but that’s expected interning with the Montgomery County Health Department.

My experiences interning with the MCHD can be summed up in one image: stepping into a shallow puddle only to find yourself drenched because that puddle was much, much, deeper than expected. I entered the internship with an elementary understanding of the role of the health department: checking restaurants here and there and possibly standing by in case of a health emergency. I quickly realized that the health department plays a much larger role in our everyday lives, whether we realize it or not. Whether we are taking a swim at the local pool, enjoying a taco at Little Mexico, or simply relaxing on the back porch, the health department is hard at work in the shadows – testing pool and drinking water, inspecting food temperatures, or adulticiding mosquitoes while we sleep (just as a few examples).

One of the lesser-known duties of the MCHD is overseeing the septic systems in the county. Montgomery County has both dense urban and rural areas, making a countywide sewer system inefficient. The latter groups, including 12-14 thousand households, rely on septic systems. Septic tanks are essentially individual water sanitation systems for households not connected to the city line. Solid waste is separated from liquid waste, which is then filtered naturally through the soil. While this may appear simple, there is a long and strenuous list of regulations the department must oversee. While the average citizen “flushes and forgets,” they probably don’t appreciate the intricate processes, preventing dangerous human waste from harming our health. Worldwide, 40% of the population, practices open defecation which can lead to health risks such as diarrheal diseases, the sixth leading cause of death in low income countries.

As a summer intern one of my goals is to monitor vectors of Montgomery County such as mosquitoes, which spike in the hot and humid Crawfordsville summer. Vectors are any organisms that are possible carriers and transmitters of infectious diseases such as bats, rodents, and your favorite mosquitoes. The vector program has three main components: surveillance, adulticiding and larviciding. Every proper public health measure begins with assessing the situation. The health department accomplishes this by setting traps in possible mosquito environments with human activity. These environments include locations with untreated or standing water without fish, shaded areas, and areas with sewer odor such as the water treatment center. After locating these areas, the Health Department places simple traps with bait and a vacuum. The trapped mosquitoes are then recorded, classified, and sent off to the State Health Department to be tested for West Nile. Areas with high mosquito populations and areas testing positive for West Nile are indicators of where the next two components of the program will be deployed. Adulticides are aerosol sprays that kill adult mosquito organisms on contact. Larvicides on the other hand, attack mosquitoes at their larva or pupa state. Larvicide comes in a solid form, which is spread throughout standing water. The mosquito vector program is proactive, keeping track of mosquitoes and West Nile before it’s too late. 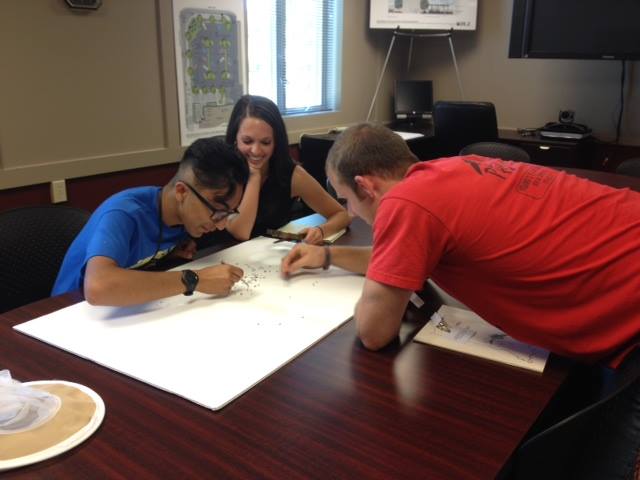 I would like to describe an average day in the health department, but there is no such thing. This internship has kept me on my toes because it is essentially not just a single internship, but a multitude crammed into one summer. Just a few of the experiences include: forming a vector control program, attending council meetings, educating the public through newspaper articles, probing for lice, inspecting septic systems, surveying meth-contaminated houses, water testing, analyzing data, county mapping, dipping for larvae, and the list grows with each day. I may not be an expert in any of these (at least not yet), but I have gained a greater understanding and appreciation of our health. I would like to thank Lilly Endowment, Inc. and Wabash College Career Services for this amazing opportunity.