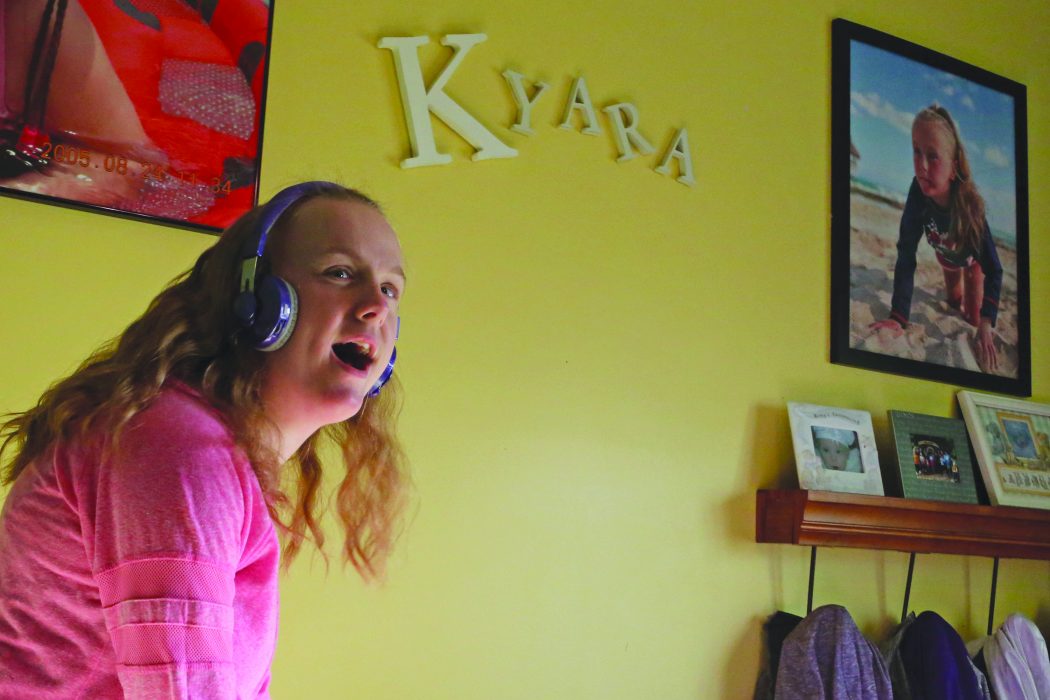 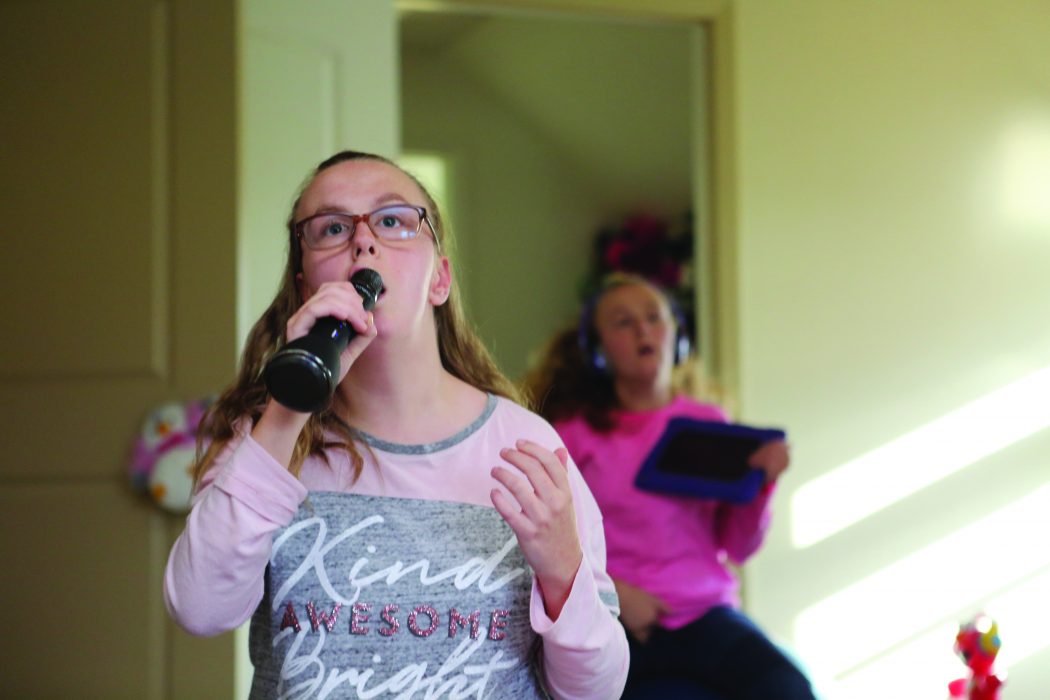 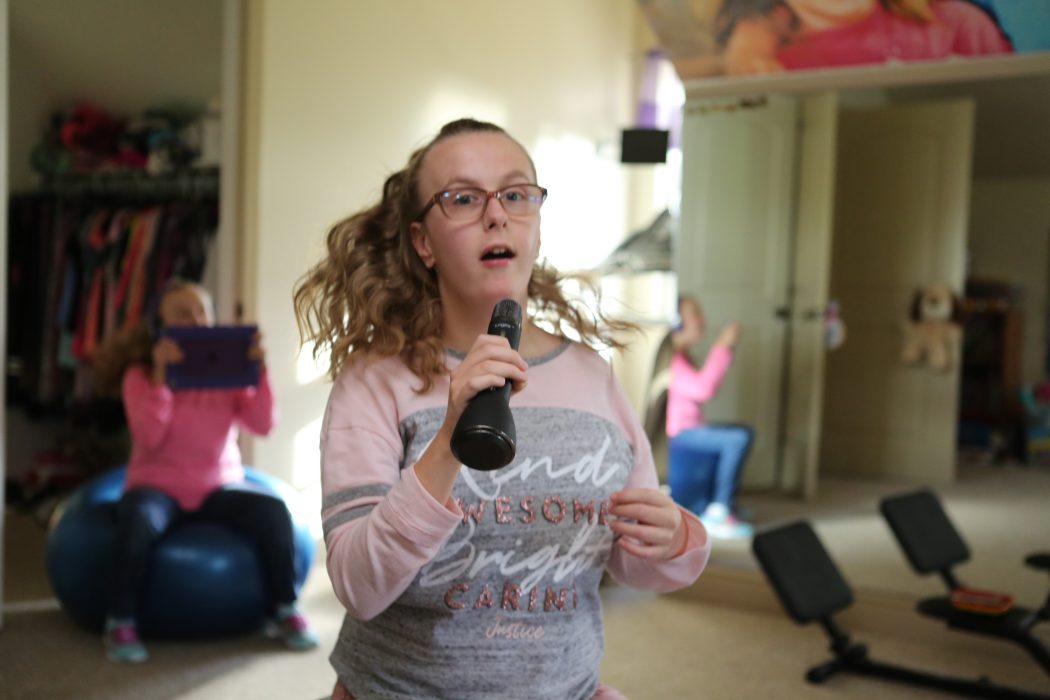 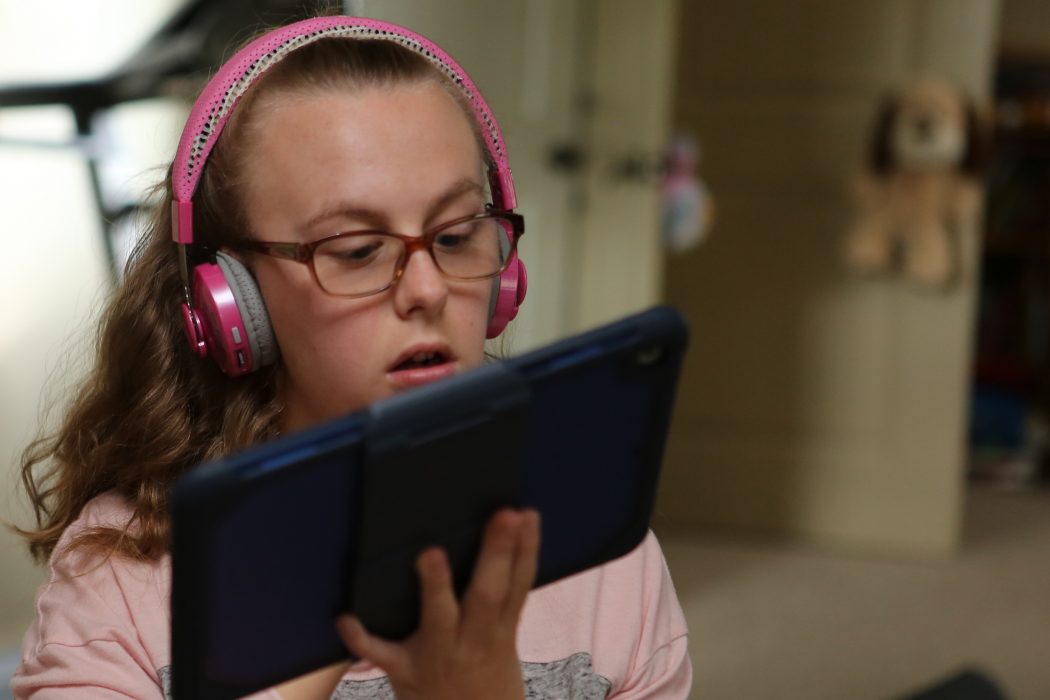 Speech-language pathologist Debbie Witkowski had warned me that Kamryn Lambert might slap things when she got frustrated. So as I pulled up to the Lambert home in the countryside outside of Washington, Pennsylvania, for my photo session with Kamryn and her twin sister, Kyara, I tried to recall what Witkowski had told me was the best way to approach these teenaged girls—both of whom were on the autism spectrum and had a congenital condition called periventricular leukomalacia.

“They both love music,” she’d said.

Sure enough, Kamryn was humming to herself when I walked in. It was a familiar tune I tried to remember as I introduced myself to both girls, their grandma, and a home health worker.

She kept humming, so I joined in, and added the words.

But she was getting agitated—probably by my singing.

“Can you tell him how you are feeling?” Her grandma asked, moving Kamryn’s hand to the speech-generating device (SGD) with Minspeak® software. Kamryn pressed a few keys.

“Frustrated,” said a voice from the device.

“I’m sorry,” I said. “Is there anything I can do to make that better?”

Kamryn went back to singing. I joined in. But I could see the frustration coming back.

“Spaghetti,” Kamryn said. And we all laughed. Kamryn hummed as I added the words and Grandma came in on the third line:

On top of spaghetti

All covered with cheese

I lost my poor meatball

Then Kamryn went to another tune, and I added the words.

If you’re happy and you know it

Kamryn clapped. And we were good for the rest of the afternoon and a one-hour photoshoot in the girls’ “hangout.” It’s surprising how just a couple of well-chosen words can help two people understand one another.

it was a lesson I first learned in 2004 when I covered the Pittsburgh Employment Conference for Augmented Communicators to write about SGDs that use the Minspeak language system invented by Bruce Baker ’65. Based on the Wabash classics major’s study of Mayan hieroglyphics, Minspeak gives those with autism, cerebral palsy, ALS, stroke complications, or head injuries a better way to communicate. Instead of spelling out entire words, which can take minutes, people using Minspeak’s UNITY® system choose from a number of pictures (icons) on a keypad, combining them to make a word, phrase, or sentence that is “spoken” by the device. For example, Kamryn was able to tell me with three keystrokes that she was frustrated. Once clients learn the icon-driven system, they can communicate more quickly and expressively.

Baker hosted more than 100 users and their families at that conference, but none of them were on the autism spectrum. Witkowski says that’s the biggest change she has seen in the past 10 years.

“Of the clients I work with, I’d say more than 80 percent are on the autism spectrum,” she explains. Determining whether someone with autism can benefit from a Minspeak system requires careful discernment. When Witkowski first began working with Kamryn and Kyara, another specialist said only one of the girls was capable of using UNITY. Through a series of tests, Witkowski realized that both would benefit.

“We should never rule anyone out,” she says, remembering how the girl who was nearly dismissed was, months later, the first to ask Witkowski how her dog was doing after it had surgery.

“She went from a person who could only ask for music to someone who is remembering and asking a question about something that is happening in her speech pathologist’s life. By giving her language, we were able give her a voice to express her thoughts and personality.”

It’s as if a veil is lifted—a mask. That’s what Bruce Baker’s creation, and the work of speech pathologists like Witkowski, does. It unmasks us. Hearing Kamryn or Kyara, you connect, you see them differently. And they unmasked me that day. In 25 years in this job, I’ve never before sung with someone I’ve interviewed!

Kamryn and Kyara’s grandma says it’s been amazing to hear her granddaughters speak. A moment made possible, in part, by a Wabash classics major who thought people with communication disabilities deserved a system, a language, that would allow them to express themselves in words.

Minspeak has found another group of users the past few years: kids with complex communication needs who come from Spanish-speaking households. Using Minspeak’s bilingual UNIDAD® software, these kids can become a bridge between two worlds: their Spanish-speaking home and their English-speaking school.

Bilingual speech-language pathologist Ellyn McNamara tells the story of Marisol, whose parents speak only Spanish. “Marisol loves her parents very much, but she had never been able to tell them with words in either English or Spanish because of her communication impairment,” McNamara says. “During her trial period with UNIDAD, Marisol was drawn to the ‘family/familia key’ and quickly selected ‘amo papa/I love dad.’ Marisol was not only able to tell her dad how much he means to her for the first time, but she did so in their shared language.” 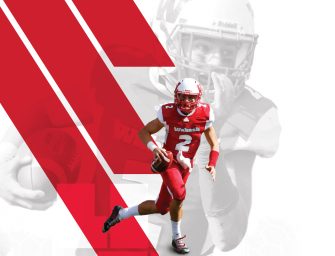