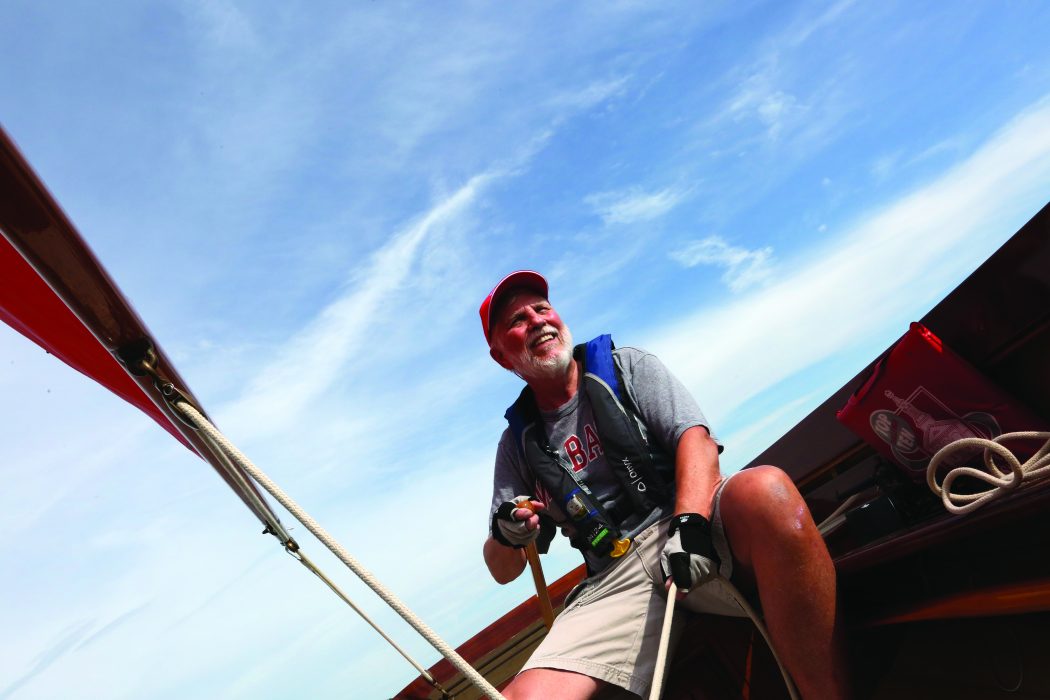 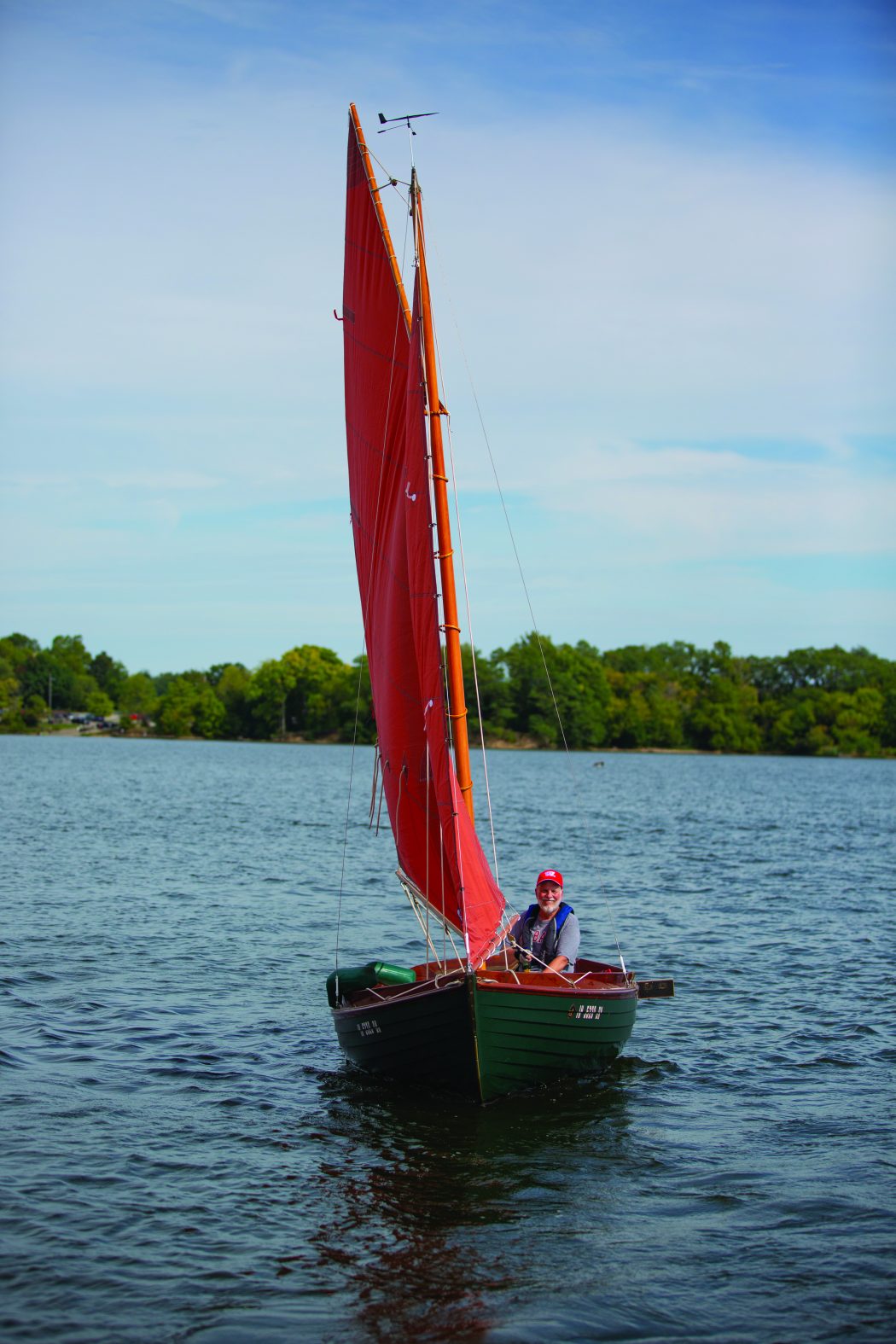 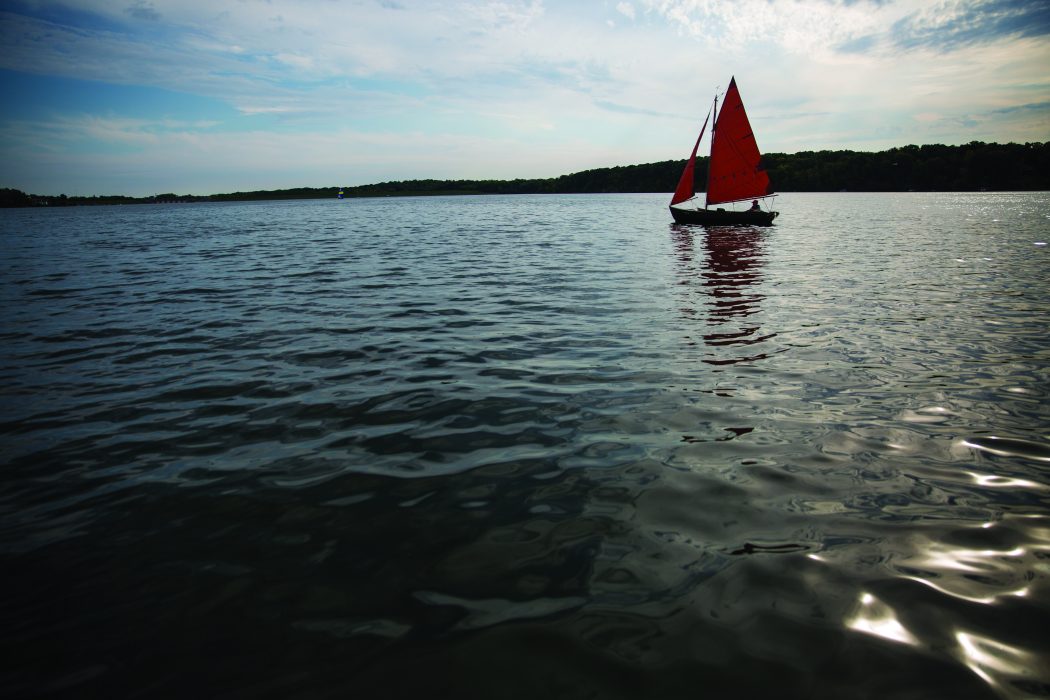 Jack Spurway ’69 knew he needed a project to kickstart his retirement. He wasn’t expecting the friend that came with it.

Jack Spurway had pictured it all in his mind after that driving vacation he took through New England: He’d spend his retirement on the coast of Maine in a house with a workshop attached, and in the afternoons he’d go sailing in a boat of his own making, one hand on the tiller, the other hand holding a beer as he kicked back and enjoyed his lunch in the ocean breeze.

So he attended the Wooden Boat School in Brooklin, Maine, for three sessions over the next three years; learned how to build a sailboat; and got a primer on how to sail. After that second session he found a place to purchase a keel for the boat, a Brooks Boat Design Somes Sound 12.5 foot daysailer based on a design from 1914.

But his wife, long-time Wabash administrative assistant Guyanna Spurway, said Maine was too cold, and he knew the boat project was too big for the shop in his house on Wabash Avenue. Now he had a 700-pound keel, the plans and skills he needed, but nowhere to build the boat.

Enter Gordon Huffaker, minister turned cabinet maker, and his shop in Crawfordsville. Spurway was picking up some table leaves he’d asked Huffaker to make and noticed the large desk Gordon had been working on for months was finally finished and delivered.

“I said, ‘That’d be great to build a boat here,’” Spurway recalls. “And Gordon said, ‘Well, come on. You can build it right here. You can use my tools, I can give you a hand, and we’ll both learn how to build a boat.”

When Jack found a source for the boat’s mahogany lumber in Poplar Bluff, MO, Gordon drove with him to get it. When Gordon needed a hand on a project, Jack would lend one. When Jack needed someone to hold a plank in place, Gordon was glad to help.

“I treated it like a job, like I was building a boat for a customer. I’d go down every morning and make coffee, sometimes before Gordon even got there, and leave about 5. If I was really into something, I’d stay longer.”

It was a perfect transition from his work as an industrial engineer, complete with co-workers. He calls his friendship with Huffaker “the fellowship of talking about anything and everything.”

Once a week Wabash Glee Club Director Richard Bowen would join them.

“We’d set up chairs in a circle and talk,” says Spurway. He swears that no sea shanties were sung.

When it was time to build, Spurway worked off of 12 sheets of plans and spent hours cutting, planing, shaping, and gluing the mahogany planks that make up the daysailer’s hull.

“The most important thing I learned from Gordon was patience,” says Spurway. “I saw that in him—the determination to keep moving ahead, not to let a challenge stop him.”

He also admired how Huffaker took time for others.

“He’d drop everything for anybody who came in and needed him—like he was still a minister. They would discuss personal problems, projects, furniture people wanted built. To me he was both a mentor and a good friend.”

And a catalyst for getting his boat built. Spurway worked on the boat for two years before Huffaker had to sell his shop to move back East where his wife, Lucinda, was working. The hull and deck were finished, much of the hard work completed. The mast and all of the finish work was left to do, but after the door to the shop was removed, the craft sitting on a trailer bound for a new workspace looked like a nearly finished boat.

“We bought a home on Eagle Creek near the water with a big garage, and working on the boat shifted from being a place where I had to go and clock in to walking into the garage from my house.

“That was too convenient. I could get a snack or a cup of coffee any time I wanted to. There were new projects around the house. And I missed those talks.”

It took him five more years to finish.

Jiberish was launched in the spring of 2017 not into the Atlantic, but into Eagle Creek Reservoir. Everyone who walked by or sailed near it remarked on how beautiful the boat was. They were amazed to hear Spurway had built it.

“That was rewarding.” He smiles. “To see it floating there, balanced, no leaks, everything as it was supposed to be.”

He’s still waiting for those leisurely sails with lunch on the deck and a beer—holding the tiller in one hand and main sheet in the other, he has discovered there’s not a lot of time for kicking back and relaxing when Jiberish is under sail.

But when the wind dies down, Jiberish is in its slip, and he steps back to look at the beautiful boat he made, it’s not the years of labor he thinks of, but the friend who worked alongside him.

“I’ve got this one snapshot where Gordon and I are leaning on the boat, and we’re sort of saying, ‘Hmm,’ looking at each other across the hull. That picture takes me back to that time, the two of us talking: the camaraderie of working in a shop together.”