Of course, he’s trying to pull my chain.

John Deschner ’97, the guy who once wrote columns in The Bachelor under the title of “Like a Monkey with a Shotgun,” is a near constant barrage of jokes and self-deprecation. Laughter flies about as freely as the words. 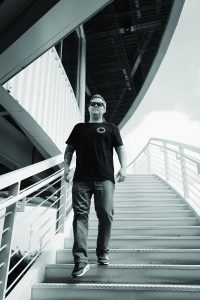 But every man has his tell. With John, it’s the jokes. Always the jokes. Don’t be fooled by the smiles. There is plenty of wisdom in the comments that come buried behind yet another one of his punchlines.

The guy has carved out quite a career in advertising over the past two decades, working for the top agencies—from Boulder to DC, Malaysia to LA, and for campaigns and products you know well: Gatorade, Coca- Cola, Volkswagen, Target, Nintendo, Delta Airlines. He was behind the launch of the Domino’s Pizza Tracker.

This dude is good.

As of November he is the managing director for CNX, Condé Nast’s advertising arm, in New York City.

“This is a really interesting way to take what I’ve been working on getting good at for 15 years to a very different place,” Deschner says, setting up the punch line. “I get to go wander through the Vogue closet whenever I want and try on clothes.”

Founded in 1909, Condé Nast is a media empire built around such mastheads of influence as the aforementioned Vogue, as well as Vanity Fair, The New Yorker, GQ, and Bon Appétit. Being the managing director for a stable of these brands means one thing: He’s an influencer’s influencer.

“When you drop CNX right next to the people who give much of the world their vocabulary for fashion, luxury, beauty, technology, and food, the job is really interesting,” he says. “What we are selling to the world is access to something you can’t buy anywhere else.”

Deschner’s new office at One World Trade Center has its perks: “The people who have come through these halls are some of the most amazing artists, writers, and photographers of the last few generations,” he says. It’s a lofty stage from which to do things differently, something he has sought out since walking off the Commencement stage 22 years ago.

The political science major then had just enough knowledge of HTML to build a web page, the skill that got him his first job as a designer. Realizing that the Internet was changing things quickly, Deschner found himself on the cusp of something different. And in a business that regularly values novelty, he shares an essential lesson: “Either you mutate ahead of it or you get dragged behind it.”

Embodying that mantra has helped Deschner do things his way at agencies like AKQA, Crispin Porter Bogusky, and Ogilvy Malaysia. But it was a change in mindset— the switch from seeing how much he could accomplish personally to how many people he could lift up with him—that has put him near the top of the field.

“That shift—from being skill and aptitude-focused to being much more people focused—was the most rewarding,” he says. “Shifting to see how you can assemble the right people with the right skillsets and the right personal chemistry, then helping them accomplish something really amazing, has been the biggest change in perspective.”

In 2014, Deschner led Target’s “Bullseye University” back-to-college campaign for Deutsch, Inc., which featured 90 hours of live-streaming shoppable video. Essentially, every visible item was available for purchase with just a click. Today such things are commonplace, but five years ago it was groundbreaking.

Once they got past the “hey this is cool” part, the complexity of it all set in. This wasn’t just about content: It included image tracking, computer vision, and e-commerce integration as well. It took nearly a year to execute. It was an immensely successful campaign, generating plenty for Target’s bottom line as well as awards and “buzz” for the agency.

“My job on that campaign was to see if I could link the talent and push it forward,” he says. “It was an insanely difficult year. I’ve worked on some super fun stuff, and that was really cool. That helped launch some careers, won a bunch of awards, and brought a wave of really interesting new business for us. The reward is sort of just more hard work, but…”

His voice trails, lingering for a moment on the thought. For Deschner, hard and good work has always led to interesting opportunities. He has found success bouncing from job to job, going everywhere, seeing how others do it. It’s all part of the experience.

“I wouldn’t have had the chance to do all of these things if I hadn’t kept saying yes to interesting opportunities. It’s really easy to not take the call or not to get on the plane.

“But one of my favorite feelings in the world is stepping off a plane and noticing the air and the ground smell different. There are adventures to be had.”

Six months ago, he was chief innovation officer at TBWA\Chiat\Day in Los Angeles. Now at CNX, he feels a little like the kid who was just tossed the keys to his father’s Porsche.

“It’s simultaneously humbling and frightening, but also I have the exciting, and sometimes unenviable, task of figuring out where to drive the Porsche.” He laughs. “I feel like I’m moving faster and thinking harder, which is pretty cool.”

Whether the keys have been to the Porsche or to The Bachelor office, there is a common theme to Deschner’s shotgun approach—one he explains with a knowing smile.

“There is an element of mischief to them, purposefully bending, breaking, or putting a dent in something, purposely putting a system a little bit on its head. That sense of contrarian mischief—without it, I might have a more middling existence.