Doug Petno ’87 brings a team-building strategy and the lessons of biology professor Tom Cole ’58 to his role as CEO of commercial banking for one of the nation’s largest financial institutions.

They are everywhere and all the same. The men in blue pants, white shirt, and tie, the women in business suits. Coffee in one hand. And ear buds. Everyone has ear buds.

Thousands crowd the streets and deli lines, a blur of navy and white. Millennials trying to make it in the financial industry in New York City. Some might be fortunate to enter the doors of the midtown headquarters of JPMorgan Chase. Others disappear in the hustle up 48th Street.

Doug Petno ’87 remembers well his first day in New York City wearing his only suit and shoes so small they hurt his feet. The building was Manufacturers Hanover then.

Oh, my God, how did I get here? he thought to himself in 1989, lucky to have a job but feeling overwhelmed by the city.

“I was trying to get by in a little apartment in Queens that was a pretty scary place to live at the time.”

Today, Petno makes his way through the same familiar streets. Only now he carries the responsibilities of Chief Executive Officer of Commercial Banking. The business that Petno leads provides banking and financial services to businesses, institutions, governments, and real estate investors. He sits on the firm’s operating committee, reporting directly to chairman and CEO Jamie Dimon. Twenty-nine years and counting and he brings the same mindset that got him in those front doors on day one.

“I’m focused on the job at hand,” he says. “I want to do the best I can and build a team around me to help make a difference. It’s not just me, like it was when I started. I have to cultivate a team that will make the most of this business and serve and protect our clients.”

CEO is a nice title for the biology major who had his sights set on being a veterinarian when he started at Wabash. The skills he picked up in classes like physics, organic chemistry, and ecology serve him well in JPMorgan Chase’s operating committee boardroom

“I was certainly grounded in being inquisitive and analytical, quantitative and qualitative,” he explains.

“The critical thinking and judgment behind the decisions I make today are muscles I developed at Wabash. In banking, you have to tear something apart to understand what makes it tick. Valuing a business—digging through layers to understand the health and wellness of a company—that is the core of what we do.”

Though he believes he would have loved being a vet, Petno discovered after doing some job shadowing that a life in health care didn’t resonate. He shifted gears and landed internships with telephone utility GTE and Indiana National Bank. The internships allowed him “to see moving parts and the mechanics of a company,” says Petno. “I had real responsibilities, saw the team dynamic, and felt that I had an aptitude for it.”

After Wabash, Petno turned down a full-time job and went straight to the MBA program at the University of Rochester. It proved to be a great pairing for the bio major and varsity soccer player. He was lured by a quantitative finance emphasis and a possible Wall Street landing spot, but he also appreciated the competition, camaraderie, and results.

“Investment banking is dynamic and global— you get to work with brilliant people and compete for the most coveted transactions as a team, and the outcome is very visible and tangible,” says Petno. “You either win or lose. I liked all of that.”

Despite not having a background in the energy sector, he was plucked fresh out of Rochester into an analyst program with J.P. Morgan’s oil and gas group.

“He liked me,” Petno says of his interviewer. It turned out to be a good match. Petno liked the people. He could relate to the Midwest feel of clients in Colorado, Texas, and Louisiana.

He garnered more experience and became global head of J.P. Morgan’s Natural Resources Investment Banking Group. He moved over to commercial banking in 2010 as chief operating officer, rising to CEO in 2012. Under his leadership, the business expanded significantly into new markets and built a specialized industries model to cater to clients in industries like technology, life sciences, and government banking.

Petno credits a little luck and a bit of serendipity when talking about his rise to the executive floor. He speaks of mentors like investment banking legend James B. Lee and Dimon, known for their impeccable timing and judgment.

“I learned to observe the people and types of behavior I admire and embrace it, building it into my own style,” he says. “People took chances on me, including Jamie when he gave me this job. I had no track record, but was determined to prove myself.”

With more than 250,000 employees at JPMorgan Chase, strong leadership is essential. Petno insists that a servant-leadership philosophy is a must—leaders need to be a servant first and prioritize people and community.

“Don’t ask people to do what you wouldn’t,” he says. “Whether it’s making tough decisions about talent and people, a debate about work ethic, or how you perpetuate the culture, we always say, ‘No matter who you are, you are a leader in some way. Somebody is looking up to you—the receptionist out front, the security guard, a junior-level employee. There is always a leadership obligation.’”

That’s in the forefront of Petno’s mind as he heads the commercial banking business. He has tried to create a culture where people can speak freely and honestly. He strives to be ahead of the curve.

“When our team gets together, we spend very little time on what’s going well and we shine a bright light on everything that’s not,” he says. “We address head-on the five things we need to be worried about, as well as emerging issues. We celebrate, have fun, and are proud of our accomplishments, but our management time is spent on our toughest situations, our biggest concerns and problems.”

With 10,000-plus employees in commercial banking, offices in 90 countries worldwide, and millions of clients served, he values relationships.

“I’m most proud of the team, the people, and the small part I’ve played in others being successful,” Petno says. “It makes a huge difference. We are entirely a people business.”

Away from the bank, Petno shares his time with two organizations he values. He is a global board member of The Nature Conservancy and is vice chair of NatureVest’s advisory board, a conservation investing group, which allows him to draw on the lessons learned in Waugh Hall from professors Tom Cole, Les Hearson, and others.

With views of the Chrysler Building and Central Park now as close as the boardroom windows, Petno says he still feels that sense of wonder he had as a young man walking down 48th Street in ill-fitting shoes: “There is never a day where I take it for granted.” 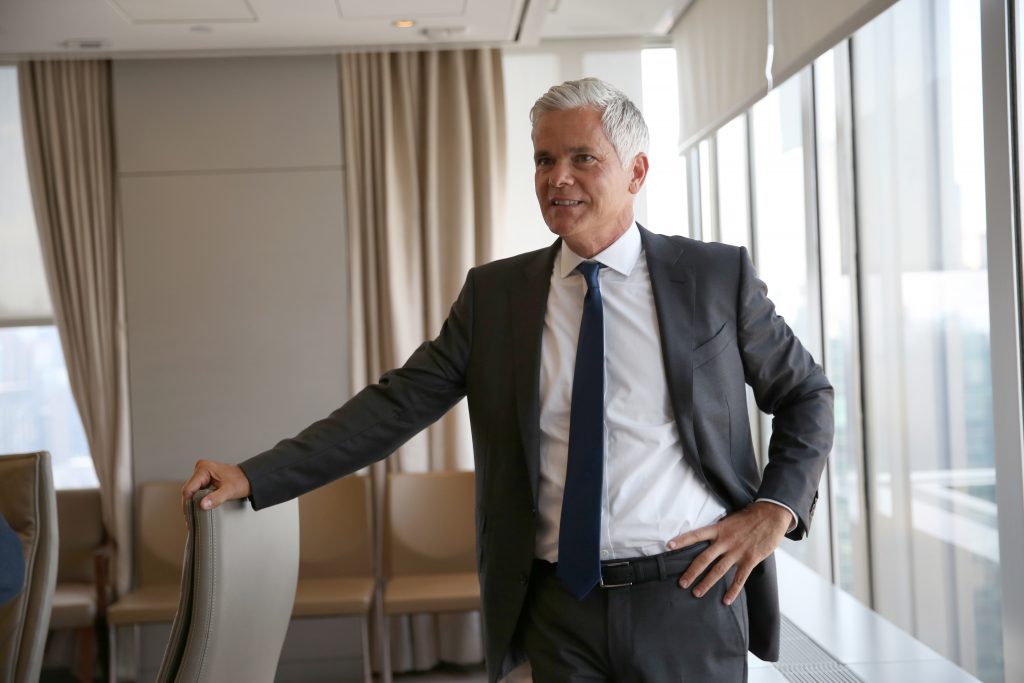 The Grit to Lead
As the Class of 2019 steps into the world searching for that first job, WM asked Doug Petno ’87 to talk about what he looks for in candidates for jobs at JPMorgan Chase:

• “Grit. Curiosity. Passion and genuine interest. We’re looking for those who say, ‘I’m here because I love finance or markets or the industry,’ not just for the money.”

• “Being genuinely proactive— you can’t teach that. That’s different than raw intelligence.”

• “To bank with the best companies in the country, you have to have thick skin. You have to be able to dust yourself off. Not everyone can handle that. Everyone knows whether you won or lost. Can you come in the next day and start over?”