“I can’t stress enough how important it was to be in LA. I made more connections in five months there than I made in 22 years in Indiana.—Nick Holland ’19

WM interviewed Holland and Zubeck last fall after both had interned with Brian Confer and The Headshot Truck in Los Angeles—Nick in Summer 2017 and Michael in Summer 2018.

Some excerpts from that interview:

Nick: I had no idea what to expect when I went out there; I had no experience in business. I did a billion different things because at a startup there are so many bases to be covered.

Michael: You just do what you need to do. I went the year after Nick and at first my main goal was to find new customers. Then Brian started me on a software that made communicating with clients more efficient. 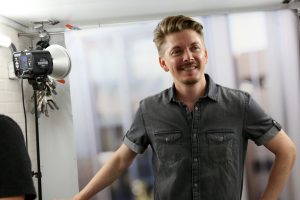 Brian Confer ’01 shows us around The Headshot Truck during one of its stops in an LA neighborhood.

Nick: Brian figured out what we were good at, so I did a lot of sales, leadership building, and programs.

I got a vast amount of exposure to a lot of stuff in LA, especially the business.

Michael: I had been talking to both Nick and Brian for the semester before I went out to LA., so I knew who I was going to be working with, had to chance to get better prepared.

Nick: I came in with the idea of being pre-med, but after three semester I wanted to do something else. So I decided to get an internship, and this one with Brian was in LA, so I applied for it.  I knew I wanted to be in LA eventually and to learn about business and connect with alums.

They talk about the Wabash mafia in Indianapolis, but how cool is it to find Wabash alumni in LA!

It turned out to be the best. Brian was super helpful with everything I wanted to do, whether it was connected to the business or not. I want to be an agent someday, and he has done a lot of things to help me reach that goal, and gave me the flexibility while I was there to do that.

Michael: It’s all about who you know there. Brian knows so many people—I met photographers, actors, business professionals, all wanting to get better. The business grew leaps and bounds while I was there.

Nick: I can’t stress enough how important it was to be in LA. I made more connections in five months there than I made in 22 years in Indiana. I was the kid from Indiana, which made me different.

Michael: I went on a run every day, and on one of the days I ran up to the top of the mountain looking over the city, and I met a cameraman for one of the studios there. He came to LA with nothing, and now is well-established. He said it’s all about who you know, how you use your network, and how hard you’re willing to work.

Nick: This past summer I was in LA again, and Brian helped me find opportunities that will get me to my career one day. He has been the most pivotal part in getting me to my future.

Michael: We got a lot of professional and personal development.

Nick: And our headshots look great!