Professor Gunther shows her first quilt, which she made in elementary school. 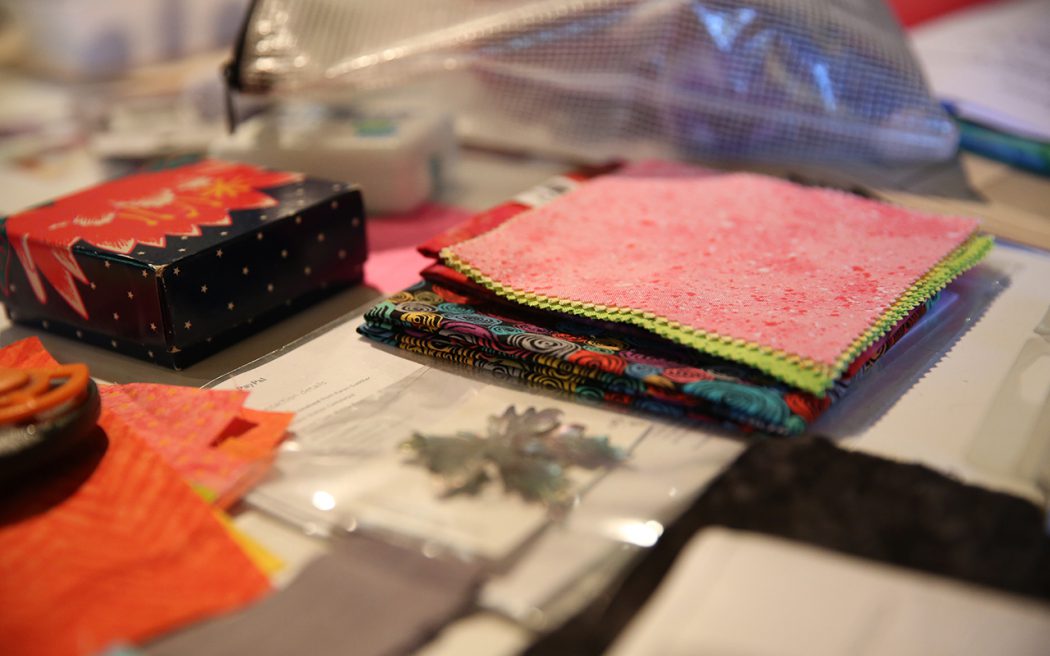 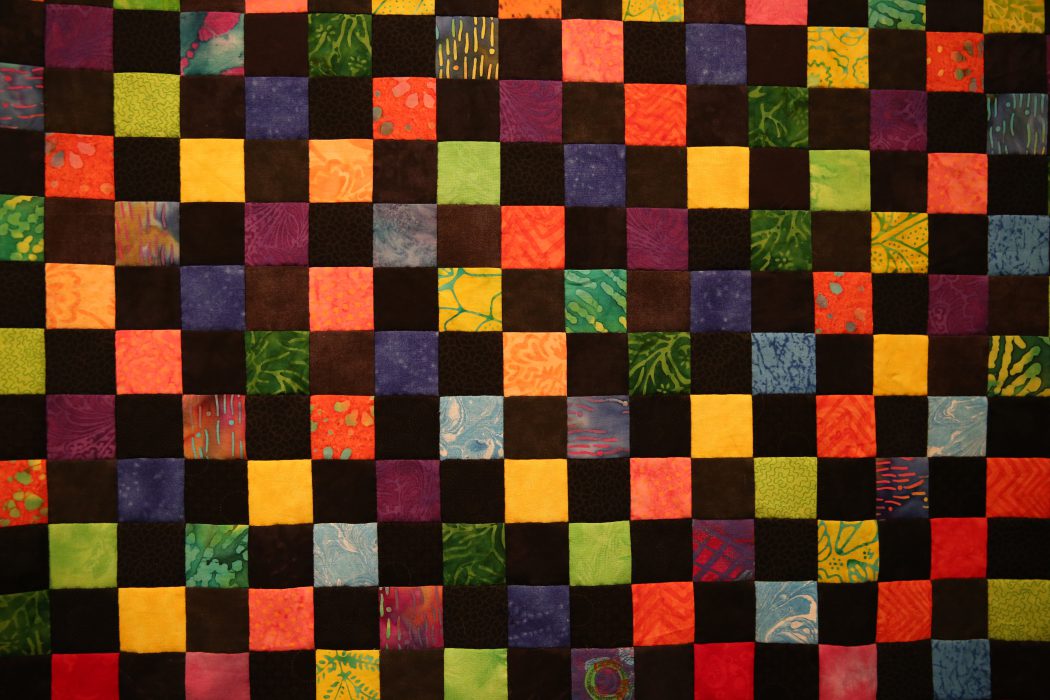 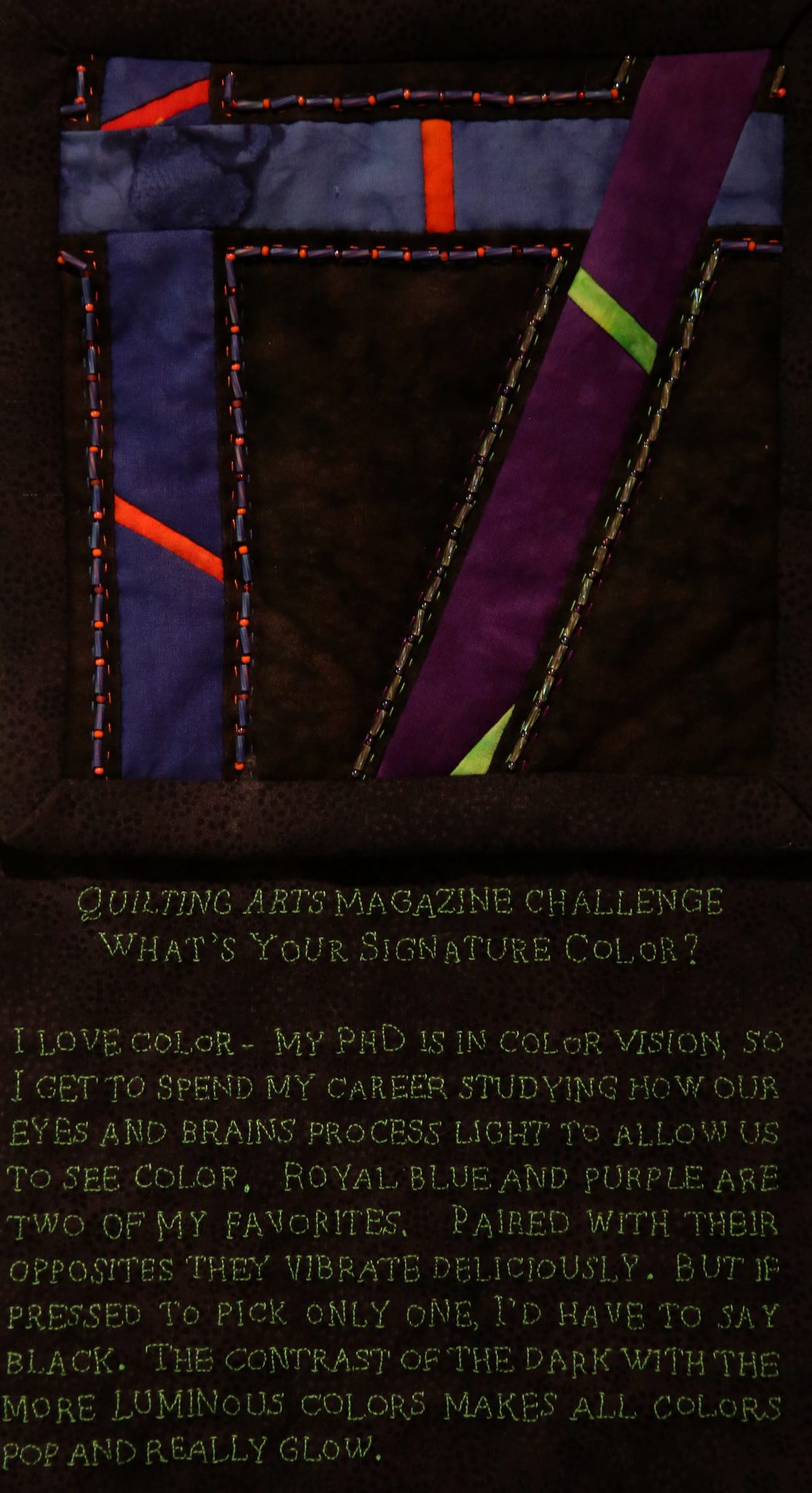 Not Just Black and White

Karen Gunther wanted to be an artist when she grew up.

She made her first quilt in elementary school and loved doing it, but in junior high she decided she was better suited for science or math.

She never let her creative side wane, though. She knitted and sewed with both of her grandmothers, and she picked up quilting again while studying biopsychology at Oberlin College.

“I wanted to somehow combine quilting with science,” Gunther says, “so I ended up studying color vision.”

Gunther says it’s fun “immersing” herself in color, and her passion for her work extends to her personal life. She continues to create quilts, has shown them locally, and her office is adorned with various forms of colorful expression.

The wedding rings for her and her husband, who is also a vision scientist, were designed based on their field of study. Coral, chrysoprase, and lapis stones were used to symbolize the three cones found in the retina—red, green, and blue. Onyx lines the sides of their rings to represent the stimuli the couple uses in their research.

Now that she’s received a grant worth more than $200,000 from the National Science Foundation, Gunther’s research is about to expand.

“Vision scientists have recently determined that the retina routes the cone signals into three ‘cardinal color’ pathways: red vs. green, bluish vs. yellowish and black vs. white,” she explains. “But how do people perceive colors beyond the six cardinal colors—the ‘non-cardinal’ colors?”

The grant will fund three years of research into that question, as well as summer interns for Gunther.

And though the waiting period was long, Gunther said she never stressed.

“The primary expectation of Wabash faculty is to teach, with secondary emphasis on research, so my job doesn’t rely on the grant as it would at more research-intensive schools. Some researchers are on “soft” money—they need to get grants to get their salaries.

“I wanted the grant, it would be satisfying, it would fund more summer interns, but I wouldn’t lose my job without it.”