WM ASKED OUR READERS, “What was the most embarrassing moment of your professional career?”

Adam Burtner ’17 was loading 156,000 eggs into a delivery truck before embarking on an on-the-road interview when I asked him to turn around so I could take a photo for the Wabash Twitter page.

His fraternity brother posted a comment with a wink emoji: “Drive safe.”

I thought it was a kind gesture. Adam knew better.

It had been only a few months since Adam had taken the role of executive director at HATCH for Hunger, a non-profit that partners with egg producers to provide central Indiana food pantries with thousands of eggs that otherwise would have been thrown out.

He had prepared himself for the fundraisers, the corporate events, and the logistic side of things. Actually delivering the eggs to the pantries? Not so much.

“I’m going to pick up the truck at Ryder. I don’t have a CDL, so I just gave them my driver’s license and they signed off, just like everybody else does when they move houses or something like that.

“When I got to my first stop, I opened the back of the truck, and all the cartons had fallen. Yolk was running through the bottom.”

Some of the eggs were still intact, so even though he had to make the awkward phone call to some pantries to tell them they weren’t getting any eggs that day, Adam was determined to deliver what he could.

He explains how he didn’t even have to put the truck in park. He just slid right under the bridge—disintegrating the refrigerator on the top of the truck—until it just stopped.

At this point, I have to apologize for laughing so hard because tears are running down my face.

“No, it’s funny now. But on top of that, I had been charging my phone next to me in the passenger seat on my personal computer because I needed it for directions. When I hit the bridge, my computer fell, shattered, so I had to buy a new computer, so that was like 1,500 bucks. Needless to say, it was a really, really bad day.”

Adam has learned a lot of lessons since that day. He bought poles to stabilize everything in the back of the truck. He maps the route now before leaving (and makes sure there aren’t any bridges).

But sometimes you miss your street, like we did when we were wrapped up in our conversation. All of a sudden, that bridge up ahead is getting closer every second you take to decide where to turn around.

Adam looks over at me with one of the most mischievous smiles I’ve ever seen.

I work as a director of internal audit and I was speaking to a group of managers about some of the challenges internal auditors face maintaining the integrity of the audit process and having to deal with “push back” we receive from clients about the reports we produce.

Unfortunately, instead of using the term “push backs,” I said “kickbacks,” which had an entirely different connotation. 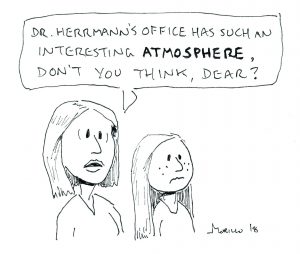 I’m a dermatologist and I was seeing a 16-year-old girl in my office for her acne. Her mother was also in the room.

The girl was in the middle of answering one of my questions when I let out a huge fart.

I never even felt it coming.

Normally I can cough or make some noise if one squeaks out, but not this time.

The poor girl didn’t know how to react and the mother put her hand to her mouth to suppress her laughter. All I could do was just say “excuse me” and try to finish the visit.

I could only imagine their conversation after they left the office!

While doing a Management Fellowship and on rotation in Arizona, I thought it was fashionable to not wear socks with my linen suit. That same day I had a one-on-one with our head of talent. I crossed my legs in the meeting, and he asked me “Jon….ugh…what’s happening here? You have to wear socks—this is a hospital.” 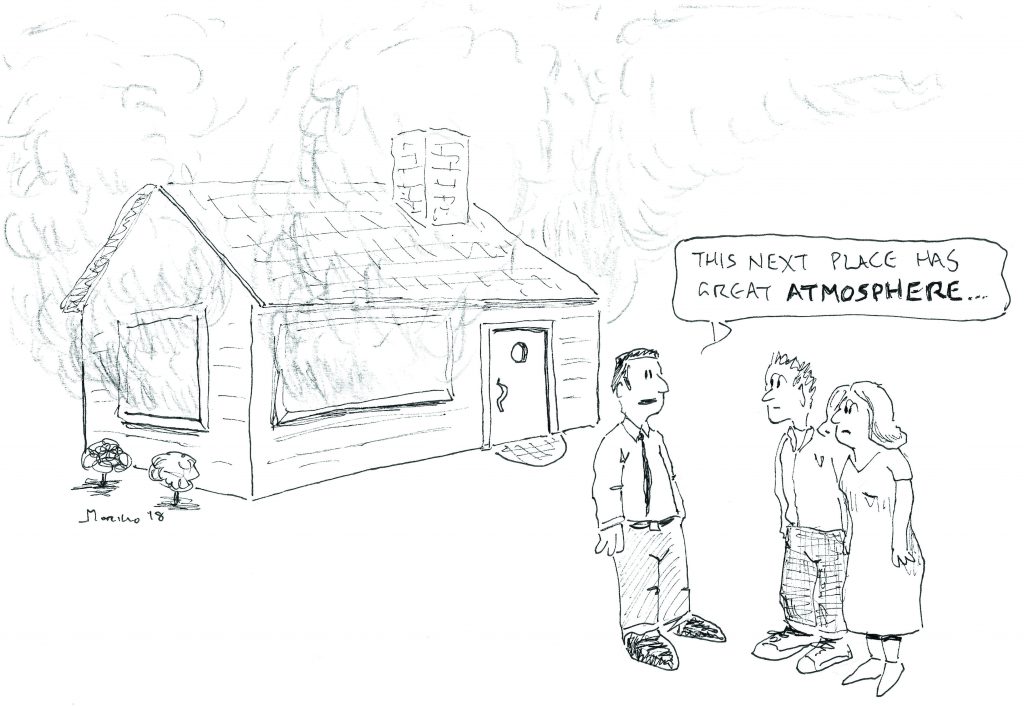 Many years ago I arranged a private showing for a large home on North Meridian Street in Indianapolis. It was filled with important artwork and fine antiques set against white walls and polished marble floors.

As it was a lovely fall day and the living room fireplace was particularly grand, it seemed logical to me that there should be a welcoming fire in it. The seller was not immediately warm to the idea but, trusting me, finally agreed.

A few minutes later and one Duraflame log lighted, the setting was perfect. The seller and I wandered off to the kitchen to await the potential buyers. After a few minutes we noticed that there was a pleasant smell of wood. The happiness lasted for about 10 seconds when smoke began to billow through the main floor.

I had forgotten to open the flue.

Doors and windows were thrown open as I contemplated the costs of cleaning and repairs, as well as a reputation now in flames. In the end, my seller was very gracious and any damage was negligible. The buyers laughed through the fog and bought the house that day.

My most embarrassing professional moment occurred just last week at the National Collegiate Athletics Association (NCAA) Convention. I received a message from one of my closest student affairs national colleagues, who was at the convention, asking about going to dinner. I replied I could not due to our previously scheduled conference dinner but would be happy to meet him for drinks ahead of that event.

I had not realized he had sent his message (by accident) to the entire national Student Affairs listserv … and, of course, my message had gone (even though I swear I did not “reply all”) to everyone across the country, as well.

The remainder of my day was spent answering emails asking if I was buying for all and personal messages from people at the convention asking what time to meet, where to meet, what to wear, etc. 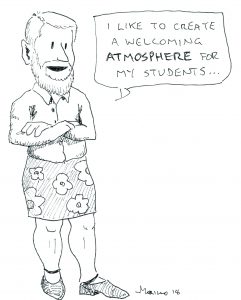 I have been a teacher at Beech Grove High School since 1986. In the early 1990s, our assistant principal, Mike McMorrow (grandfather of Michael Jennings ‘18) suffered a heart attack at school and passed away.

Mike was a wonderful individual and administrator; all the faculty greatly admired him. To honor his legacy, the faculty raised money to establish a scholarship in his name, making a push in the final year of that effort to collect $10,000.

A challenge was made to the student body to collect a certain portion of this. Teachers offered “incentives” to students if they met the goal. My incentive: I would wear a dress and wig and shave my legs.

Of course, they met the goal. I came to school one day dressed as I had promised. I was sitting in my room that afternoon with my door shut when I heard a knock. When I answered the door, there stood a man with a check from an organization to which I had submitted a grant to fund a project in our science department.

The look of astonishment was obvious.

Like most academics, I had classroom anxiety dreams, my version of which was walking into a class and realizing I had no notes, nothing planned for the day.

So one day early in my teaching career at Wabash, I walked into a World History class, opened my folder … and realized I had no notes, nothing planned for the day.

So I just winged it. Asked a question about what we’d been doing in class recently.

Lo and behold, a terrific discussion broke out! Embarrassment averted, and turned into pleasure. I’ve never had that dream since.

NOT JUST ANY “BOB”

A couple years ago I was at a conference on Hegel at Indiana University–Purdue University at Fort Wayne (IPFW) and was sitting in a room waiting for the panel discussion to begin. I was there early so I started chatting with the only other person in the room, who told me his name was Bob. He was an older gentleman with a long white beard. He was friendly. Didn’t seem to take himself too seriously as philosophers must be expected to do.

I thought he was a professor at IPFW.

We started talking about the job market in philosophy and the ways that hiring works at different places—just shop talk. But I do remember being very proud of how things were going at Wabash.

The panel begins and the speaker starts talking and references the person I had just been talking to by name, Professor Brandom. I had no idea. Robert Brandom is one of the leading Hegel scholars in the country, teaching at the University of Pittsburgh, the number one-ranked philosophy graduate program in the country.

And there I was giving him hiring advice!

He didn’t seem fazed, but I was pretty embarrassed.

I later learned that he was pretty famous for the long white beard.

* Professor Trott’s reputation apparently survived—she is the co-principal investigator on a $75,000 grant awarded by the Andrew W. Mellon Foundation to Fairfield University entitled “Conduct Unbecoming: Toward a Code of Publication Ethics in Philosophy.”