Standing on the Sidelines

The small white airplane with blue call letters and red trim approached Runway 14 from the west. But the flight plan called for it to land on Runway 19 from the south. As the control tower instructed the pilot to alter his approach, and the pilot responded by pointing his propeller up, the craft banked a hard left, one wing high in the air. Then the airplane stalled, spun, plunged nose-first into a field, and burst into flames 100 yards short of the runway and less than four miles from where I had lived as a child. The same field into which I had released monarch butterflies from cocoons nurtured during kindergarten. The field that had once contained railroad tracks onto which my dad and I placed nails that trains would flatten as they roared past. I remember my fingers burning the first time I touched one of those hot, smooth, newly flattened nails.

The pilot was my father-in-law. His three passengers—his wife, my wife, and our son—en route to my daughter’s high school soccer tournament, were killed. Pictures of the wreckage showed no butterflies—only rainy skies, blackened and torn metal, melted rubber, charred weeds, and wisps of smoke.

“Do you have a son named Robbie?” asked the man on the other end of the call I’d answered in the middle of a stressful Thursday at my law office. I had a trial starting the next morning, so I wasn’t on the airplane. “We found his phone.”

You found his phone? You mean the phone Robbie had acquired because I lost a bet with him on the outcome of a soccer match? A soccer match he and I had watched together at a local English pub at eleven o’clock on a midweek morning after we feigned his illness to take him out of school? THAT phone?

My thoughts and the field where they found Robbie’s phone are five weeks and five hundred miles away, but my body is standing, dazed, beside another field watching the first game for his Under-13 soccer team following that plane crash.

I swear I can smell smoke.

Robbie’s red uniform shirt with black trim and the number “7” lies flat across the team’s bench, a couple of boys in their uniform shirts sitting on each side of it, the coach down at the end. To his teammates, the jersey means Robbie is here with them. To me, it’s a reminder that he is not.

“He’ll be watching his teammates from heaven,” reassures one of the team’s well-meaning mothers with a sad smile, “helping them play their best.” She hugs me. “Jesus must’ve needed a good defender on his team,” says another.

“Yep,” I reply, nodding. All part of God’s plan, right? I want to say. Well f–k you, God, I say, but only in my head. To hell with heaven and screw Jesus, I add for good measure. I know there are no angels watching over things, no holy spirits helping us. If there were a God or a Jesus or angels, why then didn’t they step in and help my family? Did they really sit back on their overstuffed clouds, nibbling popcorn, and enjoy the show? Was it too much effort to point a finger and adjust the angle of impact? Where was my dad’s spirit? It was the same damn field where we had played when I was a kid!

I wish I could turn off my brain and leave this game and go home and hide under blankets.

I’m pulled out of my haze for a moment by some cheering. Dillon, Robbie’s best friend, has just scored a goal and is running back towards midfield pointing at the sky. His teammates gather round him and look to the bench where two boys raise Robbie’s jersey.

I manage to clap my hands a couple of times but without sensation of my palms colliding. It was a nice goal, but Robbie had nothing to do with it.

Robbie was a small kid, a feisty defender unafraid to challenge an onrushing opponent or venture forward in an attempt to score a goal. His eyes burned black with fiery resolve when he was getting to his feet after being knocked down in a scrum. His spirit may have been indefatigable, but it was certainly too slight and insignificant an energy force to float now in the air around us or affect an earthly soccer match, much less send me a sign that heaven is a great place, with new goal nets and soccer fields boasting clean white lines and freshly mown grass. I know this because I’d received no sign, no premonition, no inkling that anything had happened until taking a phone call from a guy at a hospital. And I’ve felt absolutely nothing since.

More clapping and shouting from our side. I automatically raise my arms to join them, but pause when I notice a ladybug crawling determinedly up the grey left sleeve of my hoodie sweatshirt. Strange time of year for a ladybug, and this one seems a bit undersized, albeit richly colored red with shiny black spots. Up, up, up my arm it crawls, until it gets to my shoulder. There it stops, obviously enjoying its new place in the pale winter sunshine.

“Let’s play Pokémon!” a younger Robbie would shout when I arrived home from work. His favorite cartoon character was Pikachu, a yellow, striped, magical creature who used to ride around on the shoulders of its human friend, Ash. “I’ll be Ash and you’ll be Pikachu,” I’d say, stating the obvious, and then I’d hoist him onto one shoulder and we’d run around the house doing magic until my shoulders ached. The ache exists now. The magic doesn’t.

“Yeah yeahhhhh! Way to go, Jared!” We’ve scored another goal, from a header, according to the cheering of our team’s parents. I find myself cheering, too, but not clapping this time because I don’t want to disturb the little insect perched there on the front of my shoulder, now sheltered from a chilly breeze. A swarm of red-and-black-clad kids greets Jared with high-fives at the top of the penalty box after his goal. The team is now winning 2-0.

Jared and Dillon left voicemail messages on Robbie’s cellphone after he died. “I miss you, Robbie,” they said in sobbing, scratchy, tearful voices. They miss his laugh, his long goal kicks, and the way he looked so angry when the coach substituted him. I do, too. They also said they’ll feel him on the field with them. I don’t.

The ladybug flutters its wings but remains where it is. That soft winter sun must feel good to a little bug who should probably be hibernating or lying dormant under a leaf or in a hole somewhere this time of year. Before this soccer field was built, this place was just ragged, undeveloped mesas on the edge of a remote canyon, filled with sage, manzanita, chaparral, grasses, wildflowers, and a few scrub oak. Robbie and I rode our bikes up here and explored the nooks, crannies, and canyons, and one time we disturbed a whole mess of ladybugs when we veered off a path and crashed through some bushes. Dozens of them whirled in the air around us, but that was in summer, and years ago. Now all that is gone, replaced by a school on the east, condos and houses to the west and north, and parking lot everywhere else.

Robbie always wore a big-league soccer jersey to the pro or college games we’d attend together. I remember him sitting beside me at the stadium last year when Los Angeles Galaxy played mighty Real Madrid from Spain, wearing his official David Beckham replica Real Madrid shirt, staring intently at the defenders, absorbing their tactics. It’s how he learned to celebrate the occasional goal he’d score: turn away from the goal and raise both fists in a “V” above his head while running towards his teammates to celebrate.

Yet another goal by Dillon! This time I notice the building excitement and clap harder—three goals is a team high for this season. Dillon throws both his fists up in a “V,” his flushed and smiling face beaming under scraggly blond hair. He’s exhausted, and the coach quickly substitutes him before the game restarts. Meanwhile the ladybug sits perfectly still despite the shaking and thumping of my arms inside my sweatshirt. I start watching the play more intently and notice that the kids are passing well, controlling the ball, dominating the game. That’s a first. They are a feisty lot, always having to scrap for every point—no goal, no game, no win is ever easy.

Before I know it Carrick and Scottie have also scored, and we’re ahead 6-0, a margin that hasn’t occurred ever with this group. “Maybe Robbie’s out there playing after all,” says one of the fathers near me on the sideline. I roll my eyes, but nevertheless bark some encouragement and soon our lads are peppering the opponent’s goalkeeper with shots.

“Thweeeeet!” The referee’s whistle ends the game. Our team quickly forms a happy little cluster at midfield, jumping up and down, holding their hands and heads high. Dillon leaps forward off the bench with the red number “7” jersey in his hand and sprints out to join them, swirling the jersey in a circle above his head.

As I clap, I notice that I’m smiling for the first time in five weeks. Then I look down my sleeve at the ladybug. It flaps its wings a couple of times and takes off, floating quietly out over the field, disappearing from view somewhere above the kids in red. 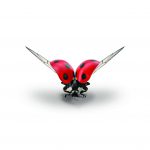 “Standing on the Sidelines” was first published in the Whitefish Review and is reprinted here with permission. Wabash Soccer honors Robbie’s memory each fall with the Robbie Dreher Classic.