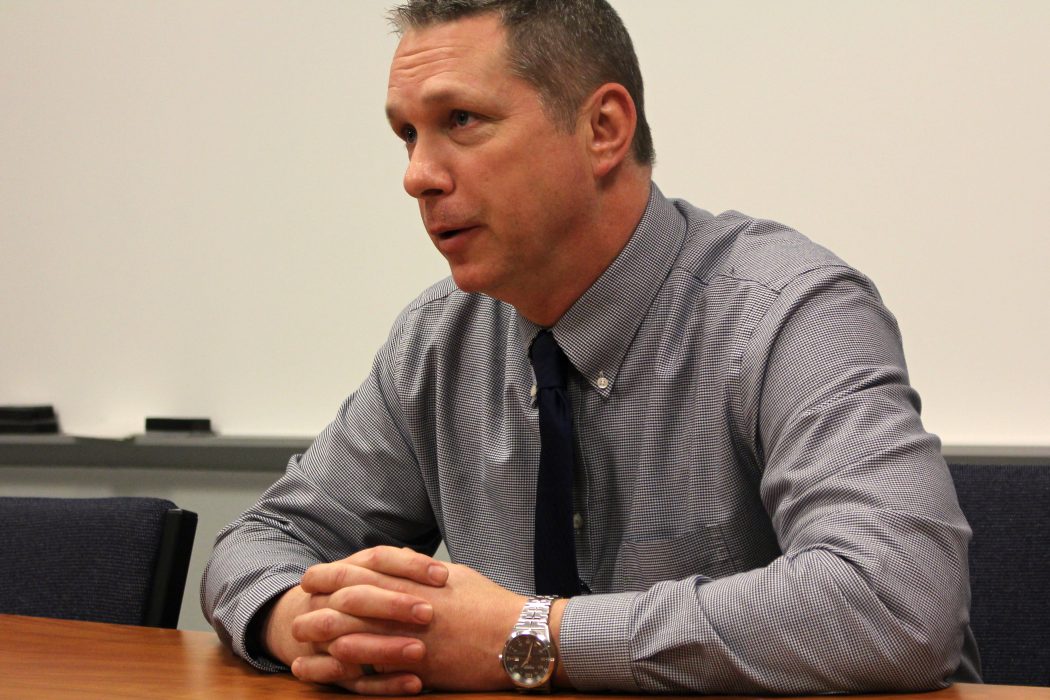 Crawfordsville Police Chief Mike Norman shares his father advice that still guides him every day on the job. 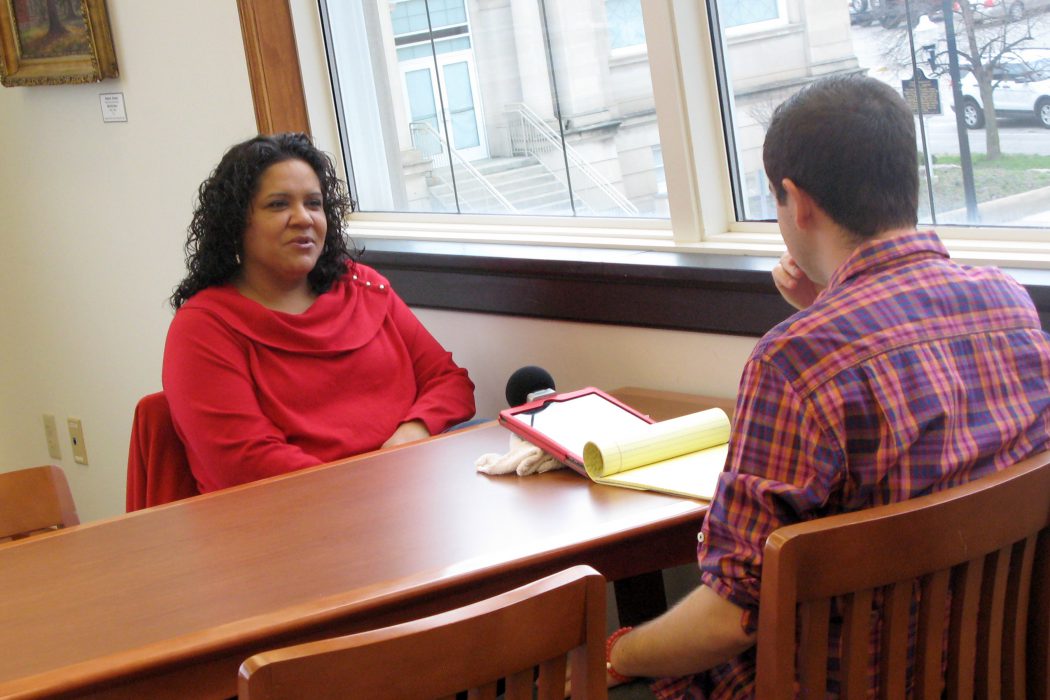 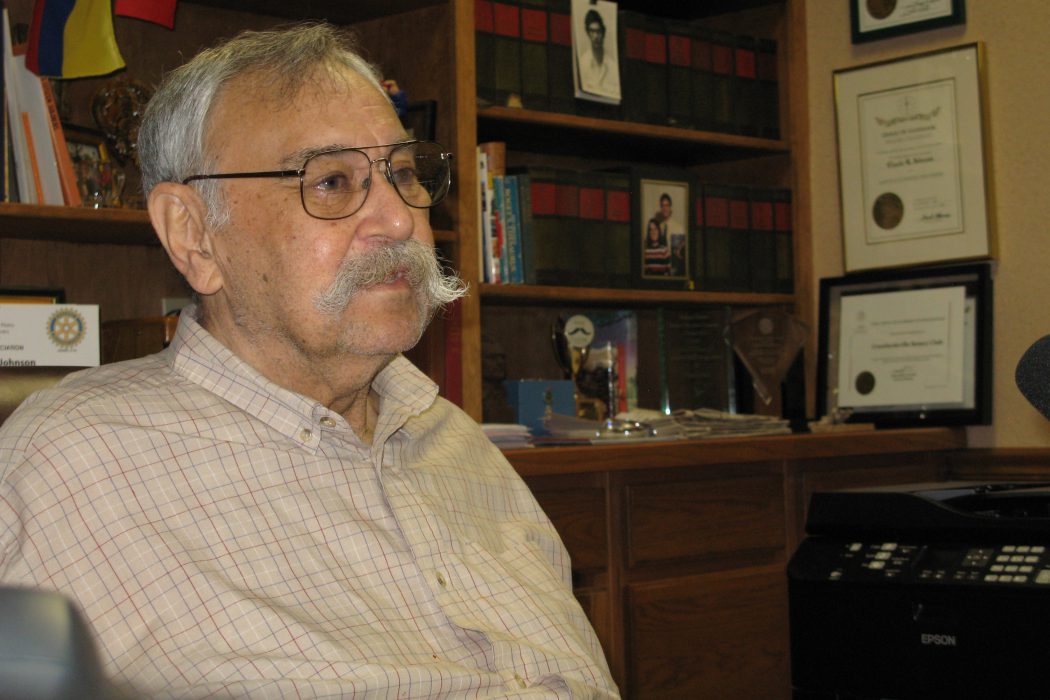 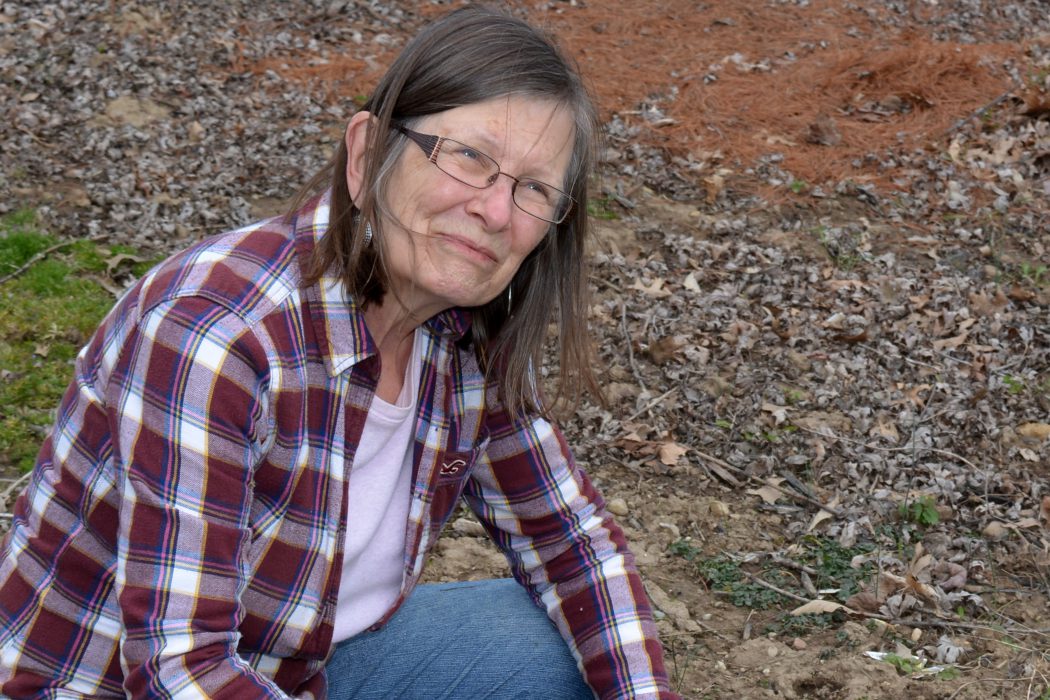 Helen Hudson taught her students how to be engaged and empowered citizens by becoming national advocates for Amtrak’s daily train service to Crawfordsville. 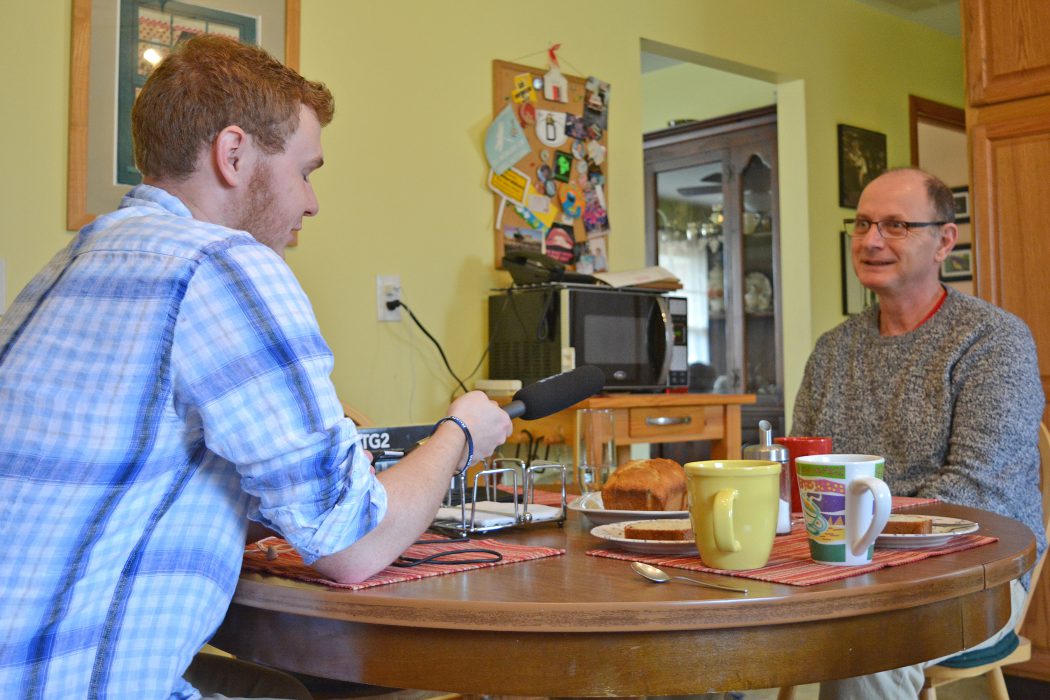 Brent Poling ’16 talks with Paul Hutson as they prepare to record Paul's stories.

“Every house I lived in while I was growing up was struck by lightning.”

What sounds like a great first line for a short story or novel is actually long-time Crawfordsville resident Paul Hutson recalling a childhood memory for the Humans of Montgomery County project and Web site. 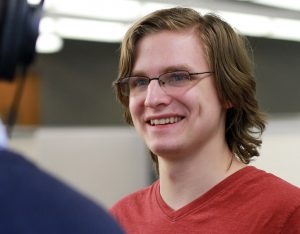 “My father was taking a bath and lightning struck while he was standing in the tub, but didn’t shock him,” Hutson says in the audio recording detailing one of those strikes. “The bolt followed the television cable, went under a picture window, scorched the drapes, and rolled a rather large fireball out of the television set.”

The tale only gets better from there.

It’s one of many stories shared by Montgomery County residents who were interviewed and recorded last year by Wabash College students in Professor Jill Lamberton’s Audio Rhetoric and Creative Writing course. An audio-recording-based variation of the wildly successful Humans of New York Web site and books, the Humans of Montgomery County  presents 10 stories from 9 of those interviewed, including:

•  a city police chief recalling his father’s advice and how it guides him every day on the job;

•  a social worker recounting the downward spiral of her college-era drug addiction and her struggles to recover, and her daughter who completes the story as a living witness to that successful recovery;

• a retired insurance man describing the genesis of his ongoing project to send “outdated” fire trucks from Indiana to villages in Mexico, where they find new life serving thousands;

• a teacher who taught her students how to be engaged and empowered citizens by becoming national advocates for Amtrak’s daily train service to Crawfordsville;

• an outdoorsmen who had moved out of state but returned to live closer to family, and is now an advocate for local natural resources like Sugar Creek and Shades State Park;

• a dancer, choreographer, teacher, and title company administrator whose response to a potentially debilitating disease is to reconnect with her family and live as fully as she can, one day at a time.

“They wanted to get to know these citizens of the College’s hometown, to listen, and to learn.”

The stories were recorded by young men who—at 19 to 22 years old—are members of an age group not often singled out for its ability to listen. Yet for this project, Lamberton says, they not only listened well, but many displayed the understanding, wisdom, and empathy you’d hope for in much older men and women.

“These members of our community were so generous in telling their stories and granting us permission to share them with the world, and the students fully embraced this project,” Lamberton adds. “They wanted to get to know these citizens of the College’s hometown, to listen, and to learn.”

Students begin the course recording personal stories from their own lives and from friends or family members, then listen to and constructively critique one another’s work. The Humans of Montgomery County took those listening and technical skills off campus and into our local community.

“In designing the project, I worked closely with Associate Director of Communications Richard Paige and Wabash Magazine Editor Steve Charles to invite Wabash students and Montgomery County residents to engage in positive, personal interactions with each other,” Lamberton says. “Such interactions can be more rare than any of us might expect or hope.”

She recalls the words of one of her students, who wrote at the end of the semester: “Every assignment was challenging and forced me to grow as a citizen and student. Continue to force the guys out of the Wabash bubble. That taught me as much as anything.”

The project included class sessions on “on location” audio recording and editing, interviewing, and photography taught by Audio and Video Technician Phillip Merriett, Paige, and Charles. Administrative Assistant Violet Benge and Director of Student Engagement and Success Heather Thrush were invaluable in making connections with the community residents who were interviewed. Funding for the project was provided by a Lilly Endowment Faculty and Staff Mini-grant through the Center for Innovation, Business and Entrepreneurship.

“Changing lives at Wabash means much more than preparing students for a lucrative career,” Lamberton said late last year when she was granted tenure at the College. “English professor Anne Hall was recently quoted in the New York Times as saying that college should be a time and place to develop ‘the muscle of thoughtfulness, the use of which will be the greatest pleasure in life and will also show what it means to be fully human.’ I couldn’t agree more, and I am so grateful to have found in Wabash College a place where a dedicated staff and faculty teach and mentor students—both in and outside the classroom—in a way that calls them to grow into more thoughtful, confident, engaged human beings.”

Lamberton plans to include the Humans of Montgomery County project in this spring’s Audio Rhetoric and Creative Writing Course. You can hear the first year’s stories here: http://blog.wabash.edu/humans/