Campus Is Closed, and Yet…

“Dear Friends, I bid your prayers in this Christmas season.

“Let us pray for those like Mary and Joseph who lack a safe place to spend the night—for refugees from war and famine, for the homeless in our cities…”

Those lines begin the prayers Professor Bill Placher ’70 used to offer at the end of the College’s Christmas Festival of Music and Readings in the Chapel every year in the Chapel, an event begun at Wabash by Bill’s mentor and friend Professor Eric Dean H’61. After Eric died, Bill carried on the tradition until his own death in 2008.

If you first attended the festival after that time and the words seem familiar, that’s because Bill’s close friend and classmate, Professor David Blix ’70, has used some of them as a framework for his own concluding prayers for the festival ever since he began carrying on the tradition—one beloved teacher bringing into the present some small essence of another.

As I was photographing this year’s festival in the Chapel, heard David’s prayer, recognized some of Bill’s words—even his cadence—in David’s voice, I felt first the ache of loss, then a surge of gratitude. I work in a place where traditions are handed down from teacher to student, friend to friend. Where the deeper story behind our traditions shapes and defines this place. 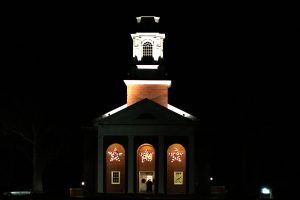 The Chapel on the night of this year’s Christmas Festival.

In my 21 years at Wabash I have heard Bill’s prayers and talks in that Chapel. I’ve photographed 21 classes of seniors at Baccalaureate there. I’ve sat among so many unexpected friends in those pews, one moment laughing as Hall Peebles H’63 or Vic Powell ’55 excoriated the Dannies, the next barely keeping my composure as Rev. Rob Lamborn eulogized Professor Marc Hudson’s son, Ian, or Professor Anne Bost remembered Luke Borinstein ’19. I remember Bill leading us in prayer when Tony Lobdell ’05 had disappeared in Argentina. I recall looking out at so many people who had come to remember Nancy Doemel last summer on a very hot day. I remember Bob Allen ’55 beaming as Betty was named an honorary alumna there, and how he helped her down the steps and kissed her.

The Chapel is not a church building, but it is a spiritual place. A place of beginnings—ringing in, baccalaureate, weddings. A place for endings. As I sat there on the floor listening to David Blix praying some of Bill Placher’s words first spoken in the service Eric Dean began, there seemed multiple lives sharing the same space, and I felt my past and present intermingling (and, yes, I will be seeing a professional about this.)

In my first year at Wabash I read Byron Trippet’s Wabash On My Mind and his words well-known here: “The poetry of a College is to be… found in the fact that once on this familiar campus and once in these well-known halls, students and teachers as real as ourselves worked and studied, argued and laughed and worshipped together, but are now gone, one generation vanishing after another, as surely as we shall shortly be gone. But if you listen, you can hear their songs and their cheers.”

I’ve reprinted those lines in Wabash Magazine several times through the years, admiring their elegance and trusting them to be true for many who attended or worked here, wondering if I might ever hear those long-past songs and cheers. But what I hear now, especially in the Chapel or Center Hall after hours, are quieter voices. Sometimes a prayer. Sometimes a story. Sometimes a kind word, encouragement. Tom Campbell’s laugh. Steve Webb practically yelling “Mr. Charles” so loudly as I walked into his office that you’d think we were both half deaf, which we were. I hear Bill Placher listening in that second floor office, if that makes any sense at all.

I was thinking about all this Monday, the day after Christmas, as I Iooked out on the campus officially closed for the holiday, students safe at home or with friends, faculty and staff getting a much needed time off. To almost anyone walking by, the campus looked deserted. No cars in the parking lot. Center Hall and the Chapel completely empty.

But you know better.

P.S.  If you want to read Professor Placher’s prayer, contact archivist Beth Swift, who keeps a copy in the “Placher Corner” of the Archives and was kind enough to point this out to me.