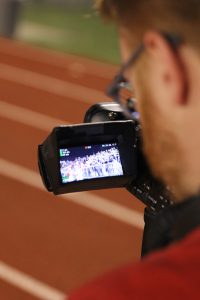 Cramer behind the camera at the Albion game.

One of the most iconic images of the College’s fall semester was captured by a Wabash senior.

And because he recorded it with video, he also preserved some of the semester’s most memorable words.

Communications and Marketing intern Ben Cramer ’17 had followed Wabash Football Coach Don Morel onto the field after the Little Giants’ riveting season-opening victory at Albion. It was Morel’s first win as the Little Giants’ head coach and came after the team had lost the lead in the fourth quarter, battled from behind to force overtime, then dominated that final session with a heart-stopping series of plays.

As our large traveling contingent of fans rushed the field, the team took a knee in the center of the field around their coach.

Several of us were photographing the moment, but Cramer had been watching the scene develop. He started filming even as he worked to find the best angle (as you can see in the raw video footage above). He listened carefully to Coach Morel’s words…

“…Wabash Always Fights, the Gentleman’s Rule, it applies doesn’t it…”

Cramer zoomed in for a close-up just as the coach said:

“It applies. When we struggle, it will carry us…”

and stayed in tight as Morel continued:

“Wabash Always Fights. You’ve got to believe in that stuff. It works.”

In the stands only minutes earlier, Jay Fisher ’66 had told us that “’Wabash Always Fights’ means so much more than sports. It is the mantra of Wabash. It means you give your complete attention, full effort, reach down deep to accomplish the best beyond what your best might be.”

Pairing that quote with Coach Morel’s statement would capture the essence of Wabash for our story.

As the team celebrated the victory, I asked Ben if he’d been able to pick up audio from Morel’s talk. He just smiled and nodded.

You can see the raw video above.

Take a look at “You Gotta Believe,” the final edited video we published earlier this fall and can see that zoom, a decision admired by the teacher he was working for, Wabash Videographer and Digital Content Editor Adam Phipps ’11.

“I can’t say how Ben made the decision, but I’d guess it was instinct,” says Phipps. “By staying in the moment, listening to what was being said, he sensed this was about to be the crucial moment.”

Just one of many captured by the senior English major and political science major for the Wabash Magazine story “Traveling Well,” arriving in mailboxes early next week.

Cramer also shot and edited multiple videos introducing pieces in that magazine along with several separate pieces for Communications and Marketing. It’s a remarkable three-month body of work when you realize he was also taking classes,performing in the Wabash Theater play “Peter and the Starcatcher,” and preparing for Senior Comprehensive Exams.

“When Ben traveled with our staff to Albion, it was fun to watch him step into that role as one of our team,” says Communications and Marketing Director Kim Johnson. “He wasn’t a student worker—he was our lead videographer, and he took that role very seriously. He looked for the opportunities to make stories better, he offered up suggestions.

“We gave him the opportunity to be part of a team, to bring forth the story from the angle he wanted to tell it, to put forth his vision, and to be able to present and defend what he thought the story was. He took that opportunity and ran with it.”

Johnson had known Cramer from covering other events on campus, but hadn’t worked with him before the Albion trip.

“I didn’t realize he was such a good collaborator or that he had such a strong work ethic,” she says. “He has such compassion, such a heart for listening, and you could see these skills at work as he listened for the stories we were gathering in Albion. They will serve him in all sorts of ways, no matter what he does in the future.”