At Homecoming in October, Class Agent Cal Black earned the Warren Shearer Award, an induction into the “Hall of Fame” for Class Agents at Wabash.

Cal has expressed his love for his alma mater so many ways over the years, but one of the most meaningful for him was the year he helped design and then raised funds for a special uniform for the Little Giants as they prepared to battle DePauw in the 100th Monon Bell Game.

Here he tells that story:

In March of 1993 Wabash Head Football Coach Greg Carlson and I were having a conversation about the upcoming football season. The subject of the 100th Monon Bell game was obviously part of that conversation. I asked Greg if he had any particular plans for the game, and while it was a way off, Greg did express that he hoped Wabash would do something special for THE GAME! 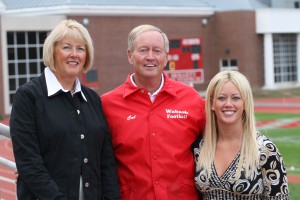 As our conversation continued, I asked Greg if he thought new uniforms would be something of interest to him and the team. Greg said that would be terrific, but he did not have any money in the budget for the new uniforms. I told Greg that I would coordinate raising the money if he could get the plan approved by the College.  Knowing this could take funds from the Annual Fund, I told Greg that when raising the money we would ask donors to give in addition to their regular gift to the College. The College approved the plan. Greg estimated the cost of the uniforms to be around $15,000 for the entire team.

I asked Greg if he would consider red pants for the new uniforms, as that color had not been worn since Ken Keuffel was coaching the single wing at Wabash in the early 1960s.  Greg liked the idea, and he said he would design the new red pants if I would design the jersey and we would then coordinate the stripes, etc. so the pants and jerseys matched.

We both went to work on the designs and finalized details of the new uniforms. The pants would be red with two white stripes and a white “W” on each side with a white belt.  The jerseys would be white with a 100th Monon Bell logo on each shoulder and with the last name of each player on the back of the jersey.  There would be three red stripes and a “W” on each sleeve. Greg was adamant about the fact that while there was a common logo for the game that included both gold and black and red and white colors—the Wabash uniforms would not have any gold or black on them!

Marty Gregor ’85 was the president of the Indianapolis Association of Wabash Men and I knew Marty well. I contacted him about the project and ask if he would help me. Marty wholeheartedly supported the idea. So we each selected about six names of former football players to call and see how they responded to this idea. There was no doubt after these calls—we were off and running!

The plan was to offer exact team jerseys—any size, with any number and name on the back to each donor if they gave $250. We would also throw in a 100th Monon Bell red logo hat. If a donor gave $500 they would get the jersey, hat and a red Wabash Football jacket. And if they gave $1,000, they would get the jersey, hat, jacket and a laser engraved official football that said, “100th Monon Bell Classic, November 13, 1993, Series 45-45-9, Wabash vs. DePauw.”

The solicitation for donors went to former football players, parents, and friends of the Wabash football program. We made sure in our fundraising efforts to ensure the donor knew this was a project above and beyond their normal gift to Wabash. The response was absolutely incredible! We had so many orders that I had to take a week off from work to package all of the orders so the donors would have their merchandise in time for the Monon Bell game and telecasts all over the country.

We also gave new Wabash President Andy Ford  jersey # 1, and we gave jersey # 100 to Director of Athletics Max Servies ’58 for display in the trophy case. We easily covered the costs of the new uniforms, plus much more that went to the College.

Greg Carlson introduced me to the sporting goods salesman with whom he had dealt in the past and told the salesman that this was “top secret”—that if DePauw learned anything of the new Wabash uniforms that would be his last sale ever to Wabash! DePauw had no idea what the uniforms looked like until Wabash charged onto the field at Blackstock Stadium on 11/13/93. However, on my weekly visits to the sporting goods store to check on the spelling of names, numbers and sizes of all of the jerseys I noticed a DePauw jersey, and guess what?  It had the common logo designed for the 100th Bell game that had both red and white and black and gold on it.  This information was passed on to Coach Carlson for “intelligence” purposes as he deemed appropriate.  Somehow, before the game the team was advised that the Dannies jerseys had red and white on them—just for informational purposes!

In the meantime, Marty Gregor had a private contact who said he would be able to produce miniature red and gold Monon Bells mounted on a wooden platform with a plaque commemorating the 100th game.  So they, too, went into production, but that was not a part of the new uniforms fundraising effort.

When all of the uniforms, jackets, hats and footballs were ready, I picked them up in Indianapolis and transported them to my home in Crawfordsville.  Coach Carlson did not want to let anyone on campus know of this, and so he instructed me to hide the uniforms at my house.

Our plan was to surprise the team after practice on Friday, November 12.

On that afternoon prior to practice, I packed my van with the new uniforms and headed to the old locker rooms in the basement of the Armory. Coach Carlson met me there with several other coaches and we unloaded the new uniforms and took them into one of the locker rooms where we hung the jerseys up with last names facing out. The new pants were placed under each team member’s jersey.

Coach Carlson conducted his regular Friday practice but ended it a little early. The entire team except for the three tri-captains— Chris Wiesehan, Eric Snively and Andy Dorrell—went into the locker room.  Carlson asked the tri-captains to come with him to another locker room where the uniforms were hanging.

I was anxious to see their reactions. When they entered they were stunned and quite emotional. Carlson asked them to put on the new uniforms. After they put on the uniforms and walked into the other locker room, the players erupted in cheers—I looked at Coach Carlson and smiled and said “I think we just won the 100th!”

Note: Wabash won the 100th Monon Bell Classic with a 40-26 victory in front of 8,400 fans, Sports Illustrated, and a national satellite television audience. The win gave the Little Giants a 46-45-9 lead in the series.