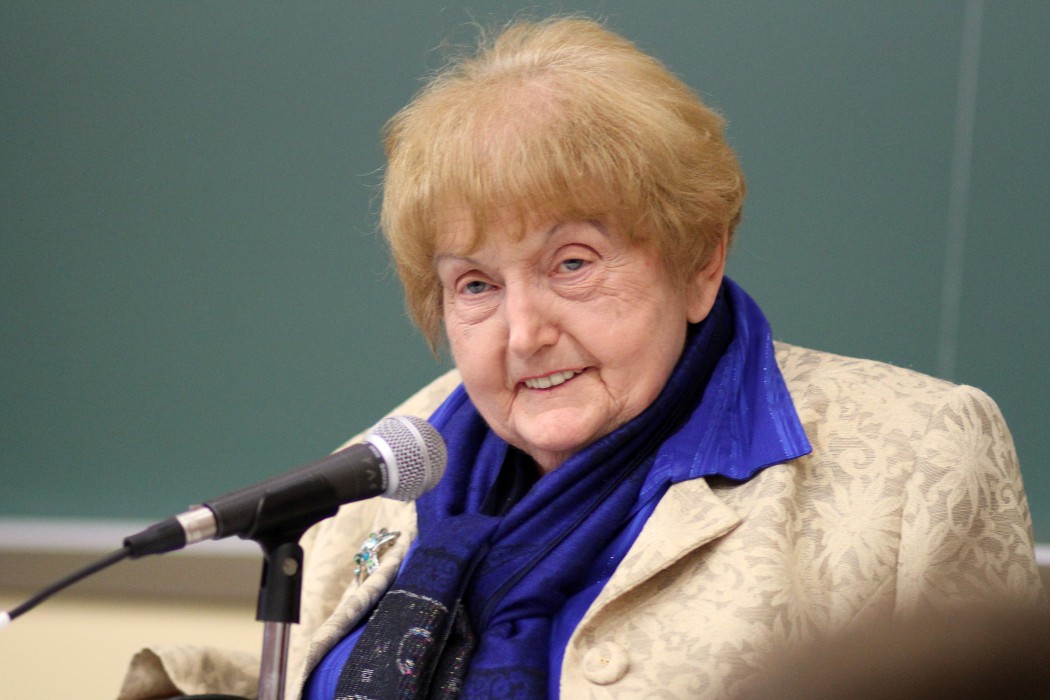 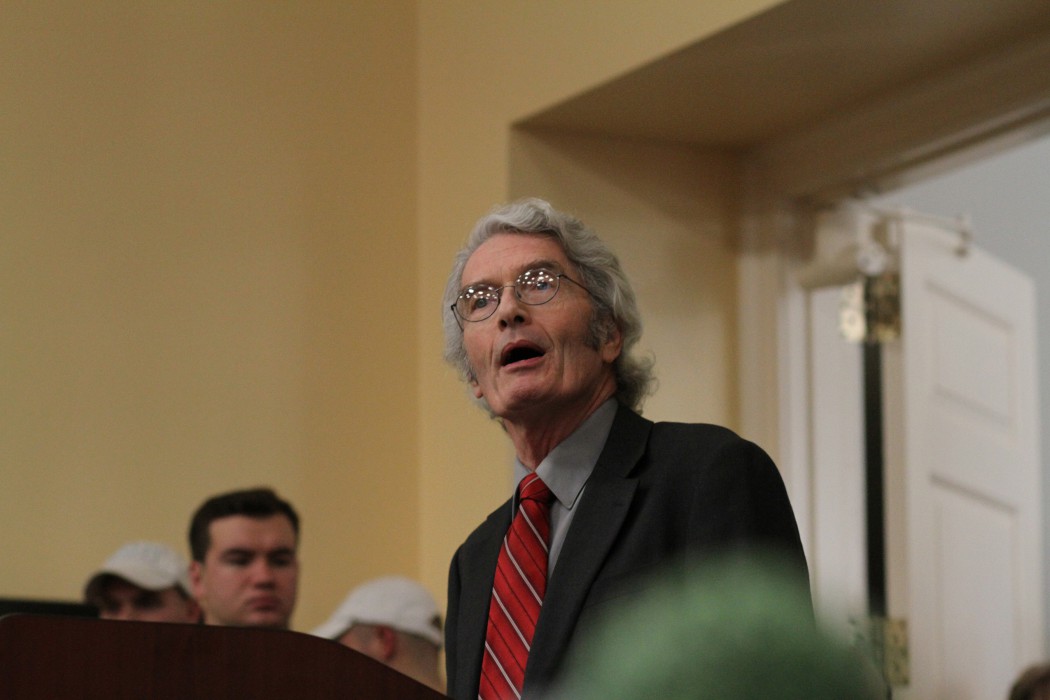 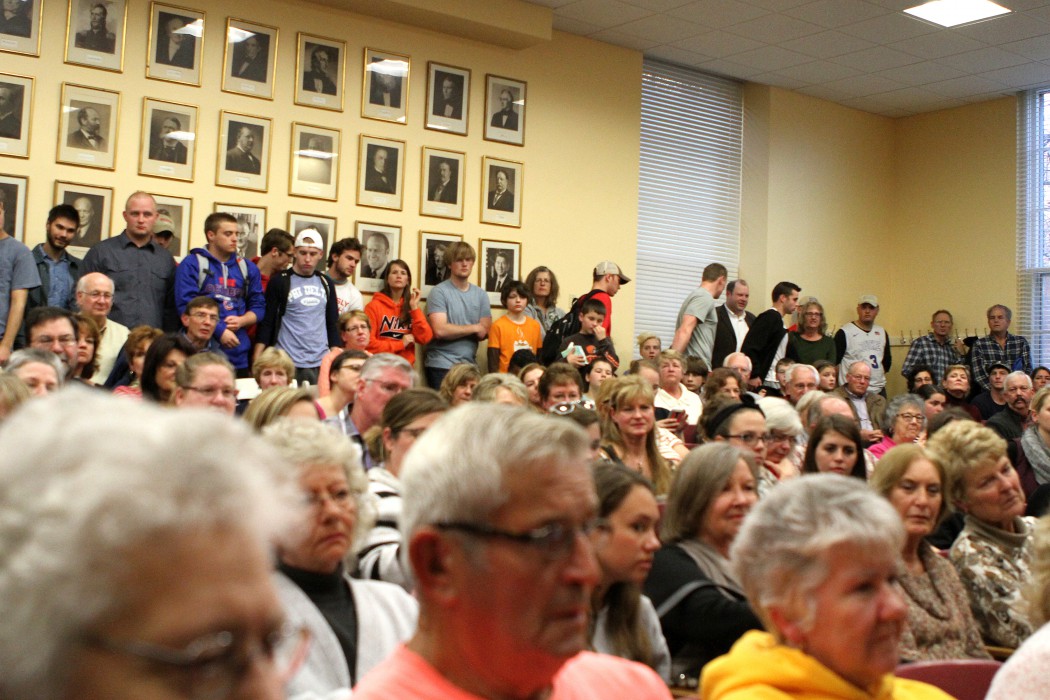 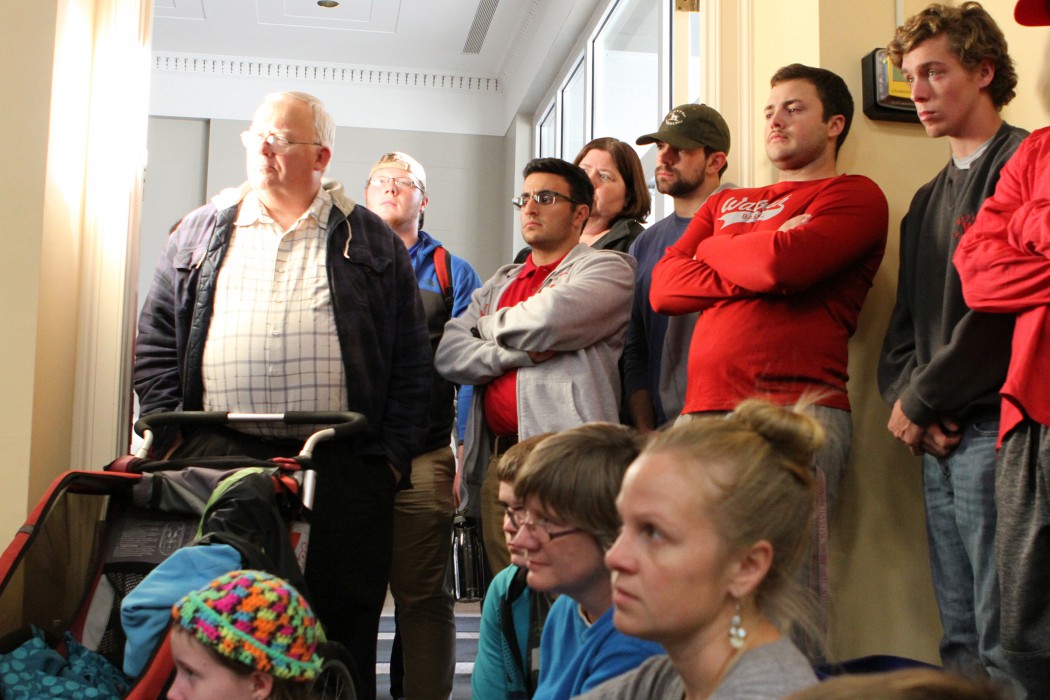 …and doorways to hear her. 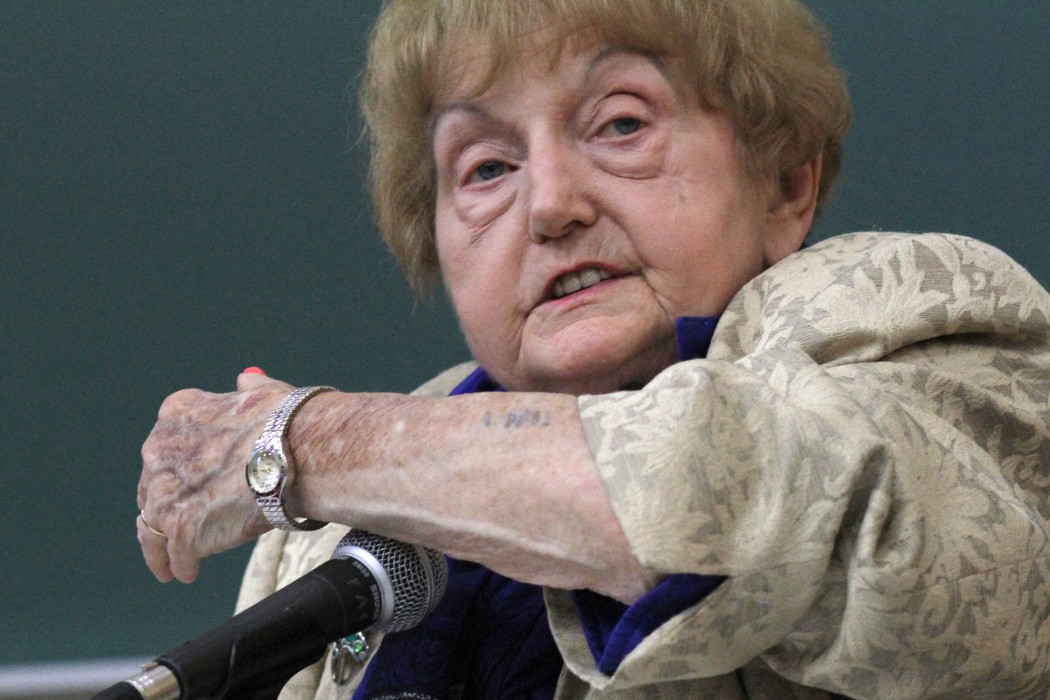 "I watched 24 little girls in front of me being tattooed. It was done with a long, heated needle dipped into ink, and dot-by-dot I became A-7063, and Miriam became A-7064.” 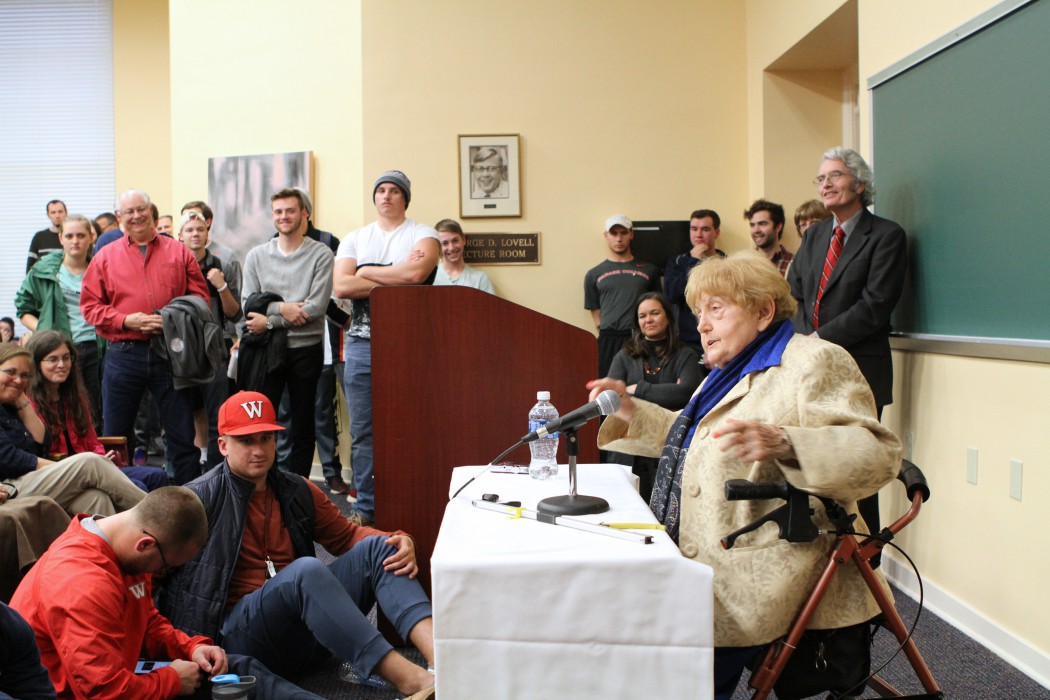 “It made me feel good that I, the victim of 50 years, I had power over the Angel of Death, and there was nothing that he could do to change what I did.” 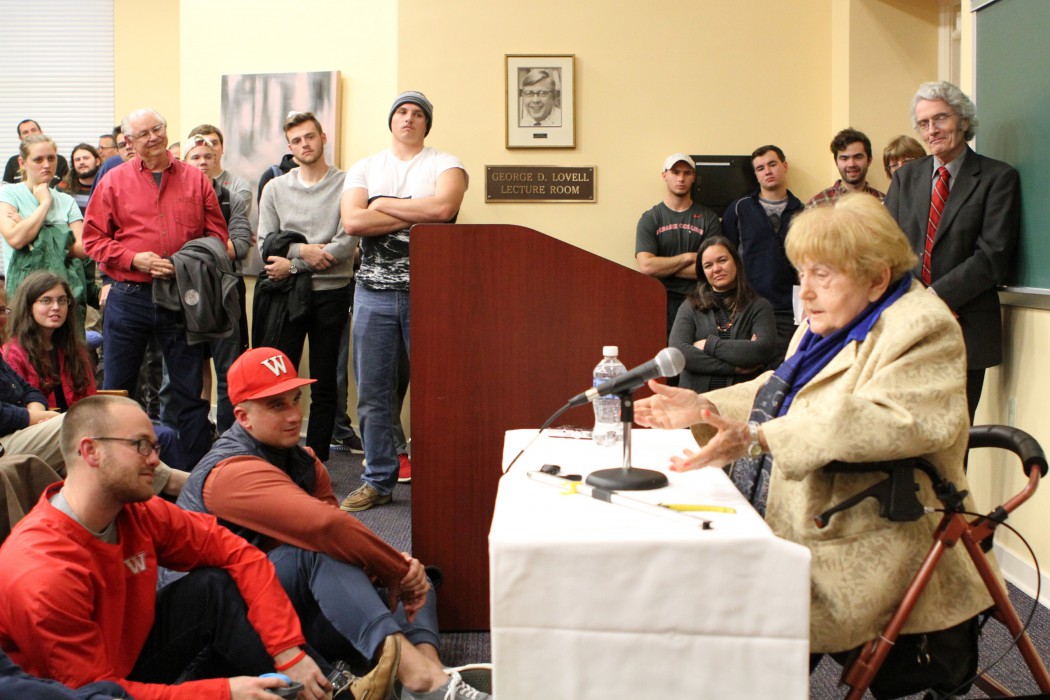 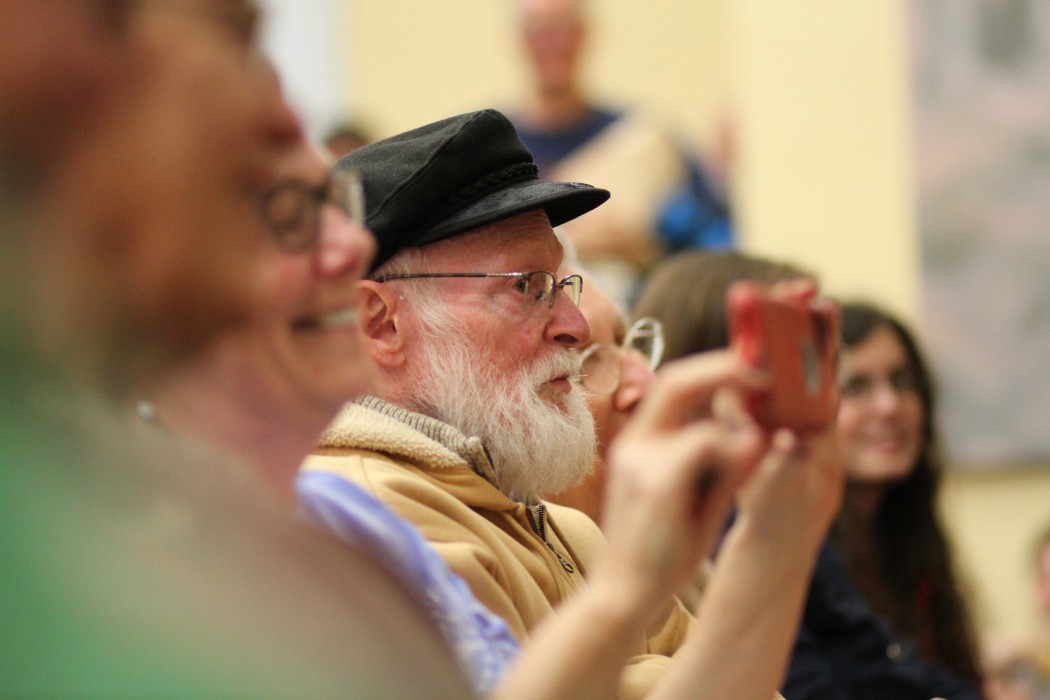 Cameras and recorders were plentiful. 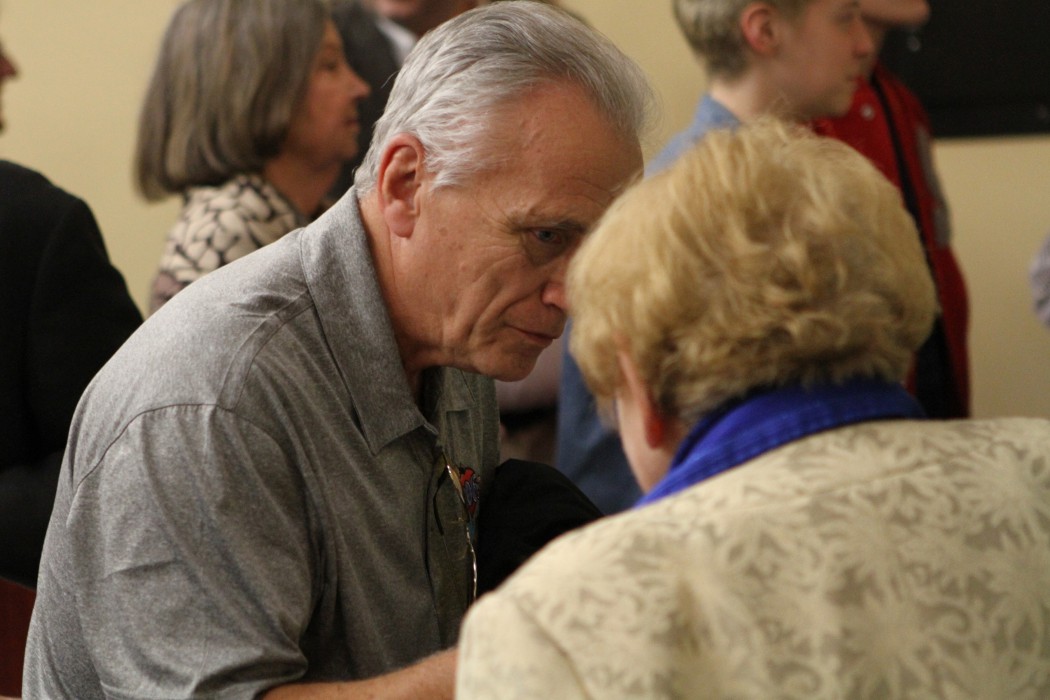 Speaking with members of the audience after her talk

Eva Kor and the Work of Forgiveness

Steve Charles—Eva Kor has told her story 156 times this year, and still more people come to hear it.

Lovell Lecture Hall has 130 seats, but Professor Gary Phillips asks the students to give up theirs so that more guests from the community can fit in. Now students line the walls, others peer in from the two doorways, and there is just enough space to step between the people sitting on the floor.

82-year-old Eva Kor pushes her walker into the room, takes a seat behind a small black-draped table at the front of the room, and leans toward the microphone.

“I am a survivor of Auschwitz,” she says.

A friend has brought her young children to the talk, and two of her daughters are crouched on the floor next to me, coloring, practically at the feet of Mrs. Kor.

I can’t help wondering, Why bring them here?

One little girl has her back turned to the speaker, the other is about the age Eva and her twin sister, Miriam, were when they were transported—along with their mother, father, and two older sisters—from Romania to Auschwitz in May 1944.

“Our cattle car train came to a sudden stop,” Mrs. Kor says. “I could hear a lot of German voices yelling orders outside. Inside the cattle car we had been traveling for four days, about 100 people. There was no place to sit on the floor, so we were standing and leaning against one another.”

“We stepped down on a cement platform where people were selected to live or to die,” she says, and she names each member of her family—her father, Alexander Mozes, her mother, Jaffa, and her sisters, Edit and Aliz—who would die there.

“I don’t think there is any other stretch of land anywhere on this earth that has witnessed so many people being ripped apart from their families forever. My mother grabbed my twin sister and I by the hand, hoping that, as long as she could hold on to us, that somehow she could protect us…

“We were crying, she was crying, and what I remember is her arms stretched out in despair as she was pulled away. I didn’t even get to say goodbye to her, but I didn’t understand that this was the last time we would see her.”

One of the children I’m sitting next to shows me a picture she has colored, I smile and nod.

“Miriam and I became part of a group of 13 twins, and we were taken to a huge processing center, our clothes were taken away, and we sat naked on the bleachers for most of the day. I watched 24 little girls in front of me being tattooed. It was done with a long, heated needle dipped into ink, and dot-by-dot I became A-7063, and Miriam became A-7064.”

The oldest of the girls on the Lovell Lecture Hall floor looks up, then turns back to her coloring. The audience laughs when Mrs. Kor tells us that her tattoo was more faded and smeared than her sister’s, possibly because Eva bit the Nazi who was holding the needle.

“I never let any doubt seep into my mind. I had an image of how Miriam and I would walk out of that place alive, and I never let go of that image until the day we were liberated.

“We had an unbelievable determination to live one more day.”

“There were little girls in our barracks from age two and a half to 16. Josef Mengele would come in every day but Sunday to inspect us. I was used in two types of experiments…I became very ill after one of the injections with a very high fever that I tried to hide, because the rumor in the camp was that anyone taken to the hospital never came back.”

My feet are falling asleep, so I’m relieved when one of the girls moves closer to her mother to get another page from the coloring book, and I can stretch one of my legs.

“I was taken to the hospital, and in the morning Dr. Mengele stopped by with four other doctors, looked at my chart, laughed sarcastically, ‘Too bad, she is so young. She only has two weeks to live.’ I knew he was right, but I refused to die. And I made a second silent pledge—that I would survive and prove Mengele wrong…

“After two weeks my fever broke and I was released and reunited with my sister, Miriam, and the other twins. But the happiness of our reunion was short-lived. Miriam looked like the people I had left in the barrack of the living dead. I asked her what happened, what did they do to you, but she would not talk about it.

“Miriam and I never talked about Auschwitz, never even said the word Auschwitz to each other, until 1985.”

The talk has gone on for 45 minutes and the girls are still quietly drawing and coloring, though their younger siblings are getting squirmy. How much of this are they taking in. How much of this is too awful to listen to? Are the words washing over them, the way my family stories did when I was their age and playing on the floor at my grandparents while the grownups talked? Is it enough just to be in same room with this woman?

“I’ve tried to analyze why we did not talk about it, and I realize that children who’ve had to fight for their lives cannot go back to those experiences because they do not trust the world. And for us that did not happen until 1985.

“That’s when I asked Miriam what happened to her when I was taken to the hospital, and she said that she was put in isolation, and that the Nazis were waiting for two weeks for something to happen.  But I told Miriam, ‘It didn’t happen. I had spoiled the experiment, I hadn’t died in the two weeks Mengele said I would die.

“According to the Auschwitz Museum, if I had died, Miriam would have been killed with an injection to the heart, then the Nazis would have done comparative autopsies on us. According the Museum, Mengele used 1,500 sets of twins, 3,000 individuals, in his experiments, and they estimate that the number of survivors when Auschwitz was liberated was 200 individuals.”

Mrs. Kor peers over at the children I’m sitting next to several times, sees that they are coloring, not paying attention to her, and she doesn’t seem bothered at all. Once she even smiles.

“How does a ten-year-old child cope with Auschwitz? Children cope completely differently than teenagers or grownups. They cannot project forward and backward—it takes all their emotional energy to cope with the here and the now.

“I thought the whole world was one big concentration camp until an airplane appeared over the skies at Auschwitz and flew very low, and I could see the American flag on its wings, and that gave me hope. That somebody was trying to free us, and hope in Auschwitz was in very short supply…

“Late in January we woke up and it was very quiet. We went outside, it was snowing heavily, in the distance I saw lots of people all wrapped in white camouflage, they didn’t look like the Nazis. So we ran up to them. They gave us cookies and hugs, and this was my first taste of freedom.”

Mrs. Kor ends her talk with what she calls her life lessons:

•  Never ever give up on yourself or your dreams—become the best you that you can be.

•  Don’t be prejudiced, and be kind—the smallest act of kindness adds one or two years to your life.

“If you would have told me 23 years ago that I would forgive the Nazis, I would have told you to get a good psychiatrist,” she says. “I was very angry with the world, and I hated everybody.

“Nothing changed much until Miriam died June 6, 1993, and I could not get to Israel in time for her funeral. I was left with a lot of pain. I’d wake up many nights suffocating; I could feel how Miriam died when the cancer filled her lungs. I knew I would do something in her memory, and I opened CANDLES Holocaust Museum and Education Center and the nightmares stopped.”

She has since forgiven in person and in writing a Nazi doctor, and in April 2015 shocked the world when she hugged a former SS officer known as the “bookkeeper of Auschwitz.”

She calls the letter of forgiveness she wrote to Dr. Hans Munch “life-changing.”

“When someone takes away your rights over your body or mind or both by force, you become a victim, and all victims feel hopeless, helpless, and powerless. Writing that letter I discovered I had power—I had the power to forgive.”

She wrote a letter of forgiveness to Josef Mengele: “It made me feel good that I, the victim of 50 years, I had power over the Angel of Death, and there was nothing that he could do to change what I did.”

She tells the story of a ceremony she attended with Dr. Munch at Auschwitz marking the 50th anniversary of its liberation, where Munch signed a document confessing the existence of the gas chambers and his participation there, and Mrs. Kor read a document forgiving the Nazis.

“I immediately felt the pain that I had carried around for 60 years lifted from my shoulders,” Mrs. Kors says. “I was no longer a victim of Auschwitz.”

The audience offers a standing ovation. The children pick up their coloring books as their mom gathers up the youngest child, and I get my first chance to move forward and photograph the room. I use a wide-angle lens to fit in as many people as I can and notice that, other than the students, the majority are middle-aged or older. The little girls are barely in the picture.

When the oldest of these girls is Eva Kor’s age, many if not most of the people in this room will be gone. I wonder what of this day, if anything, this girl will remember. Mrs. Kor’s advice? I doubt it. Her survivor’s story? Maybe, if she reads it later or her mom tells it to her.

If, decades from now, someone tells her there was no Holocaust, no such evil, no such power in forgiveness, will she remember enough to stand and say she saw a woman who survived, saw the number on her forearm, heard her say “forgiveness is the best revenge”?

I can’t help wondering, Could it be that these little girls were doing the most important, most enduring work in the room?