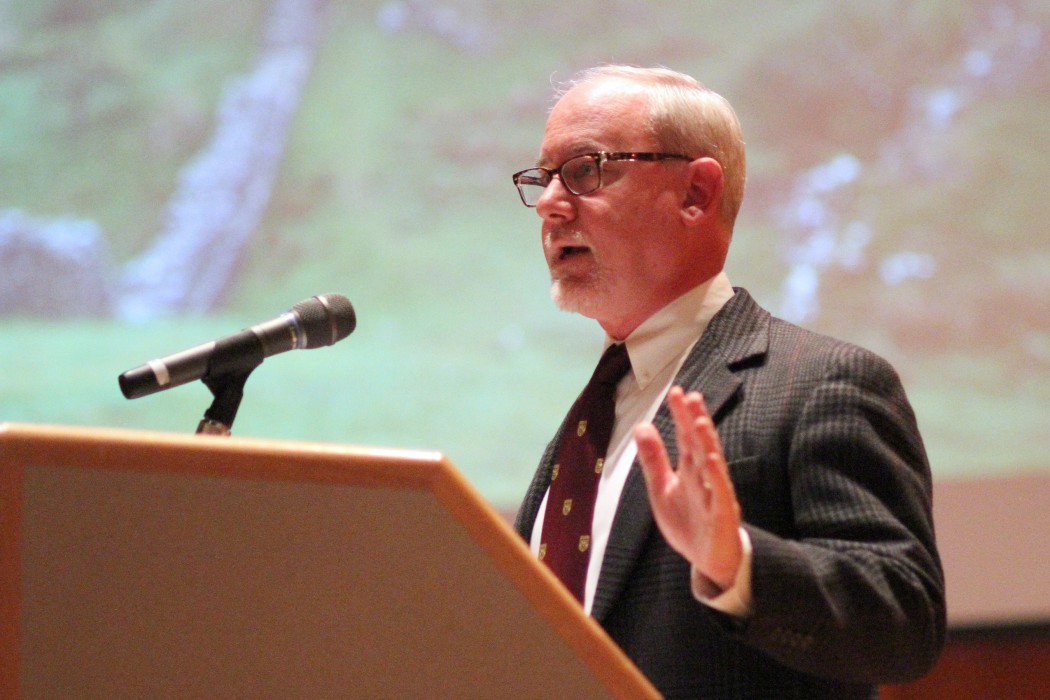 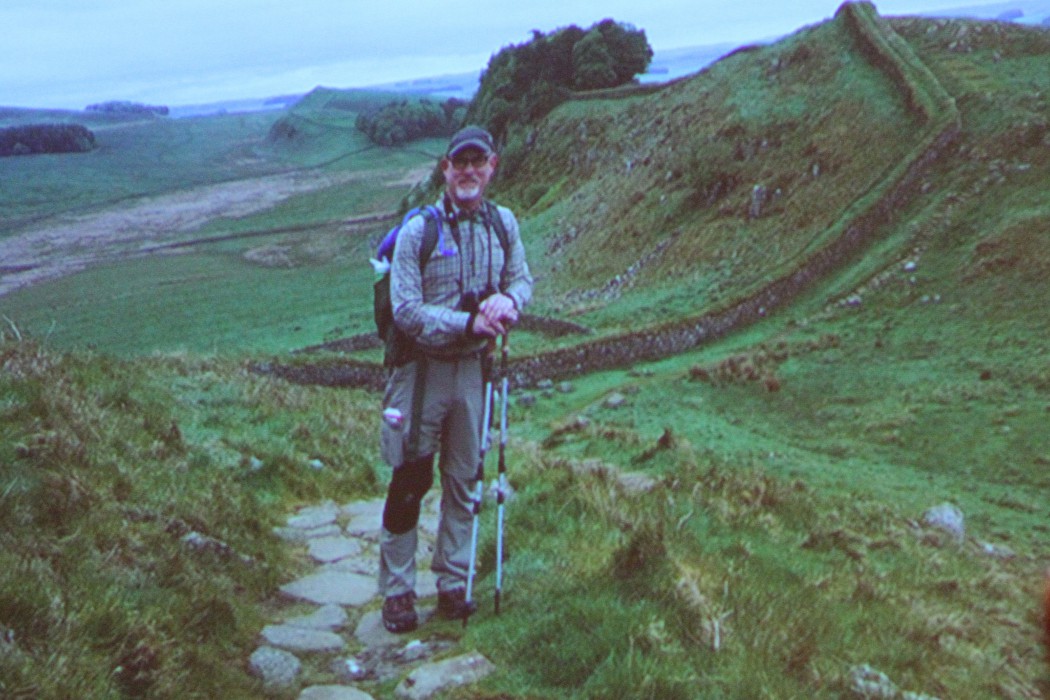 Royalty's talk included a few photos from his 112-mile walk along Hadrian's Wall. 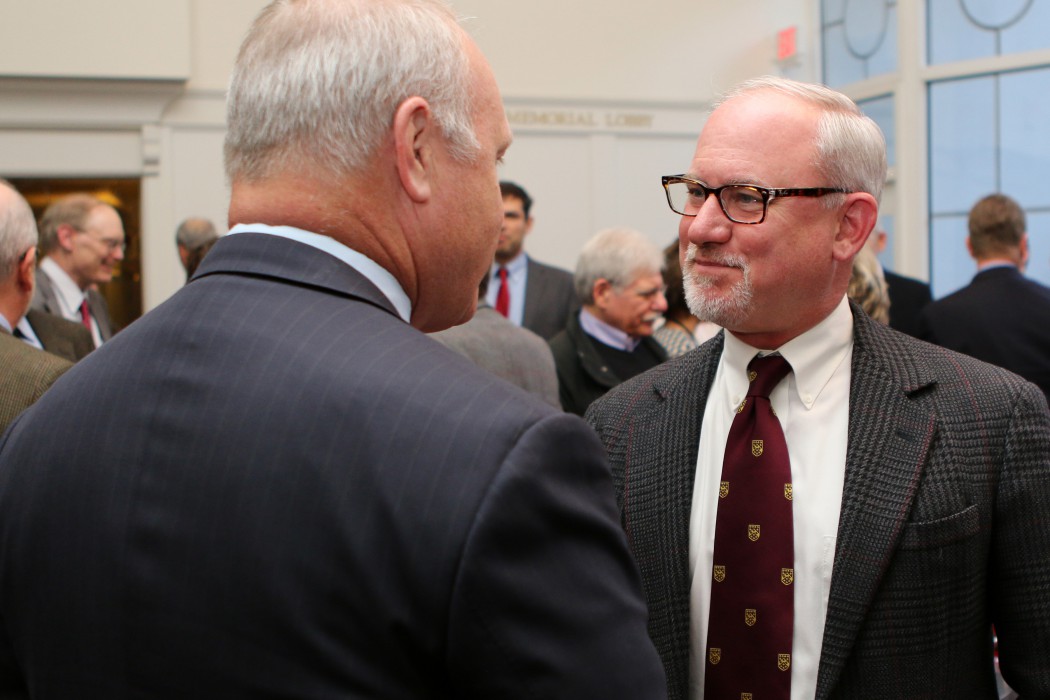 Royalty is congratulated after his talk. 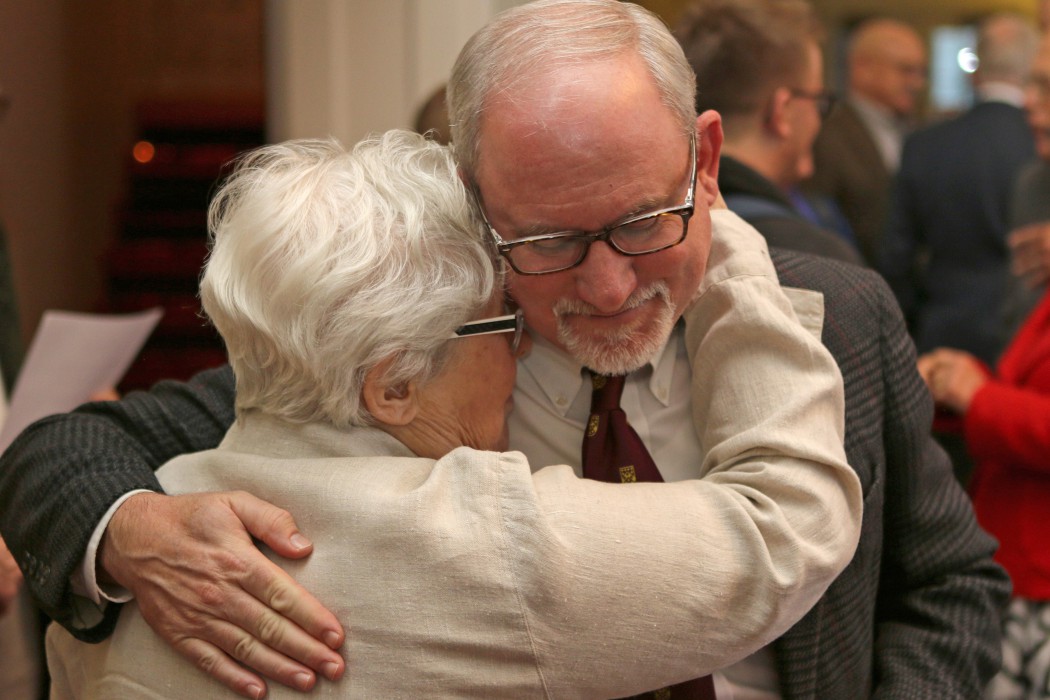 A hug from his mom… 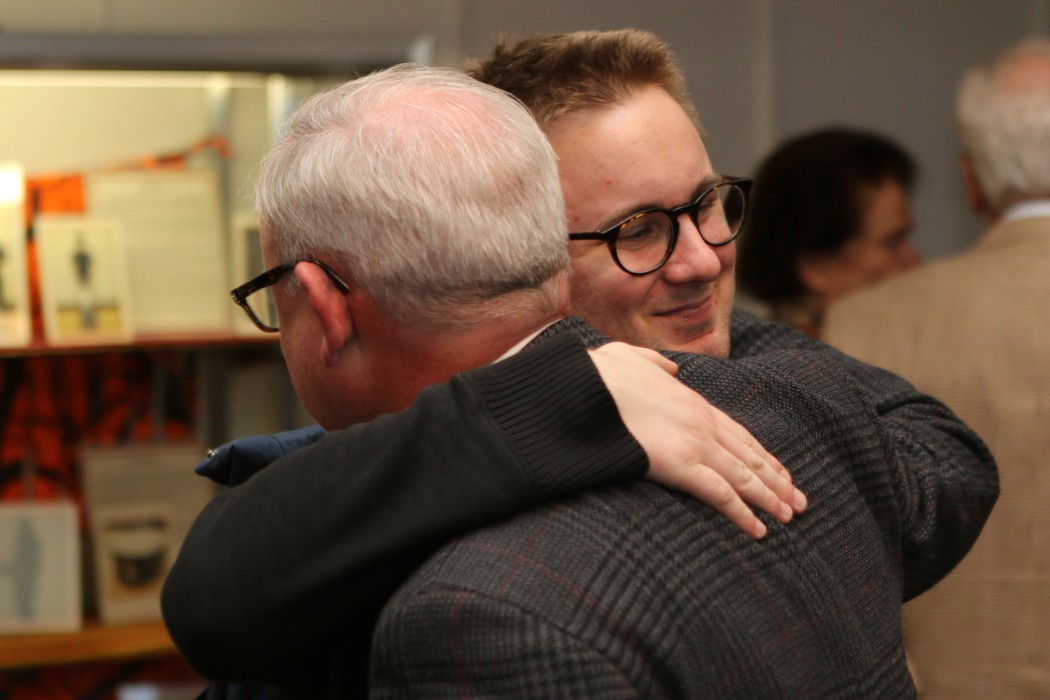 …and his son, Nolan. 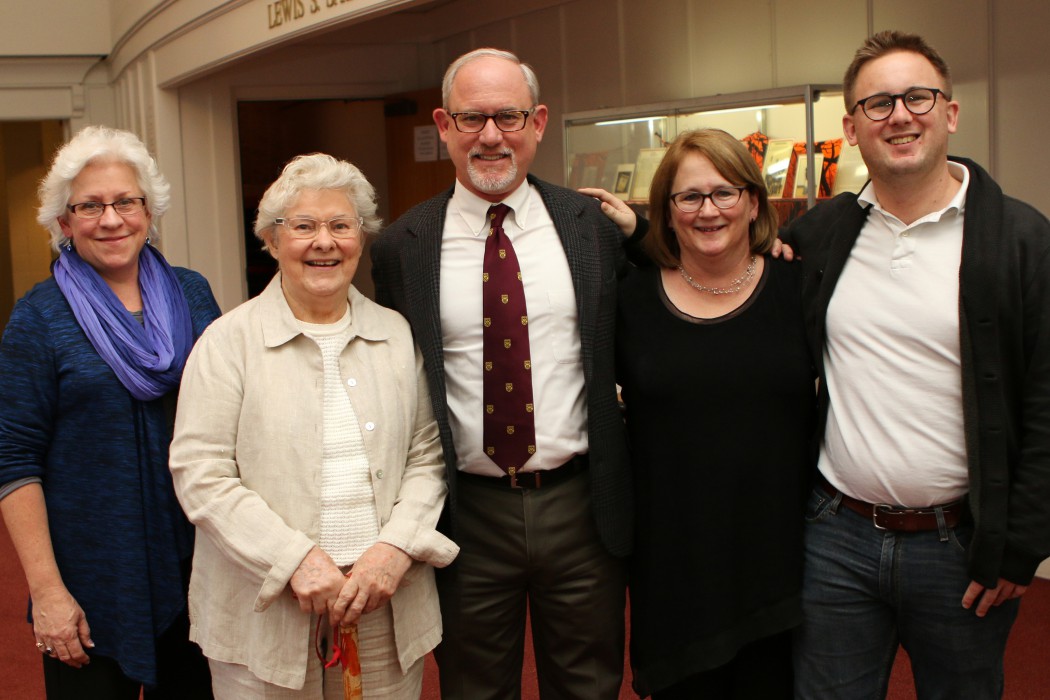 Royalty's sister, Beth, his mother, his wife, Anne, and son, Nolan, were there for the big day. 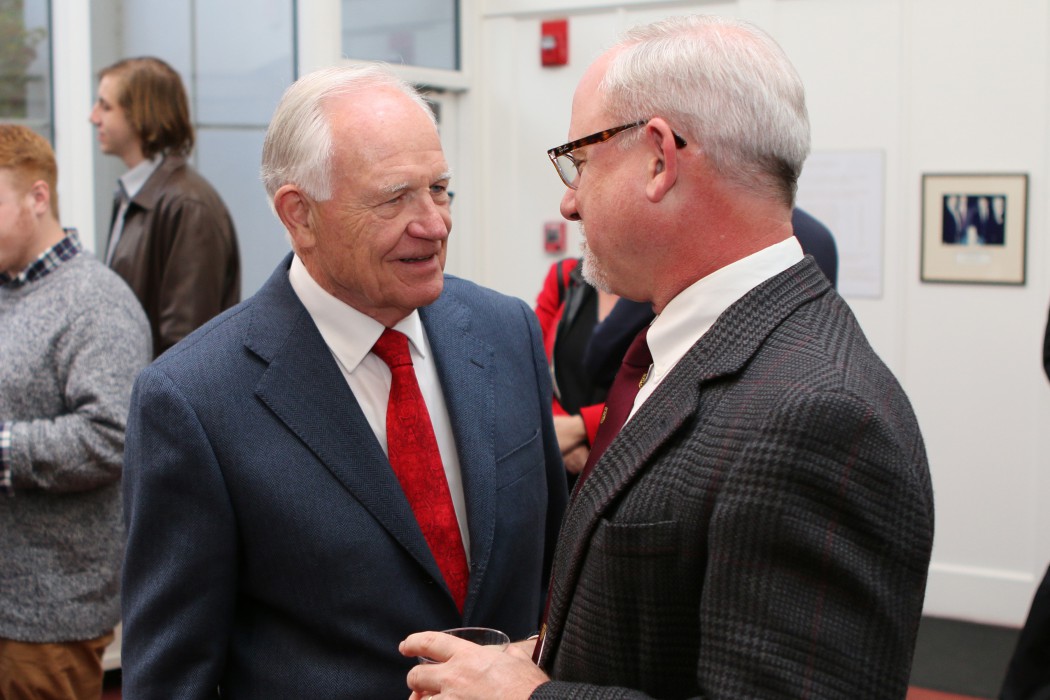 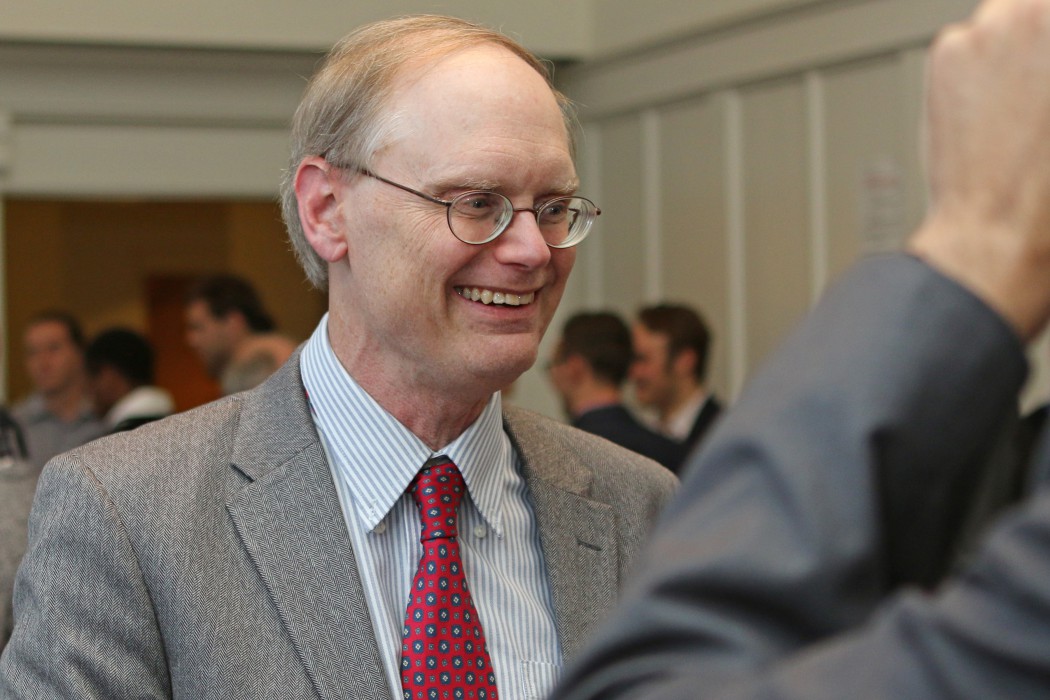 Last year's LaFollette Lecturer, Physics professor Dennis Krause, who had the honor of introducing Royalty's talk, relaxes at the reception. 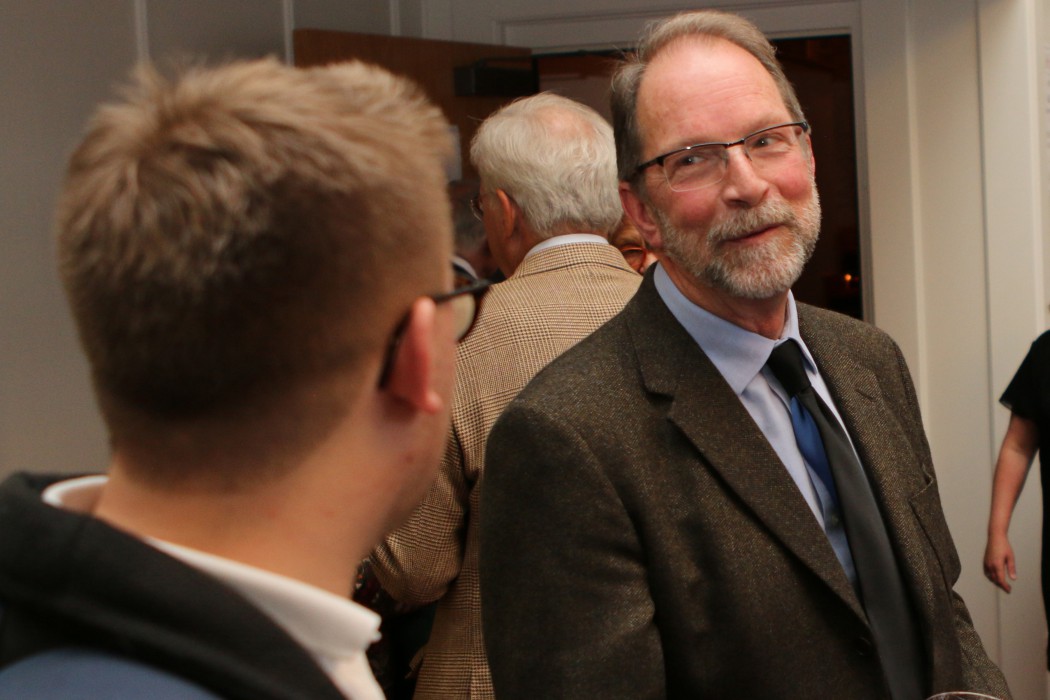 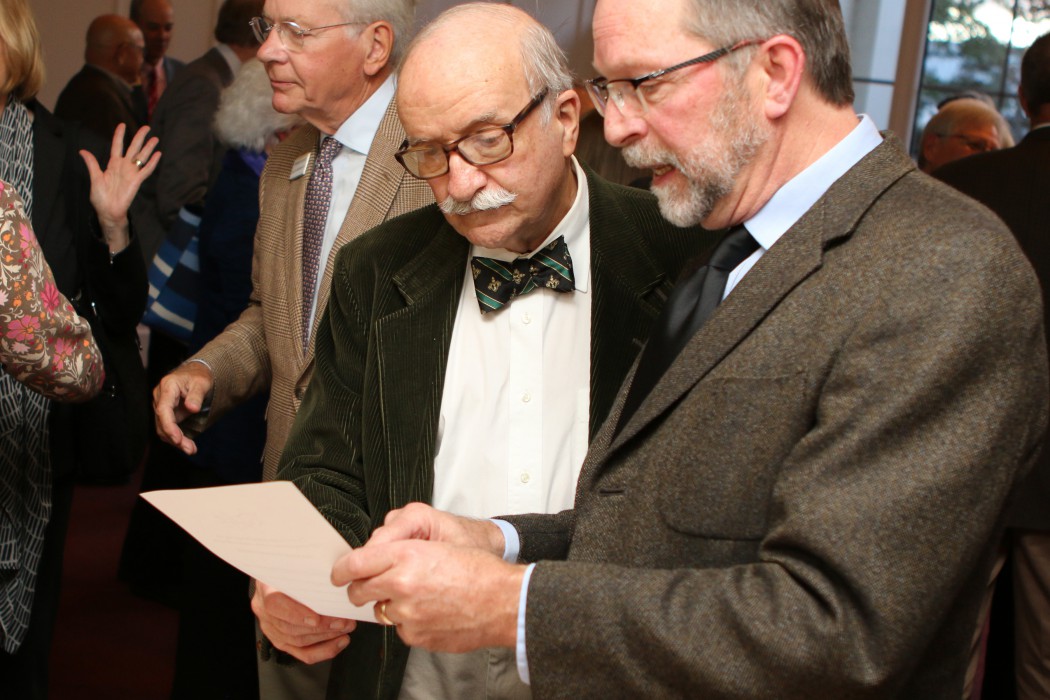 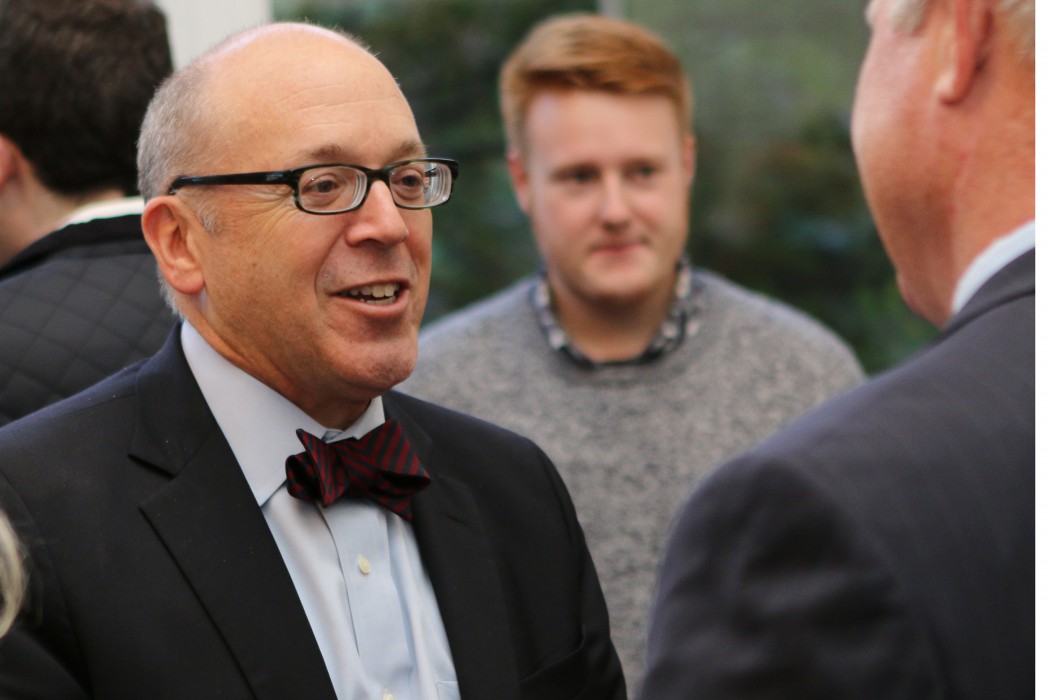 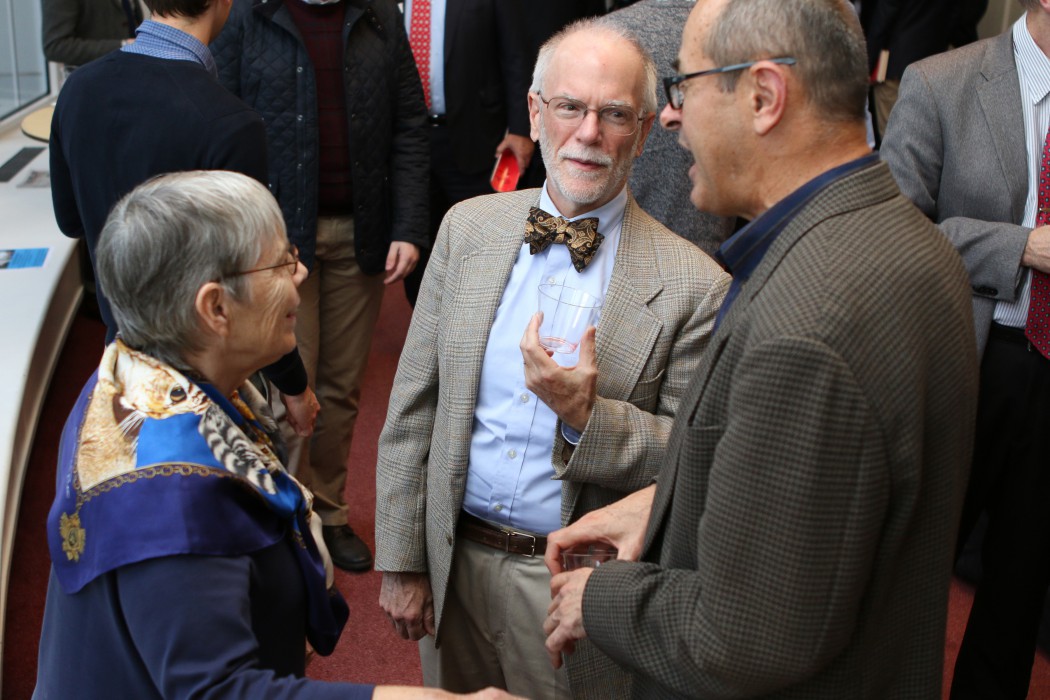 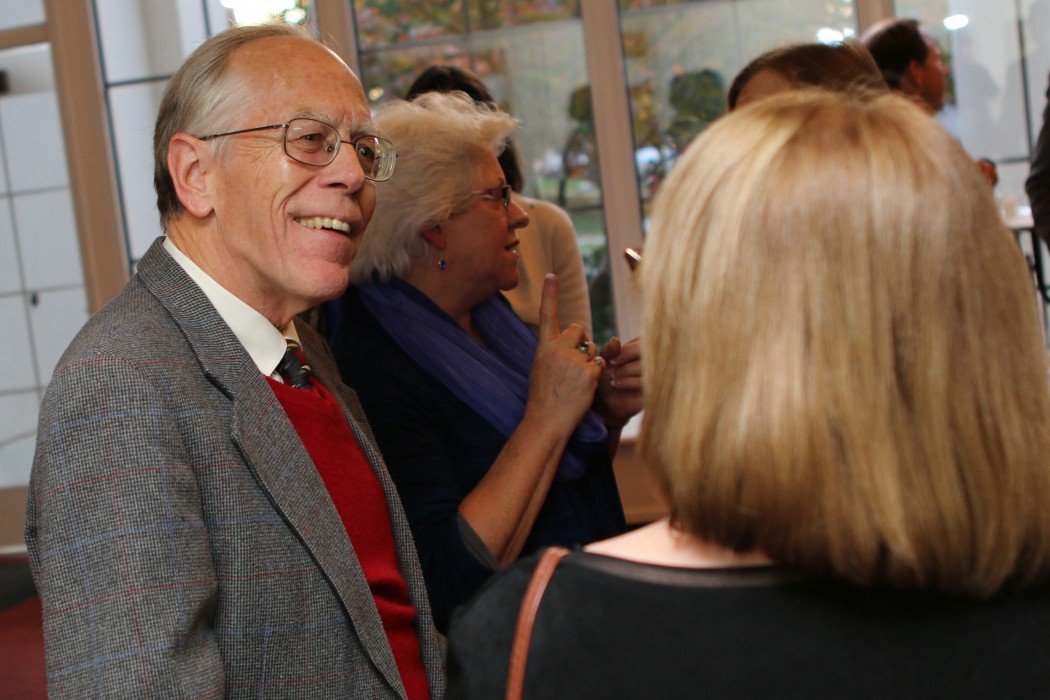 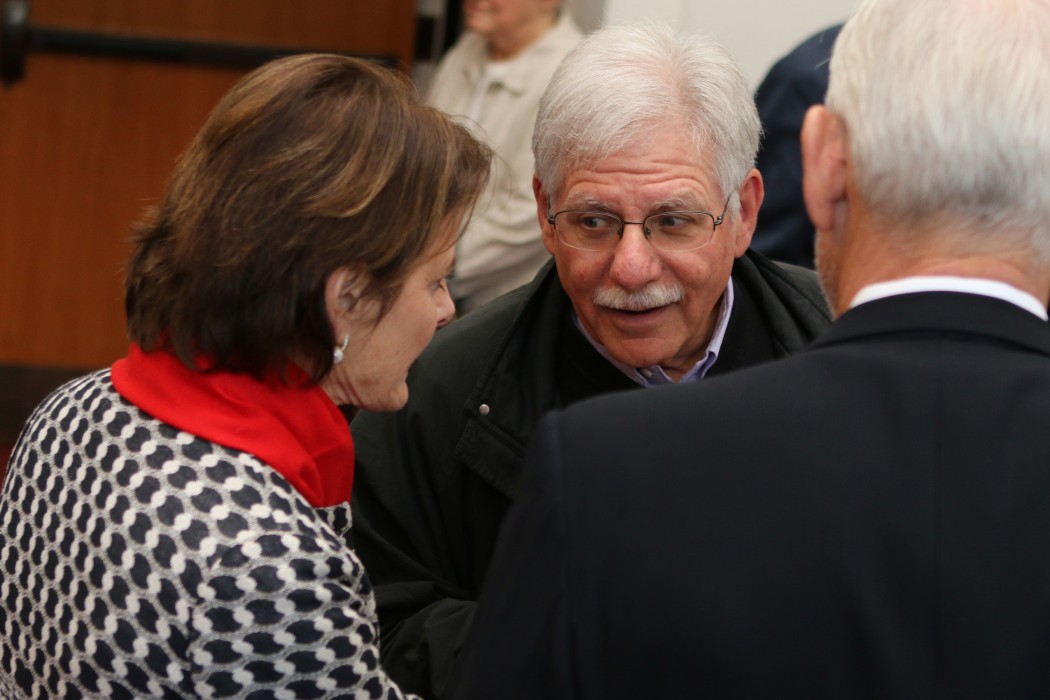 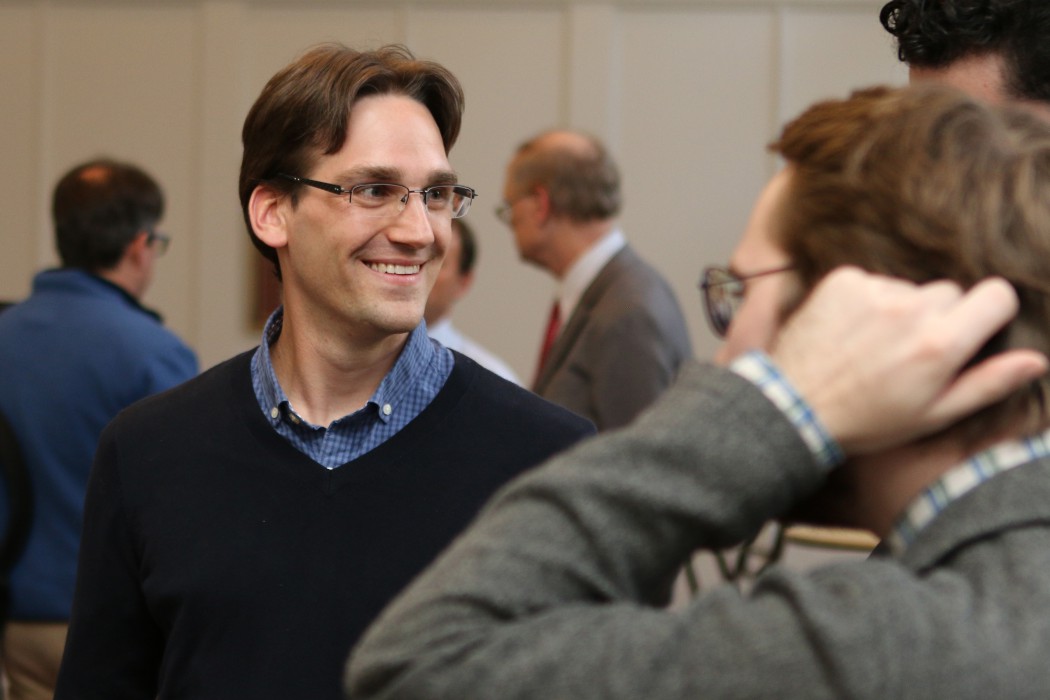 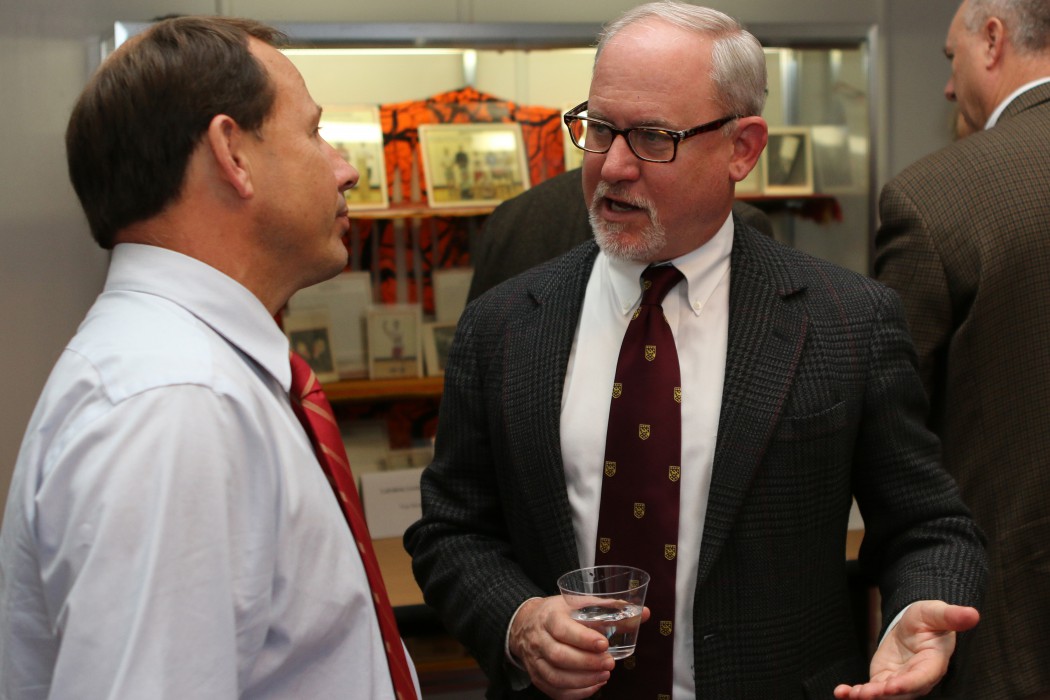 Dean of the College Scott Feller talks with Professor Royalty.

A Wall That Connects Us

Steve Charles—There was an ancient wall in the title of Bob Royalty’s LaFollette Lecture, but his talk was less about what keeps us apart than the moments in our lives “that tie us to each other as humans.”

On Friday his personal story created such a moment.

In “Walking Hadrian’s Wall: Meditations on Romans, Christians, Birds and Growing Older,” the religion professor wove details from the Roman emperor’s life into a chronicle of Royalty’s own 112-mile walk along the site of the ancient fortification built during Hadrian’s reign. He described an unexpected connection with Hadrian, who mourned the suicide of a loved one; Royalty’s father committed suicide 25 years to the day the professor began his walk along the wall.

Royalty also laced his talk with relevant information from his research on early Christianity, heresy, some current politics, and plenty of Roman history.

But what his audience will likely remember best were his details from that walk, his willingness to be vulnerable in the most academic of academic settings, and the bonds that endure between a son and his father.

That, and a lesson that Royalty took from the trip: In life, as in a walk along the Wall, we have to keep moving forward; moving forward can be harder for some of us than for others; there is no shame in being diagnosed with depression and “there should be no shame in suicide.”

Royalty described how Hadrian, after leaving Britain in 122 AD with the construction of the wall underway, Hadrian traveled across France to the eastern end of the Roman Empire.

“It was probably on this visit that he met his lover, a beautiful boy named Antinous,” Royalty said. “Hadrian was not crossing a wall by taking Antinous as a lover. Hadrian clearly preferred men; today we would call him gay or bisexual, but modern gender identities are foreign to the upper class [ancient] Roman and Greek social worlds.

“Taking a young man for so long did however cross a wall. Hadrian’s behavior provoked gossip and criticism in the Senate.”

“Antinous committed suicide by drowning himself in the Nile. There was some indication of religious ritual around his death, that he was offering himself to the spirit or genius of the Emperor Hadrian by taking on the ritual death of Osiris in the Nile. And perhaps he was. Others have speculated that he had to end the relationship when he turned 20. But from our vantage point it is hard to see this as anything but a young man’s suicide, what we would call today depression.”

The young man’s death plunged Hadrian into his own emotional turmoil.

“Hadrian could not move forward after Antinous’ death. We know about Antinous because of Hadrian’s public, powerful grief that obsessed him for the rest of his life. There are at least 100 marble images of Antinous discovered so far, more than any other ancient Roman besides Augustus and Hadrian himself; his cult continued long enough to be critiqued by Christians in the fourth century, for whom Antinous was seen as a rival savior to Christ.”

Twenty-five years to the week before Royalty leftfor England to start his trek along the Wall built during Hadrian’s reign, his father committed suicide in his car at the family’s Atlanta home.

“When I planned this trek, I wasn’t thinking about the 25th anniversary of my father’s death, or Antinous—that came later,” Royalty said. “And there’s nothing to connect my father and Antinous except a walk and a wall, an activity and an artifact. But religion makes connections and provides meaning; it tries to make sense where things seem senseless. I thought a lot about the walk before I went. But in ways that I hardly anticipated, walking the wall became a meaning-making activity for me.”

And a time of elation and reflection.

“There was such joy and so many moments of clarity during the trek,” Royalty said. “I was engulfed in the moment, in the experience, the rich palette of hiking, natural beauty, Roman history and archaeology, birds, and hearty British food. I felt as alive I ever have, exhilarated even when exhausted by the miles, thrilled by achieving a worthy goal.”

A dedicated birder, Royalty chose skylarks as the “bird of the walk.”

“They sing from the air along the moors and crags, in sun, rain, and mist. Skylarks sing in the rain, which captures well the mood of the walk for me.”

Royalty encountered his share of obstacles and had to push through an injury near the end of the walk, but those events inspired compassion.

“On a long walk such as the one I did last May along Hadrian’s Wall, life becomes simplified, focused, and clear. The only task I had besides walking to the next inn or bed and breakfast was to enjoy the day. For nine days, I carried everything I had. And I had to keep going. On mile 10 out of 20 for the day, the only way to go was forward. This wasn’t a day trip. I didn’t have a car. I couldn’t turn back to the inn I had checked out of that morning. I had to keep going.

“I thought about how we live this way every day—we have to keep going. It sounds trite, and perhaps it is. But think about how hard that can be. We all have lived in the past, dwelling on successes or failures or resentments, rather than moving ahead.

“And we have all known someone, maybe a student, someone in your family, maybe you, who couldn’t move forward. We say they are paralyzed—by grief, fear, indecision, depression. They can’t ‘get on with their lives.’ They can’t move.”

Royalty’s father committed suicide in May 1991, but the illness began well over a year earlier.

“After a first suicide attempt in April I flew to Atlanta to visit him in the hospital. He was calm and controlled at the hospital when I was there, but he had “acted out” the night before and been restrained. Perhaps he wanted a release from the pressures he faced in life, both real and imagined. By that point there was little difference between the two since his very, very sharp mind had become so clouded by the disease.

“His death was as bad as you might think it would be. Emotions were so conflicted: grief, horror, sadness, love. And anger. All of us were devastated, for days, for weeks, for years.

At the time, Royalty gleaned a warning from his grief.

“Everyone in the family and everyone who knew him wanted to know ‘why.’ Beyond a diagnosis of depression, that’s a very hard question to answer.”

But growing older has infused empathy into Royalty’s understanding of his father’s death.

“I am not sure we look back more as we grow older, but there is more to look back on. Regrets, resentments, joys, successes. We carry the past with us, just as I carried my pack forward every day along the Wall. Sometimes that feels very heavy indeed, sometimes lighter, but we carry who we are. The pack gets heavier as we get older, as dreams fade or become realities, as we lose loved ones.

“This burden, the things he carried, must have been very heavy for my father. And he could not keep going.

While Royalty stopped short of calling his walk along the Wall “a religious experience,” he pointed out that, “today, like a religion, the Wall brings new connections: connecting parks and trails across England, connecting families with nature, connecting this walker with his past.”

Yet even the most powerful of experiences are fleeting.

“On the night before the last day of the trek, I sat in a beautiful room at Hillside Farm on Bousted Hill, watching the sun set over Scotland. And then, the next day, it was over. For a week, two weeks, three weeks, I lived in this moment. Reliving the routes and photos and researching Hadrian and the Wall was work. But soon life intervened—obligations, deadlines, another trip, meetings, the daily grind. Experience faded to memory.”

What is left is the story, a yearning to tell it, and the way listening to the most singular of personal details may spark recognition and connect us.

“Last August, as 25 years became 25 years and three months, I realized while walking the dog by the creek that I would never have a conversation with my father,” Royalty concluded. “That seems obvious, of course; indeed, that acute realization is one of the most painful parts of grief when a loved one dies.

“But memories fade: 1 year becomes 5, 10, and now 25. Since my walk in England I’ve spent more time in sustained reflection about my father, who he was, what did and didn’t happen in our 30 years together. At Christmas a year ago I started a sort of conversation; nine months later I realized that the conversation was one-way.

“Experience fades and becomes memory. Memory becomes narrative. If the study of religion and the humanities does not bring us close to what is truly human, what ties us to each other as humans, then it is study in vain.”