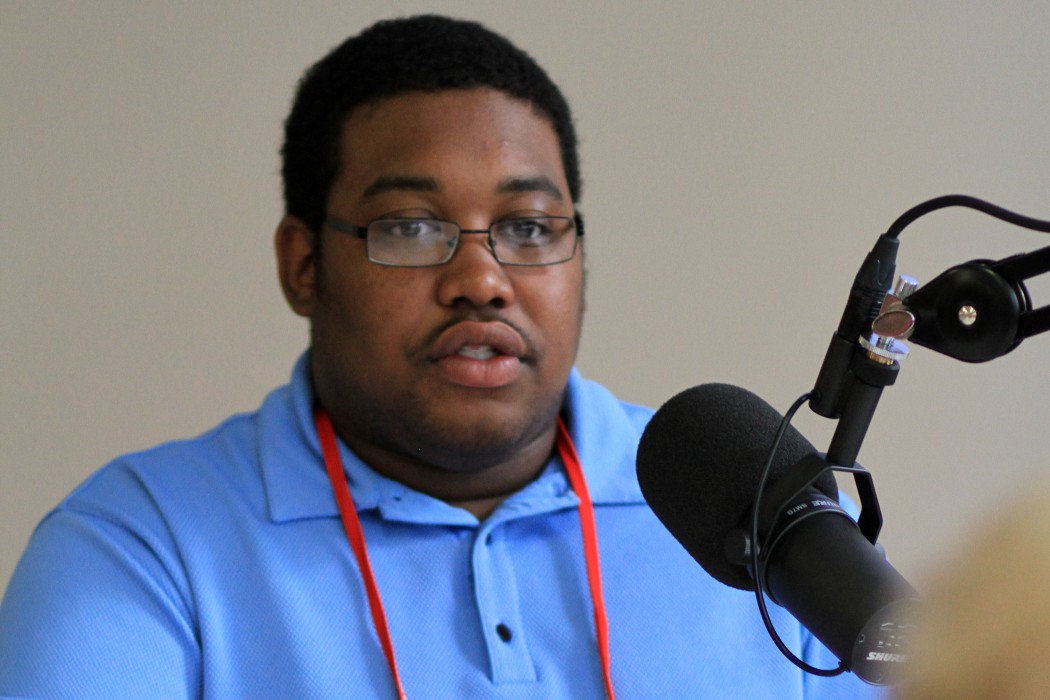 Kevin Griffen ’18 listens to an alumnus' story during an interview for the Scarlet Yarns audio project at this year's Big Bash Reunion Weekend. 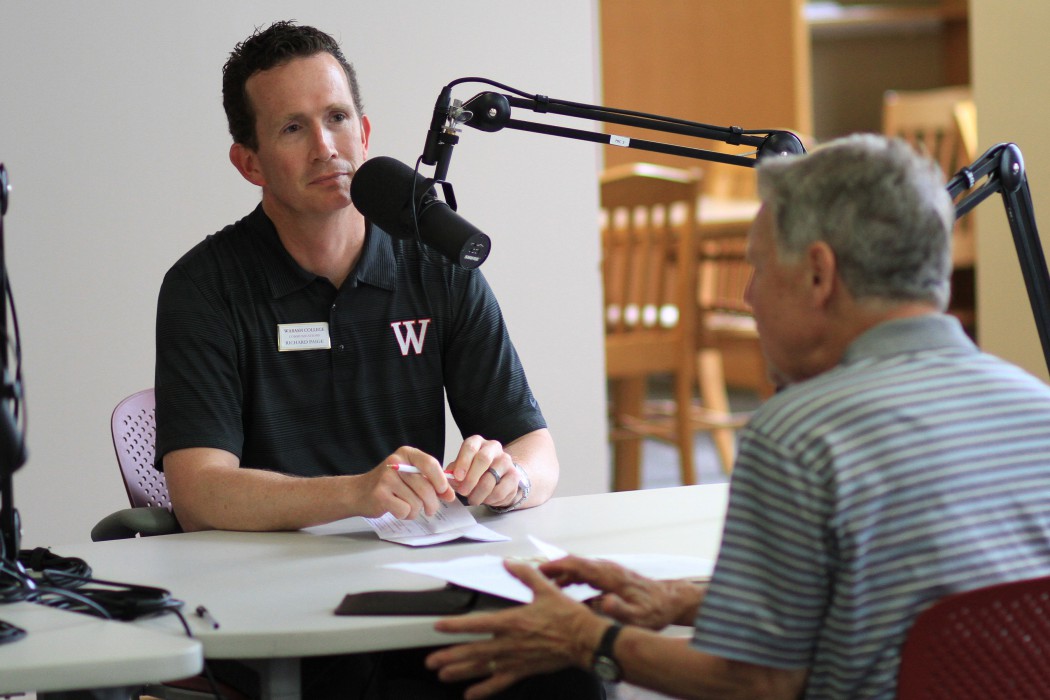 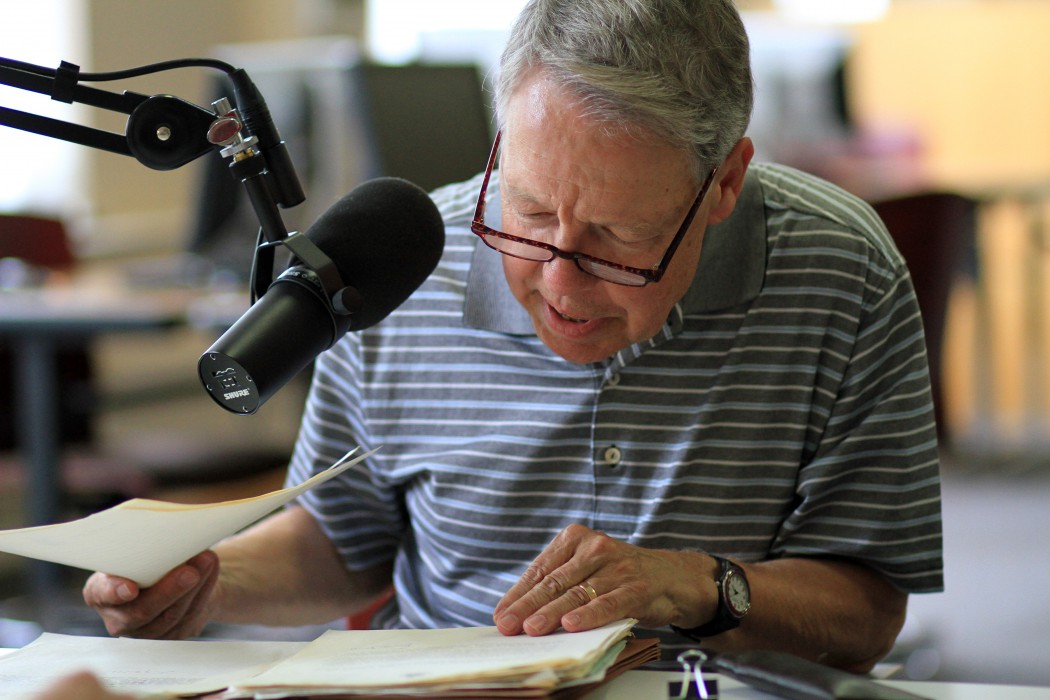 David Kendall ’66 reads from letters he kept from the year he spent trying to desegregate his fraternity. 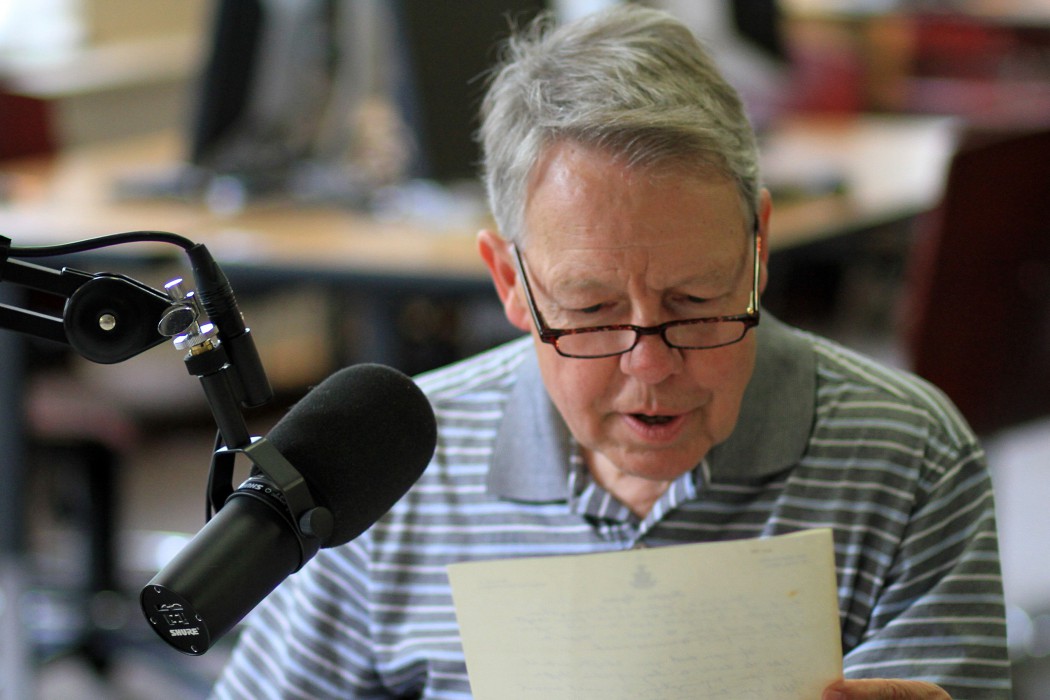 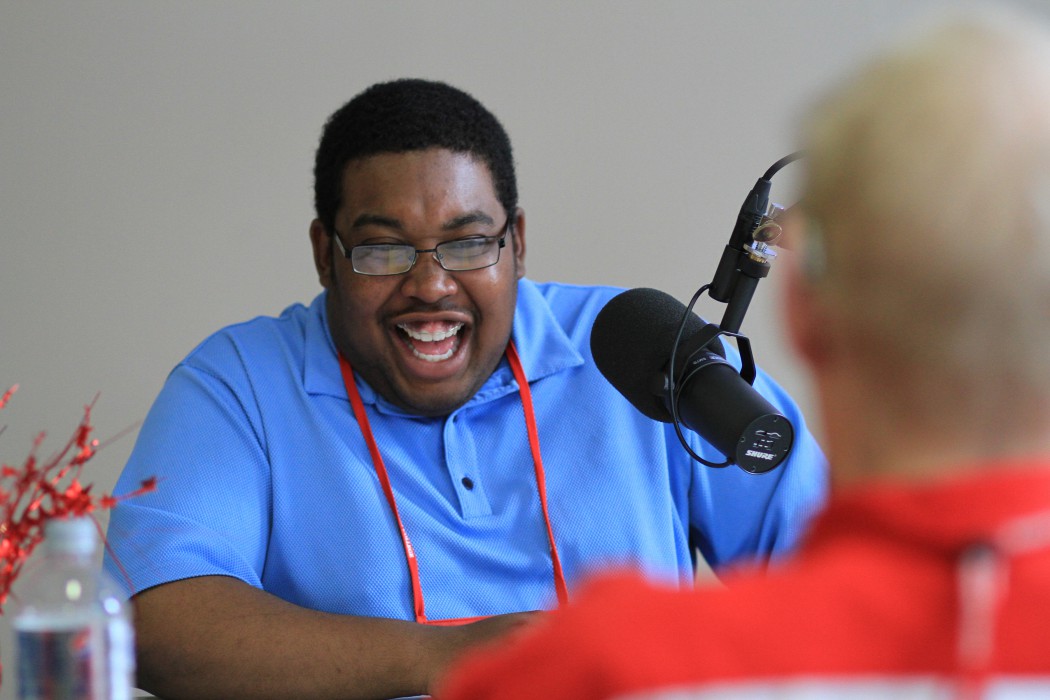 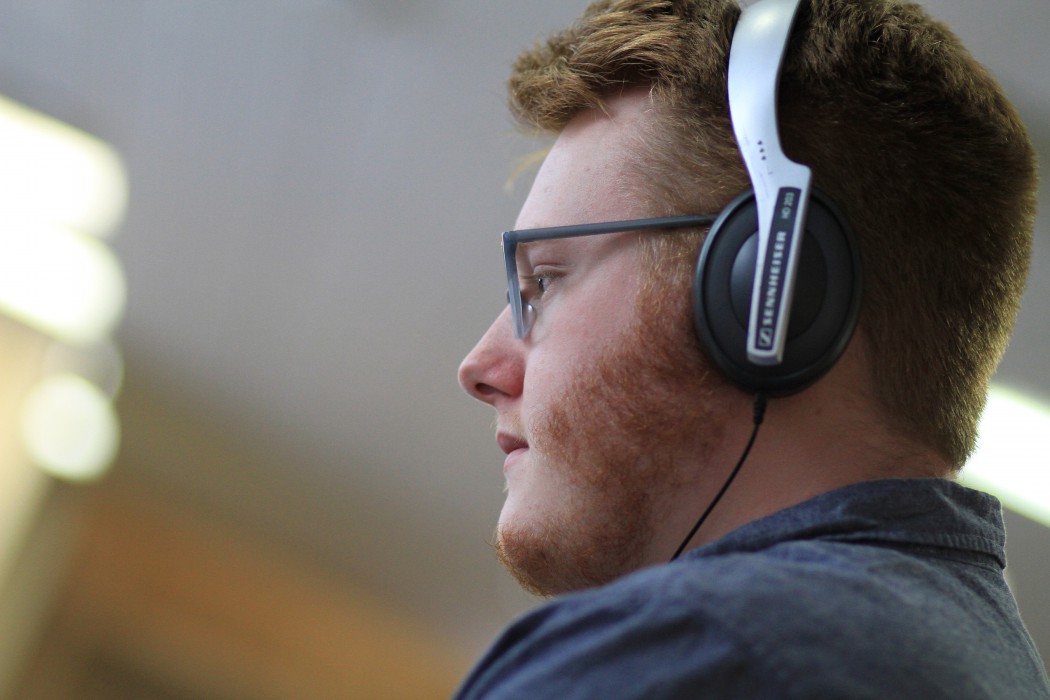 Ben Cramer makes sure the audio levels are good and the stories are being recorded. 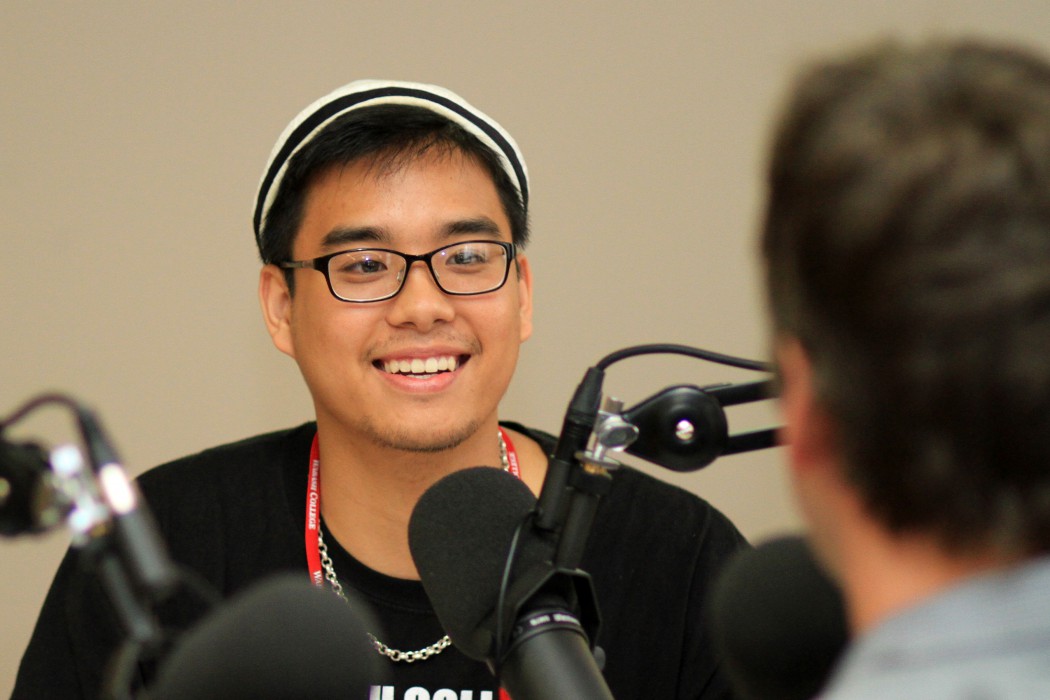 Tu Nguyen ’17 was audio engineer for many of the recordings, but he stepped behind the mic for this one.

“Light That Cannot Be Hidden”

Steve Charles—When Kevin Griffen ’18 first joined the Communications & Marketing team as an intern in May, I wouldn’t have guessed his work would re-shape the Summer issue of Wabash Magazine, “A Light That Cannot Be Hidden.”

But Kevin’s genuine respect for alumni and ability to put them at ease during interviews for the Scarlet Yarns audio project at this year’s Big Bash in June drew out a previously unheard series of anecdotes. That narrative offers a glimpse of student efforts to desegregate fraternities in the 1960s, the legacy of that work in the 1980s, and what life in those turbulent times was like on campus.

Paired with Associate Director of Communications Richard Paige’s conversation with David Kendall ’66 that weekend about his attempt to desegregate the Kappa Sig house in 1965, they comprise a storyline so compelling we dedicated eight pages to it. And much of the rest of the issue is infused with the spirit and vision of those early student efforts, along with Father Vince Druding’s inspiring Baccalaureate Sermon from this year’s Commencement.

When we first asked Kevin—a political science major and associate chair of the Malcolm X Institute of Black Studies (MXIBS)—to lead the  interviews, he was most eager to talk with grads from the classes of 1966 and 1971.

“I wanted to get a good understanding of what it was like to be here in the 1960s and 1970s, particularly during the Civil Rights Movement and the found of the MXI,” Kevin said. “But I wasn’t expecting so many connections. That surprised me.”

The most startling moment for those of us recording and photographing the interviews came when David Kendall ’66 read aloud a letter he had received in 1965 from a Kappa Sig chapter in Texas objecting to his desegregation efforts.

“When you are running a purebred herd, you don’t want to mess things up by having a neighbor’s stray come over and service your cows,” the writer of the letter states. “Likewise, I do not feel like we should let strays into our fraternity… I could never call a Negro a brother.”

For the older folks in the interview room, it was a sickening reminder of the blatant racism of that era. For the students recording the project, it was eye-opening. For Kevin, it confirmed attitudes he’d heard about from his grandmother about going to high school in Indianapolis during the 1960s.

“It shocked me that someone would call anyone that’s not like them an animal—to refer to them as not human. It was repulsive, and awful to hear,” Kevin says. “A week later I listened to it again on the recording, and it saddened me, made me a little confused. I didn’t live in that time—it confirmed what I had been reading about racism and white power ideologies.

“I hear from my grandmother sometimes that her experience growing up wasn’t the best, and that letter and some of the things I heard during those interviews reflected that.”

Kevin was impressed by Kendall: “It was shocking to me—that everybody knew these policies, but there weren’t a lot of people pushing for change. To see David Kendall really invested in civil rights… his passion to fight for his black brothers to be admitted [into the fraternity] speaks volumes about the character of a Wabash man.”

He enjoyed hearing 1971 grad Garrett Paul’s perspective on events surrounding the early days of the MXI.

“It was so unexpected—I didn’t think I’d hear about the formation of the MXI. But Garrett Paul comes in, this cheerful guy, talking about his experiences being on campus after the Civil Rights Movement, during the Black Power Movement. He talked about meeting the Black Panthers when they came to campus. Experiences he’ll never forget. He talked about the underground newspapers of the time—I had to ask what those were!

“You see all these documentaries on TV, but it’s nothing like hearing it from a person who actually lived in that time.”

He admits it took him a couple interviews to relax, but Kevin says once he got comfortable he thoroughly enjoyed the conversations.

“One of my heroes is [the late Indianapolis radio journalist] Amos Brown,” Kevin says. “He was so energetic—he’d get to the tough questions, but he made issues approachable.”

Kevin had been interviewed by Brown in 2013 when the then-high school junior was helping to establish at Crispus Attucks Medical Magnet School the state’s first high school chapter of the NAACP.

“So these alumni, I wanted to be energetic, personable, making sure they felt comfortable,” Kevin says. “At the same time, I wanted get to the heart of what it meant to be a Wabash man during their time here.”

Kevin succeeded, and in the process, captured some personal histories of Wabash men that make this “A Light That Cannot Be Hidden” the best Summer issue of WM we’ve ever published.