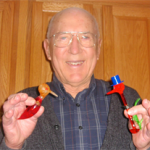 Sullivan is perhaps best known for the drinking bird that sits on the edge of a glass, perpetually bobbing in water without any internal or external energy source. United States President Herbert Hoover had one on his desk in the Oval Office. Albert Einstein stayed up all night at one point, puzzled about how it worked. When asked in the morning whether he had figured it out, he shook his head, but then proceeded to disassemble the bird for his answer.

Patience came easily to my father, and he never seemed to tire of his three children’s unscientific minds.

“But how does this work, Dad?” was our perpetual theme. His answers were thematic too.

The sensor filament inside the toaster says to the release mechanism: “Our toast looks just crusty enough to eject now.”

The battery’s positive charge says to the negative: “Potentially, we could make a complete circuit.”

It could be laser beams, computer chips, the little bobbing bird that made my father internationally famous, or just the dial on a washing machine—in the end, they all assumed human personalities.

Hardship can inspire humor and creativity—my father was proof of that. After his father died, a small one-room Winona storefront doubled as living quarters for my father, his brother, and their mother. A small curtain near the back of the store did its best to partition off the boys’ bed from the rest of the cramped store.

By the end of high school, it was apparent that his mind was capable of great things, but a lack of money stubbornly blocked my father’s college aspirations. Months after graduation, an accidental meeting with a former math teacher settled the issue.

“You need to be—you must be—in college, Miles. I will get you there,” the teacher said, single-handedly arranging a full scholarship to Wabash covering tuition, room and board, and even a steady job.

With the ink on his undergraduate diploma barely dry, my father was drafted into World War II service—his main residence, the Naval Research Laboratory in Washington, D.C.

After the war, Bell Labs in Murray Hill, NJ, quickly hired my father as a member of their semiconductor technology team. He soon acquired a series of patents, including photo-mask lithography systems used in computer chip circuitry. He also developed new contacts that allowed energy to flow away from solar panels and into energy-consuming machines. These contacts are still widely used in communications systems as well as in experimental projects like the Mars rovers.

Facts tumbled out of my father’s brain like salt from a loosely capped shaker. He must have been born with an extra curiosity gene, because his fascination with life permeated everything he touched.

Pursued by lawyers and marketers attempting to partner with him in business, my father stubbornly refused to stray too far from his love of pure science.

But he also liked having fun. In 1946 he patented the little toy bird that seems to bob endlessly for water without an apparent energy source. He called the little toy “the drinking bird,” and probably didn’t dream that it would eventually be considered for advancing water irrigation systems in the Middle East, using the sun as its only energy source.

Albert Einstein’s encounter with the bird was reported in a 1964 TIME magazine story. After several days of theorizing about what propelled the little bird, the great physicist’s attempts at unraveling the bird’s secret proved futile.

In 1949 a Washington Post reporter said that the drinking bird was the top entertainment feature in the House and Senate. Miles Sullivan hadn’t yet set foot on Capitol Hill, but the little bird’s feet had.

With the inside scoop on the bird’s mechanics ingrained in our brains, my brother, sister, and I used to explain to our science teachers the details Einstein had missed. It was our brief moment of glory in the science spotlight, except for our run- ins with some of the lab-coated, bifocaled physicists at the laboratories. These colorful characters always struck us as an equal mix of kind, scary, and quirky.

It was easy to see why my father fit in so well at the labs. It was a place where the building’s passkey appeared to be this: “Above all else, let’s never be routine—if it’s new and different, let’s develop it, and let’s revel in it.”

—from “The Father of Inventions” by Anne Sullivan