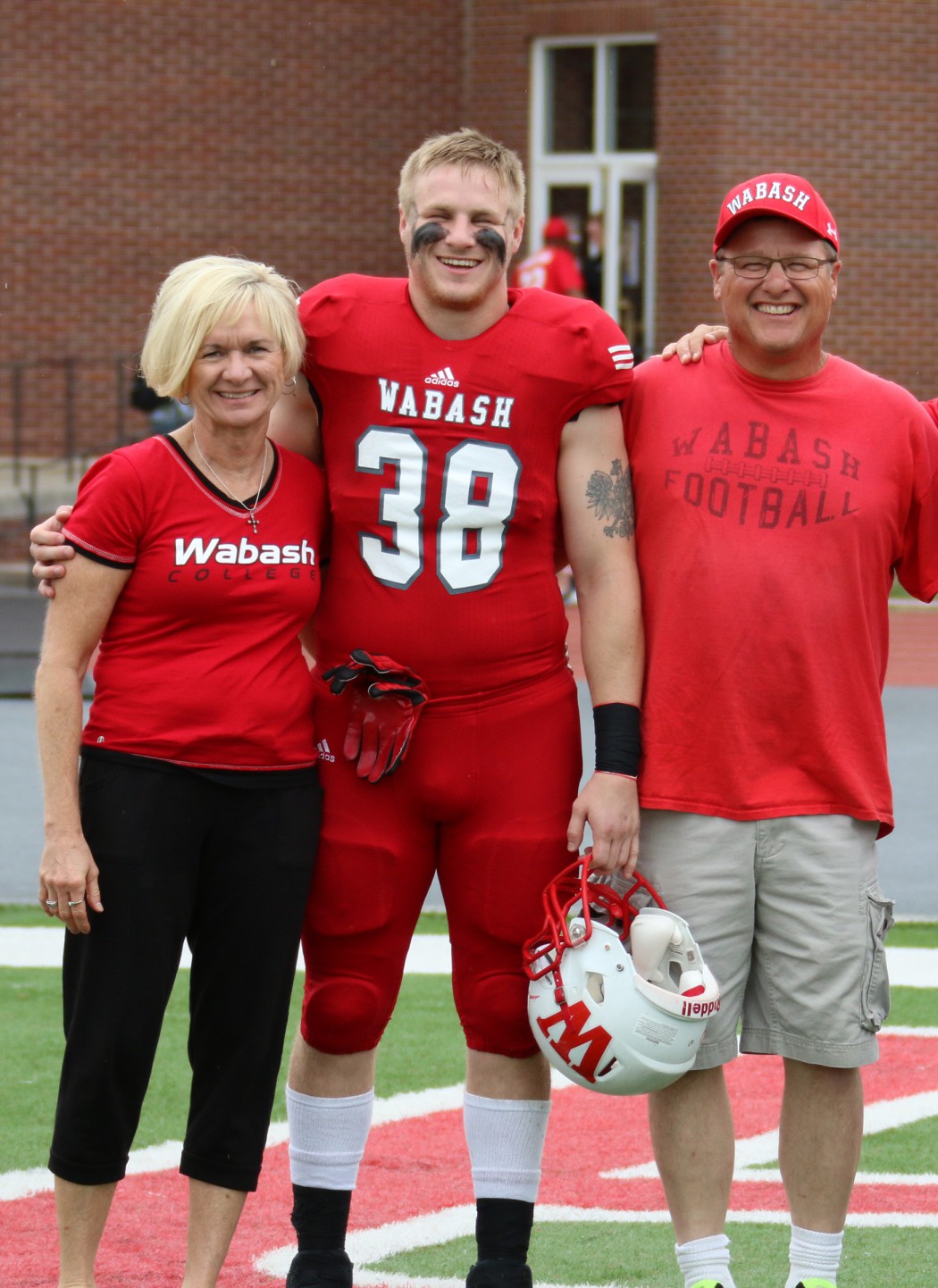 Zurek (center) in a Senior Day photo with his parents Stacey and Robert. 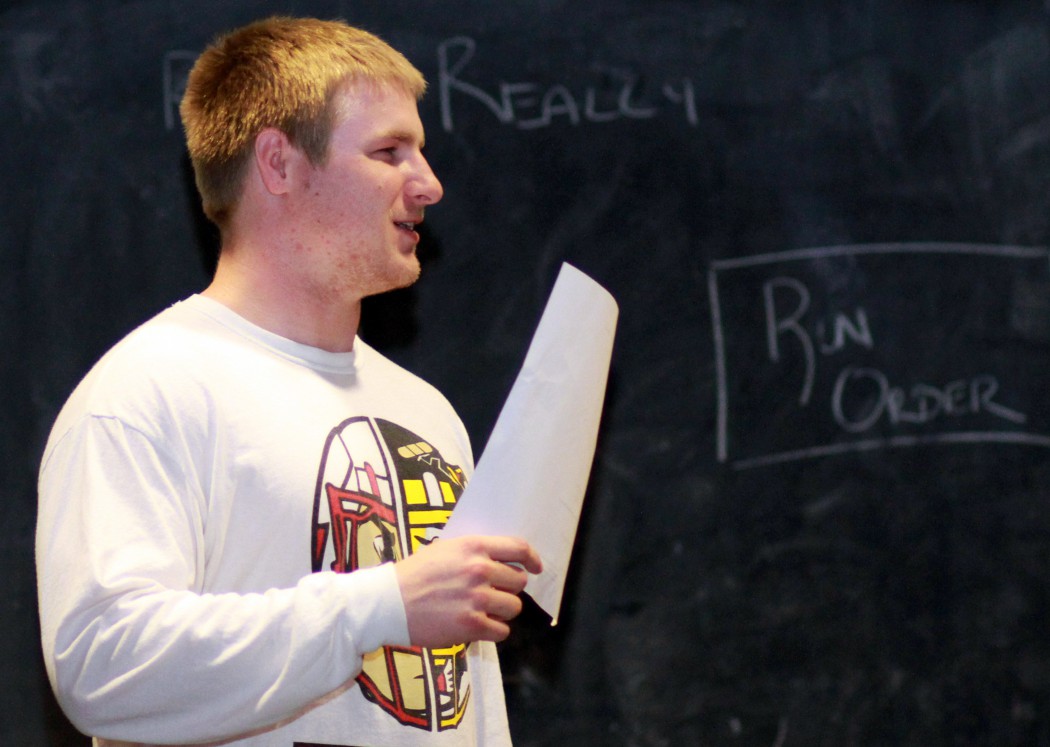 Mason Zurek in his Intro to Acting class. 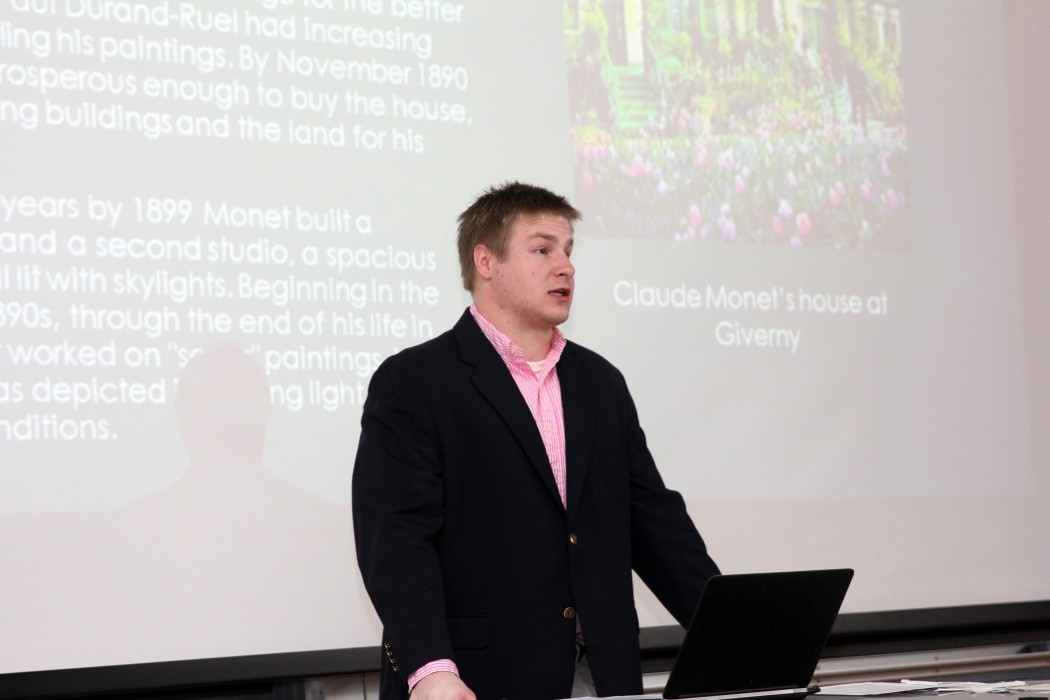 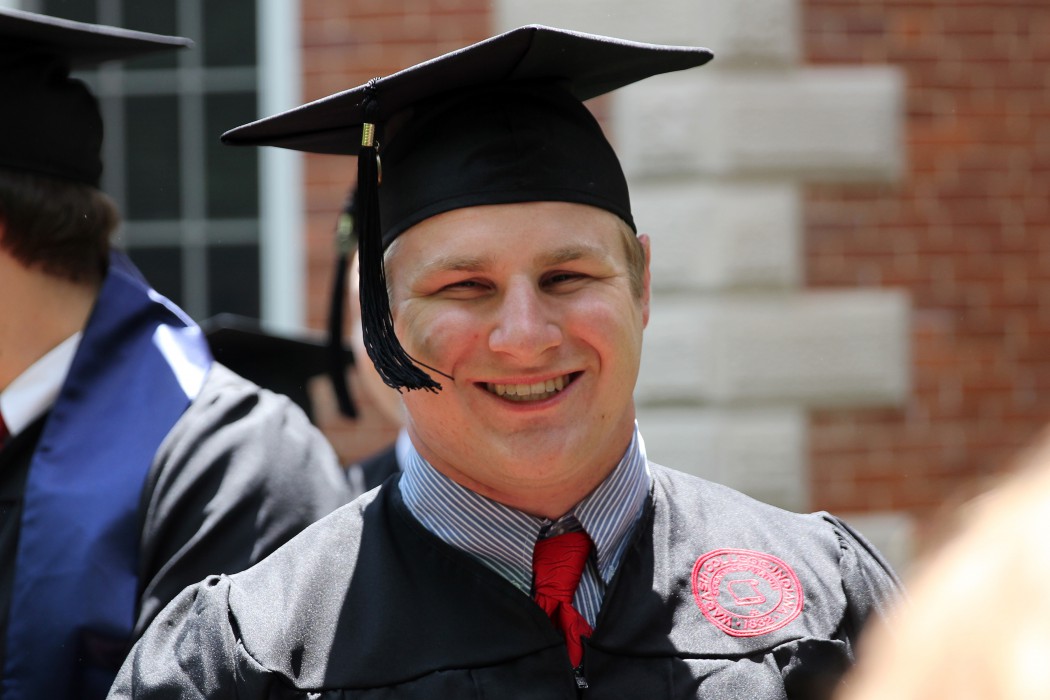 Mason Zurek '16 mugs for the camera prior to the 178th Wabash College Commencement Exercises, Sunday, May 15, 2016. 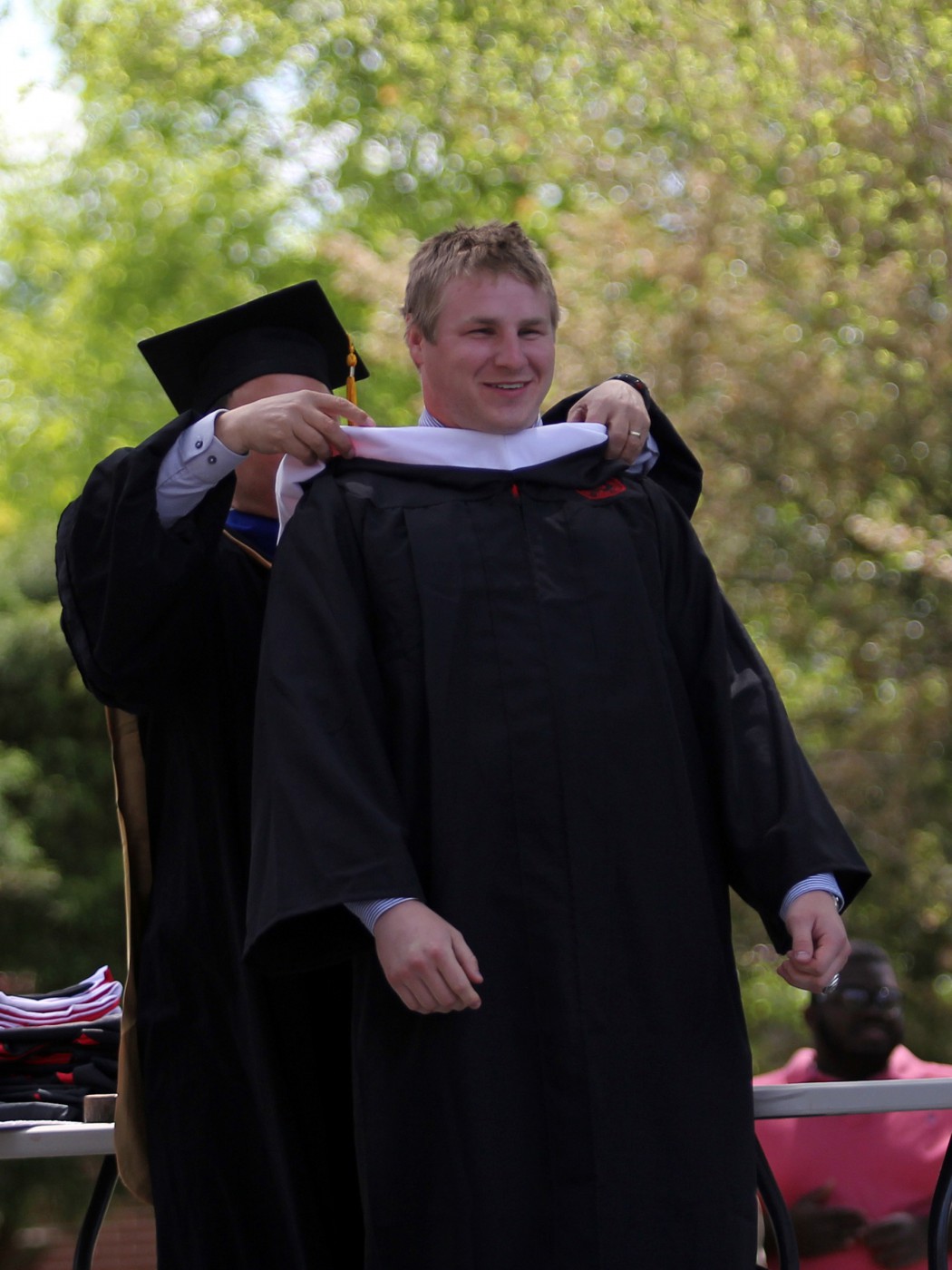 Mason Zurek '16 receives his academic hood from Dean of the College Scott E. Feller during Commencement. 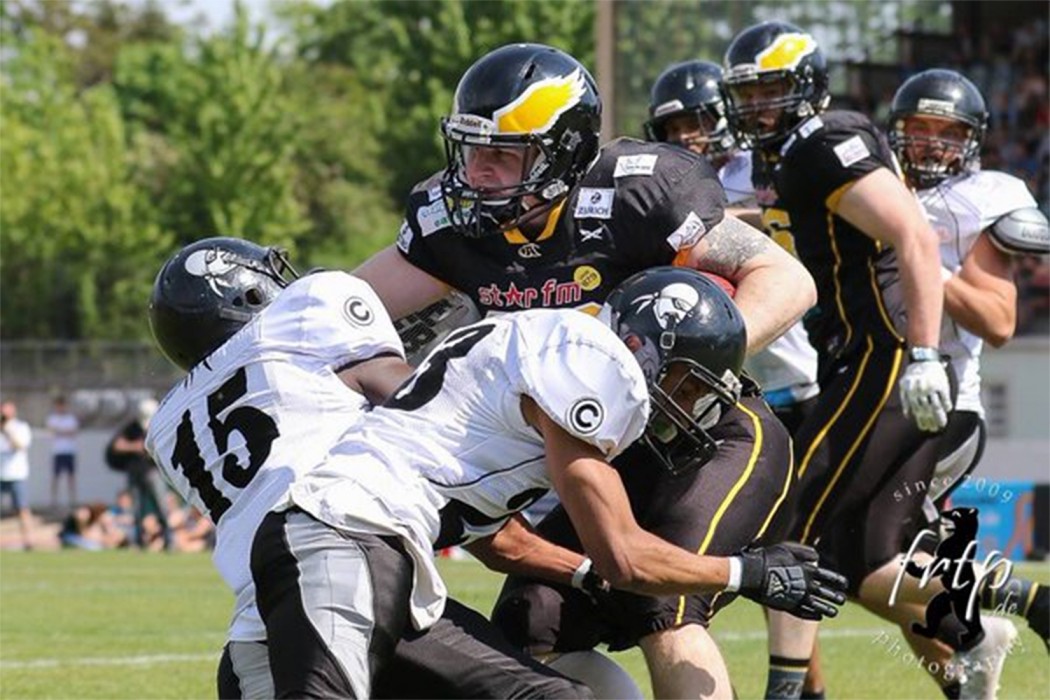 Mason Zurek '16 (center, with ball) in action during his first professional football game, May 22, 2016, in Berlin, Germany, for Berlin Adler in the German Football League. 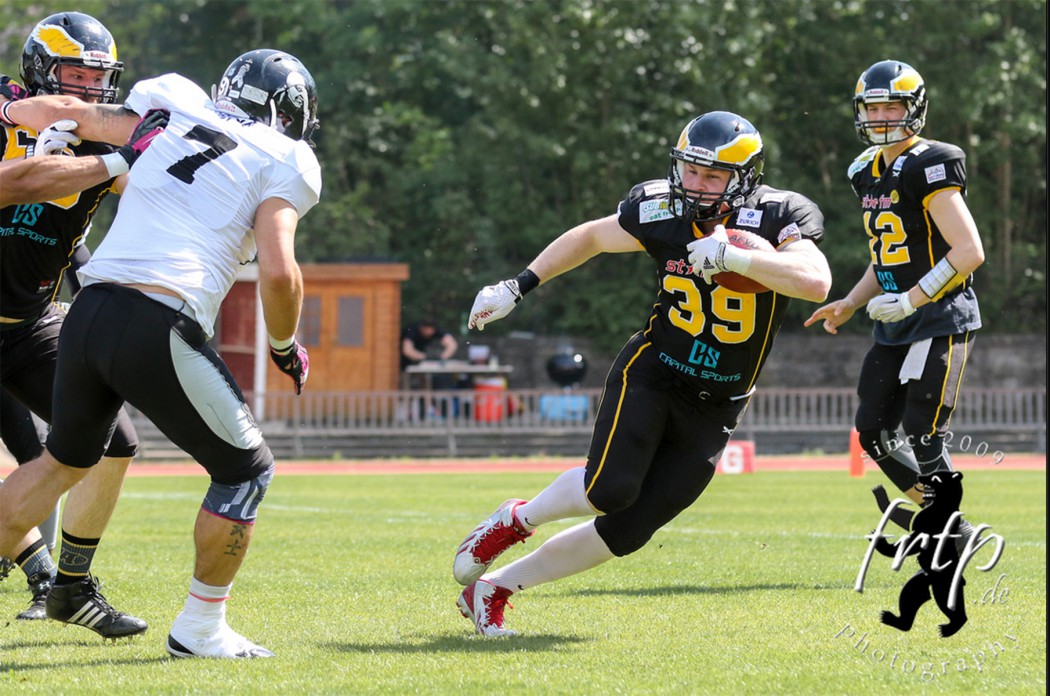 Mason Zurek '16 carrying the ball for Berlin Adler in the German Football League, pictured here against the Berlin Rebels.

Richard Paige — Whether it’s a violation of the Gentleman’s Rule is debatable. Beyond any reasonable doubt, however, it was an awesome prank.

“I did. I stole his robe,” says co-conspirator Connor Karns ’16 proudly.

Discover what was stolen – a Harry Potter Quidditch robe – and from whom – All-American football player Mason Zurek – and you’ll learn a little about brotherhood on this campus, and the quality guy that Zurek is. 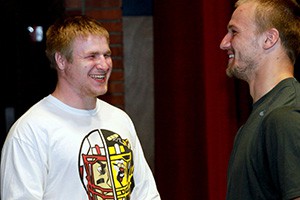 Mason Zurek (left) shares a laugh with Connor Karns in an Intro to Acting class.

Click here for a video feature on Mason Zurek ’16

Zurek likes to wear a bathrobe around the Sigma Chi house when he feels like lounging. He’s not shy about it. Most times, he doesn’t even tie it up. It’s become so much a part of who he is, that Zurek sometimes strolls campus in it, too.

Zurek has always had a robe while on campus. His first one was blue – “some kinda suede,” Trepton says – but his mom got him a new one, upgrading to the Potter model, last Christmas. Zurek loves Harry Potter. He re-reads the books in the series every summer and even dropped $300 on souvenirs at Harry Potter World last year. Add that to the fact that his mom gave it to him and it went from robe to a treasured possession.

One random Saturday night in the doldrums prior to Spring Break, the robe ended up in Karns’ possession and a plan was hatched to keep it for a few days to see what happened.

Zurek lost his cool. The football star who rushed for more than 2,000 yards last season, the rhetoric major who has presented at professional conferences, the future law school student completely melted down. Panicked e-mails, frantic house searches, guilt trips, pleas at chapter meetings. Nothing Zurek did or said brought that robe back. Days passed and he was getting more desperate. He even threatened to cancel his Spring Break trip. Zurek needed a Time-Turner!

“I spent three or four days angrily searching everyone’s rooms – every nook and cranny I could – and I still couldn’t find it,” Zurek says. “I could not control myself. The e-mails got increasingly angry as the week went on and the searches got more desperate.”

Karns is succinct: “It got ridiculous.”

The following Friday at lunch Karns slipped into the room next to the Sigma Chi cafeteria and blasted the Harry Potter theme over the speakers, put on the robe, flipped up the hood, and prepared 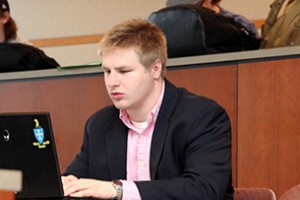 Zurek prepares for an in-class presentation.

to enter the lunchtime din.

“Everyone goes silent, and I’m wondering what’s going on,” Zurek says. “The sliding doors open and Connor is standing there wearing my robe. I freak out, tackle him and take it back.”

“He was full of joy,” Karns says, “not even upset, just so happy that he had his robe back.”

Zurek is likable. He’s hard working. He’s tough. He’s also lighthearted and approachable. Someone easy to joke around with. Someone his pledge brothers know all too well.

“There are 16 of us who know everything about each other – hometowns, full names, families, everything – we’re so close,” Karns says. “When he found out it was us, he understood the joke. We’re brothers, and it was only a little joking between brothers.

“Fortunately, he’s never pulled off anything that extreme on us.”

Richard Paige
Back to Top