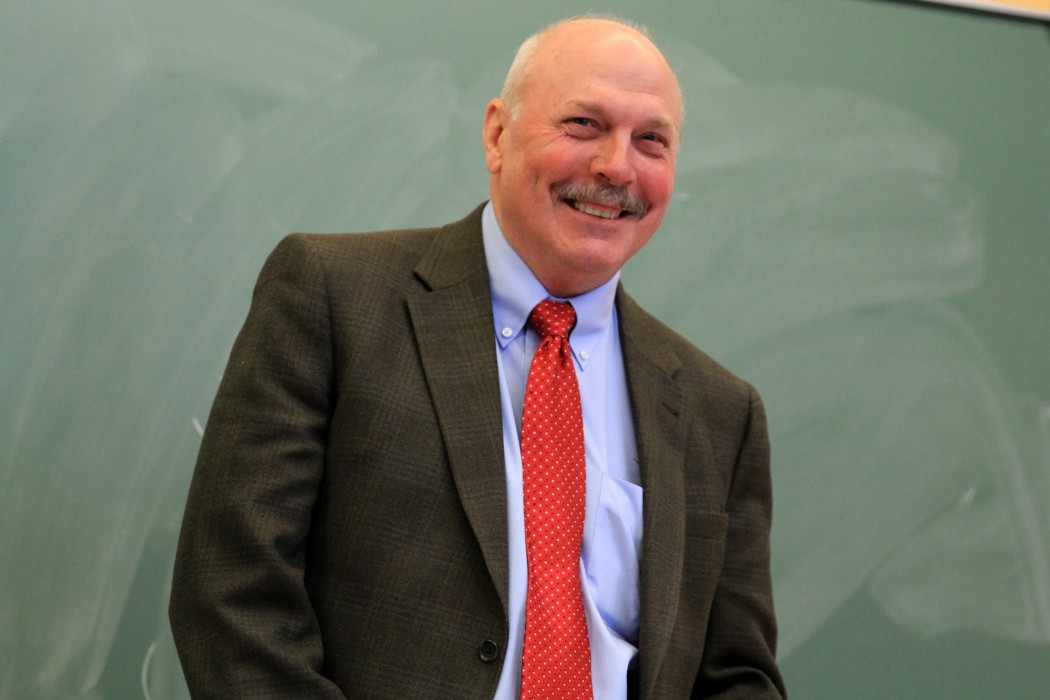 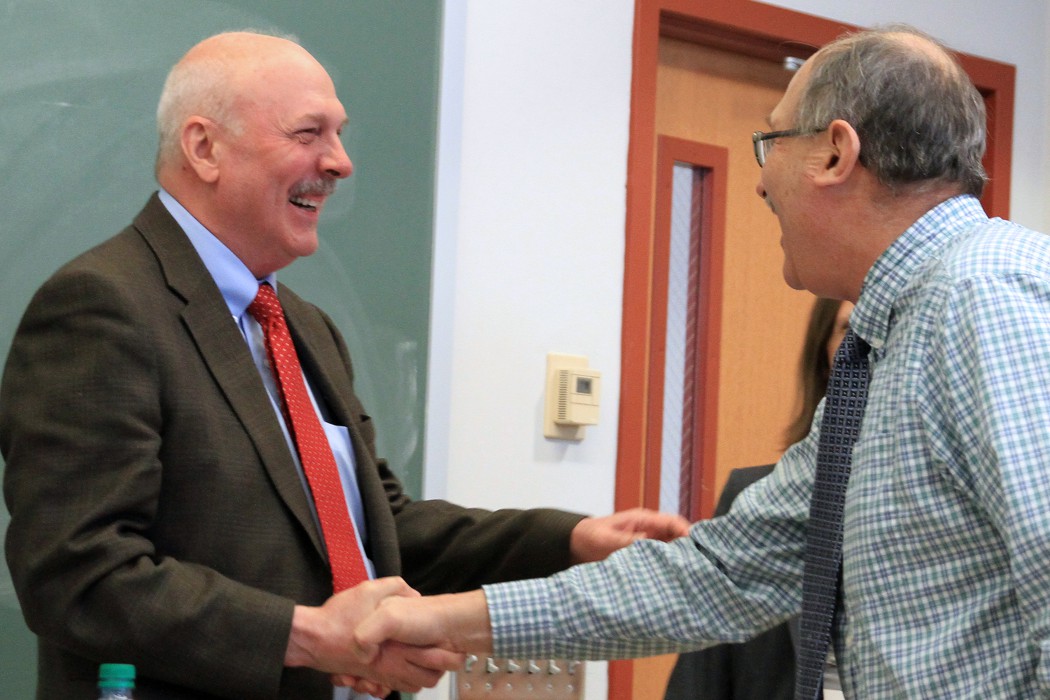 Dean enjoys a reunion with classmate Joe Haklin ’73, Director of Athletics at Wabash. 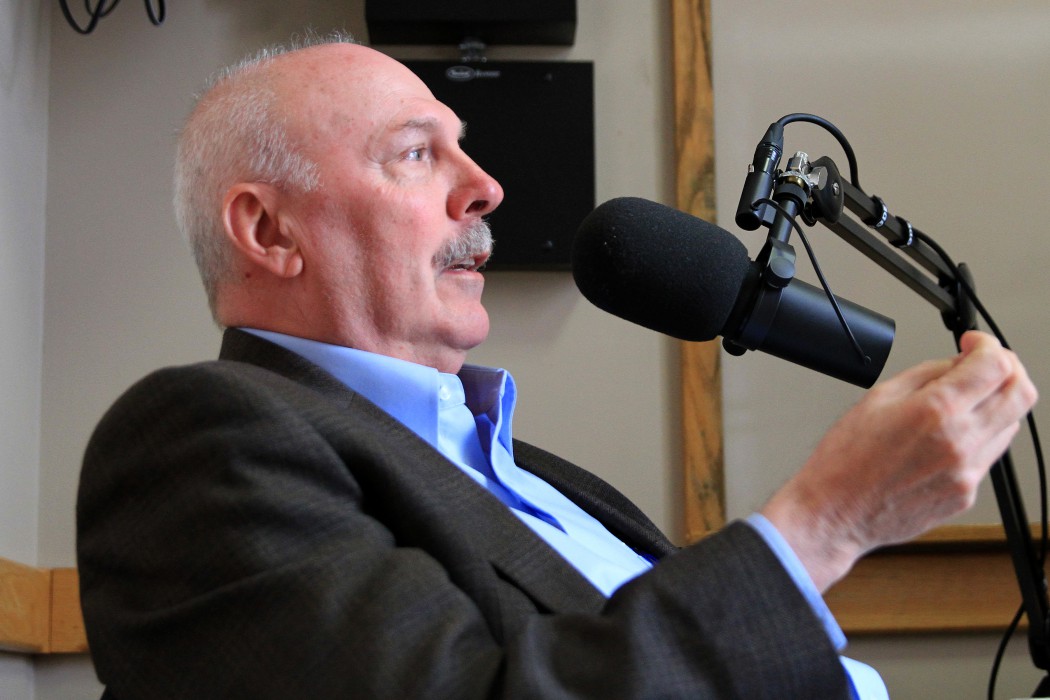 Dean took time out of his busy schedule at Wabash to talk with Associate Director of Communications Richard Paige for a Wabash On My Mind podcast. 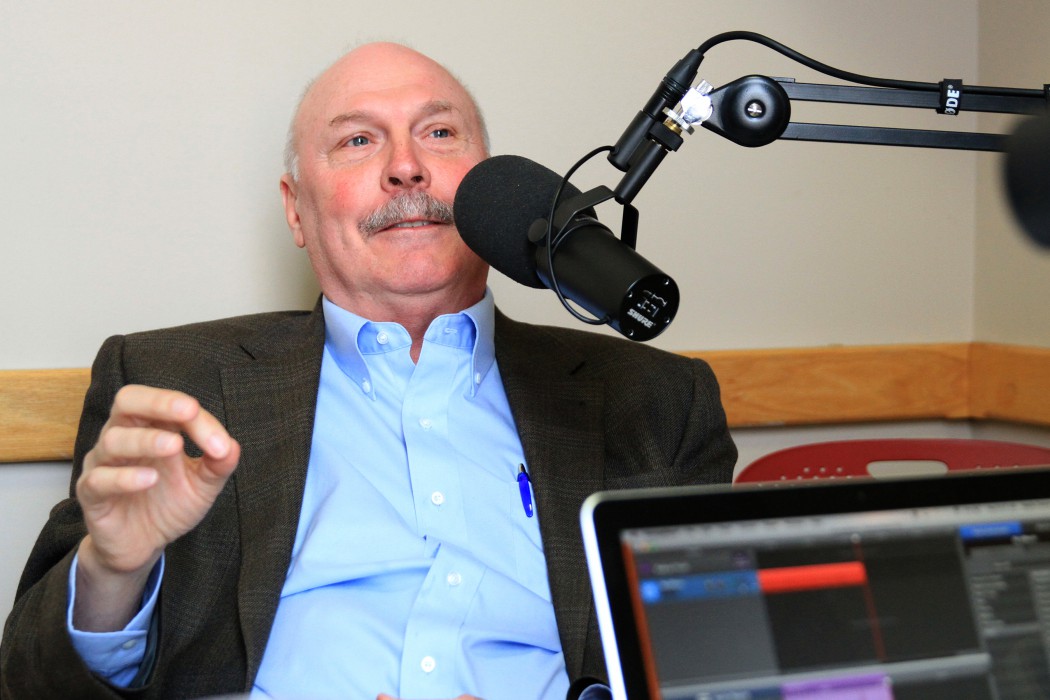 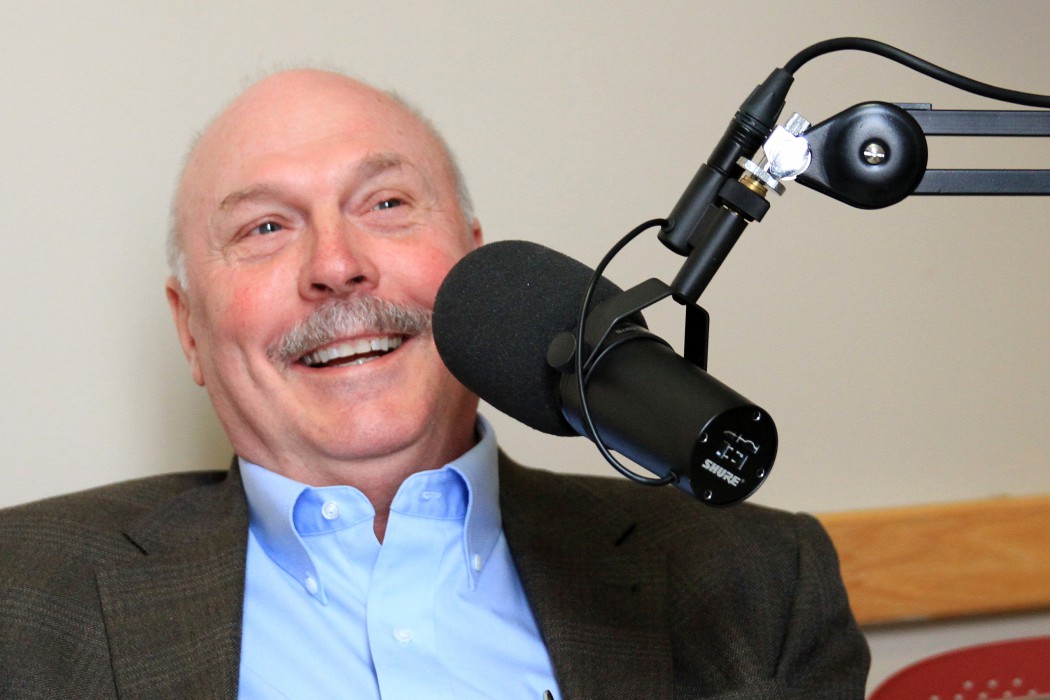 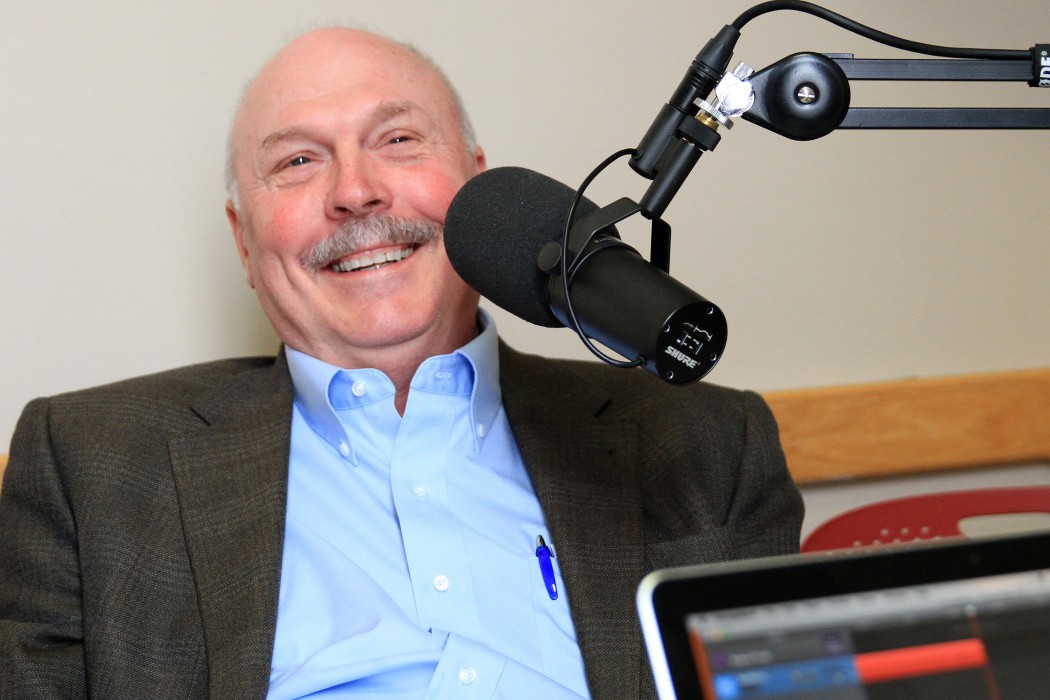 “There are always twists and turns in life,” Dennis Dean ’73 told students and faculty Tuesday in Hays Hall as he delivered the Haines Lecture in Biochemistry. “Some of your worst experiences and biggest challenges may end up with very good outcomes.”

In the case of Dean—who today is Virginia Tech Distinguished Professor of Biochemistry and Executive Director of the Fralin Life Science Institute—a life-threatening emergency led to the moment he realized his work was truly worthwhile.

“I’m very passionate about my work, and I worked really, really hard,” Dean explained. “I was driven, worked seven days a week, ten hours a day. And I did pretty well.

Rushed to the hospital, Dean found himself in a hospice room. When a doctor told him he was suffering from severe heart failure, Dean asked nervously but almost in jest, “How long do I have.” The doctor looked at his watch.

But Dean survived the night, his condition improved, and he was sent home, told to stay in bed and rest. In six weeks, if he got stronger, he would be re-evaluated for a possible heart transplant or surgery.

“Keep in mind I was used to working every day,” said Dean. “It’s amazing what you can do with your brain when you don’t have anything else to do and you don’t want to go crazy thinking about dropping dead.”

So he reflected on his research and asked himself, If you’re going to die, and you had one last experiment to conduct, what would it be?

Dean made a near-miraculous recovery, was cleared for surgery, and four weeks after the operation was back in the lab.

But he applied to his research the new attitude and clarity he’d gained imagining that final experiment.

“In the next six weeks we accomplished more than we had in the previous six years,” Dean said. “It’s great to have passion, but not so much that it can kill you.

In fact, much of Dean’s best work was inspired by the life-changing emergency.

He described the focus of his research as “working on nitrogen fixation”—taking di nitrogen out of the air and making fertilizer.

“Basically, my job is making poop,” Dean said to the laughter the lunchtime crowd. “You don’t get invited to the president’s office very often for cocktail parties to talk about making poop. It’s very important and there’s some really cool science behind it, but it’s not the sort of thing that makes you feel great about your career.”

But there are those twists and turns.

Dean explained that nitrogen fixation is one of three major processes that sustain life on earth—along with photosynthesis and respiration. All three are driven by oxidation-reduction reactions that involve small clusters made of iron and sulfur.

“The problem is that both iron and sulfur in free form are extremely toxic, so cells must capture iron and sulphur and mobilize it and combine it in the cell without killing the cell,” Dean explained. His lab discovered the enzymes responsible for this process.

“It’s a fundamentally important discovery. Every living organism depends on this process, and students in my lab discovered it.”

The discovery has deep implications in the medical field.

“The enzymes we discovered are very important, because if they screw up, free iron and sulfur which are very toxic go places they shouldn’t be,” Dean explained. That can manifest in “all sorts of nasty diseases,” including Friedreich’s ataxia, a congenital, debilitating, eventually fatal degenerative neuro-muscular disorder.

“I don’t work on those diseases,” Dean said. “But once we discovered those enzymes, people in the biomedical community started to recognize how important those enzymes are, and therapeutic intervention is now the target.”

The connection between his research and efforts to treat Friedreich’s ataxia is so strong that Dean was invited to speak at a conference for physicians and scientist who are working for a cure.

“There was a group of children there who have this disease, and it was heartrending to see these kids who could barely walk or breathe,” Dean recalled.

After he made his presentation to conference, he was approached by three of the young patients.

“Today I tell students that, as a researcher and a professional, you will have the opportunity to truly touch the lives of people you don’t even know, and you’ll do it in ways you never thought possible. And that makes this life, and this career, worthwhile.”

Dr. Dean will be featured in an upcoming podcast on Wabash On My Mind