Richard Paige—Professors Joyce Burnette and Ethan Hollander may not have won their respective races Crawfordsville City Council last fall, but both learned a great deal about themselves and their community. They hope their students will learn something, too. 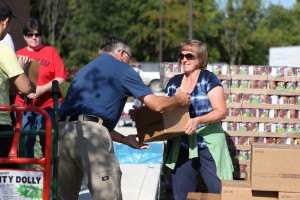 “From campaigning I learned that this town is full of people who care about their community,” says Professor of Economics Burnette. “I learned that people are concerned with the quality of jobs available, and whether there are things for young people to do.”

Associate Professor of Political Science Hollander learned how little it really takes to make a big difference in this community.

“It’s a small place and every voice can count, but only if people are willing to get up and do something. Some of our city council races were decided by dozens—not hundreds, and certainly not thousands—of votes. That means that even just a small group of people could have changed the outcome.”

The duo were part of a slate of Democratic candidates that increased dialogue citywide with competitive races in each ward. Knowing they’d be campaigning with a solid team aided both political newcomers in the decision to run.

“I was willing to do it because I wasn’t doing it alone,” Burnette explains. “Having five other Democrats run made the whole thing easier and more fun.”

Hollander praised the teamwork and the experience of walking the district and meeting voters together.

“I didn’t know how to campaign, but knowing that I’d be doing it alongside people like Joyce, Elizabeth Justice, and Mike Reidy [H’04] gave me the assurance that, when I had any questions, I’d have people to ask.”

Hollander’s experience made him acutely aware that the city is far greater than the tight-knit academic community of the College.

“There is a lot to love about Crawfordsville,” says Hollander. “But we’ll never see that if we don’t look. And we’ll never look if we start out with unfounded assumptions about how intolerant, uninteresting, homogeneous, conservative, and closed-minded it is.”

Hollander encourages his students to leave their preconceived notions behind, as well, and realize their potential to positively impact the community during their four years in Montgomery County.

“I hope our running for office sends them the message that Crawfordsville is the city they live in, not just the city where their college is located. That’s a key difference, and if they realized it, it might encourage them to take advantage of what the city has to offer.”