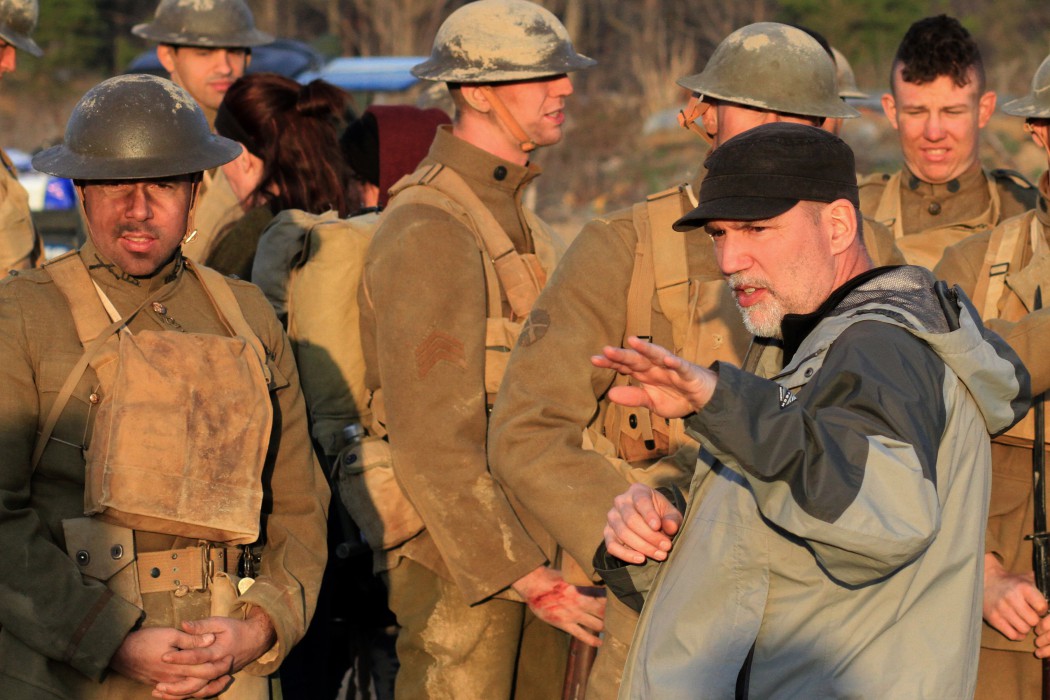 Jo Throckmorton ’87 directs U.S. Army Maj. Spencer Wallace (far left) and other members of the 3d U.S. Infantry Regiment who depicted World War I American soldiers in the documentary about the Meuse-Argonne Offensive. 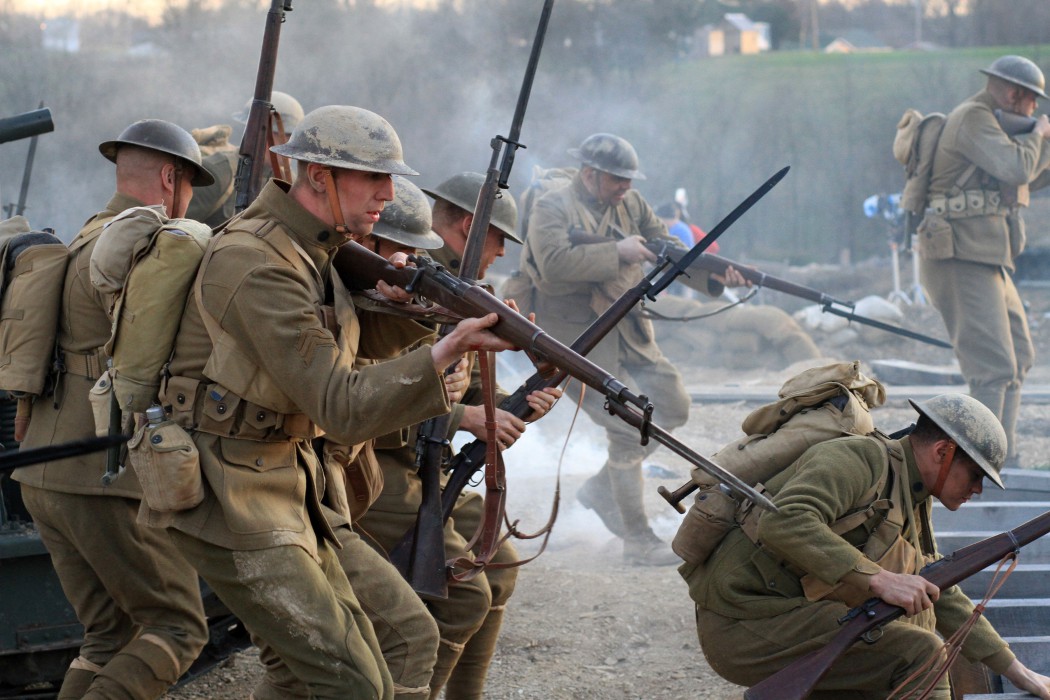 Filming one of the scenes from the documentary. 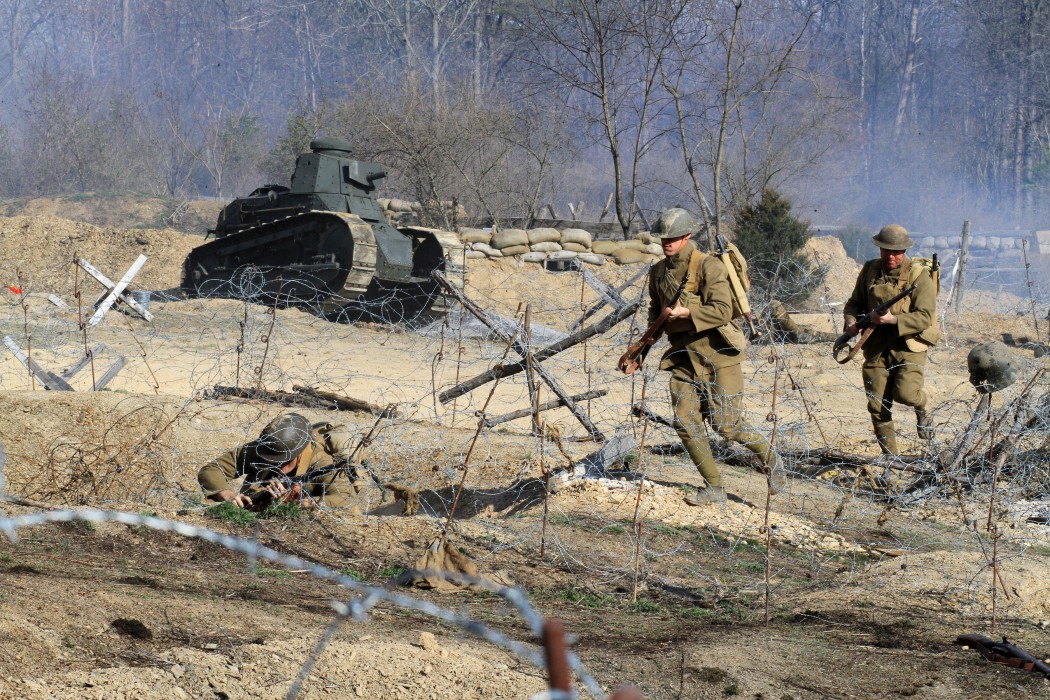 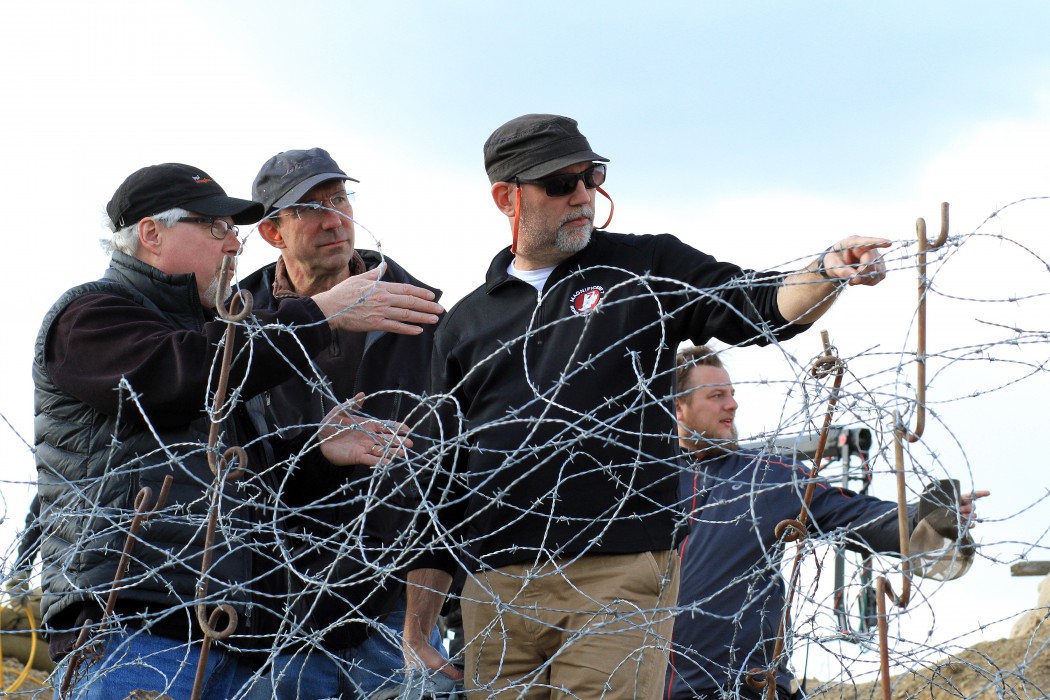 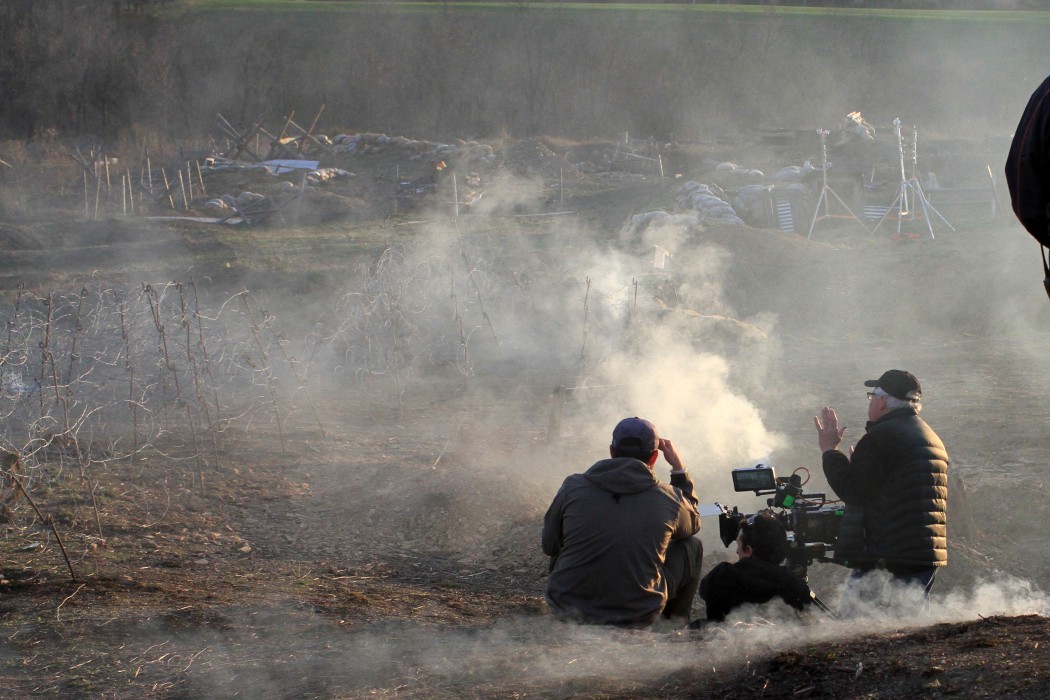 Noll (right) checks out the shot from the camera position in No Man's Land at the Great War Association’s battlefield site outside of Newville, PA. 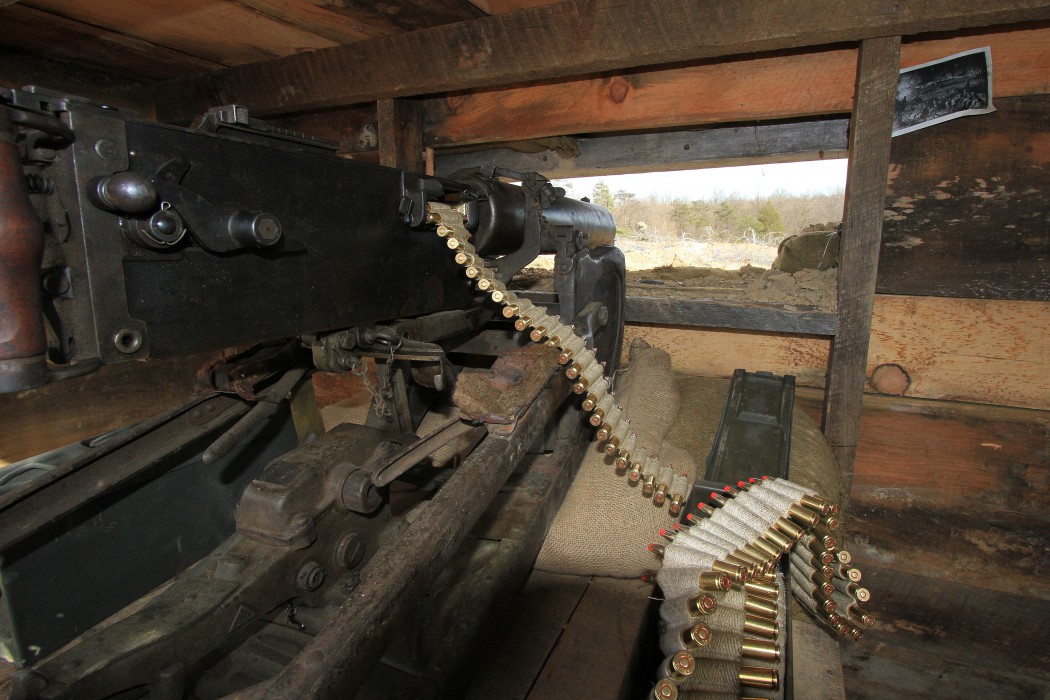 The view from the German machine gun nest. 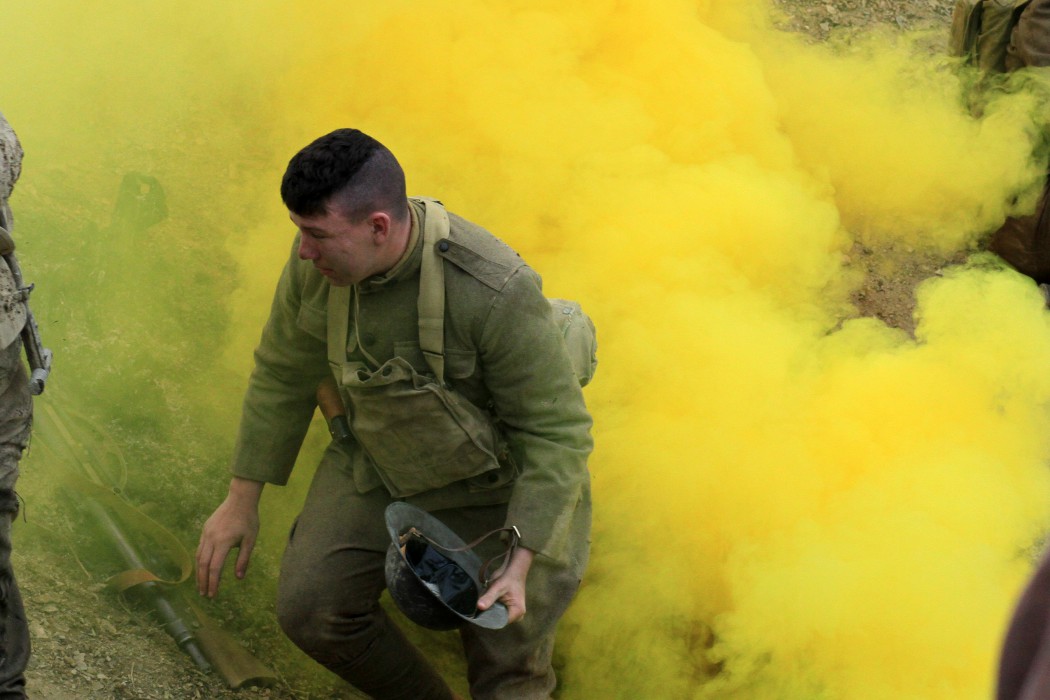 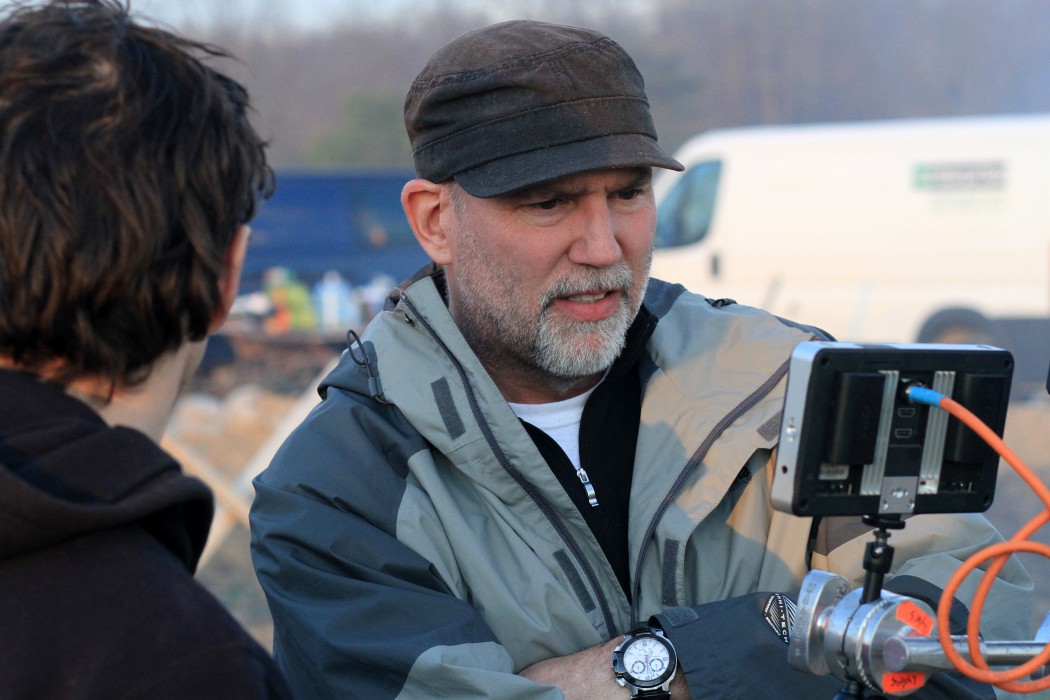 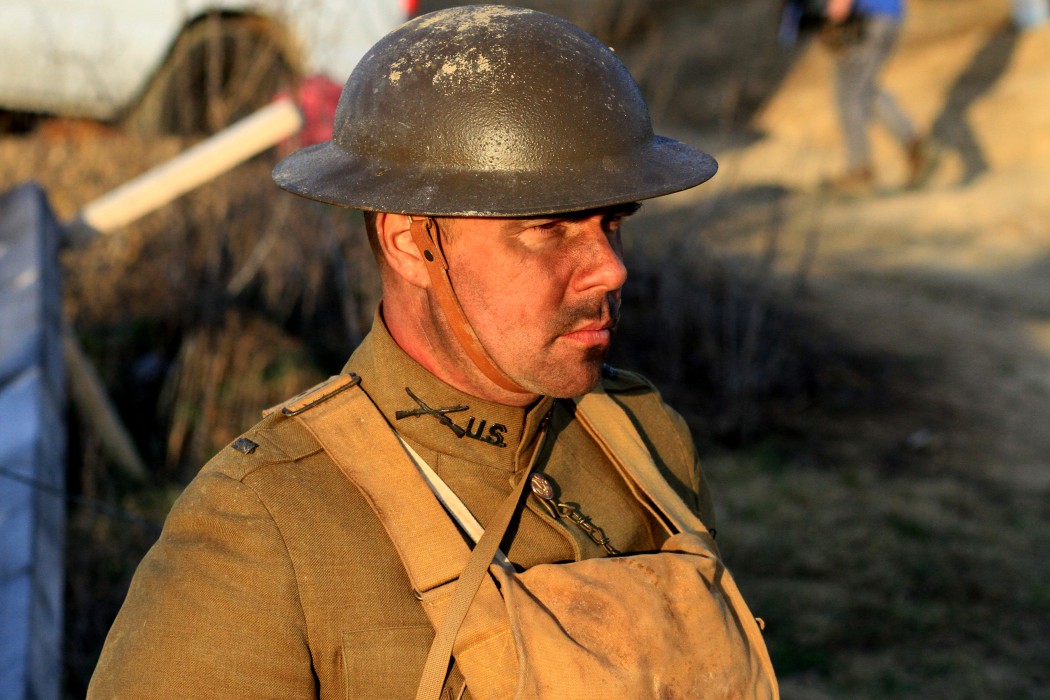 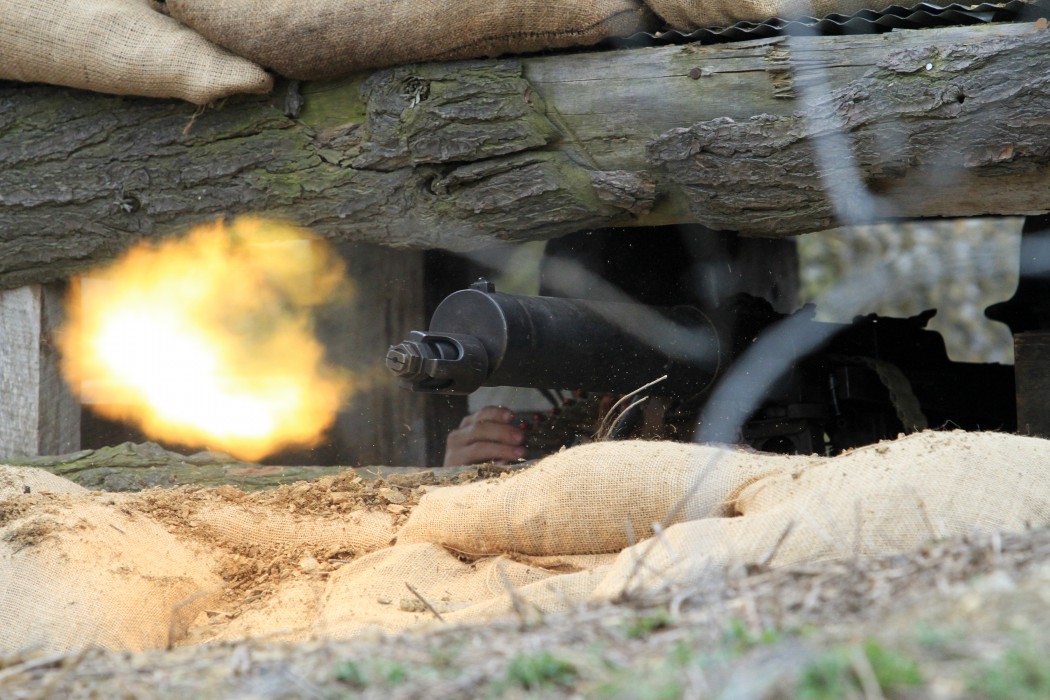 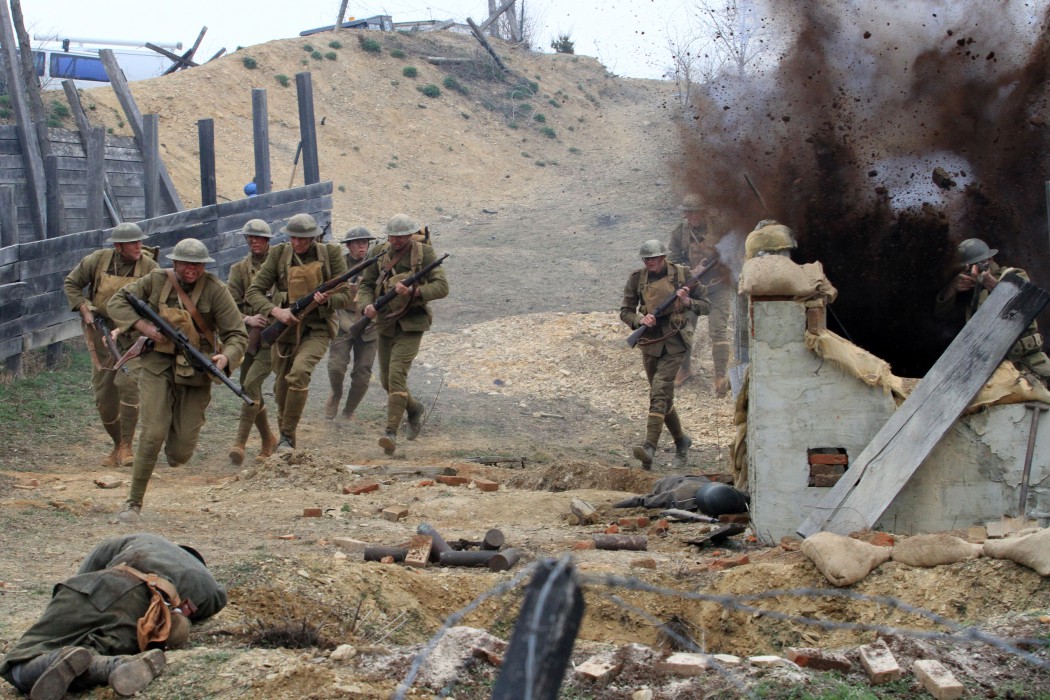 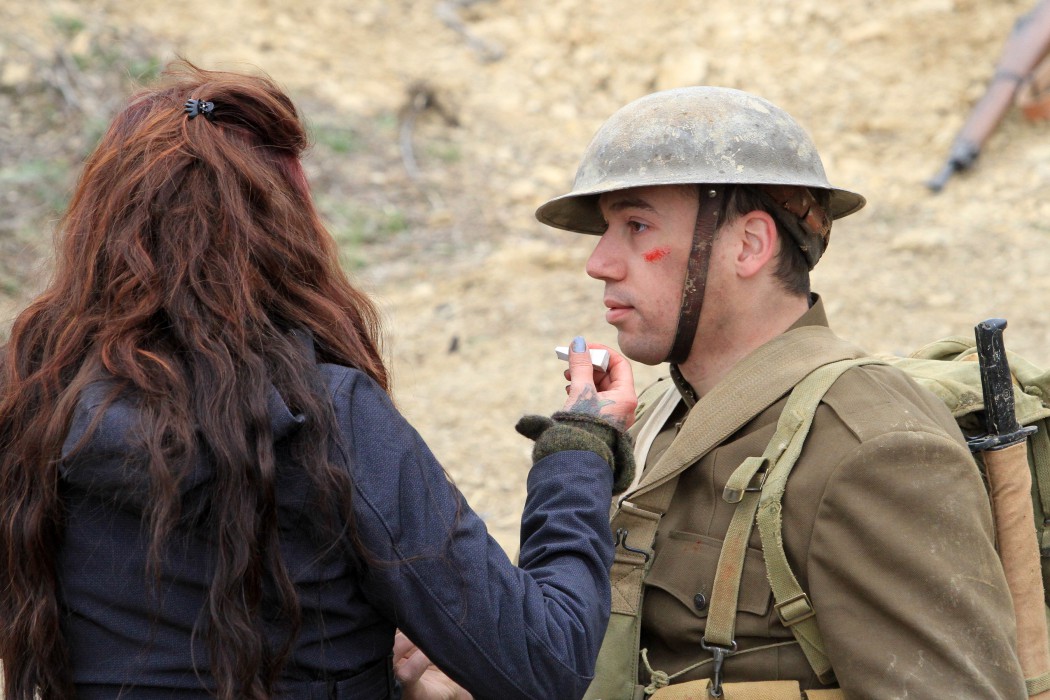 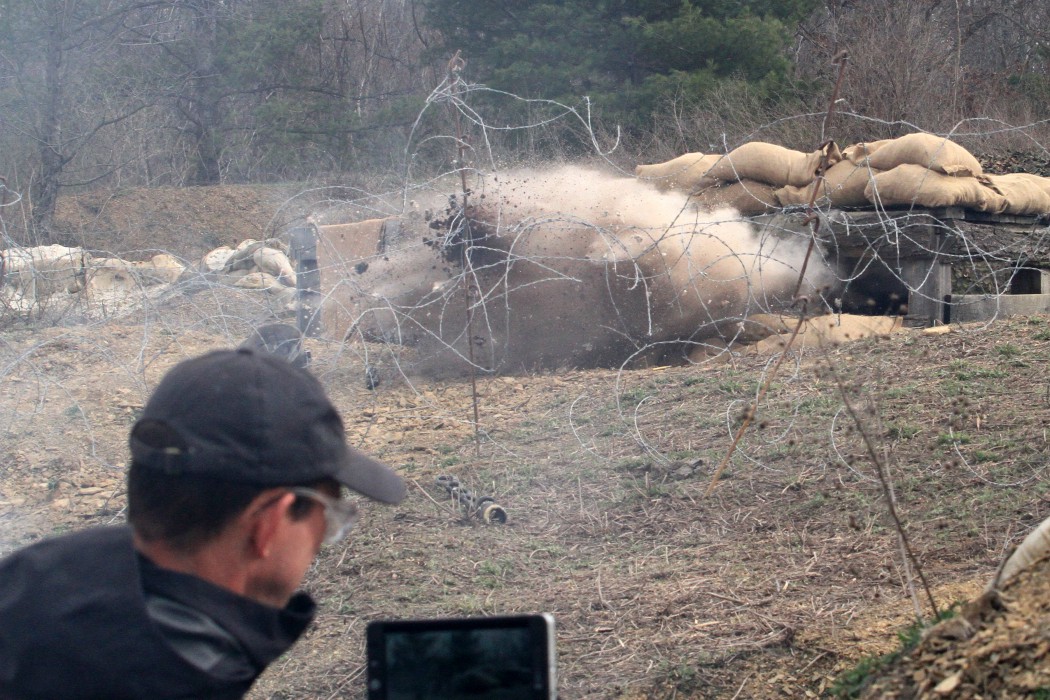 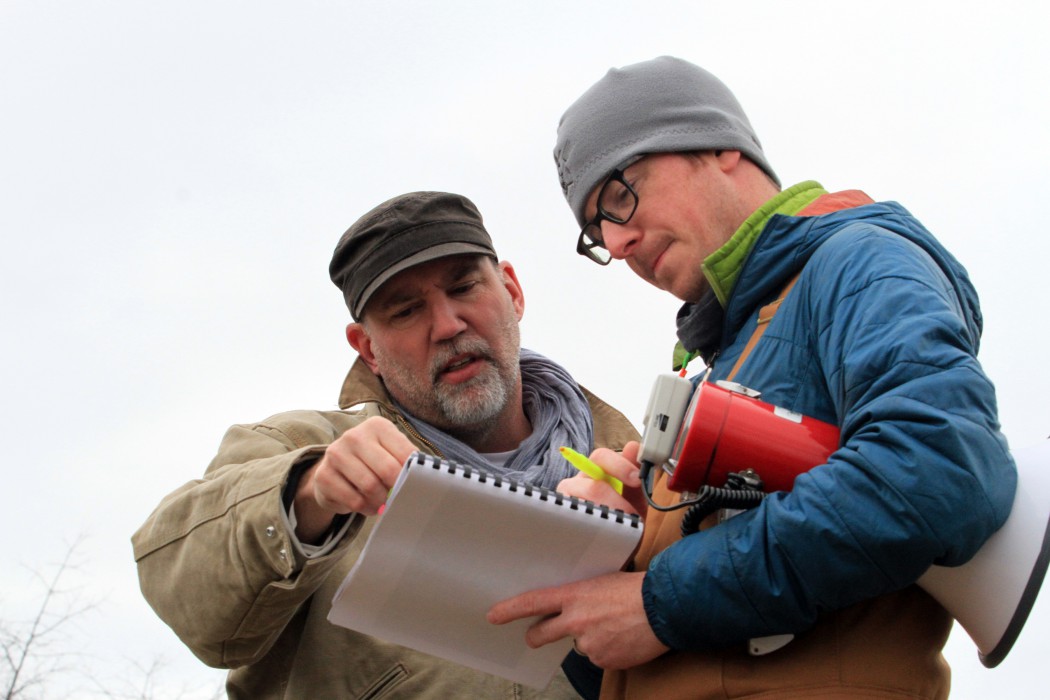 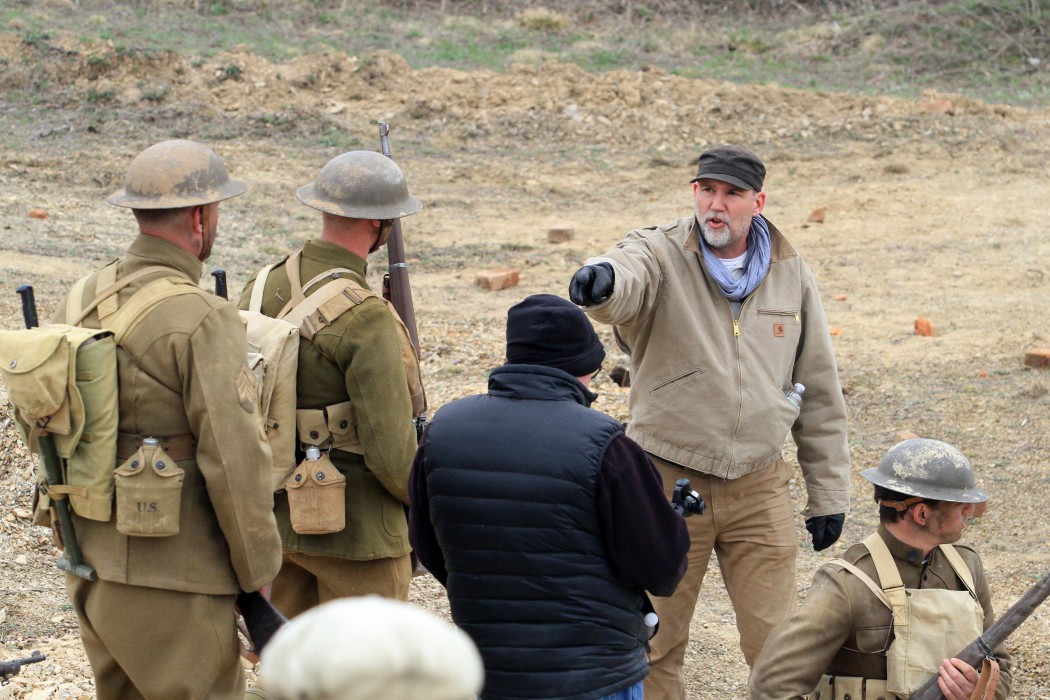 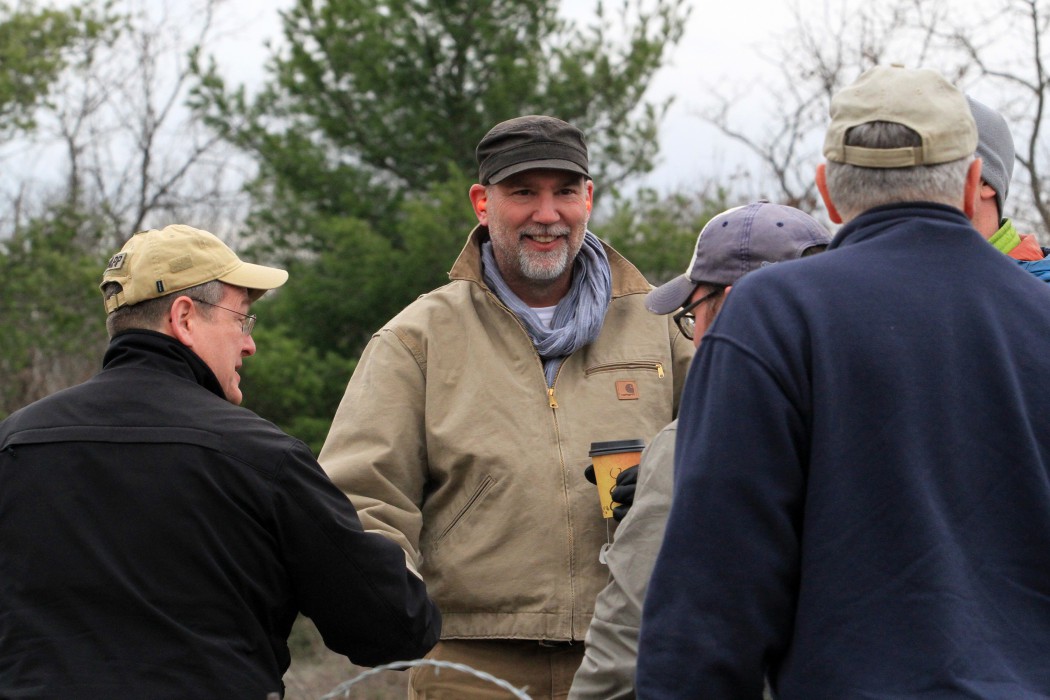 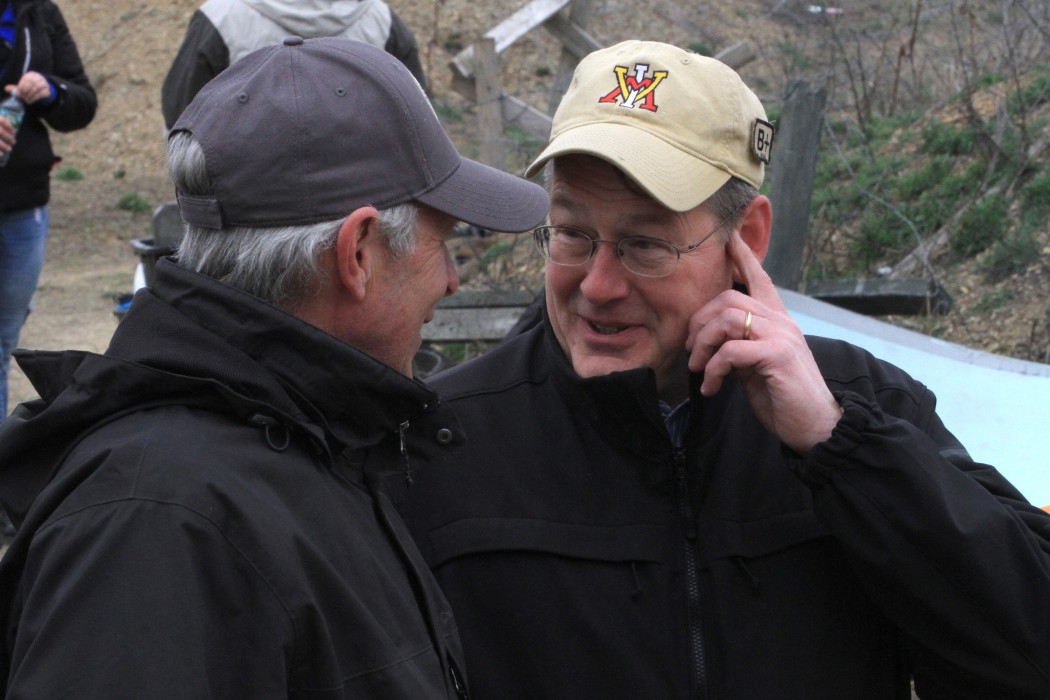 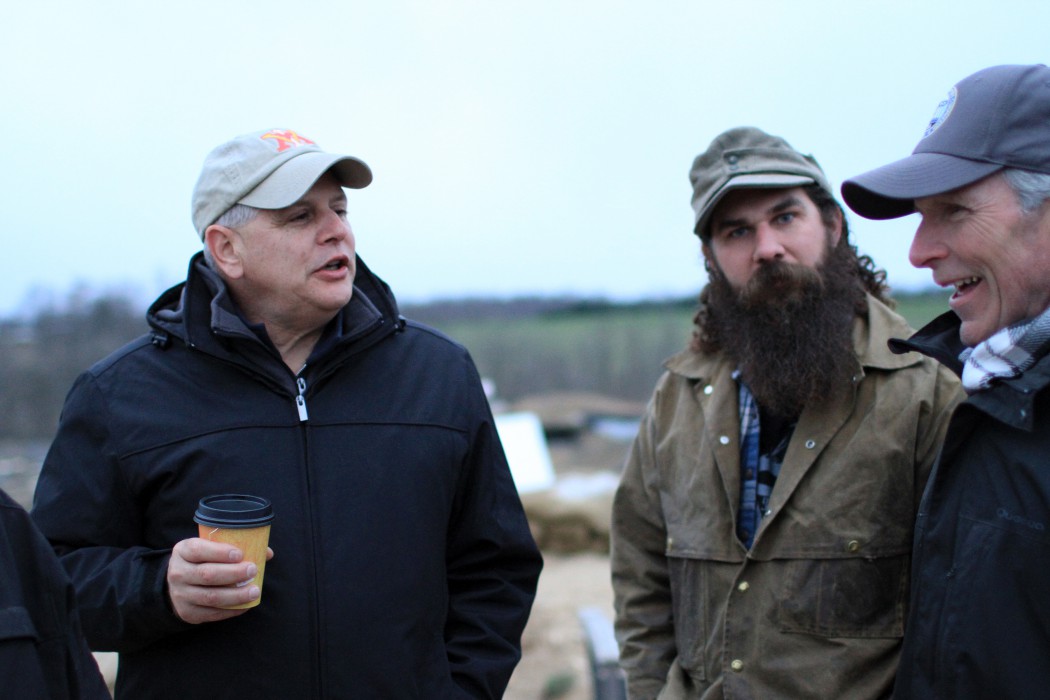 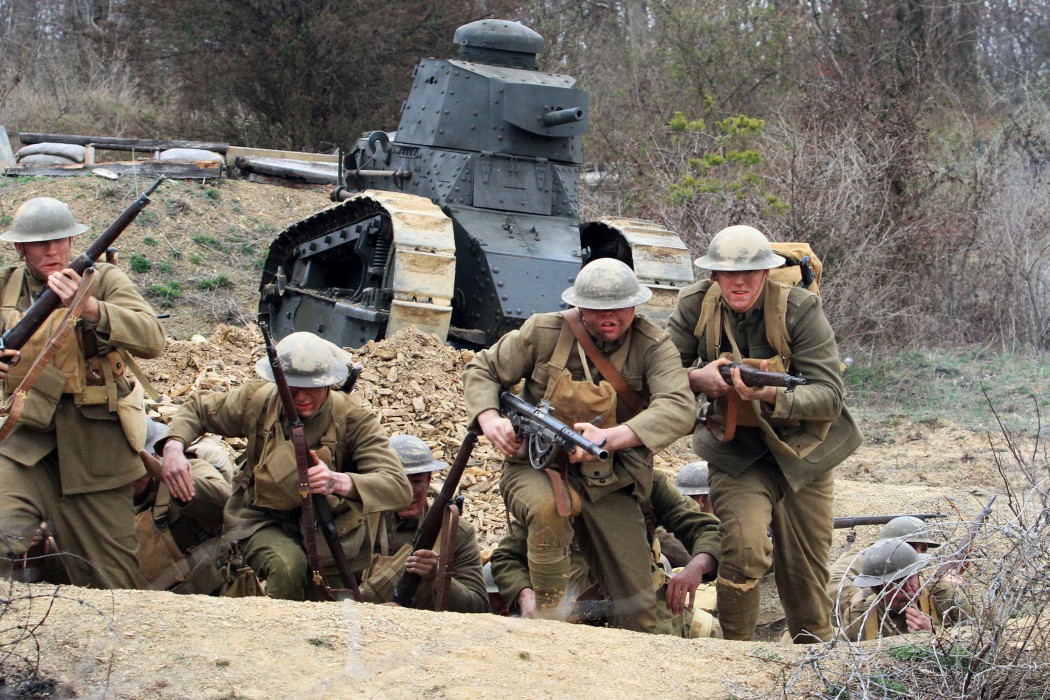 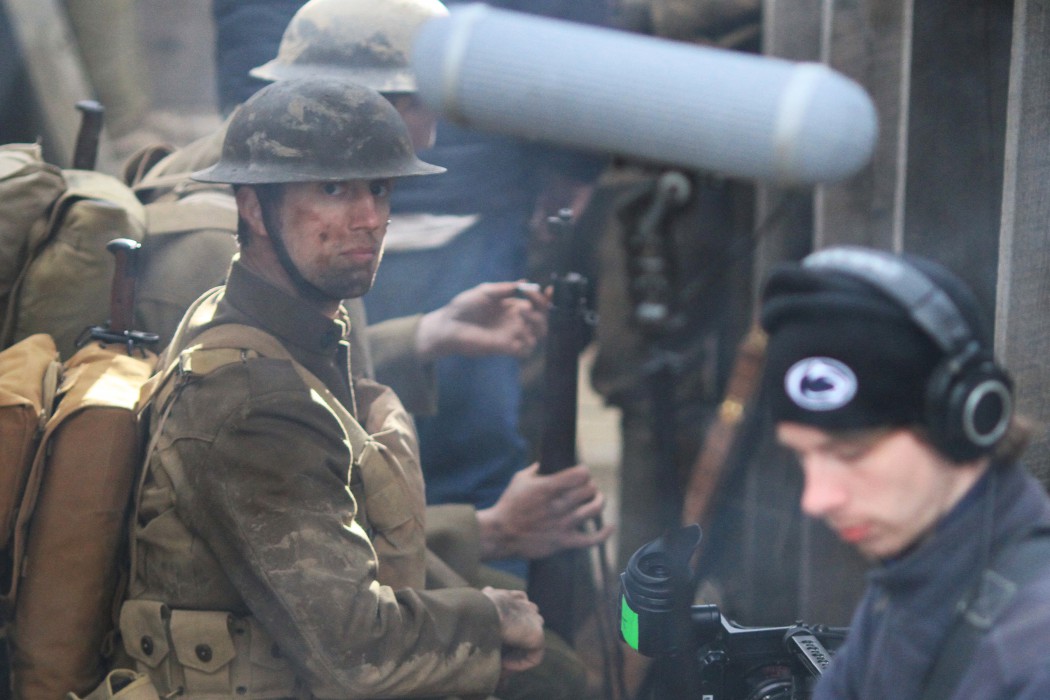 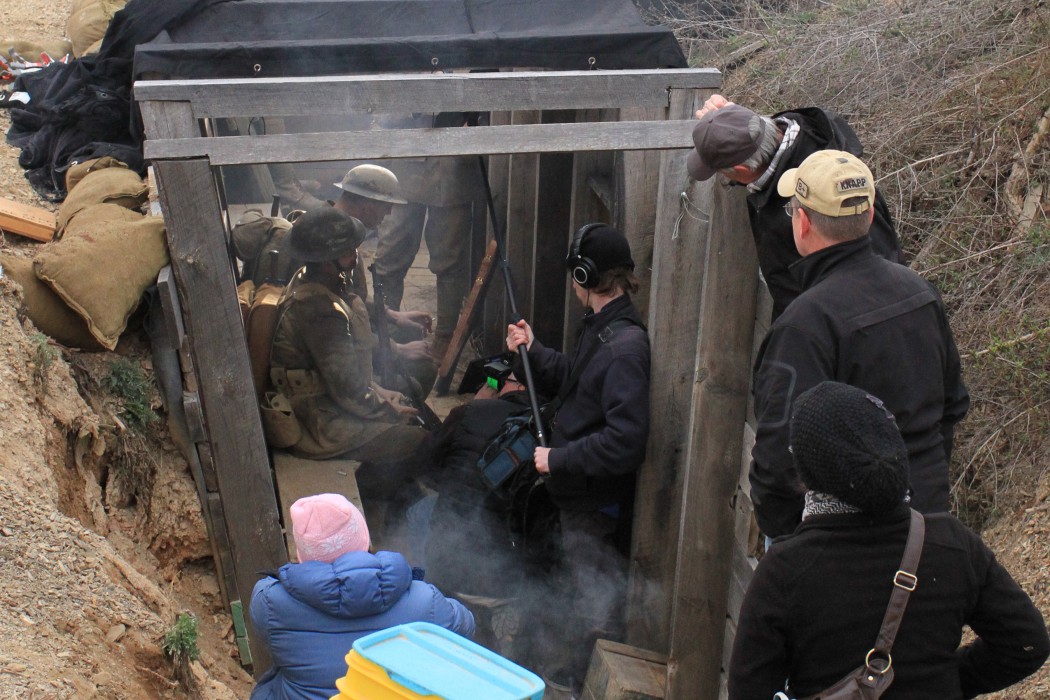 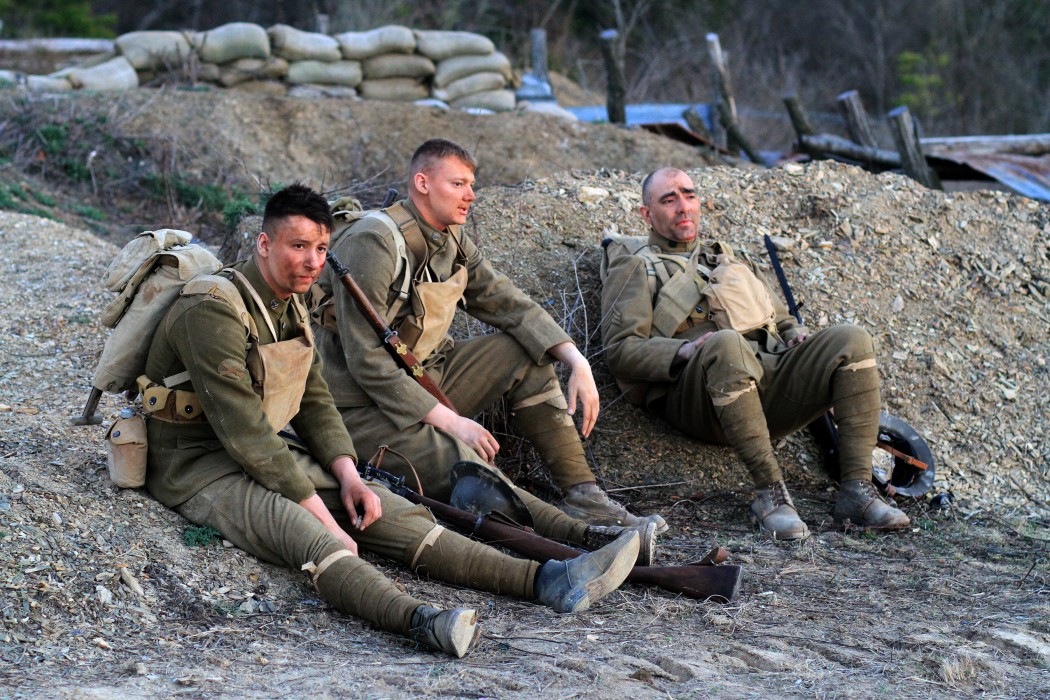 It could be the place the phrase “hell on earth” was invented.

Lift your head above the rim of the crater, you’re dead. But you can’t stay here long.

Then a shell containing poison gas hits near the center of the crater. Two men panic, scramble out, are mowed down almost instantly by gunfire. Others struggle to put on their gas masks, while others are overcome by the direct attack of mustard gas.

Similar moments repeated themselves over and over during the savage battle now known as the Meuse-Argonne Offensive—the Battle of the Argonne Forest. The largest independent American offensive against the Imperial German Army during “ the war to end all wars,” it produced an estimated 110,000 American casualties—more than 2,300 per day.

And this scene was one of many captured last Saturday by award-winning director Jo Throckmorton ’87 and his creative collaborators filming a documentary he hopes will remind today’s generation of the terrible sacrifices made by American soldiers during “the war to end all wars.”

The film, shot at the Great War Association’s battlefield site outside of Newville, PA, was commissioned by the American Battle Monuments Commission, is being produced by Boston Productions Inc. with BPI’s Chief Creative Officer Bob Noll as director of photography, and will be displayed at the Meuse-Argonne Cemetery in France, where more than 14,000 American soldiers are buried.

“The film represents the experiences of American troops in this Argonne campaign,” says Mike Knapp, Director of Historical Services the Commission. “We’re hoping that when visitors come to the cemetery and see the film they’ll get a deeper understanding—rather than just seeing headstones and the crosses and the walls of the missing, they’ll have a better sense of what our soldiers went through in that battle.”

Most of the “actors” in the film are from the the 3rd United States Infantry Regiment—known as the “Old Guard.” The regiment has served since 1784 and is the Army’s oldest active duty infantry unit.

“Rather than trying to find actors or re-enactors, we reached out to the Old Guard,” says Knapp, who was one of several historical advisors for the project. “It gives them a connection—helps them understand their heritage. And they are all the right age. It’s hard to find actors or reenactors who are all the right age, fit, and trained as infantryman, and that’s what we were able to get. And it’s paid off huge dividends.”

Also advising Throckmorton is the Commission’s Deputy Secretary and historian Rob Dalessendro. He hopes the film and the centennial observances of World War I will remind today’s generation of the hardships and sacrifices of American soldiers during World War I. He notes that World War I veteran and author Laurence Stallings in his book The Doughboys worried that these sacrifices seemed to be forgotten.

“Stallings bemoans the fact that if you asked any child in America in 1940 what the pivotal battle was in American history, that child would say Meuse-Argonne,” Dalessendro explains. “He says by the fall of 1945, a child might answer Normandy or the the Battle of the Bulge. World War I was forgotten, and all those people who perished for America in World War I were forgotten.

“I’d like us to redeem this—and have children today at least know where the Meuse-Argonne was and know that we fought there.”

We’ll have the complete story in the Spring 2016 issue of Wabash Magazine and audio and video from the set at WM Online.  In the meantime, here are some photos from the weekend’s filming at the Great War Association’s battlefield site outside of Newville, PA—a location Meuse-Argonne American Cemetery Superintendent Dave Bedford says bears a striking resemblance to the original battlefield.

Click here to watch a behind the scenes video about Morgan’s Raid, a documentary for Boston Productions on which Throckmorton also worked.