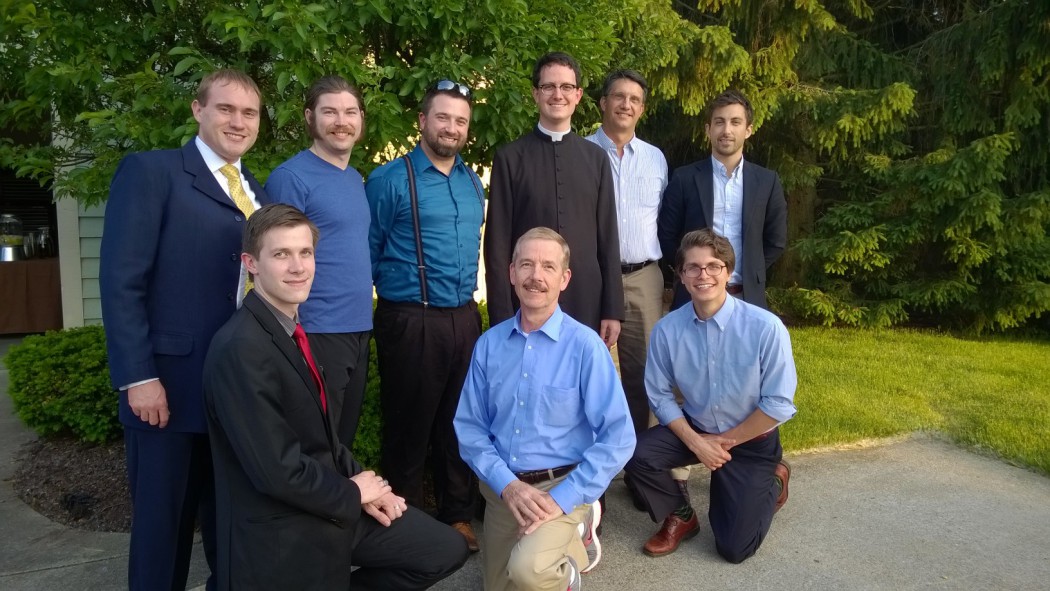 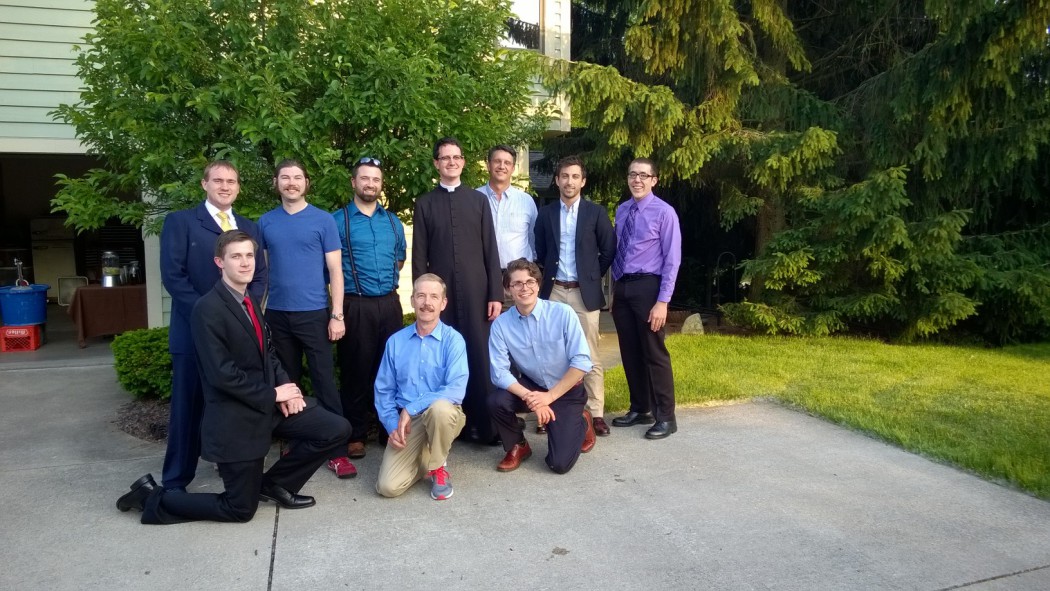 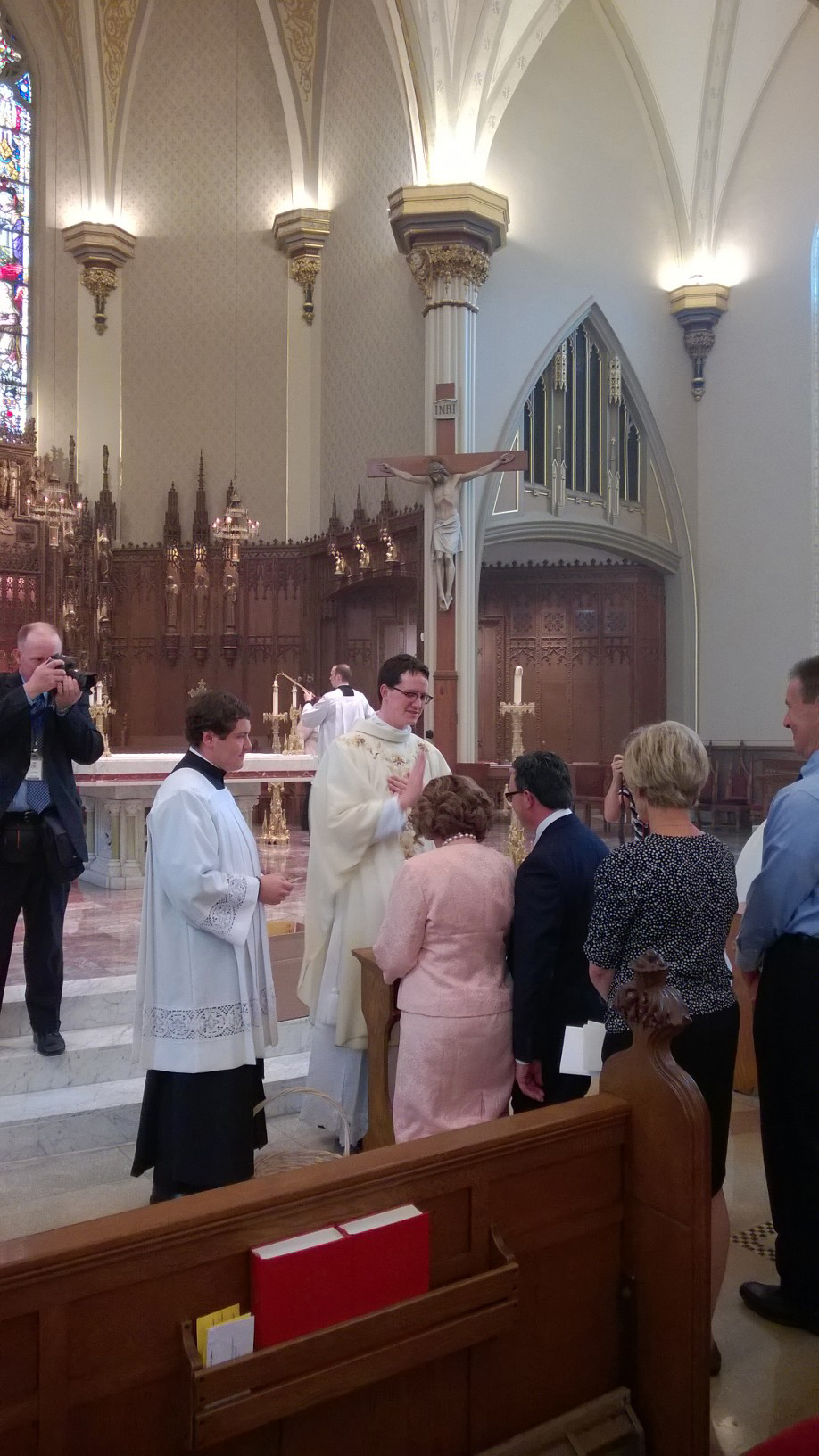 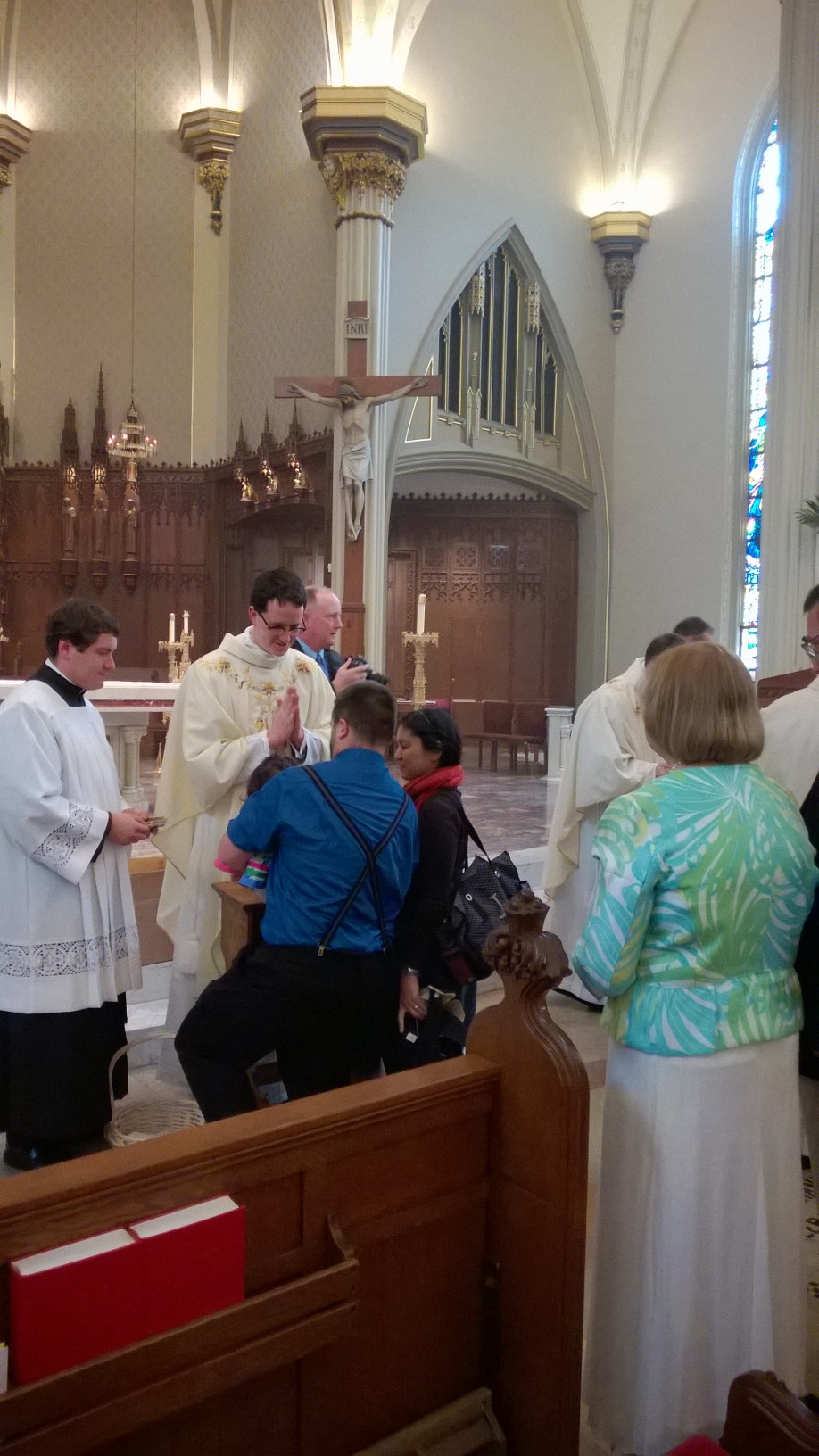 Wabash friends and family were there to celebrate last June when Royce Gregerson ’09 was ordained to the priesthood at the Cathedral of the Immaculate Conception in Fort Wayne, IN.

Gregerson brings deep relationship
with Christ to the Priesthood

Deacon Royce Gregerson has been preparing for the day of his Ordination to the Priesthood by Bishop Kevin C. Rhoades at the Cathedral of the Immaculate Conception in Fort Wayne on June 6 for many years with prayer and study, keeping his focus on the Priesthood of Christ.

“At the foundations of a priestly foundation has to be a profound relationship, a true friendship, with Christ,” he says.

A Marion native, Royce Vincent Gregerson is one of three children of Roy and Karen Gregerson, and is a parishioner of St. Elizabeth Ann Seton Parish in Fort Wayne. He received his elementary education at St. Paul School in Marion, finishing at St. Joseph-St. Elizabeth School after a move to Fort Wayne and graduated from Bishop Luers High School in 2005. He attended Wabash College where he earned a bachelor’s degree in Spanish in 2009.

Growing up in a close-knit family, Deacon Gregerson credits his parents for his deep enduring faith. “My parents very conscientiously passed on the faith to us and made sure that the formation they were giving us in the faith was being complemented by the formation in the faith we received through Catholic schools,” he says.

His parents admit they were not surprised by his vocational call to the Priesthood. “When he was a small lad he would pretend to be a priest. As he grew older he held his Catholic values to be very important,” Roy says, adding that as he and his wife pray for their son and his fellow seminarians. They feel Deacon Gregerson will be, “a very sound priest, who is placing our Lord at the center of his life. A priest that is concerned with maintaining the tradition of the holy Catholic Church.”

Karen adds of her son’s ordination, “I have a great sense of anticipation, filled with joy and feel incredibly blessed to have a priest in the family. … I feel I have become closer to Jesus because of our son’s vocation as a priest and that his Holy Priesthood will have a positive impact on many people, but especially our immediate family.”

Deacon Gregerson also found inspiration in his parish priests, especially Father Duane Craycraft and Father Jim Shafer, and adds that his Catholic education and participation in his parish youth group were essential to responding to his vocation.

Though Deacon Gregerson has always been interested in the Priesthood, it was not until high school that he gave it great consideration. He says, “There was one particularly poignant moment while I was on a service trip with my youth group in which I realized that what made me most happy was serving others, which to me seemed to be embodied above all else in the Priesthood.”

Deacon Gregerson’s seminary formation began at Pontifical College Josephinum in Columbus, Ohio, where he earned a bachelor’s degree in philosophy in 2011. He then studied in Rome where he was in residence at Pontifical North American College and in 2014 earned a Bachelor’s of Sacred Theology. Deacon Gregerson is currently working to earn a License of Sacred Theology in moral theology from Pontifical University of St. Thomas Aquinas, with an expected completion in 2016.

Seminary life has been a lesson in forming his relationship with Christ and with himself. “The seminary experience has helped to prepare me for the Priesthood above all by forming my relationship with Christ. … At the same time, seminary formation has forced me to confront myself, my own personality, limits and also strengths, and to conscientiously grow on a human level in addition to my spiritual growth,” he says.

Deacon Gregerson’s summer assignment experiences have been invaluable to his future ministry as priest. “I have had the example of many different excellent priests of our diocese to learn from, who have also encouraged me in my discernment and formation. … These experiences have made me even more excited to serve the people of this diocese as a priest,” he says.

This soon-to-be ordained priest also has a great love for music and cooking. “I think that both food and music have unique abilities to reach people, to begin dialogues about the most important things in life, as bridges between physical reality and the divine,” he says.

Deacon Gregerson was ordained to the diaconate in the Papal Basilica of St. Peter at the Altar of the Chair in Rome on Oct. 2, 2014. Now, months later, as he waits the glorious day of Ordination to the Priesthood he feels he brings his theological background and love of Christ to the Priesthood.

“The most important thing that I will bring to the Priesthood is a knowledge of Christ and a relationship with Him, a loving dialogue in prayer into which I hope to be able to introduce others,” he says, adding that his love of languages has him speaking not only English and Spanish but Italian and French as well, which will be helpful in his priestly ministry.

For those who may be discerning the Priesthood, Deacon Gregerson encourages prayer and reception of the sacraments, especially the Eucharist and Confession. Frequent conversations with a priest are also encouraged. “Above all, I would say that the most important thing is a total trust in God through prayer,” he says.

Following ordination, Deacon Gregerson looks forward to celebrating the sacraments, especially the Holy Mass, for and with the faithful.

Let us know what you’re up to! Send your news, updates, and teachable moments to Class Notes Editor Karen Handley: handleyk@wabash.edu