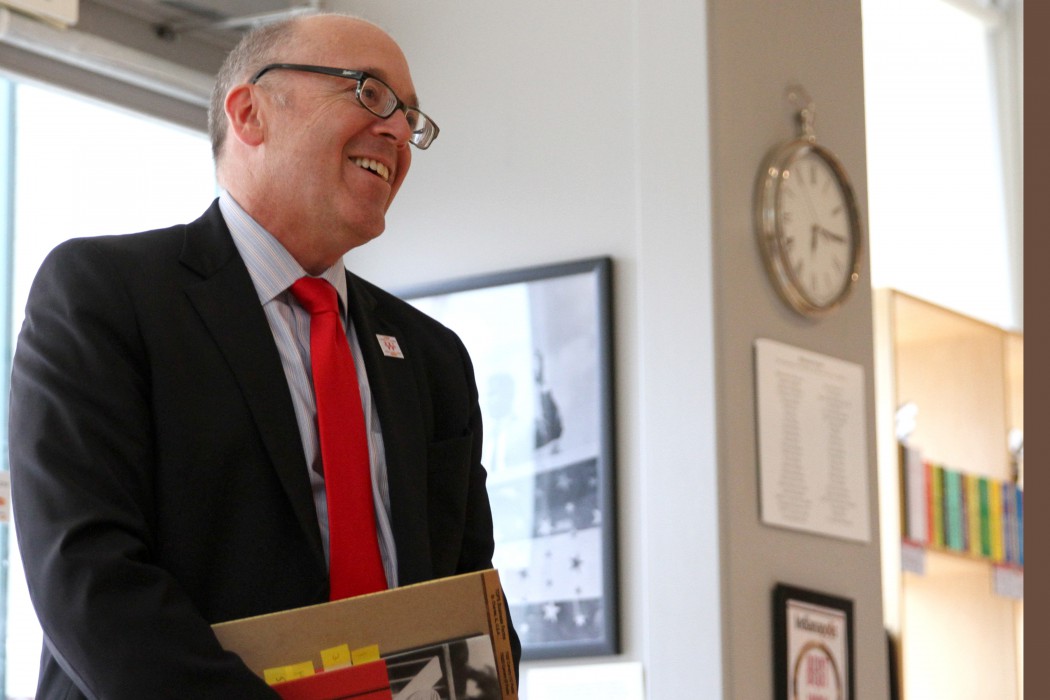 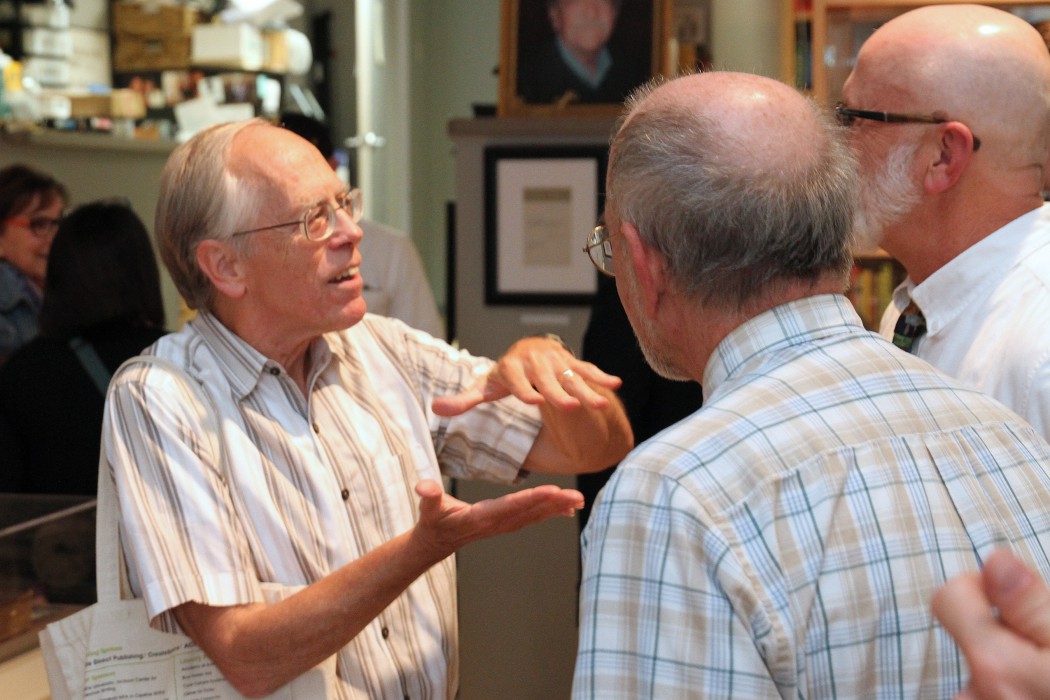 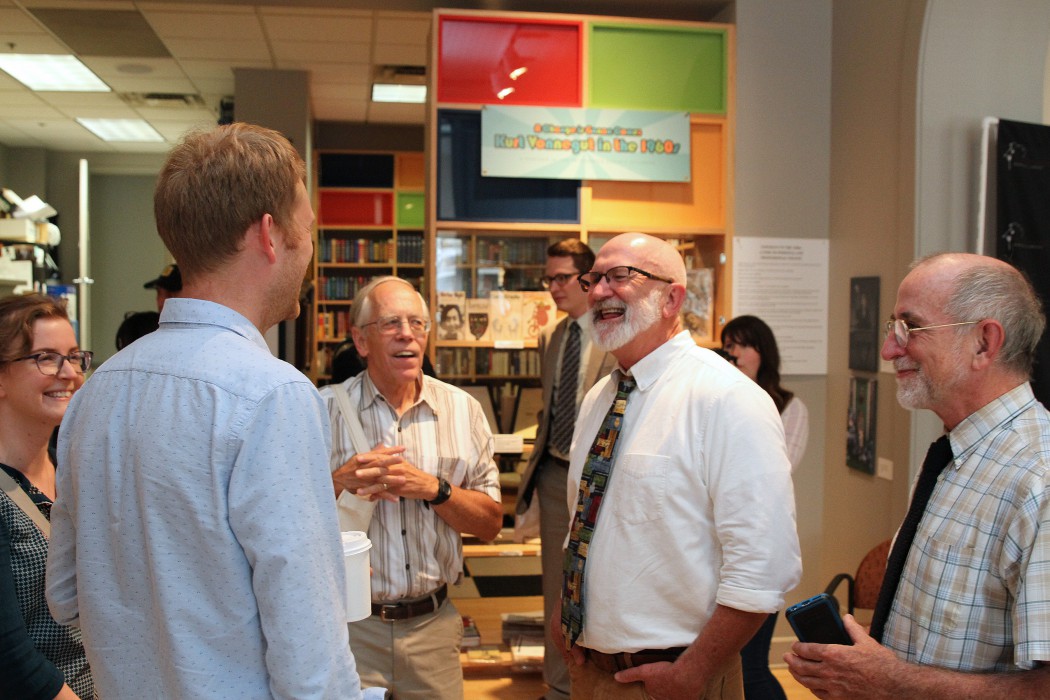 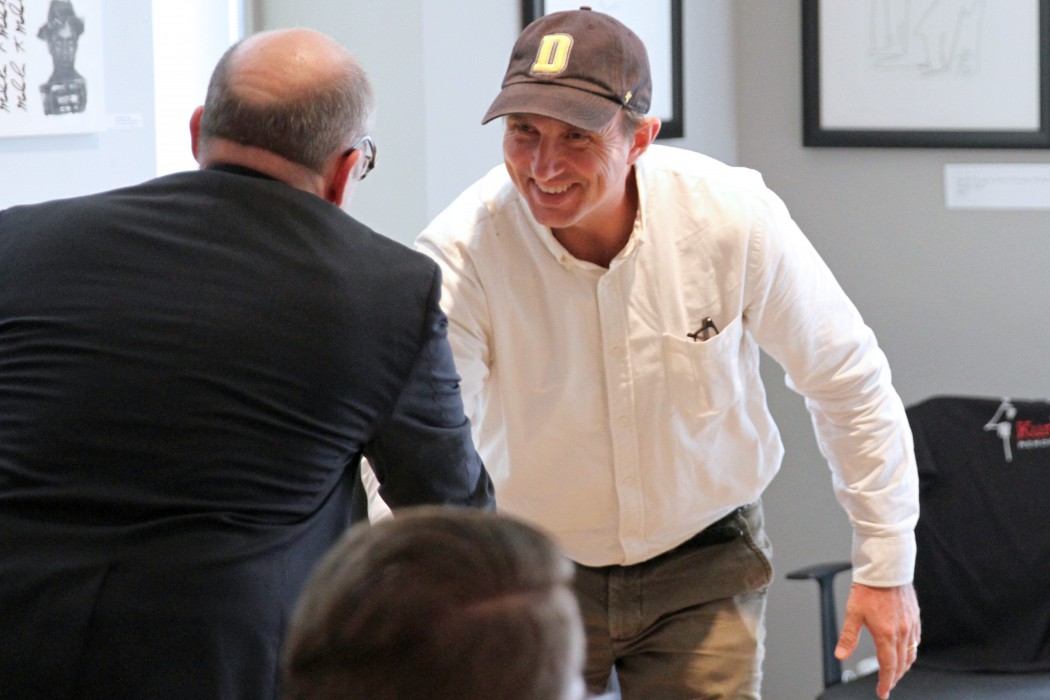 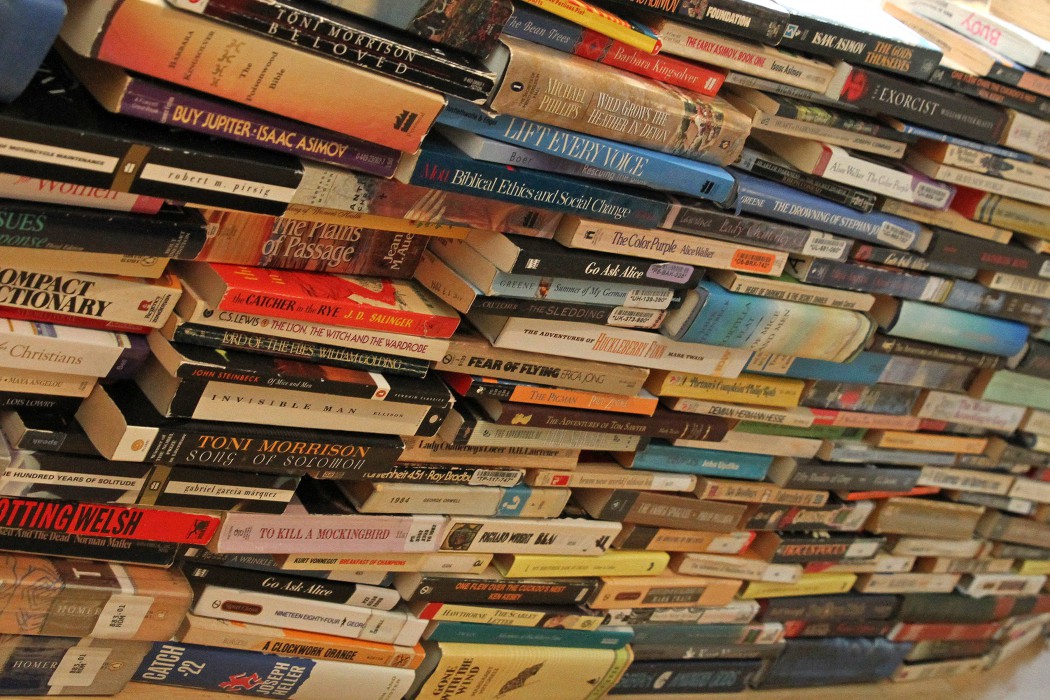 The Wall of Banned Books 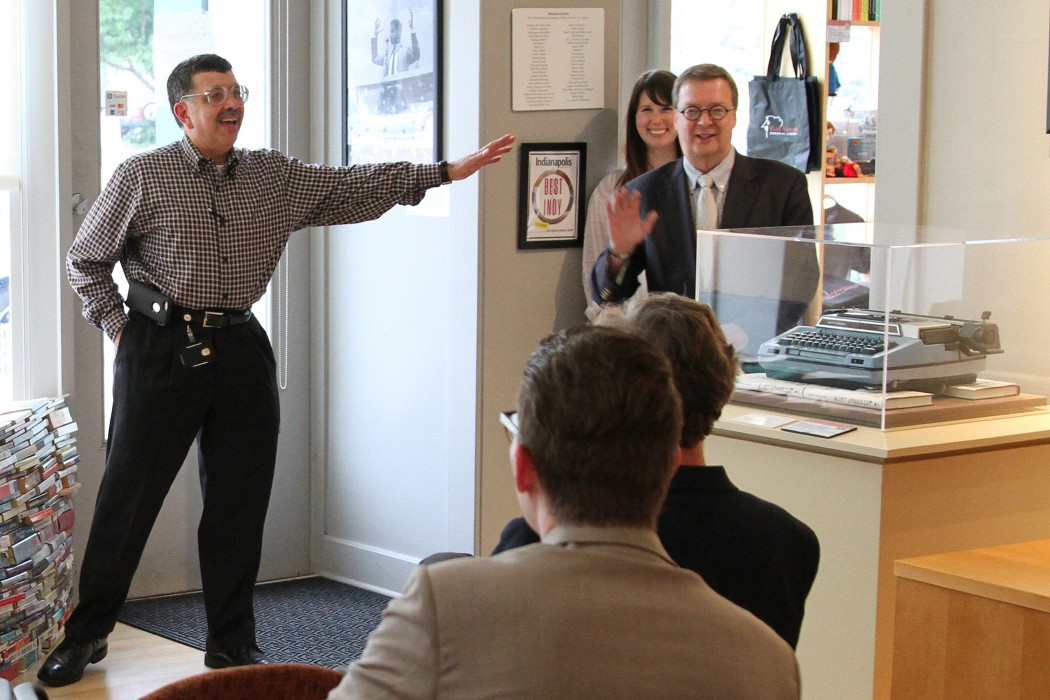 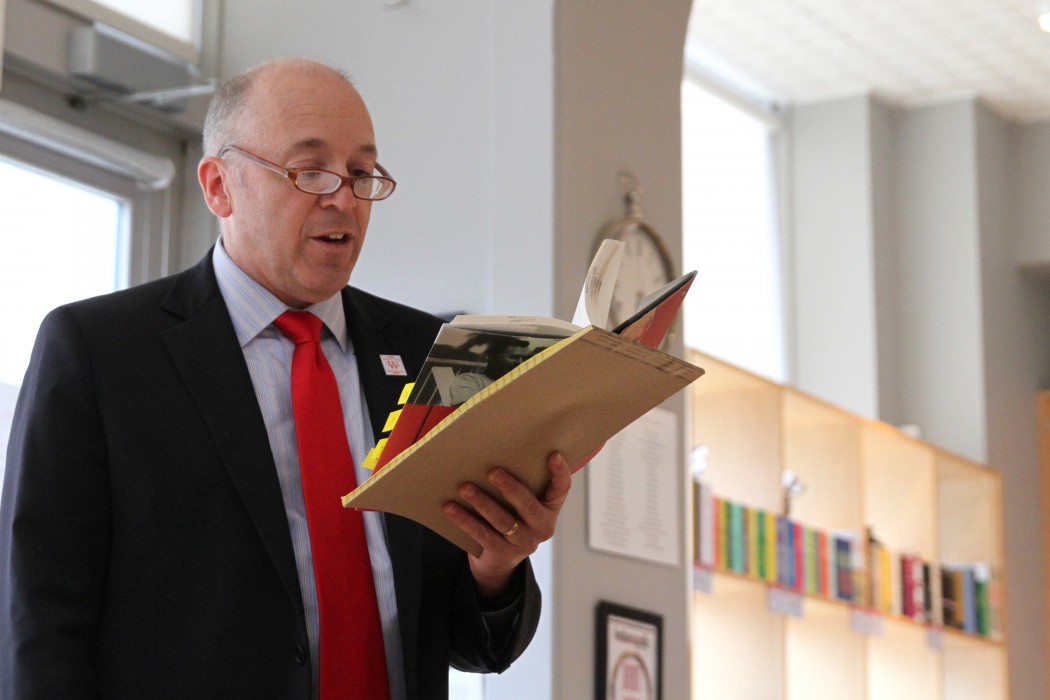 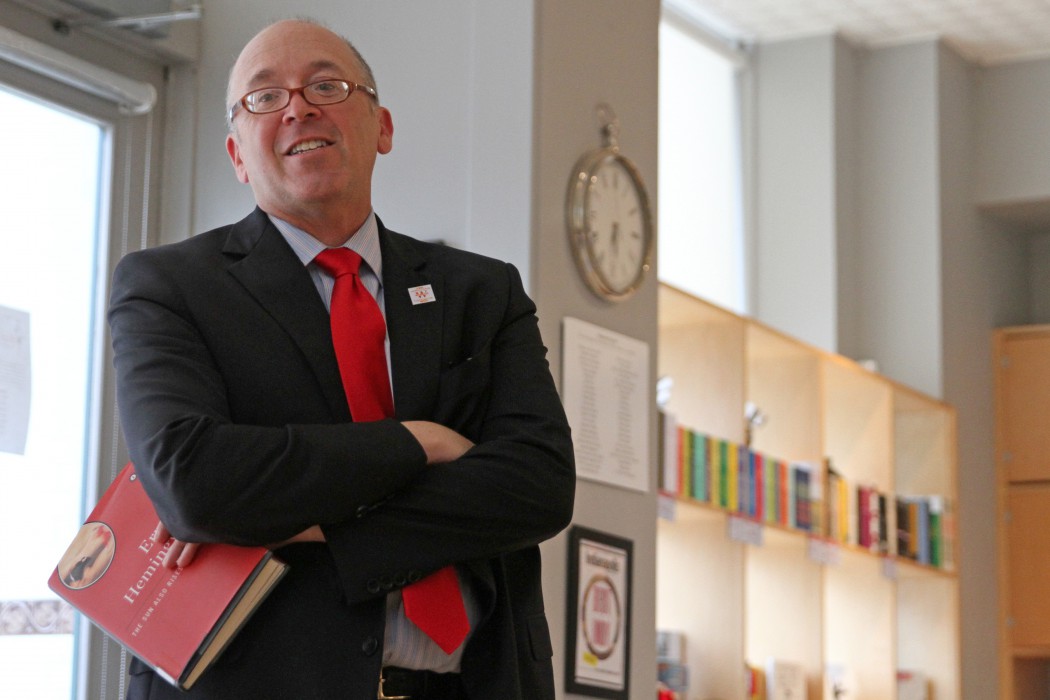 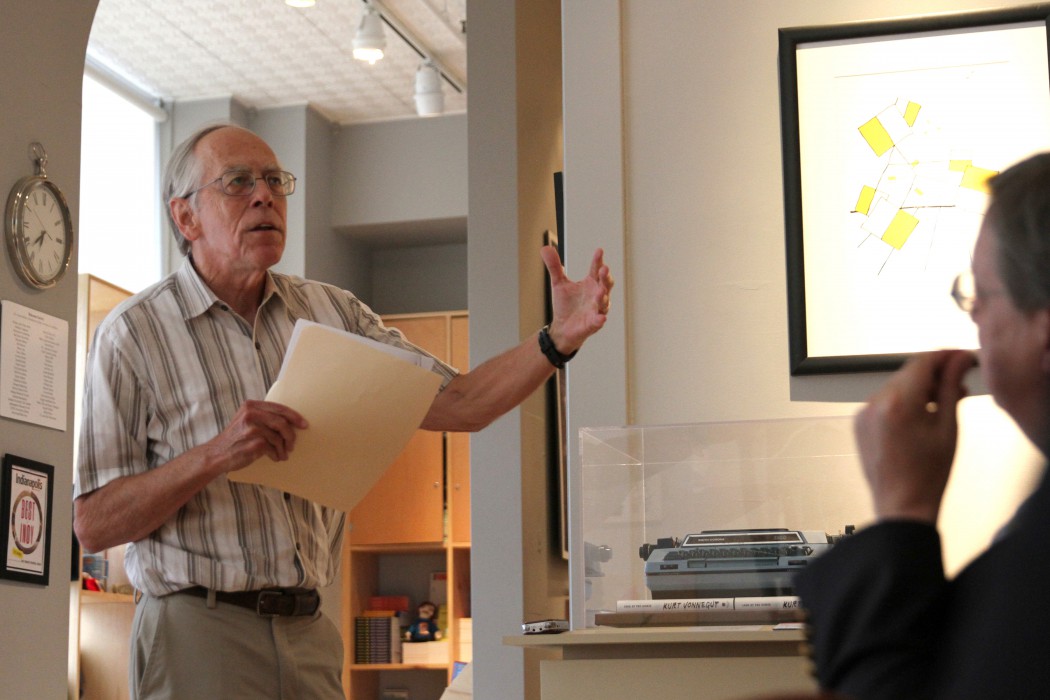 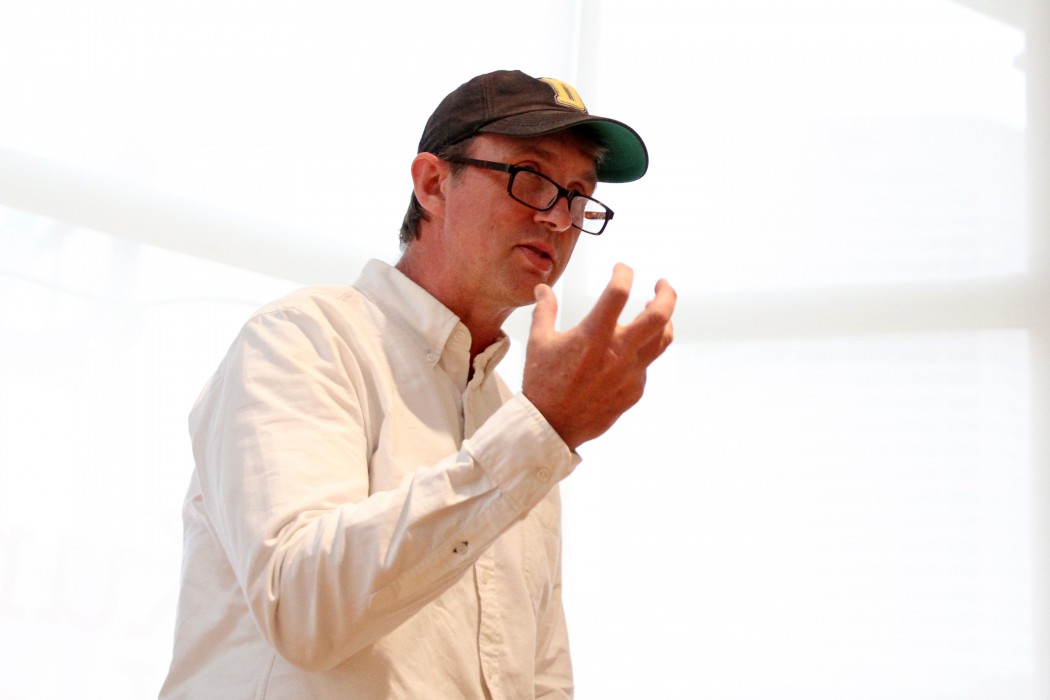 Vonnegut's Breakfast of Champions was Heithaus's "entry into reading." 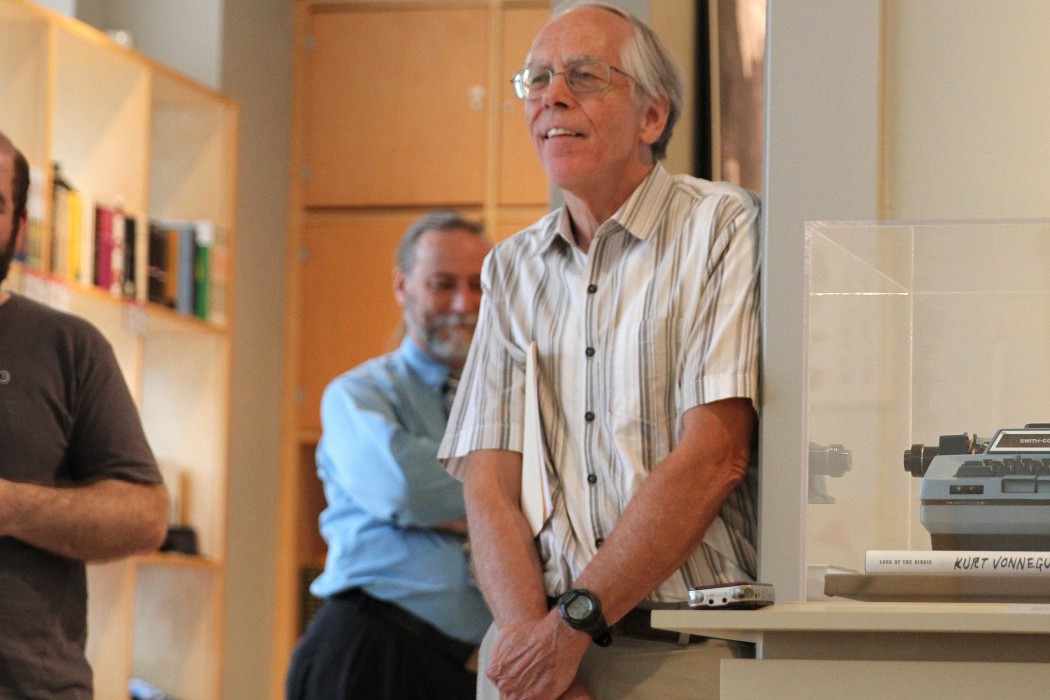 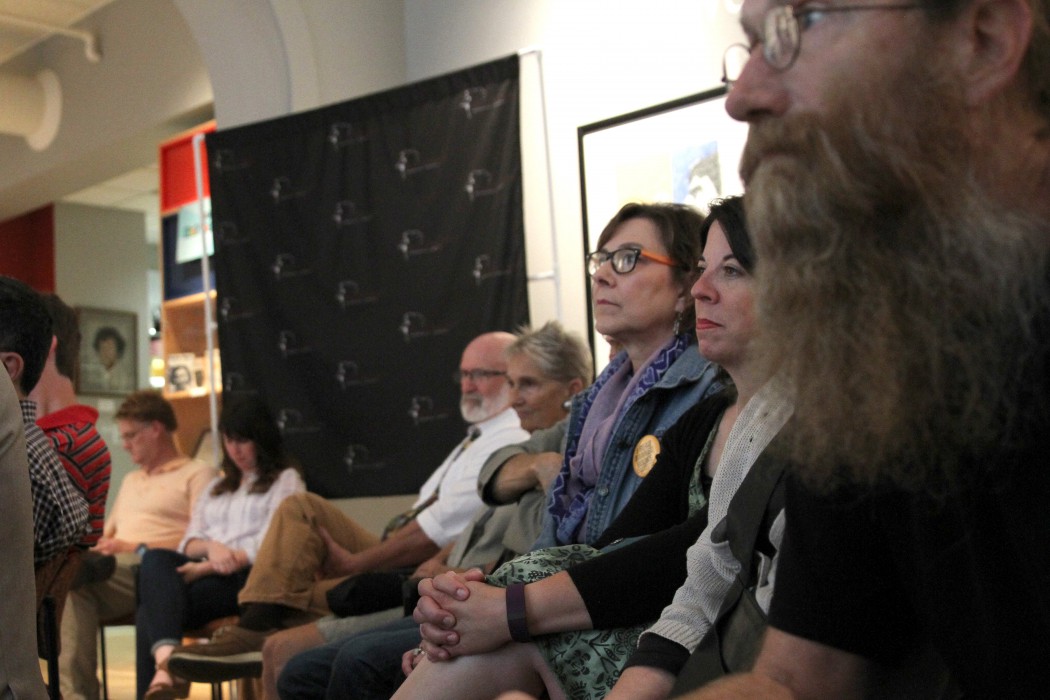 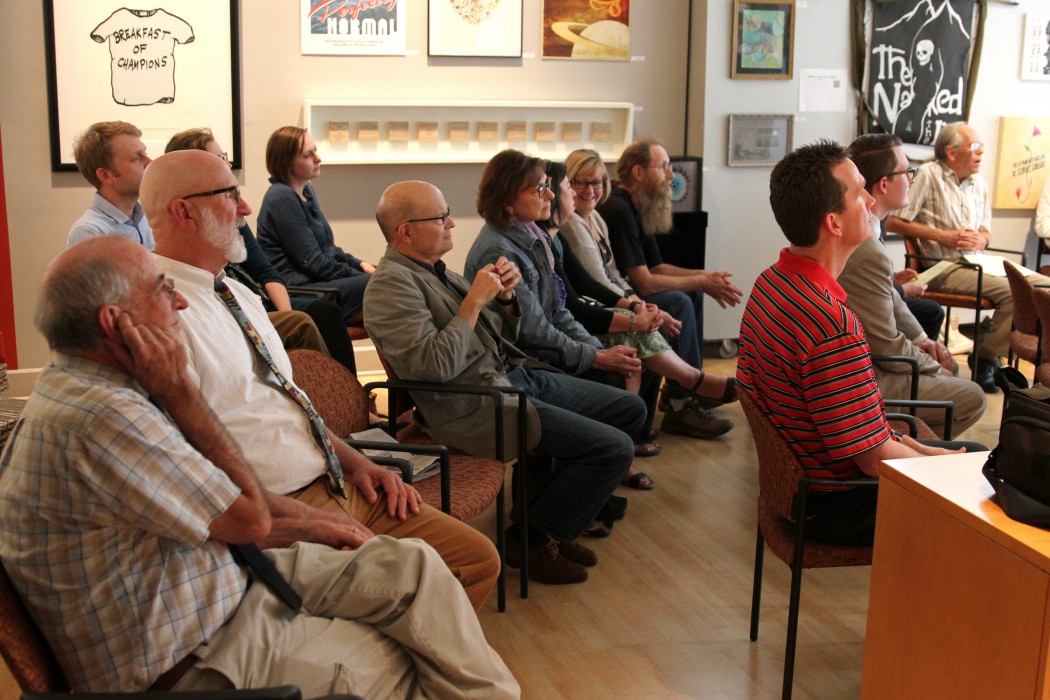 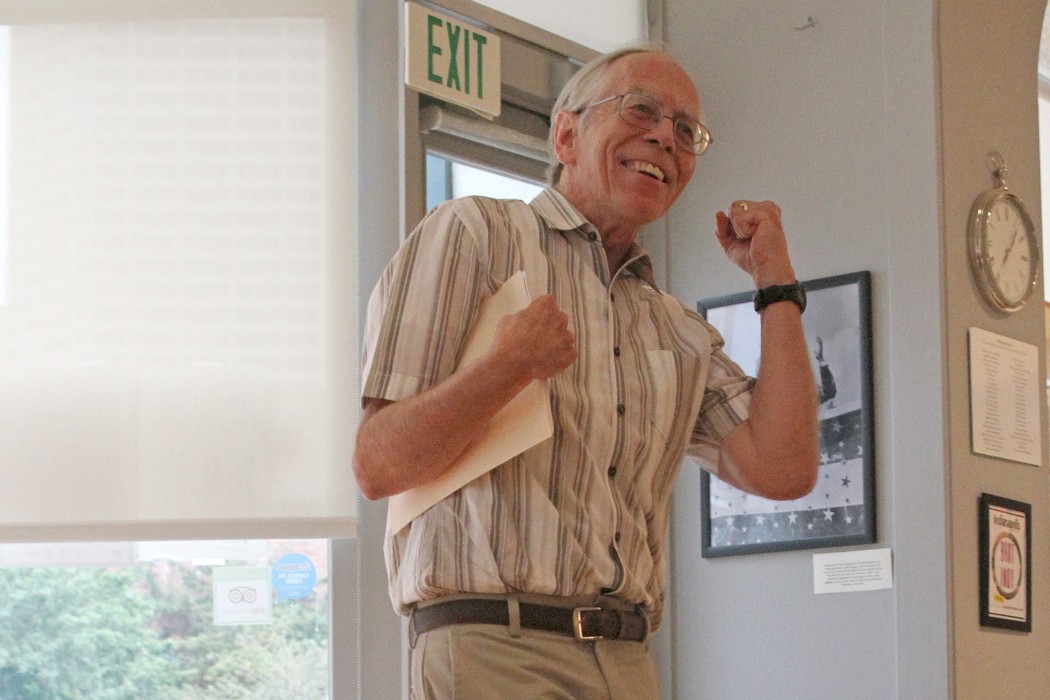 Hudson: "Vonnegut generates poetic comedy—the way he brings together the tragic and the comic is truly remarkable.“ 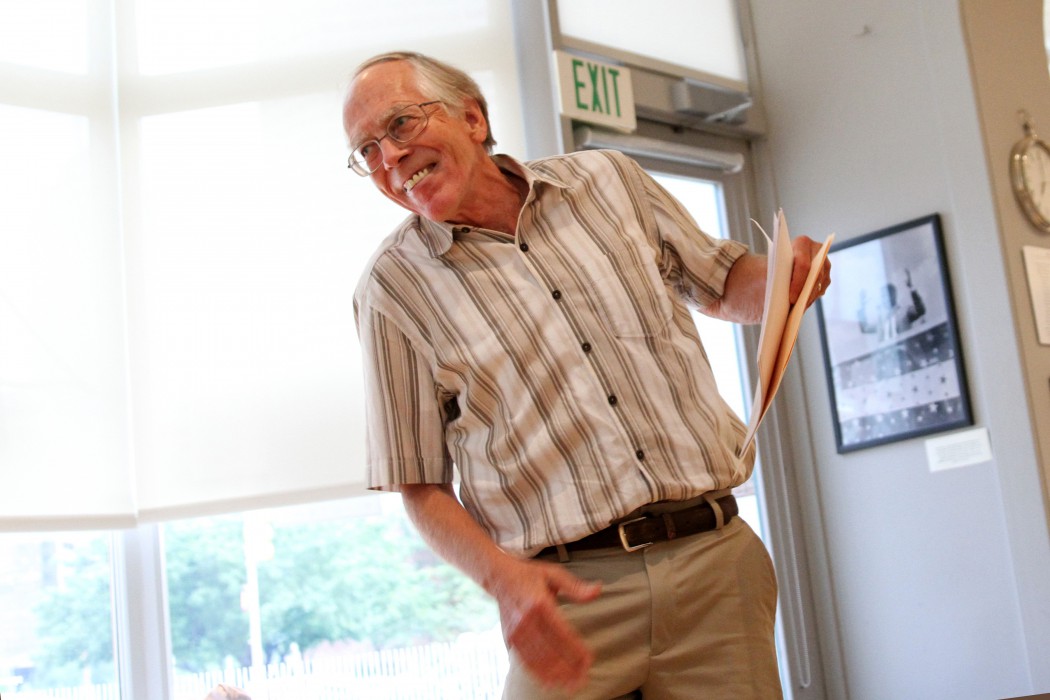 “There is a deathless energy in Vonnegut’s work.” 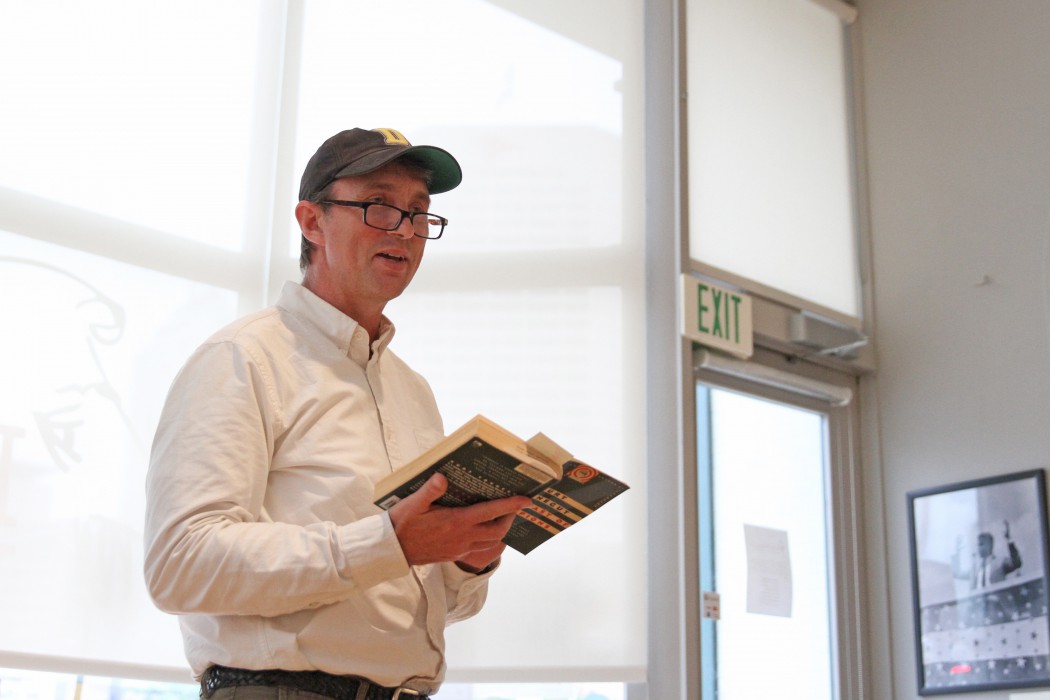 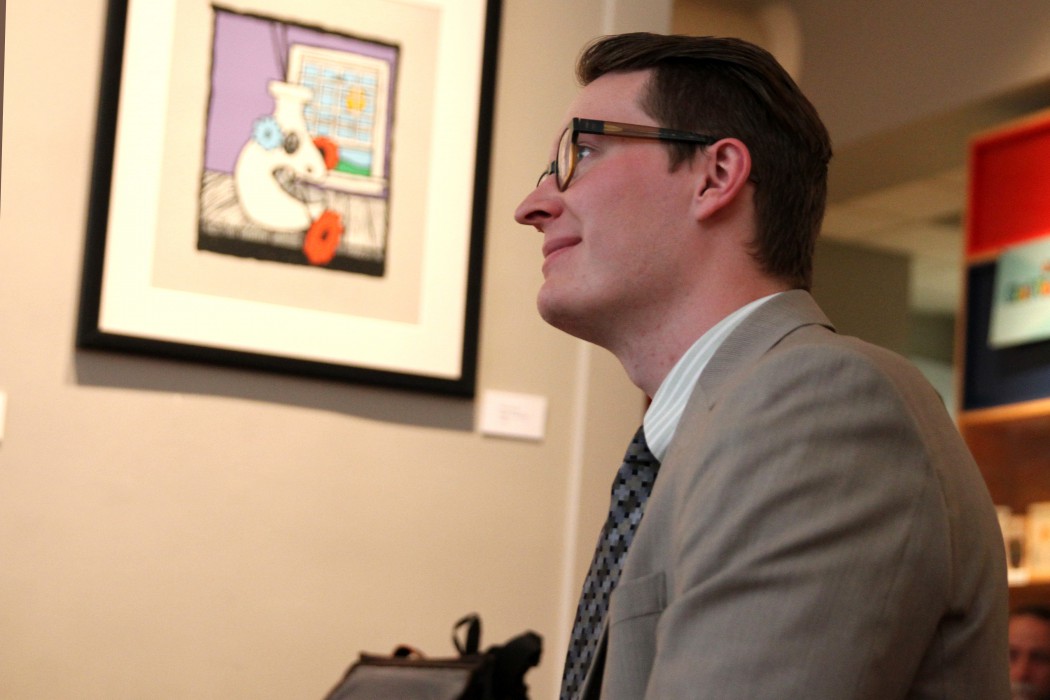 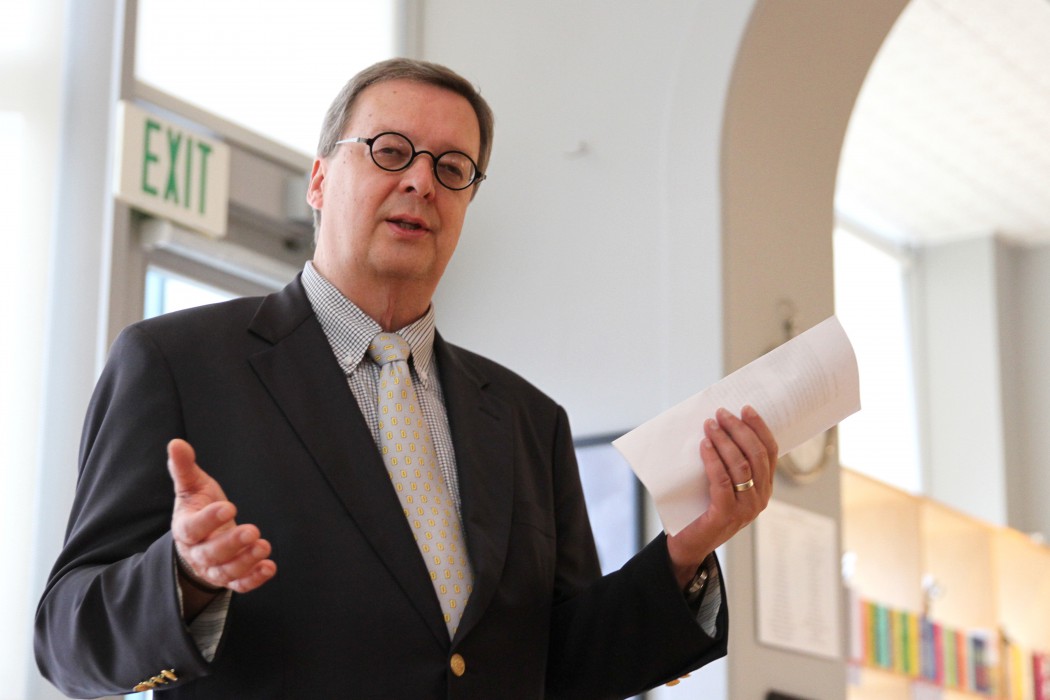 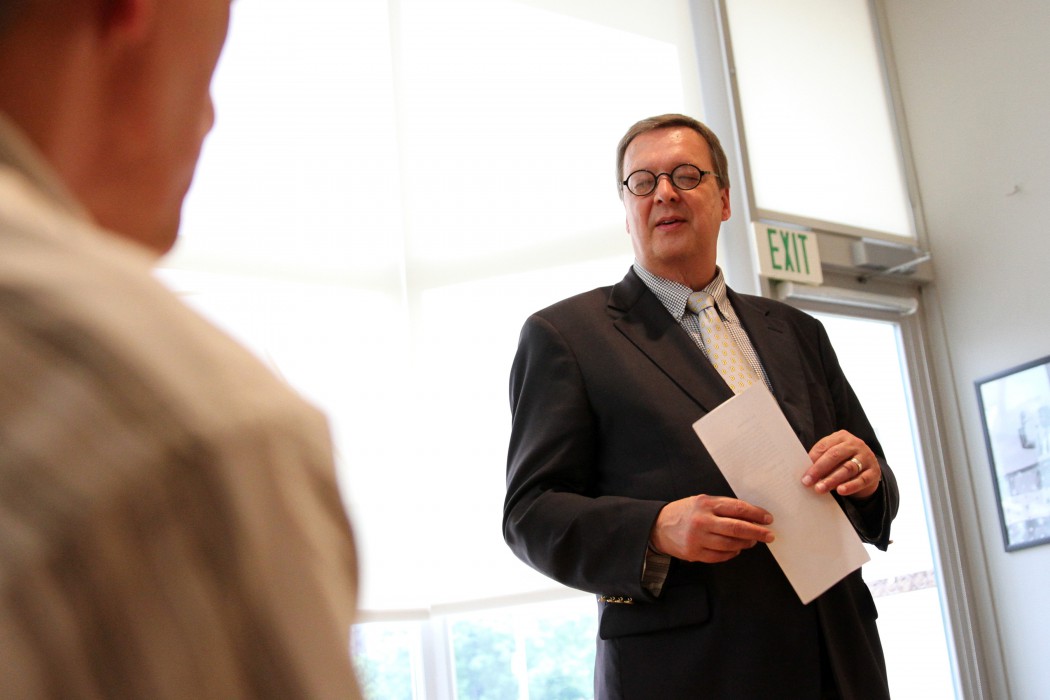 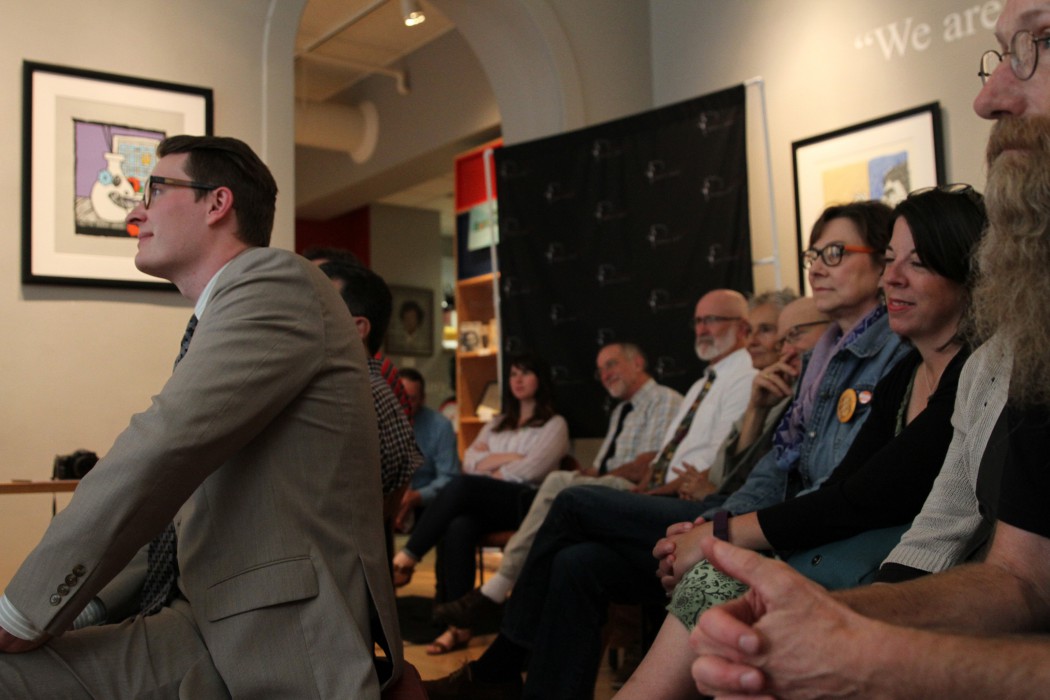 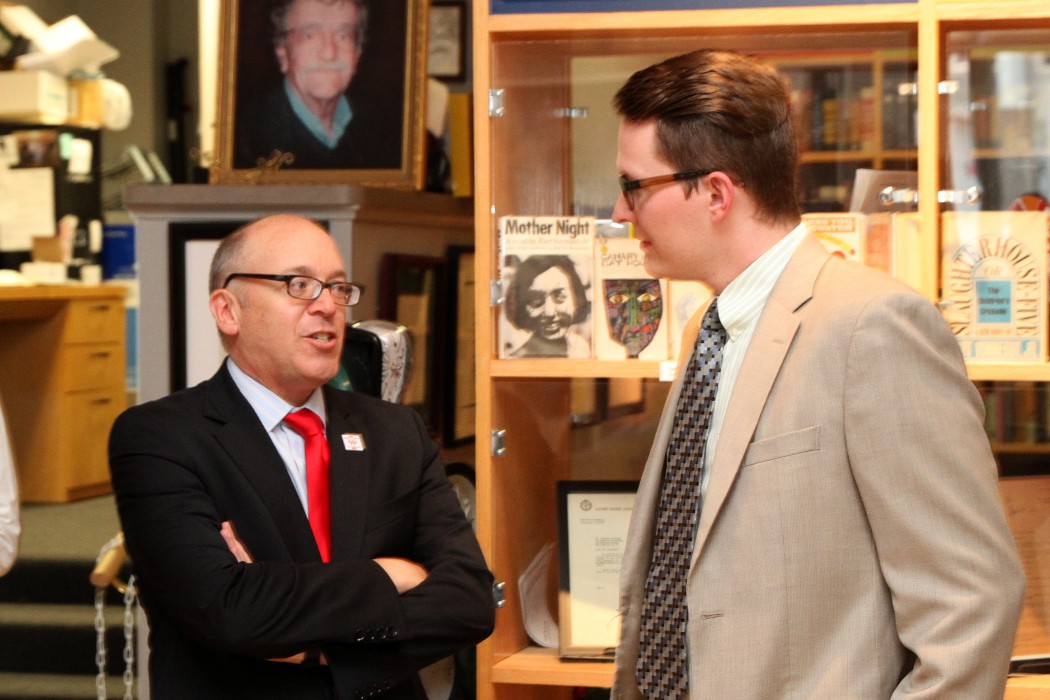 Hess talks with John Henry before the readings.

Celebrating the Right to Read

“Banning books is one of the most absurd of human pursuits,” poet and Wabash Professor Emeritus Marc Hudson said Monday during a Banned Books Week reading at Indianapolis’s Kurt Vonnegut Memorial Library.

The library honoring a writer who wove together the absurd and the poignant proved a fitting venue for a celebration of the freedom to read and led by Hudson, Wabash President Greg Hess, and poet and DePauw Professor Joe Heithaus.

The night meant even more if you knew the Wabash professor whose memorial service inspired the founding of the Vonnegut library. (More on that later.)

Standing next to a wall of once-banned books, DePauw Librarian Rick Provine introduced President Hess, an economist by training who admitted he “had never given a dramatic reading.”

But Hess proved true Wabash Professor Robert Petty’s liberal arts notion that scholars have much to offer “at the frayed borders between their own understanding and the unique knowledge of others.” He provided some of the evening’s most interesting stories and insight.

He read from a book that “left a lasting and powerful impression” on him: Ernest Hemingway’s The Sun Also Rises. Banned in Boston in 1930, burned by the Nazis in 1933, outlawed in Ireland in 1953, and banned from schools in San Jose and Riverside, CA, in 1960, it is #18 on the American Library Association’s banned classics list.

“What we find intolerable can turn 180 degrees,” Hess said, noting that The Sun Also Rise was criticized for its use of profanity and the decadence of its characters.

“It was banned for sex, language, and excessive drinking.” Hess smiled. “All things that it seems are practically required in a piece of literature today. “

As the audience laughed, Hess added, “but they let many things pass that we wouldn’t let through today.”

He read excerpts highlighting Hemingway’s famous prose, but also passages with anti-Semitic and racist overtones. Hess’ awareness of anti-Semitic language is heightened, he explained, by his own mixed religious heritage.

He recalled conversations he’d had with author Jamaica Kincaid about racism and anti-Semitism in Hemingway’s work: “There’s not language there that would get the book banned today, but language that brings more heat than light. It would certainly get conversations started.”

“There is a timeless piece of intolerance that we find in passages of classic literature,” Hess concluded. “But there are also passages that people find tolerable in one age, and intolerable the next.”

“Banning books is absurd, yes,” said Hudson. “But it’s also scary. That’s one of the reasons I love this guy Vonnegut. He was fearless. He could put the most tragic things forward with comedy, or the sense of the strange. He generates poetic comedy—the way he brings together the tragic and the comic is truly remarkable. “

Hudson read from Slaughterhouse Five, perhaps Vonnegut’s most influential work, set during the firebombing of Dresden, Germany, which the author had witnessed as a POW in World War II. The horror of that attack—which killed 250,000 people in 24 hours and destroyed the city—changed the writer’s own view the world.

“You can hear the survivor’s guilt,” Hudson said. “He was there—he survived. He was haunted by this experience, and he wants us to be haunted by it. That’s at the heart of his work: ‘I survived, I have to speak of this so it doesn’t happen again.

“There is a deathless energy in Vonnegut’s work.”

Joe Heithaus recalled reading Vonnegut’s Breakfast of Champions when he was in high school and uninterested in poetry or literature.

“I was not a reader, but that book showed us all kinds of ways to craft language,” the award-winning poet said. “That book was my entry into reading.”

The poets took turns reading their own works and poems from others—Hudson from Allen Ginsberg, Pablo Neruda, and Antonio Machado, and Heithaus from Marc Doty, Amiri Baraka, Roque Dalton, and Valzhyna Mortand.

Hudson’s 2008 poem merging his experience of his son Ian’s death with the tragedy of War in Iraq—“Helen’s Tears”—stunned the room into silence.

Library President Mark Lakshmanan concluded the event, speaking of how reading Vonnegut swayed his career path from history to healing.
It was the sort of evening of literature and laughter, reflection and remembrance, that Vonnegut Library founder Julia Whitehead had in mind when she envisioned the project in 2008. Her husband, J.T Whitehead ’87, had been a student of Wabash Professor of Philosophy and Religion Bill Placher ’70, and the couple attended the memorial service for Bill in Pioneer Chapel December 6, 2008.

“There were so many kind words about Placher, and he clearly touched so many lives in an extraordinary way. People of all ages loved him,” Julia recalled. “As I was rocking our youngest child to sleep that night, I thought of who I would want to hold such a memorial service for. And my mind went straight to Vonnegut.

“The next day, I Googled his son, Mark, in Massachusetts and said I had an idea for a nonprofit library in honor of his father. There was magic in the air at Wabash College on the night of Placher’s memorial service. I’m grateful I was there to be inspired. It changed the course of my life.”

And created a place to celebrate all the writers who, as Hudson observed, “shift our vision and transform the way we see the world, the wonder of it.”