Déjà Vu Along the Via Appia

Richard Paige — Even on his first trip to Rome, Tom Witkowski ’15 experienced more than a few déjà vu moments, courtesy of a video game.

Witkowski had been a regular player of Assassin’s Creed II, an immersive game of historical fiction, which served as his tour guide to Ancient Rome.

“All the things I learned and was familiar with in the game carry an impact when you see it first hand and get the full scope of what going on,” he said. “It goes both ways from the game to the real world and vice versa. The game allows for an interaction that being a tourist doesn’t always allow.”

He speaks of Rome with a deep connection that has lasted more than 10 years, dating back to four years of Latin at Walnut Hills High School in Cincinnati. A trip to Rome followed his high school graduation, which allowed him to walk on the Via Appia both literally and figuratively.

Witkowski says the games are surprisingly accurate. In addition to short histories and text, the buildings are nearly exactly to scale. He relayed a story of the Pantheon, featuring a fountain in an adjacent plaza that still exists. The only difference was a coffee shop in the plaza that didn’t make it into the game. 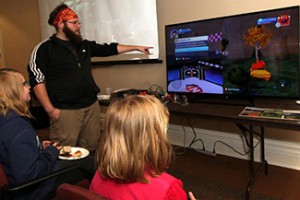 Tom Witkowski ’15 walks kids through a game he created at the inaugural Wabash Game Jam on April 27.

“It was wild, I’d seen it like this,” he said pointing to the video screen as he walked me through the game. “I’d played the game, climbed around, and done all the missions. Then you walk inside for real and it’s exactly the same. It was like walking back into the game. It was exactly what I’d already experienced.”

Such a revelation doesn’t surprise Professor Michael Abbott, whose class on game design and human values enthralled Witkowski and 19 other Wabash men this spring. Abbott agrees that the video game experience can help in the learning process by establishing deeper connections for some.

“There is something different in the experiential dimension,” Abbott said. “Actually traveling is so fundamentally different than traveling in a game that it’s a both/and thing; it affects the head and the heart. It was a richer experience for him.”

Rome stood out to Witkowski because of monuments like the Pantheon or Colosseum. He remembers reading of those places in textbooks, learning of the history and the architecture, but it was his gaming experience that brought it to life.

“You play a video game with those facts and you can visualize the things that were talked about in the books,” said the philosophy major who plans to teach English in Prague following graduation. “You fully experience this building in the game, you walk it, climb it. It’s a lot of reoccurring stimuli. You learn about that world because you are placed in it. You feel like you are flowing through history.”

Brett Douville, Presidential Fellow in Digital Arts and Human Values, who co-taught the class with Abbott, identified how gaming bridged the gap from entertainment to understanding.

“Those two things informed each other,” he said. “Things that were in the game that maybe hadn’t interested him before now did, like investigating the little bits of included history and text. He returned and was much more interested and he understood how they connected.”

The connection wasn’t lost on Witkowski. When asked about his impressions of the class, he responded with what could have been an appropriate description of his own experiences, saying, “It was interesting to look at the progression of games. First, it was entertainment, and now we can teach with them as well.”