(above) A model for the set of “Party People.” Doshi designed the set and lights for the play, “a hyperkinetic mix of live video, hip hop, jazz, rock, gospel, blues, Latin rhythms, and spoken word” developed and directed by Liesl Tommy. 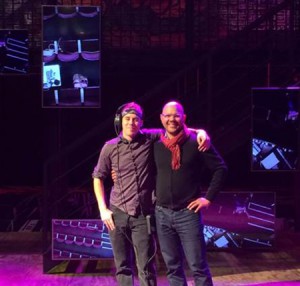 Hopper and Doshi on the set of “Party People.”

Brad Hopper ’14 is a fellow at Berkeley Repertory Theatre, where Marcus Doshi ’97 designed set and lights for the new musical.

Doshi says, “Imagine my delight when I saw him wearing a Wabash T-shirt to rehearsal.”

Brad was selected as a Berkeley Fellow last year. The program, sponsored by American Express, is one of the nation’s most esteemed and extensive, offering training in more than a dozen different disciplines. The partnership between Berkeley Rep and the fellowship recipient offers invaluable experience and professional contacts, easing the pathway to employment.

Brad is serving as the stage management fellow under the mentorship of Production Stage Manager Michael Suenkel.