On February 21, New York City-based composer Allen Schulz ’87 returned to Wabash to premiere a piece of music for Wally Tunes, the College’s Symposium on Music and the Liberal Arts. For the audience, it was an exciting finale to an afternoon of presentations. For Schulz it was a tribute to the teacher who had helped him find his calling.

“I had long wanted to write a work for my piano teacher from my student days here, Diane Norton,” Schulz says. “When I was at Wabash I was really running from music. It was only after Diane began giving me piano lessons that I began to finally see that this was something I might like to do.”

After graduating from Wabash, Schulz studied at Yale Divinity School for two years before realizing music was his vocation. 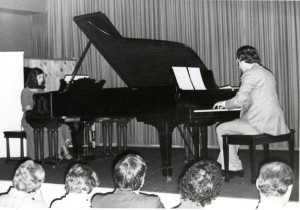 “Diane kept in touch through that entire time at Yale. She pushed me to listen to new music. I tended more toward Bach and wanted to play Chopin, but she gave me Stravinsky, she gave me Bartok. She had me listen to her husband Fred Enenbach’s music. That really made me start thinking—I started composing, and it stayed with me.”

Last fall when Schulz began work on his composition for this year’s Wally Tunes, he returned to the music of Enenbach, who had died in March 1984.

“I asked Diane if there was a section from a piece of music written by Fred that I might use as the centerpiece of my new work’s second movement. She sent me a vinyl album of a collection of Fred’s works. She told me to explore a particular piece of Fred’s called ‘Origins,’ where Fred had used an old American folk song called ‘Pretty Saro’ as his centerpiece.

“I don’t even own a turntable, so I took the album to a sound engineer and had him make digital copies. Then I sat and listened to Fred’s piece. It was beautiful. He used that old folksong without changing it at all. He had a female voice sing the original tune while he composed new and interesting sounds around it.

“The story of his piece seemed to me to be one of solitude and yearning for connection. This would be my piece’s story, too.

“And the second movement is about how Diane’s voice still calls me as a composer, even though I live in New York City and communicate with Diane only via email.”

But there was something missing in the piece.

“I had these two measures I didn’t know what to do with. So I went back to Fred’s music and found two chords that really spoke to me—a real counterpoint to what was going on. Completely unrelated. So I stole them, straight out!”

When Norton began practicing the Schulz composition, she recognized those chords immediately.

“They made my heart stop,” Norton says. “They were direct quotations from Fred’s work. Those two chords—the way Allen excerpted them directly—were extremely moving. “

Norton and cellist Kristen Strandberg premiered “Voices Past, Softly Speaking” for the Wally Tunes symposium the afternoon of February 21—the teacher playing work by her student inspired by her late husband. The piece hinges on those two chords, followed by the tune “Pretty Saro” played with restraint and yearning on the cello. A few quiet seconds after the last note sounded, the audience was on its feet applauding. Schulz stepped onto the Salter Hall stage, thanked Strandberg, and then hugged Norton, who smiled with the joy of a musician who had played well and the pride of a Wabash teacher whose student had done great things.

“She changed the way I thought about music,” Schulz says. “Her words as a teacher and her instruction as a fellow musician have remained with me. She is one of the most important music connections in my life.”