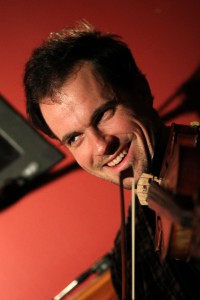 The whole room is moving, and not because of the Guinness I drank.

Can I Get an Amen is the closing act of Old Lazarus’ Harp, “a music collective of four rising forces on the Chicago folk scene,” and I’m sitting on the 100-year-old red oak floor of the Galway Arms Irish Pub on Chicago’s Near North Side photographing the band.

Feet stomp, knees wiggle, hands clap, heads bob. The mouths of young women hoot and sip craft beer. Shadows leap and slide across the honey-brown wainscoting and crimson walls while the 20- and 30-somethings standing in the doorway sway like ocean plants caught in the current.

The room is awash in music.

Chris Kimmons raises his Takamine acoustic guitar to his ear, throws his head back and roars out the chorus of “Sugar Hill,” one of three tunes in the group’s signature medley. Banjo player Evan McBrayer Collins matches his volume, while Eli Namay leans over his massive acoustic bass and thumps out the beat. 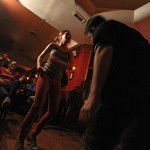 A long-legged woman in red jeans, spaghetti-strap top, and chestnut hair swept back into one of those claw things clog dances within two feet of my left thigh. The floor shakes when a guy jumps into the small space in front of the band to join the woman. He tries to catch her eye. No way. Dance all you want, but here the sex is in the music.

In the center of the band and driving it all, Dan Gillespie ’08 draws his bow across the strings of his violin with a grace that belies the whirlwind he is weaving. He’s wearing a plaid shirt and the scruffy beginnings of a beard and his brown hair is disheveled as during his college days, if a bit thinner. Music decrescendos as he improvises a haunting bridge between “Bonaparte’s Retreat” and “Soldier’s Joy,” his head cocked to the right, the fiddle nestled beneath his chin, his dark eyes staring ahead with the intense focus I remember from his senior recital at Wabash. He’s an accomplished musician now—one of the best old-time fiddlers in the city, the folk aficionado sitting behind me insists.

But Gillespie the performer seems as somber as I remember from his playing at Crawfordsville’s old Iron Gate.

He calls out the next tune in the form of a question, laughing when he realizes he’d almost played the wrong one. 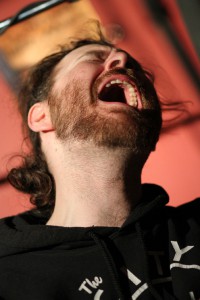 Then he sings, joining Kimmons and McBrayer and punching out the last line of the medley—“That’s a Soldier’s Joy”—as the audience stands and cheers.

And Dan Gillespie is exactly that—joyful. A restrained joy, sure. But miles from the frustrated Wabash art major who said in an interview for WM in 2008, “I’ve been in a state of conflict.” Accepted into programs at Rhode Island School of Design, The School of the
Art Institute of Chicago, and the Pennsylvania Academy of Fine Arts in Philadelphia, he couldn’t decide which way to go. He wasn’t even sure art was his calling.

And today he really does. But he’s surprised the joy is so obvious.

“I didn’t know I looked so happy when I played,” he emails after receiving some photos from that concert. “I always assumed I displayed a surly face.”

Not anymore. His senior recital as a music minor at Wabash was a harbinger of all this. He played the required classical pieces, but slipped a fiddle tune into the program. And he’s been playing fiddle ever since, either with Can I Get an Amen or with his other band, Coyote Riot, who describe their sound as “the twang of the rockabilly style guitar sitting nicely with the pluck of the bass and the chuck of the tenor banjo, while the harmonica and fiddle harmonize like crickets in heat.”

He’s been making fiddles, too. Violins, violas, even cellos. Gillespie attended the Chicago School of Violin Making and today spends his days repairing stringed instruments, nights playing music, and any available free time in the studio making violins. He sells everything he builds to top-end players.

“He’s got some decisions to make,” says Gillespie’s friend and Wabash mentor, Professor of Economics Kay Widdows. “To decide where to devote most of his time—to building or playing.”

He’s found his vocation, if not the exact way to practice it. Deep down he knew it even during those conflicted Wabash days when he told us, “Every-where I’ve lived I’ve been able to find people who enjoy playing music, and I’ve made my best friends when I’ve been around music people. It’s easy for me to connect with them. It lights me up.”

Earlier that evening at the Galway Arms I took a photo that didn’t quite turn out. Fiddle music was playing in a dimly lit room as a man approached a young woman. She turned to him, smiled, placed her left hand in his, and rested her right hand on his shoulder as he pulled her gently closer. They danced a slow waltz in that small space. It was the way she looked at him I wanted to capture but missed in the low light. It’s a gaze those of us lucky enough to receive never forget.

Looking at that photo I think of Gillespie’s recital at Wabash, when those fiddle tunes first entranced him, and his masterful playing in Chicago today. Which should he choose now—play fiddle or build violins? I don’t know.

But I know love when I see it. When-ever he tucks his fiddle beneath his chin and plays the way he did at the Galway Arms that night, Dan Gillespie is dancing.