Visiting a friend, I see a framed letter on his wall—not an unusual thing, for there are several framed letters there; but this letter is handwritten, whereas the others are typed, some on renowned letterhead. I lean in closer to the handwritten letter and see that it is signed by his father. I cannot make out the scrawl well, other than the salutation (“My Dear Son”), and I turn and ask my friend about it, and he tells me it is his father’s suicide note.

I HUNG IT THERE for many and complicated reasons, says my friend.

For one thing it’s the last missive I ever got from Dad, and for another it’s a real sweet note. He poured more of himself and his feelings into that note than he did in all the other letters I ever got from him combined.

Not that there were many letters from Dad. He wasn’t the kind of guy who wrote letters. Or said much about how he felt. Even his compliments were stern and gruff. But you knew he was inside there somewhere. When I was younger I was angry that he couldn’t or wouldn’t come out of himself, but when I got older I realized he was who he was and I ought to either appreciate that or leave him alone. I tried to appreciate it. We were never close but we got to be respectful with each other. That sounds cold but it was a lot better than the beginning. And he finally wrote down that he loved me and liked me and was proud of me and thought of me every day, he wrote that down, and it means the world to me.

I read that letter every day. It’s like a window for me or something. My mom died years ago and they never had any other kids so it was me and dad, and to have him finally say how he really felt, even in this context, it means the world to me. He was real old and real sick and he wanted to leave with a shred of dignity intact, so he did. But he left this letter for me. His lawyer delivered it by hand. Traveled all this  way to hand it to me. Remarkable. He said he suspected that my dad had something substantive to say and he didn’t feel he could trust a letter like that to the post.

For a while I kept the letter in a bible, said my friend, but after a while I wanted to see it every day, and protect it, and celebrate it, you know? Salute it or something. I know it seems weird to have your dad’s suicide note hanging on the wall but who’s to say what’s weird with anyone else’s complicated life, you know what I mean? To me it’s a love letter that took a real long time to arrive. I waited all my life for that letter. That’s the greatest letter I ever got, by far. Sure, you wish you didn’t have to wait your whole life for it, you wish it wasn’t necessary, you wish it wasn’t a big deal, but that’s the dad I had, and the fact that he finally sat down and wrote out how he felt in his soul, that means the world to me.

I know people who see it think the context is weird or sad or macabre but I guess I prefer to think of it as a terrific love letter. And every time I read it and cry I walk away thinking, Why the hell do we not say how we feel to the people we love, every day? Why the hell not? Why do we let ourselves get trapped inside the prison of our dignity? We ought to be speaking and mailing love letters all day every day, that’s what I think. I try to do that now, for which I have to thank my dad, you know?

I DO KNOW, I SAY,  and we turn away to other matters, but I went home that day and told my lovely bride that I loved her, and I told our sweet tumultuous daughter and our wild and surly and hilarious sons that I loved them, and they made jokes and were uncomfortable and slid off to pretend to do their homework, but when I told my lovely bride about that letter on the wall, she said it would be a prayer to tell you all about it, so I have.

—from A Man’s Life: An Ongoing Conversation About What it Means to be A Man in the 21st Century, WM Spring 2013 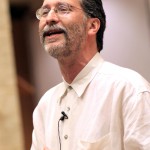 Brian Doyle was the College’s visiting writer this past winter and is the editor of  Portland, the magazine of the University of Portland. His most recent books are the novel  Mink River, the short story collection  Osama bin Laden’s Bald Spot & Other Stories, and  Grace Notes, a book of essays.