I suspect one of the reasons I became a fiction writer was because I couldn’t sing.

Of course, it’s not only singing. There are many things I can’t do.

Even though over the course of my life I’ve enjoyed participating in many different sports, the phenomenon of the fundamentally sound golf swing mystifies and eludes me. My sense of direction is awful to the point of being absurd. Armed with a hammer, saw, wrench, or screwdriver, I’m a danger to myself and others. As for drawing and painting, I’ve demonstrated no significant improvement since elementary school.

My inability to sing, though, is different. I don’t care about becoming a scratch golfer or navigating the world without GPS. I have no aspirations involving do-it-yourself home repair, no interest in investing in a palette and easel. I always have and still do wish I could sing, though.

Even if only a little.

It’s a profound disappointment to me that I can’t. Sometimes I’ll listen to, say, Van Morrison or Johnny Cash or Ryan Adams or Bruce Springsteen or Gordon Lightfoot or even Ronnie James Dio, and in addition to the admiration and catharsis, there will be something else I feel, something selfish I’d locate somewhere between wistfulness and envy. It’s not that I want to be these men. This isn’t about hero worship or fandom. I’m a 44-year-old man. If I were given the opportunity, though, my inability to sing is one of the first things I would change about myself. Even before wishing myself taller or thinner. Even before—I hate to admit this—wishing myself braver or wiser.

From what I’ve heard from other nonsingers, the way in which I came to realize my inability is not unique. It would seem that junior high music class is often the setting for this revelation.

In the middle of my seventh-grade year, my classmates and I were preparing for our winter concert. This wasn’t an extracurricular activity, but part of our regular music class. Mandatory participation. While some of my classmates grumbled, I was completely invested in the production. I enjoyed music class in much the same way I enjoyed gym class and soccer practice. My senses were engaged, my body awake. I welcomed any kind of break from the sleepy dullness that haunted me most of the school day.

After our final rehearsal, the music teacher, Mrs. Graff, a quirky but kind woman who was closing in fast on retirement, asked my friend Scott and me to stay after class. When the room cleared, she turned to Scott and gently but straightforwardly told him he needed to sing more quietly. “Think of it like this,” she said, and smiled as she raised a cupped hand over her head. “Right now you’re singing up here with the other voices. Sometimes even above them.” She dropped her hand to waist level. “I’d like you to be down here. Underneath the other voices. Quietly supporting them. Could you do that?”

I felt sympathy for both of them. I knew Scott was embarrassed, and I knew Mrs. Graff didn’t want him to be, but I understood she was telling him something he needed to hear. It was for his own good. He was a cool guy and our class’s undisputed arm-wrestling champion, but he was an awful singer. I knew this to be true because we stood next to each other in rehearsals. He’d been honking mangled holiday songs in my ear since before Thanksgiving. The only way I’d been able to combat his voice was to turn up my own volume. So I understood Mrs. Graff was doing what was necessary to save the poor kid from himself. What I didn’t understand was why I was standing there.

“As for you, Tom, I’d like you to take on a special role for the program,” Mrs. Graff said. She always wore two pairs of glasses on chains around her neck, and she’d often switch back and forth between them. At the moment, she wasn’t wearing either.

“Sure,” I said, glancing at Scott. I imagined this would be hard for him to hear. “What is it?”

“I’d like you to be the concert narrator. Before each song, you’ll announce the title and composer to the audience. Maybe say a few things about the song’s origins and history. I’ll type up something, maybe even have a joke or two for you. Let’s see what I can come up with.”

“So we’ll tape off a seat for you in the first row. Your microphone will be set up front and center, and between songs you’ll pop up and do your thing.”

“I won’t be singing with everybody?” I said.

“I’ll be the narrator if Tom doesn’t want to do it, Mrs. Graff,” Scott said.

“No,” Mrs. Graff said, “when I got this narrator idea, I was thinking specifically of Tom.” She sat down on her piano bench and started to gather her sheet music. “You onboard, Tom?”

Once we were in the hallway, Scott stopped me with a punch in the arm. “Lucky,” he said. When I slugged him back as hard as I could, he chuckled. “That all you got?” he asked.

Later that week on the drive home after the concert, my mom and dad—neither of whom could carry a tune—told me my narration had made the whole show. The information I’d conveyed provided interesting context, they said, and they told me they were proud of me for my clear enunciation, for how sharp and grown-up I looked in my new sport coat.

I suspect one of the reasons I became a fiction writer was because I couldn’t sing. The novelist Joseph Conrad talks about how the only way the fiction writer can connect with the reader’s heart is via the body, via the senses. If the writer wants to reach the reader’s “secret spring of responsive emotions,” Conrad writes, the writer “must strenuously aspire to the plasticity of sculpture, to the colour of painting, and to the magic suggestiveness of music—which is the art of arts.”

So what I do is at least akin to what a singer does, I think. We are both out to win the ears of our respective audiences. But still. While I know firsthand and profess faith in the power of fiction to move people and offer modes of experience and discovery not otherwise available, I also know, deep down, that there’s something supremely visceral and immediate and resonant about a song well sung that can’t be beat.

When I saw my wife for the first time she was onstage, a lead singer for a band called The Uninvited. There’s some disagreement between us about what was included on the set list that night, but we both definitely remember a cover of The Pretenders’ “Middle of the Road.” I recall being surprised by her Chrissie Hynde– like rich, low voice, and, as is often the case when I hear live music, wishing the guitars and drums would take it down a notch so I could better hear the vocals. I wasn’t thinking of her as a potential girlfriend, let alone a life partner. If I recall correctly, I was dating someone, and, besides, I’d been told that The Uninvited’s sultry singer was romantically linked to the band’s impressively mulleted lead guitarist.

But when we got together a year or so later, her singing, specifically my memory of her strong, smooth voice that night I’d seen her in concert, was right up there with the things that initially excited and impressed me about her. Of course, if she hadn’t been a singer, I’d like to think that it’s just as likely we would’ve ended up together, but who knows? At any rate, the idea of being with someone who could do so well and seemingly so effortlessly something I always wished I could do was satisfying. I still couldn’t sing, but being with and growing to love someone who could was, in a sense, the next best thing.

Twenty-five years later, my wife and I have two kids, a teenaged girl and a three-year-old boy. The girl inherited her mother’s singing gene. She’s been in school and church choirs since she was little, and she’s regularly given solos. Her current choir director is impressed by the range and versatility of her voice—she’s just as comfortable as a soprano as she is an alto—and recently she’s performed with the local opera company.

On top of all this, she’s starting to take the guitar seriously and writing her own songs. It’s exciting, and I’m proud of her. The other night she was upstairs in her bedroom wailing out Amy Winehouse’s song “Rehab.” I turned down the TV to listen. I thought my heart was going to explode.

As for my son, the jury’s still out. He’s lagging a bit in terms of speech acquisition, but everyone tells us not to worry. Of course, I hope that once he’s mastered talking, it will turn out that he can sing like his sister and mother. If he can’t, though, I’ll be ready to commiserate, and, when the time is right, teach him what I know about how to get by. 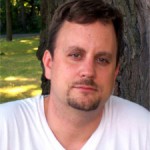 Tom Noyes’ third fiction collection, Come by Here: A Novella and Stories, won the 2014 Autumn House Prize in Fiction, and his stories have appeared in many literary journals. He teaches creative writing at Penn State Erie, The Behrend College, where he also serves
as contributing editor for the literary journal Lake Effect. Noyes visited the Wabash campus in Spring 2014 for a reading and to work with students in the Creative Writing Track.