The Banjo and the Blues

One of the most respected bluesmen in the Midwest, Gordon Bonham ’80 learned from some of the masters of the genre.

“I grew up in Hammond, IN, so after I graduated from Wabash I would go to downtown Chicago as often as I could,” Bonham says.

“It was one thing to hear the blues on records, another to get to sit in the front row and hear someone like Otis Rush give you the real thing.”

Bonham’s own career took off years later, when he moved to Bloomington, IN.“I went down for the weekend and ended up staying for about 16 years. In three days I had a band, and in two weeks we were opening for John Lee Hooker. I don’t think I’ve had a night off since.”

Bonham’s playing attracted the attention of mandolin player Yank Rachell, and Bonham played with the Indiana blues legend for many years. Through Rachell, Bonham met Chicago blues pianist Jimmy Walker and played in front of tens of thousands of people at the Chicago Blues Festival.“Jimmy was one of those guys who got on stage and just started playing. He didn’t tell me the song, the key, the feel—you just had to figure out what he was doing and jump in. That was a real education, and I’ve approached music that way ever since.”

That includes Bonham’s current project funded by a grant from the Indiana Arts Council—studying the 5-string banjo and bringing it kicking and screaming into the blues:

A couple years ago Indiana Poet Laureate Norbert Krapf  wanted to learn to play Delta blues on the guitar to add a new direction to his career. He got a grant from the Indiana Arts Council to do it, took lessons from me, and did real well. We’ve done a few gigs together with me playing as he reads his poetry.

One day Norbert said, “Gordon, you should get one of these grants.”

I had been interested in the banjo since I first heard a guy play clawhammer style back in the 1970s. I’ve always been intrigued by the sound. So I thought, Why not write a grant to learn more about and play the banjo?

And my proposal was a question I’d often wondered about: If the banjo came over from Africa and was the most popular instrument in America in the 19th century, why didn’t the blues—which appeared in the late 19th century and early 20th century and was created by African-American musicians—have any banjo in it? Why didn’t Charlie Patton, Son House, and Robert Johnson play the banjo? 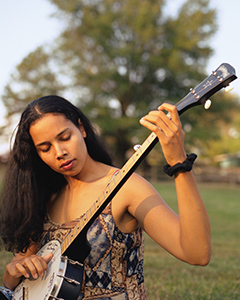 The first thing I did after I got the grant was to travel to the Madison Folk Festival to meet with members of the Grammy-winning group Carolina Chocolate Drops, four African-American musicians from North Carolina who play old-time string music, blues, and even some Irish ballads on fiddle, banjo, and guitar. I walked into their trailer and asked them, “Who plays blues on the banjo?” They all looked at me like I was out of my mind. Rhiannon Giddens (left) picked up her banjo and started to play a song that she said was “kind of like the blues.”

But did they know anyone who played Delta blues on the banjo? They couldn’t think of anyone.

After more than a year working on this, I’m not sure I have definitive answers, but I’ve got some ideas as to why you don’t hear the blues on the banjo.

The most unfortunate reason is that the banjo was connected to racial stereotypes. In the 1820s, minstrel shows began. White actors blackened their faces and portrayed slaves in comedy skits, often including shameful racially based jokes. This tradition took the country by storm—by the 1830s, every circus and medicine show had a minstrel act. They were even inserted between acts of plays. 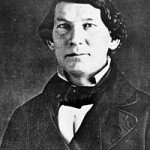 Claiming he had learned from a slave in Virginia how to play the banjo, Joel Walker Sweeney added the instrument to his act. Pretty soon every minstrel act had to have a banjo player, and these skits portrayed slaves as clowns and buffoons. I’m sure the stigma carried over into the way African Americans felt about the instrument.

If you’d asked Charlie Patton, one of the first blues players of the 20th century, why he didn’t play the banjo, he wouldn’t have said, “Because they used the banjo to make fun of me.” All this had happened 50 years earlier.

But because of the stigma, banjos weren’t in his community, weren’t being played, at least in areas where these early blues players lived.And the banjo was seen as a happy instrument—the instrument of a clown.

In the 1940s, when Earl Scruggs blew the lid off the banjo world with his three-finger style, Uncle Dave Macon, a banjo player from more of the “happy” tradition was asked, “What do you think of this Earl Scruggs?” Uncle Dave replied, “He’s not even funny!”Happy wasn’t what the blues guys were feeling when they were developing this style of personally expressive music. 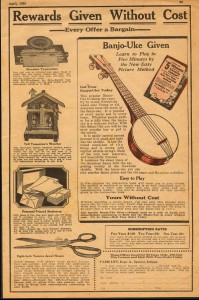 At the time the blues was beginning, banjos were expensive. As they became more and more ornate, the prices went up. In the 1890s a banjo could cost between $100 and $200, while you could pick up an acoustic guitar for $10 at Woolworth’s. So that’s another reason we don’t hear blues on the banjo.

The third reason we don’t hear blues on the banjo has to do with the very nature of the instrument. As I’ve listened to old blues songs and tried to come up with ways to play, I’ve found that the banjo doesn’t create some of the sounds we’ve come to expect when we think of acoustic blues. Most people expect a hard-driving bass rhythm, often played with the thumb, to accompany either vocals or slide playing on the other strings. But the banjo has a fifth string played with the thumb that’s higher than the rest that gives the banjo its characteristic sound.And the blues tends to have long, drawn-out sustaining notes. The banjo has a plunky, non-sustaining tone.

Still, I believe the banjo deserves to be an instrument of the blues. Even its history could be a blues song! It is a soulful instrument whose sound can be haunting one moment, joyful the next. The tone may not be what blues listeners are used to, but that difference breathes new life into old songs. It frees me to play them—and others to hear them—in new ways.

Songs from Muddy Waters’ “Can’t Be Satisfied” to Blind Willie Johnson’s “Soul of a Man” sound good to me on the banjo.One of my goals from this grant is to show up to work some night and just play the banjo all night. Right now I could do about 10 songs, but I’d like to be able to walk in with the banjo and do my thing.I think it just might work.

Watch Bonham plays blues on the banjo and resonator guitar

Edited from “Where Blue Meets the Banjo,” presented at Wally Tunes, the fifth annual Alumni, Faculty, and Staff Symposium at Wabash. Bonham’s primary source was That Half Barbaric Twang: The Banjo in America and Popular Culture by Karen Linn.