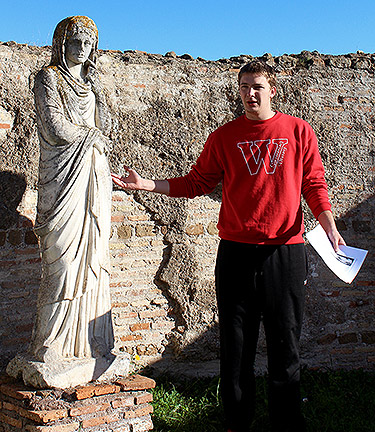 Nick Gwinn ’17 – Our trip to Ostia was one of my favorite parts of the trip because the ruins were so open to walk through and explore compared to other places on this trip. The ability for us to explore the ancient port city really put the way cities laid out and how the Romans lived in perspective. Seeing the buildings such as the fullery, the bar and the theater with the portico behind it allowed us to imagine how some of the hang out spots in Rome may have looked like but on a smaller scale. For example, I imagined the theater in Ostia was a lot like the Theater of Pompey because of the permanent stone theater and the portico behind it.

Another thing that I thought was extremely cool was the road to actually get into Ostia was the actual road from Roman times. We saw so many times in Rome that buildings were built on top of each other, but these roads were the real ones and the fact we could still see the wheel ruts from the thousands of carts that carried various materials and supplies was simply fascinating.