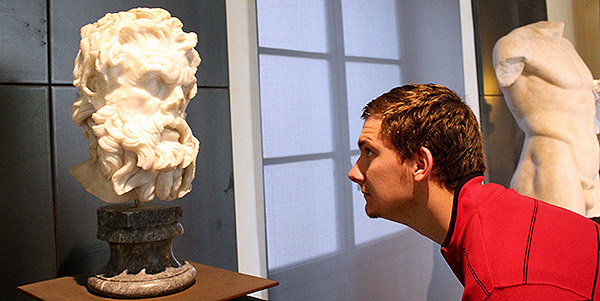 Boyd Hayley ’17 –  First, I would like to thank anyone who made this trip possible for me, including my parents and the staff at Wabash College. It was  an amazing trip. Today specifically we started out by going to the column of Trajan and doing some in depth analysis of the different panels as it went up. In class we talked about the location and it was very interesting to see the actual monument and not just see it in a book. Seeing the column of Trajan was important for me because later in the day I presented on the column of Marcus Aurelius which as I learned in my readings has very specific ties to the column of Trajan.

Later in the day we headed up to the campus martius to see the Horologium, ara pacis, and I got to give my presentation on the column of Marcus Aurelius. Actually going to the campus martius was so eye opening because in my classical Roman classes I always end up either writing a paper or giving a presentation on something in the campus martius. To see how all the monuments fit together and the ideas that they bring up is something you can only do in Rome, I don’t think I would understand them as well as I do now if I hadn’t have been able to go on this trip. It was a good first trip outside of the United States and truly an experience I will not soon forget.

Nolan Fenwick ’17 – On Thursday our group went on top of the Capitoline Hill to go inside and look at the ancient artifacts that were at the Capitoline Museum.  Inside we saw many works of Roman art, including the colossus of Constantine.  The utter size of this monument was truly mesmerizing and thinking about all it would have taken to create such a behemoth is rather awesome.  Across from that were the reliefs from the Hadrianeum, each relief representing a different province that was located within the Roman world.  It was educational to witness how many Romans pictured the different regions of Rome and how they were understood as a culture to the rest of society.

The Equestrian Statue of Marcus Aurelius stood glinting inside, with just enough gold left on it to show its power.  It was very large and foreboding to be underneath of it.  The statue stood as a symbol of strength and power and it was easy to see why it was seen this way.  The Statue of Commodus portrayed as Hercules was very cool.  It was so well preserved that the marble still shined bright.  The amount of detail that was included was truly staggering.  Afterwards a large portion of us decided to attend the Lazio vs Dnipro soccer match.  It was the first professional soccer match for many of us and was considered to be a cool experience.  The crowd was small though because the Lazio fans are upset with the president of the club and were boycotting attending the match.  All in all it was another very exciting day in Rome.