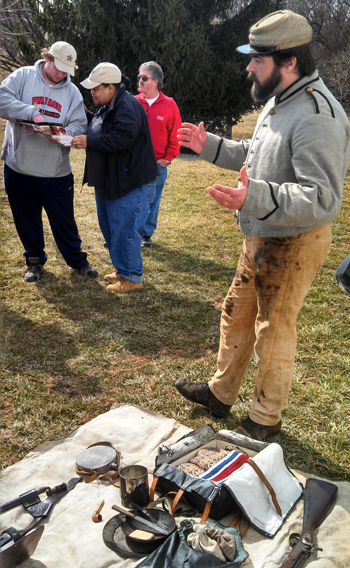 Ryne Ruddock ’15 & Andrew Sunde ’16 –  The sunbeams lit through the window and provided a confident feeling for the day. The troops awoke at 7 a.m., ate breakfast, and loaded up in the vans to explore the fascinating battlefield at Antietam Creek, Maryland.

After arriving at 9 a.m. the students were warmly greeted by John Hoptak, a tour guide at Antietam National Battlefield. Hoptak spoke for 20 minutes, spilling his knowledge of the battle and enlightening the students about every intricate detail encompassed in the battle. Hoptak discussed the misfortunes the Confederates faced. Stonewall Jackson and his army had to bring his men from Harper’s Ferry and defend the north flank Union General McClellan. Robert E. Lee defended the south, holding Brigadier General Ambrose Burnside on the other side of Antietam Creek. Ultimately the Union took the battlefield. Hoptak noted that Antietam was an important battle not only because it was the single bloodiest day in American history, over 23,000 wounded or deaths, but because it was General Lee’s intention to move the Civil War from the south and fight on northern soil. The Union victory at Antietam Creek was the lift President Lincoln needed to sign and announce the Emancipation Proclamation.

After Hoptak presented the events in the battle, the class went out to the different sites of the battlefield and observed up close what conditions the soldiers were pitted against. After visiting the hospitals and farm houses the soldiers commandeered during the battle, the class returned to the headquarters at the park and prepared to leave. Loading into the vans around one o’clock, food was the next thing on the agenda.

The long day at Antietam National Park had students craving some down home cooking. After eating in a small diner, filled with delicious home cooked meals, the students loaded back up in the vans and ventured to West Virginia to the historic Harper’s Ferry.

The small town located on the peninsula where the Potomac River and Shenandoah River merge and simply become a larger Potomac River. Harper’s Ferry was an important town. John Brown led his attack on slavery, where he was captured and later hanged for his radical actions. Harper’s Ferry was also the largest Federal surrender in the Civil War, as Stonewall Jackson decimated the Federals defending the town. Harper’s Ferry also started one of the earliest integrated schools to educate former slaves, Storer College. The school was finally closed in 1955.

The weather was absolutely perfect for walking and seeing all of the sites the sites had to offer. The long day took its toll on the students, however. Upon returning to the hotel to clean up and get dinner, many students went straight to bed, resting up for the long day ahead at Gettysburg.