A Class Still Being Perfected

Richard Paige — The sounds of a driving rhythm hit me at the door as I entered the classroom in Center Hall 215.

“What is this?” asked a student upon taking his seat.

“It’s a Ukrainian rapper I discovered four minutes ago on the internet,” said Mollie Ables, visiting assistant professor of music.

Such occurrences were common as Ables and Associate Professor of Political Science Ethan Hollander work through co-teaching a new class, “The Music of Politics and the Politics of Music.” The course examines the links between music and politics and the impacts both have on society and the individuals who listen. 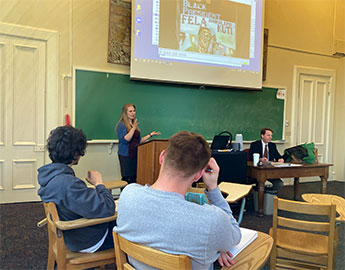 As the music faded and Hollander opened the day’s lecture—the words colonization and neo-colonization looming on the screen above his head—a discussion started on how colonization remains the defining characteristic of politics in Africa in the 1800s. Religion, nationalism, and imperialism are brought to the forefront.

Hollander talks of legacies and puppet regimes before Ables brings the class to an active listening session that features the music of Fela Kuti, the Nigerian musician and political activist.

Ables guides students as they talk of texture, instrumentation, rhythm, and meter. Then the focus turns to Afrobeats, the genre most directly linked to Kuti, and its connections to jazz. Examples of genres like Highlife are introduced before Ables closed the session with a snippet of James Brown’s legendary cut, “Funky Drummer,” and its place along this musical lineage.

“We had a fundamentals week right at the beginning to establish our vocabulary,” said Ables. “We introduced active listening because talking about music is hard. We had to learn the basic concepts of each discipline together.”

Students and professors are making unique discoveries at each class meeting. Subject matter changed on the fly.

“We left a lot to be determined,” explained Ables. “Nearly every day we had to ask what did we cover? There were so many unknowns. So much got left on the cutting room floor.”

Energy was high as students made final presentations discussing the history, lyrics, and impacts of nations’ national anthems on its citizens.

“It is actually been a really cool class,” said Davionne Garrett ’22. “You get to see these connections made between two different fields that you had no idea overlapped in so many ways.”

Those are the types of connections both Ables and Hollander were hoping for, even though that made the teaching slightly more challenging. On some days, the syllabus was more suggestion than road map, allowing for the class to blaze a new trail.

“I had to do more calculating in the moment,” Hollander said. “You are accountable to the students and your co-teacher, and that is a bigger challenge. But I’m better for it and I’m more certain I couldn’t do it alone.”

Garrett said the imperfections made for a more enjoyable experience.

“I like this class because it leaves a lot of wiggle room,” Garrett concluded. “It’s like we are the pioneers for a class that is still being perfected.”