I’m the newest member of the communications and marketing team at Wabash College. I run the social media — Facebook, Instagram, Twitter, and Tiktok. In my short time here, I’ve been to various campus events, but haven’t really had many interactions with students at the College. On February 28, that changed when I found out I would be traveling with the basketball team to Atlanta, Georgia, for the first round of the NCAA DIII Tournament.

I graduated from Indiana University 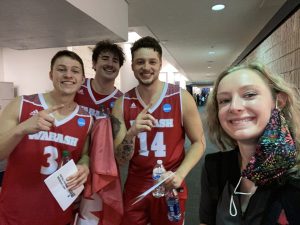 where I majored in sports media production. I was a photographer at the Indiana Daily Student newspaper. My beat was men’s basketball for two years. Then I was an intern for IU Athletics Cuban Center. With my intense love for the sport, when the opportunity presented itself to join Wabash’s team, I was very eager to say yes.

While traveling with the team I got to be involved in every aspect of their trips — riding the bus, watching practice, walk-throughs, their study tables, and meals. I would say “hi” or “good morning” as they got on the bus to get them to be more comfortable with me.

I could write pages about these players.

I remember thinking Kellen Schreiber ’22 is a powerhouse on the court. I assumed that was his whole personality, but he’s completely different with his younger fans after the games. Just seeing him with them made my heart melt. I found out he wants to go into education. He’ll be great in the classroom. 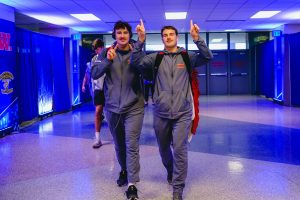 I remember the whole bus bursting out in laughter after Ahmoni Jones ’23 “accidentally” spilled ice-cold water on assistant basketball coach Matthew Richter’s head while he wasn’t paying attention. Then he got teased about it for the next two days.

I think my favorite moment was on our way to Fort Wayne for the semifinal game we stopped at Manchester University for a quick practice and walk-through. Being with the team for two weeks, they picked up on some things that annoy me about taking photos in so many different gyms. While I was walking around the latest facility, Turner Royal ’24 joked, “How’s the lighting in the gym?” That quick question before he returned to shooting made me smile because the gym was dark and yellow, not ideal conditions for good photos. That he noticed and took the time to ask me made me feel like I was a part of the team.

Coach Kyle Brumett is the definition of a coach. He is a mentor, a father, and a friend. He throws 100% of his heart into his team. There were only a few times where at least one of his sons wasn’t around. I could really see the love between a dad and his sons, but also the players and his sons. Mason Naaman ’24 and Champ ’24 and Styles ’25 McCorkle were the best big brothers to Brumett’s youngest son and liked to mess with him about how much he loves blue Gatorade. Even Jack Davidson ’22 took on the big brother role and snitched on Monte to Coach Brum for only eating a slice of garlic bread for dinner.

In my three weeks with the team, I 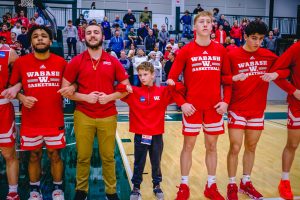 also got to know the coaches and see how much work they put into the program and players. I watched the never-ending teasing between associate head basketball coach Pat Sullivan and the players. I was so happy when Coach Sully mimicked me while I was talking because that meant I was officially a part of the group.

The whole day leading up to the semifinals against Elmhurst University, I was so anxious and had all these different feelings in my stomach that I was trying to hide because I needed to act like a professional. I realized this feeling was at every game of the tournament but was growing stronger because I cared about the team so much.

This team cares so much for each other, I am happy I got to experience the journey to the final four with them. They are the sweetest, kindest, most respectable gentlemen I’ve met in a long time.

‘Don’t miss out on a big opportunity’