Richard Paige — Confirmed to serve as a judge on the U.S. District Court for the Northern District of Indiana, Damon R. Leichty ’94 endured quite a wait in his elevation to the bench.

Leichty was nominated for the position by President Donald Trump in July 2018. His senate confirmation – by an 85-10 vote – came nearly a year later. Such appointments are often the result of stellar accomplishments as a lawyer.

“Damon is a very good lawyer,” said Bob Grand ’78, a Partner with Barnes & Thornburg LLP. “He is always prepared and well spoken. This is an extraordinary honor and one bestowed on very few Americans.” 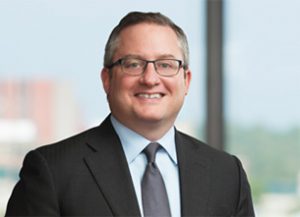 A lawyer at Barnes & Thornburg since 2000, Leichty specializes in commercial and product litigation. Most recently, he served as the managing partner at B&T’s South Bend, Indiana, office and also was an adjunct professor at the University of Notre Dame Law School.

Leichty’s path from Wabash to the U.S. District Court also gave a recent graduate a sense of the possibilities that lie ahead.

“Soon-to-be Judge Leichty’s appointment reinforces the fact that Wabash College produces incredibly successful and prominent lawyers and judges year in and year out,” said Erich Lange ’19. “The success of those alumni who have entered the legal field speaks for itself, and showcases to young men considering a profession in the law that they should seriously consider Wabash.”

The confirmation also gave Lange, winner of the College’s 2019 Junior Pack Medal which is given annually to a student who exhibits special promise in the law, something to shoot for when he begins postgraduate studies at Georgetown University Law School this fall.

“I understand and appreciate the legacy my fellow alumni have worked so hard to build,” he said. “I will strive to live up to those expectations.”