Richard Paige — Erich Lange ’19, like most of us at some point in our childhoods, grew up riding in the car between band concerts, baseball games, and other activities, changing uniforms in the backseat. Most of us outgrow the need to stay so busy—we pick one thing and search for excellence there.

Busy is still his normal, and he’s handling it all very well.

The North Coast Athletic Conference recently named Lange as the 2019 winner of the Don Hunsinger Award. He is the first Wabash student-athlete to claim it. He credits a childhood where he was constantly moving from one thing to the next – hence the need to change uniforms en route – as the foundation for what would become earning a league honor that spotlights academic achievement, athletics excellence, service, and leadership.

He was a Moot Court finalist in 2018, interned with the Legal Aid Society of Louisville, volunteered four years at the Boys’ and Girls’ Club of Montgomery County, and was a member of 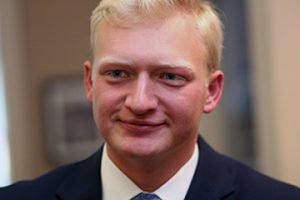 the Wabash Pre-Law Society, the Sons of Wabash, and served for two years as a freshman orientation mentor.

As a catcher for the Little Giant baseball team, Lange batted .393 as a senior, tied for the team lead with five home runs, and drove in 39. He was an all-NCAC pick and a second team Academic All-America selection.

It’s not easy to make such a resume look seamless, but Lange accomplished the feat.

“I’ve always been able to take on a lot of things at once, and I’ve admired people who have a seemingly perfect balance in every aspect of their life,” he says. “Being busy with extracurriculars and balancing that with school has been my normal. When I got to Wabash, I knew I had the opportunity to not only play baseball and work hard in the classroom, but to be involved on campus as well.”

Lange leads by example, hoping to encourage others through action. Those actions may most often come into play when it comes to service.

“Sometimes I get busy or would rather do other things, and it’s hard to find the motivation,” he says. “Being the change you want to see in the world requires that you get off the couch and do it. To me, a vital part of character is acting on your beliefs. I believe in helping others, so I ought to do just that.”

The Hunsinger Award capped a spring that saw Lange bestowed with a number of accolades, including the IAWM Scholar-Athlete award, King Prize in German and the Lipsky Award in political science.

I asked Lange, who heads to Georgetown University Law School in Washington, D.C., this fall, how he was able to do it all. He gave me an answer right out of the front seat of his childhood.

“I have to credit that to my mom,” he says. “She always wanted me to be well rounded.”