Patrick Bryant ’16 – Since it was announced prior to the 2014-2015 school year, the Gentlemen’s Classic has been pitched as being more than just a football game between Wabash and Hampden-Sydney.  It was about the all-male education and how we can draw from one another and learn from one another in the education of young men.  This past weekend, Fabian House ’16, Scott Purucker ’16, and I traveled with the Little Giants football team to engage in a discussion with members of H-SC’s student leadership.  I walk away proud and thankful for all we have by what I witnessed, yet inspired that we can do better. 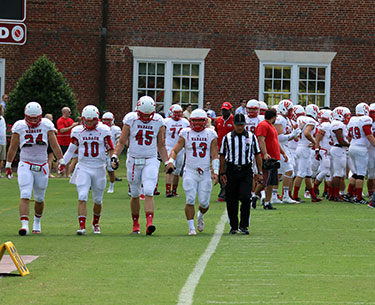 Fabian, Scott, and I met with Hampden-Sydney’s Student Body President, the chairman of their Student Senate (which is comparable to Fabian’s role), the president of their Inter-Fraternity Council, and the president of their honor court.  The notion of having an honor court has deep roots in the history of Hampden-Sydney.  Although our Gentlemen’s Rule and their Honor Code are very similar, we don’t have that sort of infrastructure here at Wabash.  I admire their student leadership for taking a stand, often times against friends and close classmates, for the sake of upholding that honor code.  That can’t be an easy task.

I spent a good majority of the first half of the game talking with Josh, the chairman of their Student Senate.  Despite having closer to 2,000 students, Josh was surprised that we have the funding dollars that we do to put towards clubs, activities, and student programming.  Some of the events he outlined at Hampden-Sydney were a formal ball that they hold for the student body, faculty, staff, and alumni, and also a large philanthropic event they put on each year.  That was two thought-provoking “gaps” for us as student leaders to consider.  The notion of having a campus-wide formal at Wabash isn’t a new one and it’s something that’s been discussed in my time as Treasurer and now President of the Student Body.

The idea of having a philanthropic event is also very interesting to me.  Our financial policy says that student funds cannot be directed to a charitable organization.  The idea is we want to subsidize costs for groups that want to “do” philanthropy, but we don’t want to allow a free-for-all in allocating funds to various organizations.  That said, I think it would be a great idea that we put our manpower and energy behind an event.  Prior to coming to Wabash, I spent four years on the Executive Committee for our high school’s Dance Marathon, raising $1 million over four years for Riley Hospital for Children in Indianapolis.  Philanthropy is an area for growth and I come away inspired that we can do better as a student government in helping students “live humanely.” 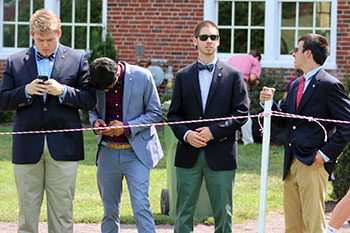 The weekend was a great one and the opportunity for me to interact with our D.C.-area alumni and trustees, interact with their student leadership in-person, and participate in the radio broadcast during the second half.  It was a great game day atmosphere at Hampden-Sydney, but to see the apathy of their student body to the game and their failure to wear their school color, showed me that we have a lot to be proud of and thankful for in Crawfordsville.  You can look at any photo from any game day at Wabash and find a full crowd emblazoned in scarlet.  Not so at Hampden-Sydney.  Instead lots of blue blazers with their backs turned to the game.  Wabash cares and proof can be found no further than in the crowd that supported our Little Giants this past Saturday.

Sunday was a day I won’t soon forget.  I’ve traveled twice before to Washington D.C. and twice made the trip to Arlington National Cemetery and the Tomb of the Unknown.  Moved to tears doesn’t begin to explain it.  Without discrediting our players in anyway, I think you can ask any of them about what that Tomb means and any football game pales in comparison.

When I look back on the weekend, I was asked a number of questions by members of the H-SC community and it humbles me to think I was an ambassador for our student body.  When I explained our campus, our culture, our way of life, I quickly realized that I could sum it up my pride as a Little Giant by a lot of the actions off the playing field that I witnessed this weekend.  Everywhere we went, whether at a hotel, a restaurant, or on our flights, the behavior of our players was noticed by just about everyone who came into contact with them.  I heard countless times “please” and “thank you” and “bless you” when someone sneezed, I saw doors being held, guys pitching in and grabbing bags for one another, I saw so much of that in anticipation of and return from a 35-3 thrashing of the Tigers.  I can’t tell you if it’s a product of a single-sex education or a small school, but there’s something special here at Wabash.  Although it didn’t take a trip to Hampden-Sydney for me to realize that, it gives me a great deal of pride that the people we came in contact with at H-SC and along the way, may have a sense of what it means to be a Little Giant now too.