Clayton Randolph is a senior at Wabash, majoring in History. During the summer of 2014 he interned in the Communications and Marketing Office. This summer he is interning at Angie’s List in Indianapolis. He serves as the radio play-by-play voice of Wabash football road games and sideline reporter for home games. He handles play-by-play duties for basketball and baseball on both radio and internet video. He is entering his second year as the General Manager of 91.3 FM WNDY—Wabash’s student radio station. He has his own radio show and announces high school sports on Thunder 103.9 WIMC and 106.3 WCDQ in Crawfordsville.

Clayton Randolph – When I started applying to colleges during my senior year in high school, I had no idea where I wanted to go. I was certain Wabash was not on the list. I was applying to many schools with a Journalism/Broadcasting major in Indiana: Butler, Purdue, University of Indianapolis, DePauw, and Ball State. Wabash was an after-thought. It was easy for me to overlook them. I had grown up in Crawfordsville, my family was here, and most of all, it was all male. Those factors for an 18 year old were huge. Had it not been for my mother encouraging me to apply, I may not have ended up here. It’s fun to look back at that journey and question what was actually going through my head.

And now as I enter my senior year, it seems like yesterday I was being rung in, meeting new people, and dreading what Wabash was going to be like. There’s no doubt Wabash challenges you every second of every day, but it has also provided me with opportunities that few get to experience while in school, and for that, I am extremely thankful.

It was after my mother and I attended Top Ten day everything came into perspective. The alumni support offered at this institution was out-of-this-world. And to this day, it still amazes me. I have always been interested in broadcasting—particularly sports broadcasting. I knew Wabash did not have a major in this area. It still doesn’t. I trusted the alumni support system to help get me where I wanted to go. We do have many alumni in the Journalism field, and my family and I knew that relationships were of high importance when finding a job. So I gave it a shot. After my first week, I was put in contact with Sports Information Director, Brent Harris, who gave me an opportunity to immediately begin broadcasting Wabash sports. 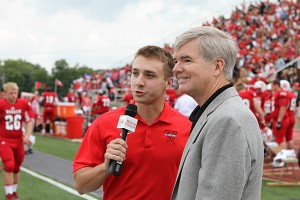 Other institutions wanted me to apply, or interview, or wait until I was older to even handle a microphone—not to mention there were hundreds or thousands of other kids waiting in line to get their chance at developing into the next Al Michaels. As a freshman at Wabash, I got the opportunity instantly. I didn’t have to wait. The support system was already taking shape. And now after three years, many road trips, and gallons of Jenny’s ice cream later, Brent and I have forged a friendship I hope will last for years to come once I graduate—all while refining the necessary skills to excel in the Journalism field. You don’t find that everywhere, but at Wabash, it’s a staple—a commitment to young men. If it wasn’t for many of the employees in the Communications and Marketing Office, I still would not be where I want. Kim Johnson, Howard Hewitt, and Richard Paige have been instrumental in preparing me for my years after Wabash. And just like Brent, those friendships will last forever, because that’s what Wabash takes pride in. That’s why you come to a school like this. You meet people who care and want to help get you where you want go. It’s why Wabash is unique and stands out among its peers.

To this day, I can walk into any of their offices and have a conversation about anything. It’s hard for me to picture doing that any many other places. You’re going to make friendships with people wherever you go, but Wabash has built a reputation on these relationships. Yes, we educate doctors, lawyers, CEOs, etc. but those alumni will agree—friendships and relationships are the most important thing about Wabash and pushing you to do great things. If you don’t reach out and use the resources afforded to you, there won’t be as many friendships. Just in the past few years, those friendships have given me the chance to meet an alum working as a Producer for CBS News, a sports broadcaster for the Indiana Pacers, an FBI agent, the President of the NCAA, and an ESPN personality. Again, had I gone elsewhere, most of those opportunities would not have been present. Even traveling with the football team to broadcast their games would not have been a possibility.

People will tell you when finding a job, it’s about who you know. At Wabash, you have a chance to meet many alumni in various roles across the country. They are there for students to use and reach out to—because at one time, they were doing the same thing, and having the same struggles. This probably reads like recruitment mail—it’s not. Nobody forced me to write this, I wanted to share how important Wabash is. When you come to a place as special as Wabash, don’t sell yourself short. Go after it. What’s the worst that could happen? Wabash is there to help you—be sure to use it. And, personal thanks should be extended to those who have helped me.