Steve Charles—“You just witnessed the single most amazing moment of my life.”

I should have seen them coming. It was the second day of the three-day intensive workshop and Lucas had just spent more than an hour listening and taking notes while five of his peers and Dan Simmons ’70, the College’s most dedicated and successful professional writer, critiqued Lucas’s short story, “Shatter.” The students were honest, meticulous, tough, and helpful with both their praise and criticism.

Simmons was taking it down to the word.

“I’m going line by line here, but that’s what I do when I like a story,” he said before he offered specific suggestions and wondered aloud about word choices to improve the piece. Lucas listened intently, jotting an occasional note for his revision, determined to make the story better. When Dan finished, fellow student writer Nick Gray ’15 offered his own suggestions.

Then Dan looked at Lucas and said, “God, this is good. Congratulations.”

Lucas calmly nodded his head and joined the students walking out the door for coffee and snacks. A few seconds later, though, he returned to the table. This young man, who a day earlier admitted he’d wanted to be a fiction writer since he was a kid, turned to me with eyes as wide as Christmas morning and said it: “Mr. Charles, you just witnessed the most amazing moment of my life.”

At dinner before the sessions began, workshop co-organizer and Wabash English professor Eric Freeze had heard more about Dan’s career before he became the professional writer of science fiction classics, mystery, horror, fantasy, and mainstream novels. For 18 years Dan was an elementary school teacher, creator of the APEX program for gifted and talented students. But even back then, Eric learned, Dan would tell stories, beginning a tale at the start of the school year and spinning it daily in such a way that kids who were sick and supposed to be home showed up at class anyway so they wouldn’t miss anything.

So the next night at a public reading that kicked off the workshop, Eric referred to Dan’s penchant for in-class storytelling, concluding: “It’s an astonishing story, not only for how it reveals Simmons’s talents for narrative, but also for what it says about his abilities as a teacher. What it also taught me, what it continues to teach me, is that narrative has a transformative power. It locks us together in a dance—teacher-student, author-reader—and we are changed by that interaction. It is an ancient thing, this storytelling, which dates back to our ancestors, like fire. I’ve seen Dan bring that fire now to our students, and I hope over the next few days of the workshop, to continue to see it burn.” 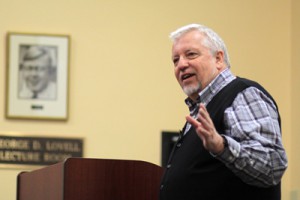 Then Dan recalled how he wrote in his spare time for years, how he was about to give up when he “gave it one last shot,” attended one last writer’s workshop, and was ‘discovered’ by the writer Harlan Ellison, who told him, “You know you’re a writer when another writer tells you you’re a writer, and you, Simmons, are a writer.”

Then he shared why he was at Wabash that week, volunteering his time, despite the fact the proofs for his novel, The Abominable, were late and waiting on his desk back in Colorado.

“I’m looking for a few good men to be professional full-time writers,” he said, noting there are fewer than 500 such writers in the world. “The world needs writers, and we need a Wabash novelist for the 21st century. I believe that Wabash, the quintessential liberal arts college, is the perfect incubator for the 21st century novelist.”

He said the move from amateur to publishable professional writer was analogous to an electron moving from one orbit to another, a quantum leap very few have made.

Then he and the students went to work.

They shared favorite writers, discussed character and the free indirect style described in James Woods’ How Fiction Works, read passages from Hemingway, James, Flaubert, and others (with Simmons interjecting historical background from each like the rabid researcher he is). They broke down paragraphs by thought units, analyzed word choice and sentence cadence. Dan showed the proper format for submitting manuscripts, the mistakes editors look for to reject stories.

After the first critique circle (to gain admission to the workshop, each student had submitted a manuscript) I could tell something special was happening. Eric has been developing a community of writers since he arrived at Wabash five years ago, training them to be generous with both their praise and detailed criticism, to be thick-skinned enough to hear those things about their own writing, separating themselves from their work so they can get better at the craft.

“I’m thrilled when one of my students says they’ve been fiddling with a scene or a sentence until they felt like they were going blind,” Eric said when he received tenure last year. “Something clicks. When they start to feel that compunction, that drive to push themselves to get better, that’s when I know that they’ve become writers and no longer students looking for a grade.”

So the professor had his students ready. Simmons seemed pleasantly surprised.

“That was damned good,” he said after the first circle. “I think you’ve done this before!”

He told Stephen Batchelder ’15, the writer of that piece: “Reading this story made me realize I had to do this workshop, not because you needed my help, but because this story was bold. You have a powerful voice, and a lot of courage.

“There’s some fire in every story this group submitted for this workshop, and for you, that fire was this boldness.”

The story wasn’t finished; it has a long way and many revisions to go, as do all the pieces. But in their critiques Dan and the students had pointed ways forward, and Stephen seemed eager to rewrite.

It was the sort of interaction those at the College who know Dan have envisioned for years. Folks like Alison Kothe and Pat White knew that, regardless of his continued financial success (Dan’s book, The Terror, is in development for a series at AMC), the best gift the College’s greatest practitioner of the art and craft of writing could give was his time with our students.

That goes beyond teaching. When I returned to photograph the sessions after what was supposed to be a short break, I found Dan, the six students, and Eric at a round table in Detchon, laughing and sharing stories way past the allotted 15 minutes. A similar scene was repeated at lunches, with Dan’s wife, Karen, present, and at the final dinner on Saturday night.

Participant Ryan Horner captured one of the intangibles of such moments when he noted, “the workshop took an inaccessible alumnus celebrity and made him accessible to us. We spent three days learning from the best, and then in our free time held wide-ranging conversations that revealed the down-to-earth personalities of Dan and Karen.”

In one of the those conversations, students heard how Karen had encouraged her husband to keep writing, even when he was ready to quit, how she was his not only his best friend but most trusted reader. “Maybe some day you will be so fortunate to find that person,” he said.

Chet Turnbeaugh wrote: “Working with Dan has encouraged me to continue writing—not only the short story I submitted for the workshop, but, in general, to push towards new creative horizons that expand the possibilities of my imagination.

Christian Lopac wrote: “The things we learned showed me the challenges associated with writing, but the workshop also illustrated many of the things necessary to make the ‘quantum leap’ Dan spoke of.

Eric summed it up: “In his Thursday night talk, Dan mentioned that improvement in writing usually happens in creative spurts, like an electron jumping a valence to a higher orbital plane. I saw this improvement firsthand during the workshop. By the end of the experience, Dan was saying that students were producing publishable work, probably the highest compliment that a writer can pay to a student. The workshop was so successful, with many of the students saying that this was the most intensive and helpful experience of their careers, that we anticipate continuing to offer these workshops in the future.”

And Dan wrote in an email after his return to Colorado, where he was working through the frustrating task of responding to copy edits to his novel The Abominable: “That frustration fades away when I think of how much fun the three days with the students were . . . and what great young men they are. I’m honored and humbled to have had the chance to work with them.”

What’s next? Dan has a couple of generous and once-in-a-lifetime ideas, and both he and Eric have imagined a weeklong workshop for a time when the College is not in session, addressing a frustration voiced by Zromkoski, who after the encouraging yet challenging critique of his story wanted to get to work on a revision immediately, but admitted he had a 20-page paper, Japanese homework, and a yearbook to finish in the next few days.

‘What if we had an entire week to focus only on our writing?” he wondered aloud.

Right now, though, I’m savoring what I witnessed last week. I’ve seen inspiring things during my time at Wabash. I was 20 feet from Kurt Casper when he grabbed Ryan Short’s tip to the end zone and won the Monon Bell with “The Catch.” I was here when the College cancelled afternoon classes and converged on Detchon Center for the first Celebration of Student Research, Scholarship, and Creative Work. For more than a decade, every time Bill Placher wrote a book, I got to be one of the first to interview him, a personal lesson in theology and faith from a master writer.

But I’m with Lucas on this one: In my life at Wabash, I just witnessed the single most amazing moment.

Cheesesteak Event A Success
The Bloom of Remembrance