Jim Amidon — When Wabash College senior Rashaan Stephens met with me about six weeks ago, he came with an idea to do a fund-raiser for the Montgomery County Free Clinic. So I sat down and talked with him about all the little details that would need to be planned in order for his event to be successful.

Most of the time when a fund-raising event involves a million little details, the students get overwhelmed. With the burdens of their classes, sports, and activities, the fund-raisers tend to be good, but often unrealized ideas.

I should have known Rashaan would see his idea through to a successful conclusion. See pictures from Saturday’s event here. 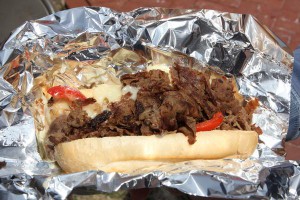 Rashaan is from Philadelphia and he’s proud of that fact — so proud that his idea to raise money for the Dr. Mary Ludwig Free Clinic was to sell authentic Philly cheesesteak sandwiches. He told me about the famous places in Philly where locals stand in line for hours to get a sandwich, and said he wanted to introduce his adopted hometown of Crawfordsville to what he called “the greatest sandwich in the world.”

You have to meet Rashaan to get a sense of his enthusiasm — for travel, life, studies, and Philly cheesesteaks. He’s like a human tornado who is always on the go. Our conversation about the fund-raiser was a blur. We talked about all those million little details in minutes, and when he left, he was literally undaunted.

“Okay,” he said. “I’ll be in touch when I get everything in place.”

I didn’t hear from him for about 10 days so I thought the pressures of mid-semester probably got the best of him. I was wrong. He spent that time meeting with our food service partner, Bon Appetit, and lining up workers from the organization he leads on campus, the Muslim Students’ Association.

Everything came together perfectly on Saturday, including the season’s warmest day of the year so far. Under bright sunshine, Rashaan, Tyler Griffin, the MSA, and the Malcolm X Institute of Black Studies set up tables outside the Scarlet Inn and decorated the whole area with red balloons. 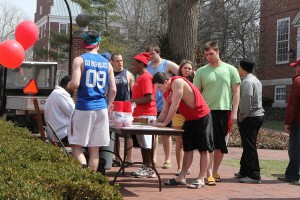 I arrived shortly before the event started, and Rashaan was busily running all over campus. He couldn’t even stop long enough for a photo. But I found Bill Doemel, who is executive director of the Free Clinic, and we talked about the significance of the fund-raiser.

The clinic will provide free healthcare to uninsured people of Montgomery County, and over the last five years, a dedicated group of volunteers have managed to raise $300,000 in funds to match a $900,000 grant from North Central Health Services. Located on Mill Street near Milligan Park, the clinic is set to open mid-summer. 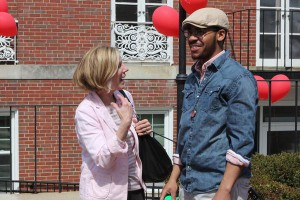 Right now the volunteers and board members are raising operational funds. That’s what Rashaan and the MSA brothers wanted to support.

Selling five-dollar cheesesteak sandwiches may not seem significant, but think about the symbolism:

Rashaan Stephens is a senior from Philly on his way out of Crawfordsville, yet he wanted to leave a footprint

Rashaan Stephens is a Muslim. The Free Clinic is growing out of the long-standing Christian Nursing Service’s Well Baby Clinic and Adult Clinic.

The Muslim Students’ Association wanted to demonstrate the true tenets of Islam, and those students worked tremendously hard to show they care deeply about this community and all of the people who live here.

Local chef Adam Laskowski manned the flattop in the Scarlet Inn and made it look like he’d been slinging Philly cheesesteaks all his life.

Let’s talk about those sandwiches, too: Beef steak and fresh-baked rolls flown in from Philly. You got your choice of provolone or Cheese Whiz, peppers or onions, or both.

I had mine with provolone and could not believe how terrific the sandwich was. As I sat in the sunshine with my wife, Chris (a Free Clinic board member) and Bill Doemel, I had a sudden urge to get another sandwich. This time with Cheese Whiz, at which Bill grimaced.

I returned with the slightly sloppier, bright orange cheese-covered sandwich and had it polished off in about 90 seconds, which included allowing Chris to sample two bites. It was even better than the first sandwich.

By this point, a large crowd had gathered and the fund-raiser was up and running. Several fraternities provided funds to allow all members to eat there Saturday afternoon.

We left about an hour into the event. Rashaan was still running around like a crazy man making sure every detail was covered. I asked Tyler Griffin how many sandwiches he had sold in that first hour. He laughed (he always laughs) and said, “I have no idea — this many” and he showed me his cash box stuffed with money that will soon help support our neighbors in need.

Needless to say, I left feeling exceptionally proud of Rashaan, Tyler, Nick Gray, and all the students who pitched in to make the Cheesesteak Festival a rousing success.