Howard W. Hewitt  – Adam Miller ’12 is pursuing his passion and hopes to inspire and convince others to do the same.

Miller climbed on his bike the morning of Aug. 1 in San Francisco planning to take approximately 60 days to pedal across the USA to New York City. Along the way he will stop at college campuses and elsewhere challenging people to pursue what interests them. 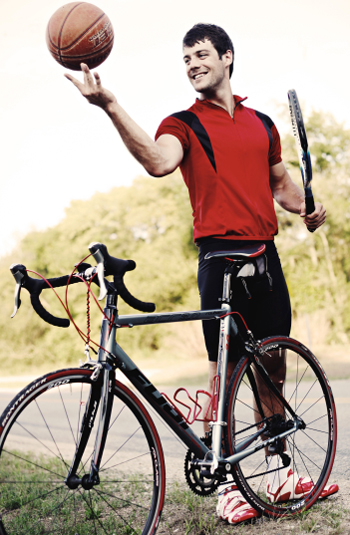 One of the publicity shots Miller will use during the ride.

Miller’s interests were stirred by his Wabash College experience. The two-year football athlete from Goshen, Ind, worked in Career Services most of his four years. During a summer College-funded internship in Greece, he noted kids who would play but had no ball for their sports. And by the way, that internship was partially arranged by Professor Emeritus of Classics John Fischer H70.

The following summer he worked at a summer camp in Florida where he interacted with children from economically-challenged areas. It was at that time he developed his idea for “Let’s Have a Ball” – a charity to provide sports equipment to children with needs.

II had a couple job interviews and pulled my name out of consideration bascially,” Miller said about his time after May graduation. “I said to myself if I’m really going to do this charity I have to do it wholeheartedly. Some of money raised may set up grants for anyone to pursue their passion.”

That is the second purpose behind his ride to raise money for “Let’s Have a Ball.” Go to his website PedalAdamPedal for more information and to support his efforts. Miller learned the value of social media while at Wabash and is using Twitter in a unique way to help raise money.

He spent time before the start of the ride learning about cross country cycling. He won’t be alone for the adventure. Derek Yoder ’11 will be driving along providing support, looking out for Adam’s safety on the bike, assisting with social media, and providing company.

Adam hopes to ride about 70 miles a day his fund raising goal is even bigger at $100,000. When he stops at college campuses and elsewhere, he’s going to do short video interviews he’ll post on his website and Twitter account.

” ‘Regardless of money, how would you pursue y0ur passion?’ ” I’ve seen classmates take jobs to pay the bills even though it’s not their passion – it’s just to pay bills.”